Today a prominent analyst based in London shared with King World News what will be the big shock of 2021.

January 6 (King World News) – Alasdair Macleod out of London:  Gold and silver have got off to a good start in the new year with gold up $44 on the first day of trading. Silver is also performing well, though prices have eased off today as the dollar’s trade-weighted index has rallied slightly. Comex volumes on both contracts have picked up. 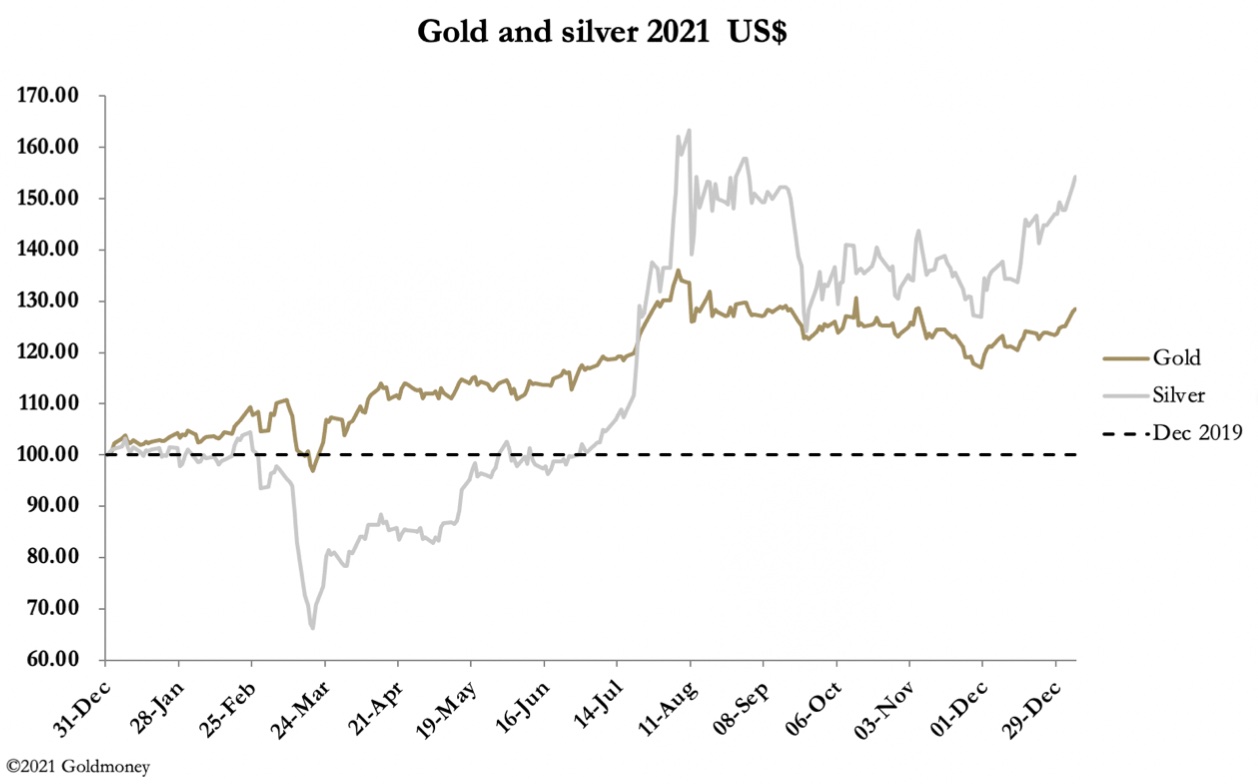 The chart above shows how silver has sprinted ahead of gold, to be up 54.3% since the beginning of last year, while gold is up a net 29%.

Normally I would bring you an analysis of specs and non-specs based on the Commitment of Traders report, but I’m afraid their release for 29 December is incorrect, so that will have to wait until Friday night. Let us put our charts aside and look at prospects for 2021.

When you look at how prices of commodities and financial assets are all rising, you can only form one conclusion, and that is the purchasing power of the dollar is falling. Some sample prices are shown in the table below, taken from the date just before the Fed went all-in on QE. 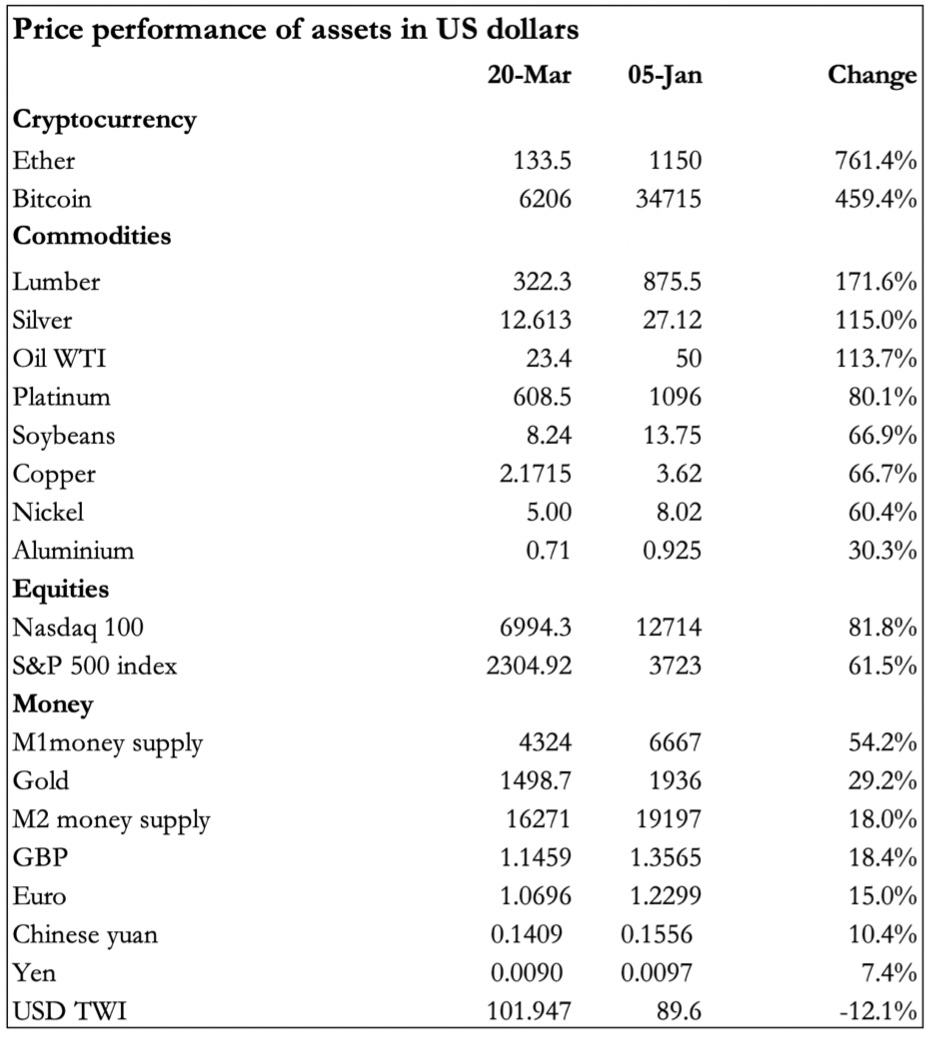 Cryptocurrencies have been spectacular, and given they are being bought because of their strictly limited future issuance while that of fiat currencies is rocketing, bitcoin and ether are the canaries in the fiat coal mine. Notice the remarkable performance of commodities as well: if one or two were rising we would put it down to specific factors for the commodities concerned, but when the whole complex is rising there can only be one reason in the current economic climate: the purchasing power of the dollar is falling. I have included silver under this heading, because until the gold/silver ratio falls significantly from here (currently 71) it is not yet being priced as money.

Equities, particularly American markets, have done well after a first quarter crash in 2020, when the S&P500 lost a third in less than three months. The driver here in the post-March inflationary environment has been $120bn of monthly QE…

That leaves us with various forms of money. US M1 money supply went hyper, rising an unprecedented 54% in one year. Gold’s rise of 29.2% was impressive compared with other years but has yet to reflect the commencement of hyperinflation for the dollar, which is the only description we can give to it. The dollar’s trade weighted index is down 12.1%.

BIG SHOCK: Prospects for 2021
The outlook is for a currency-destroying hyperinflation. In the second half of fiscal 2020 (March—September), USG finances went something like this, according to the Congressional Budget Office.

This was the first time that financing of Federal Government spending by QE (money printing) was greater than by tax revenue. Since then, there have been more covid waves, and it is clear that money printing will become an even greater source of government finance in 2021, while tax revenues continue to fall.

Add to that a developing economic slump, contracting bank credit and cross-border trade disruption, then covid-related money printing is just the start of it. It is becoming a racing certainty that the global banking system will collapse in the near future as a result of high operational gearing and non-performing loans, putting further burdens on the Fed and the US Treasury. Unless they stand back and let the economy sort itself out — which is what they should do but cannot — hyperinflation is likely to destroy the dollar and all other fiat currencies with it…

My concern is that the Fed and other leading central banks have been doing what John Law did in France in 1720. As a proto-Keynesian, he printed money to sustain financial asset prices of his Mississippi venture and his Banque Royale. It failed, and he went from hero to zero in about nine months. On that basis alone, we are now on borrowed time. The consequence is that as soon as the Fed loses control of the bond market the financial crash will take down the dollar with it.

I’m not going to talk gold and silver prices because they are irrelevant. Anyone who does not have physical metal held outside the banking system will suffer mightily from these evolving conditions.

ANOTHER WILD TRADING DAY: Plus Look At What Is Happening With The Bank Of England’s Gold