On the heels of the recent carnage in global markets, this warning indicator just hit the highest level in more than 5 1/2 years.

Highest Level Since April, 2013
December 13 (King World News) – Here is a portion of what Peter Boockvar wrote today as the world awaits the next round of monetary madness:  While there wasn’t much change in yesterday’s II stock market sentiment data, the AAII measure of individual investor sentiment got really scared. Bulls fell by a large 17 pts w/o/w to 20.9. That is the least amount of Bulls since May 2016. Bears jumped by 18.4 pts to 48.9, the most since April 2013.

I’ve said many times that because this data point is so volatile and fickle, only pay attention when it reaches an extreme and this week it’s at an extreme. Thus, strictly from a contrarian standpoint using this data point the stock market likely has seen its bottom in the short term and could bounce further on any good news on trade or from the Fed. I emphasize though ‘short term’, which I’ll define as only relevant for the next few weeks into year end. Next year will be dealt with next year with all the big picture issues remaining.

Mario Draghi And His Legacy
Mario Draghi … is trying to thread the needle of no longer increasing the size of the ECB balance sheet but with the acknowledgement that the balance of risks “have moved to the downside.” He cited “weaker data reflecting softer demand” and “uncertainties from protectionism.” Their optimism on higher inflation is due to “rising wage growth” but they did trim by one tenth their 2019 inflation forecast to 1.6% from 1.7% and thinks that “significant stimulus is still needed to sustain inflation.”

Mario has gone to all ends of the earth to increase the cost of living for European citizens to around 2% per annum. They now have expended so much with a fat balance sheet of $4.6 Trillion euros ($5.3 Trillion, bigger than the Fed’s peak level) and negative interest rates that what they will do in the next economic downturn is beyond me. On his worries about economic growth has the euro down slightly after being up prior to his comments. European bond yields are all lower. Details on the reinvestments next year will come later today.

Finally, in response to a question, Draghi implicitly acknowledged that he’s flying by the seat of his paints at this point as he said he has “Continuing confidence with increasing caution.” As he has less than one year left in his position, his legacy is on the line.

John Murphy And Bespoke Investment Group Weigh In
A portion of today’s note from Jeffrey Saut, Chief Investment Strategist at Raymond James:  Turning to the equity markets, while everyone is looking at the S&P 500, the equal-weighted S&P 500 has quietly retested it February low in what appears to be a double bottom (see chart below). 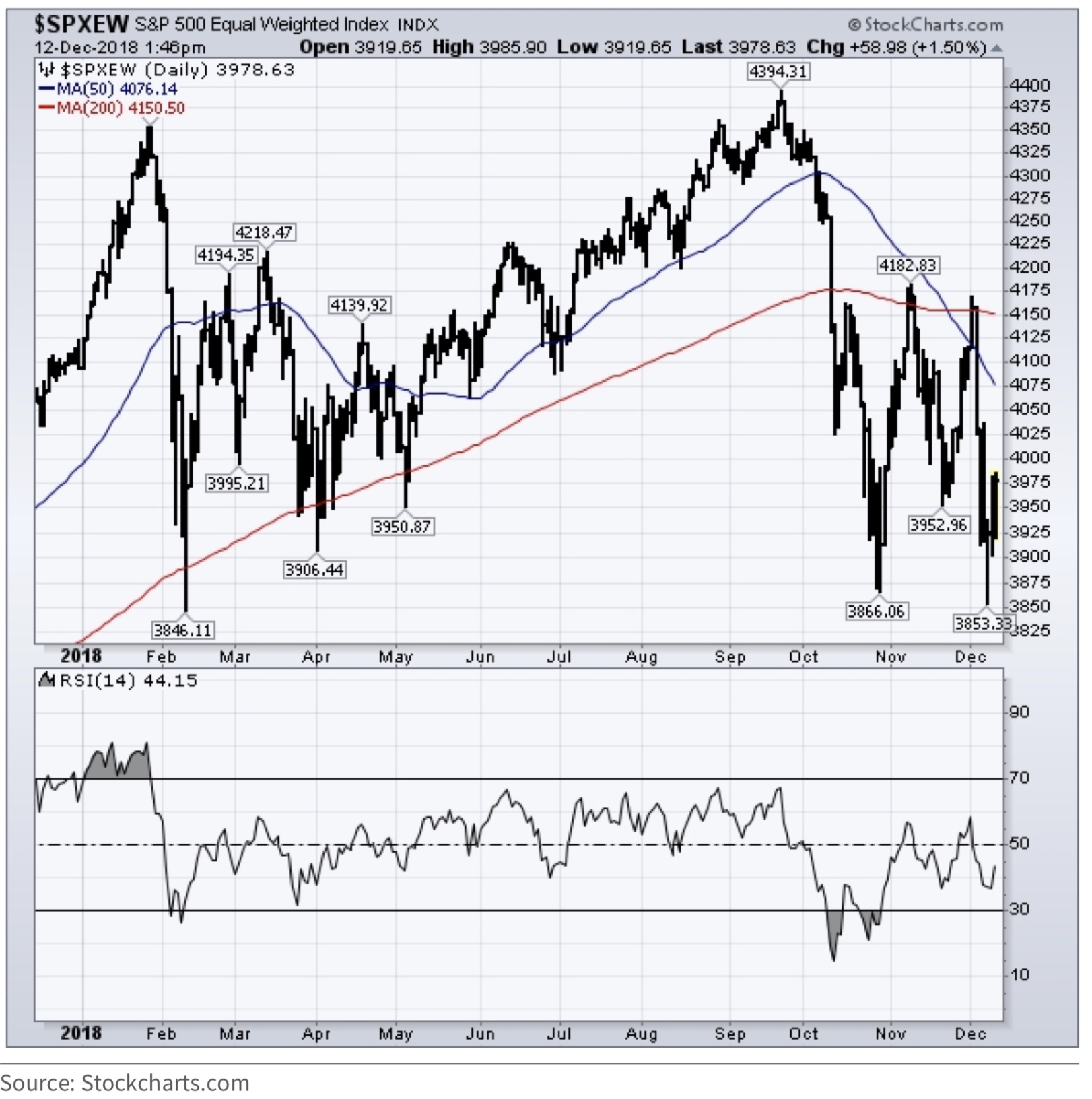 “The S&P 500 Equal Weighted Index is trading within 7 points of its February intra-day low at 3846. In my book, that’s close enough to qualify as a retest of a previous low. As its name implies, that version of the S&P 500 gives less weight to larger stocks and more to smaller stocks. And since smaller stocks have been much weaker this year, it may be giving a more realistic picture of the market as a whole. And it suggests that the February lows are already being tested and appear to be holding.”

And then there was this from our friends at Bespoke Investment Group:

“After a big positive reversal Monday and a big negative one on Tuesday, US equities have been trading steadily higher as we head into the final hour of the trading day. By themselves, positive or negative reversals tend to occur much more frequently in market downtrends than uptrends. However, occurrences of these types of reversals in opposite directions on back to back days have been much more common at or near market lows than throughout the course of a downtrend.”

KWN has released the powerful and timely audio interview with Andrew Maguire and you can listen to it by CLICKING HERE OR ON THE IMAGE BELOW.