Ahead of the US election, this is the world’s biggest crowded trade.

November 2 (King World News) – Danielle DiMartino Booth at Quill Intelligence:  It started with the end of the Studebaker. In December 1963, the failed U.S. carmaker closed its South Bend, Indiana plant, an event that heralded the implosion of its pension plan. Defaulting on its obligations left its former employees’ retirement safety nets in tatters. Incited, United Auto Workers’ president Walther Reuther led a movement to backstop pension assets that culminated in the Employee Retirement Income Security Act of 1974. Employers could now be sued for restitution if they failed to meet their fiduciary responsibilities. The reform crusade didn’t end there, though. In 1978, Congress passed the Revenue Act which included a provision, section 401(k), that allowed employees to defer taxes from bonuses and stock options. Three years later, the IRS ruled favorably on this new plan. With employers enticing workers with a match, adoption of the plans was rapid and widespread.

The 401(k) was never designed as a replacement to traditional defined benefit (DB) plans but rather a supplement. Try telling that to employers. Since the 1981 IRS ruling, the percentage of employees covered by DB plans has crashed from 60% to 12%. And, according to the Pew Charitable Trust, 53% now take part in a 401(k) while 35% are not covered by a plan of any kind. The Pension Protection Act of 2006 turbocharged employee participation by allowing 401(k) plans to adopt a default opt-in provision. The catch was the requirement to provide a “Qualified Default Investment Alternative” in order to use the opt-in default.

An overwhelming majority of employees chose “target date” funds, designed to automatically rebalance portfolio holdings as an employee approaches his or her retirement age. As per Cerulli Associates, nearly 60% of 401(k) plans are directed to target-date funds. QI’s colleagues at Evergreen Gavekal recently highlighted a report by Vincent Deluard, Director of Global Macro Strategy at INTL FC Stone titled, “Swimming with the Target-Date Whale; Short for Halloween, Long for Christmas?” Appealing to our lack of conviction in coincidence, Deluard notes that, “the four most recent corrections ended in the last week of the quarter, and three of them ended on the same day – the 23rd.” March 23rd, the day Jerome Powell fired his bazooka, corresponded with the $2.3 trillion in target-date funds rebalancing out of bonds and into stocks to keep demographic balances in check.

As for investors with holdings in IRAs and traditional brokerage accounts, with a hat tip to QI friend Jim Bianco, the U.S. has more than 12,000 investment adviser firms who employ more than 400,000 Registered Investment Advisors (RIAs). More than 35 million investors use these services. As for the investments, 88% of RIAs recommend ETFs for their clients. Incredibly, Bianco observes, “No other investment vehicle has a higher usage, not even cash at 83%!”

The bottom line is that the vast majority of U.S. retail investors are invested in the same manner. Call it the world’s biggest crowded trade…

The year 1981 not only opened the 401(k) floodgates, it was also the last time there was a single-digit price-to-earnings multiple on the Standard & Poor’s 500 stock index, the world’s benchmark. As interest rates have fallen in lockstep, and despite major bumps along the way, there has never been a better time to be invested in the U.S. stock market. The Federal Reserve has made sure of it and given investors deep comfort in automated, passive strategies.

The trick now will be sustaining the confidence game. That’s easier said than done against a backdrop of falling bond and stock prices and waning faith in the Fed’s power to shepherd the real economy.

Despite the flood of liquidity and trillions in target-date and passive funds pumping up stocks since the March lows, upper-income buying conditions have yet to recover for anything but homes (left-hand chart). 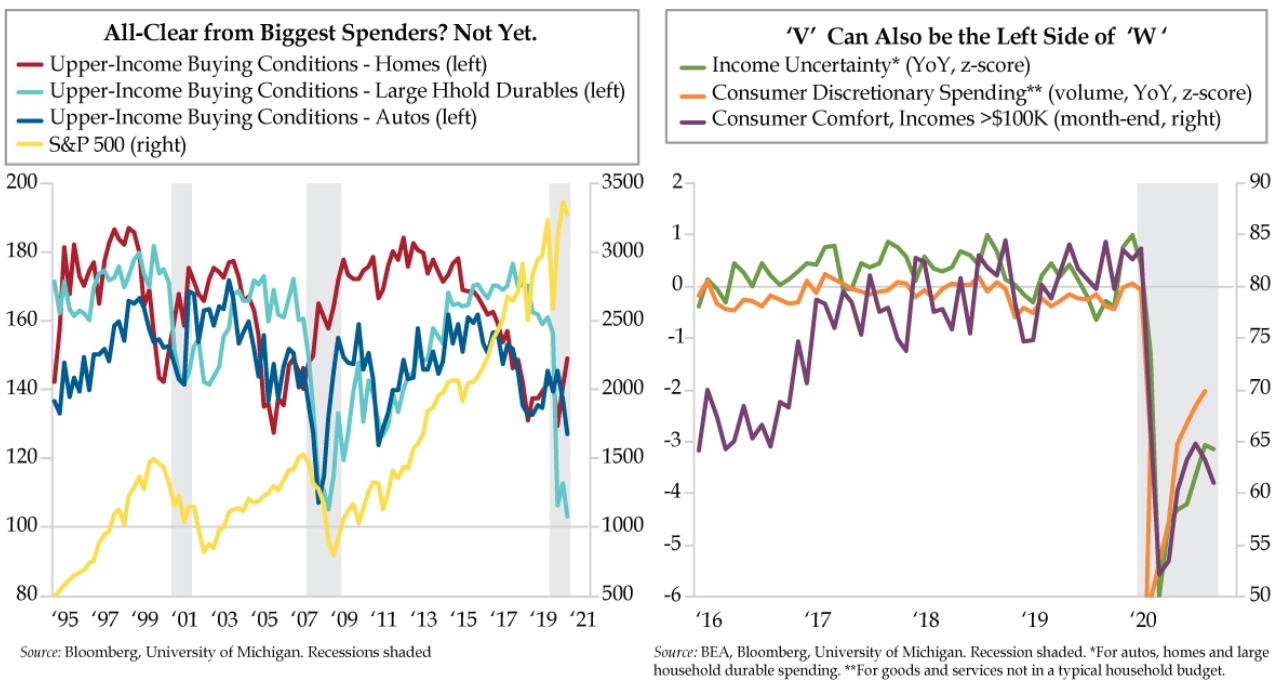 As we’ve covered comprehensively, it would have been difficult for housing to not rebound given the combined firing power of the FHA, Fannie Mae, Freddie Mac and the Fed feeding rampant speculation that’s driven up home prices to record levels of appreciation.

Regardless of the election outcome, the risk of a rapid double-dip recession is growing with every day that passes. The income uncertainty as it applies to the purchase of large durable goods, autos and homes across the income spectrum (green line) has stalled and is flirting with turning into a “W.” The same can be said for confidence among workers who make $100,000 or more (purple line). And finally, spending on discretionary goods – what we want as opposed to necessities – looks as if it could be rolling over (orange line).

It’s worth adding that the U.S. economy does not exist in a vacuum. As evidenced in the price of crude oil, the renewed global slowdown will act as a drag. And to state the obvious, the virus will slow spending. Despite reporting blowout top-line growth, the mighty Amazon warned that spending on big ticket items was most at risk. After revenue growth of 37% in the third quarter, it forecast its top line could grow by as little as 17% in this year’s final three months, a.k.a., the critical holiday shopping season.

Because of the way investing has been blindly automated, the 401(k) and other passive strategies will likely be put to the test after a remarkable 40-year run. It’s with good reason that cash, cash equivalents and the ability to hedge are trading at a premium.

HIS GREATEST INTERVIEW EVER: Sean Boyd predicts $3,000 gold and shares with KWN listeners around the world the big game-changer in the gold market in his greatest interview ever. To listen CLICK HERE OR ON THE IMAGE BELOW.

This Is Why Gold Is Surging Even Higher, Plus Higher Inflation Is Coming, China/US War Of Words And Commodities