With the FOMC statement taking center stage today, this event just ignited the most important trend of 2018 that is mega-bullish for gold.

The US Dollar Breakdown
By Mishka vom Dorp, Senior Portfolio Manager, Sprott USA
January 31 (King World News) – Recently, we saw the dollar index (the DXY), which measures the USD against a basket of the world’s major currencies, break below its support of 91 for the first time since January of 2015. This event may signal the most important trend of 2018: the breakdown of the dollar (see chart below). 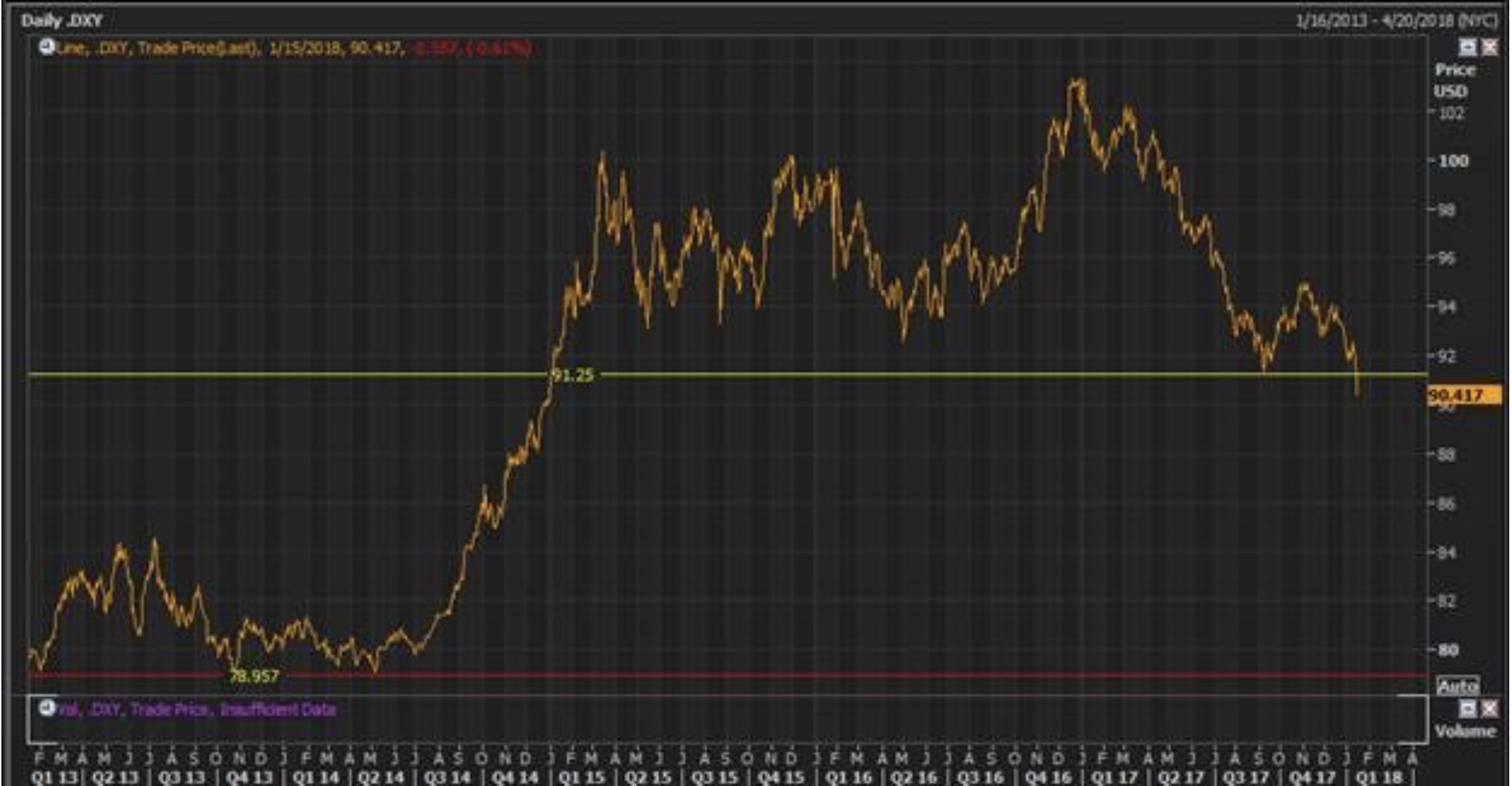 The recent drop of .96 percent was the second largest drop in over a year and caught many traders by surprise given the recent strong U.S. retail sales data which increased their expectations of a rate hike in March to 75 percent.

…Looking back over the past year, one can see there is a strong inverse relationship between gold and the dollar which has only strengthened over the past month. I believe the recent slide below support levels opens the door to a rally that could be similar to what we saw in the early 2000s, when the DXY broke down from 120 and fell all the way to the low 70s in 2008 (see chart below). 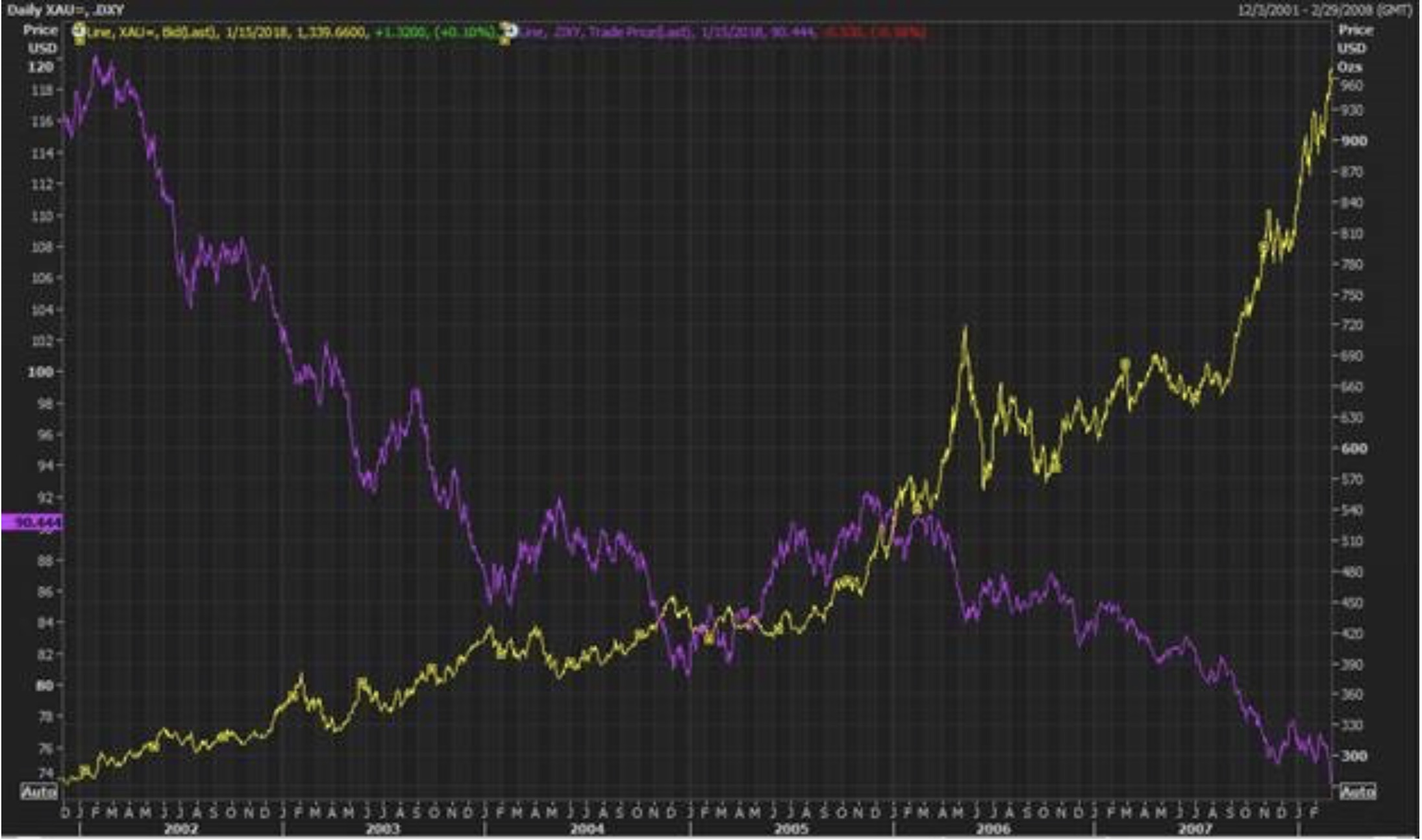 So where does gold go from here?
There are two major factors which I believe influence gold. The aforementioned dollar and real interest rates, which is the nominal rate set by the Fed minus inflation. A weaker dollar obviously means a stronger gold price in dollar terms but the real rate’s influence is a bit more convoluted. Since both Treasuries and gold are seen as safe-haven assets, investors who are worried about market risk have a choice to park their savings in a “risk free” asset that has a yield (Treasuries) or one that does not (gold). If real rates are positive, investors will likely favor Treasuries, since they provide a yield above that of inflation. However, when the inflation rate is greater than or equal to the nominal rate, investors prefer gold, since parking cash in Treasuries yields a negative return.

However, despite the Fed’s efforts to manufacture inflation through historically low interest rates and large-scale asset purchase programs, we still have yet to see the Consumer Price Index (CPI) rise significantly, hence real rates have remained in positive territory. The best way to view real rates is by looking at the yields of Treasury Inflation Protection Securities (TIPS), where the principal is adjusted up and down based on CPI data. Looking at the 10-Year TIP, one can see the inverse relationship of TIPS to gold (see chart below). 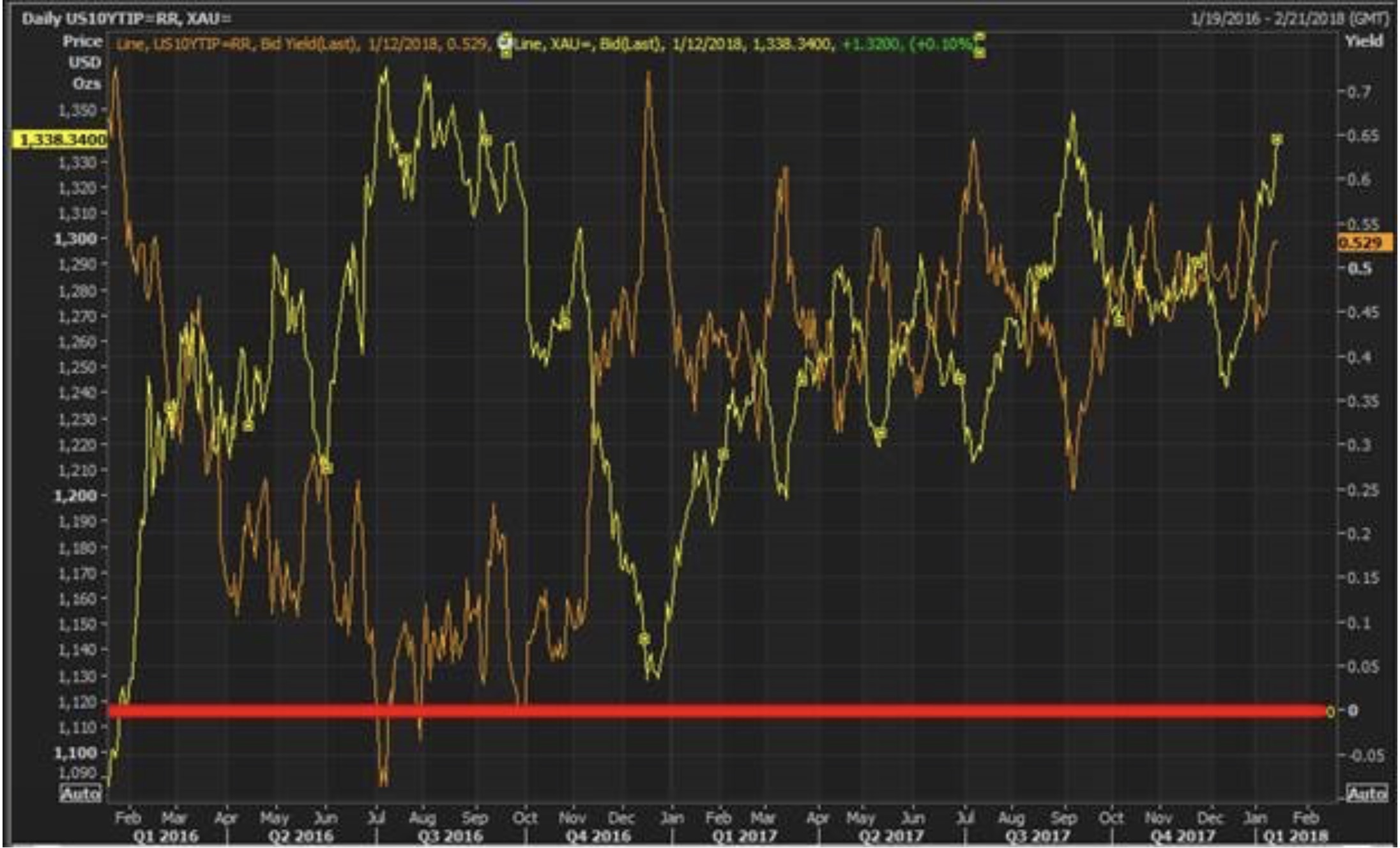 What arguably sparked the end of the 5-year bear market in gold was the fall of the TIPS yield from 0.7 percent in January 2016 to negative real interest rates by July 2016. Since then, the 10-Year TIPS yield has bounced off the bottom to .53 percent. With the recent decline in the dollar, from a U.S. consumer’s perspective, foreign goods and services will now cost more than they did a year ago considering the dollar has declined over 12 percent. With over 27 percent of the of the U.S. GDP made up of imported goods and services, the effects will be felt far and wide. Though inflation takes time, there is a very good chance we could see real interest rates begin to decline over the coming year.

Though it is likely the Fed will attempt to counteract inflation by raising rates, it’s anticipated that President Trump will stack the deck with more dovish board members with the three current vacancies of seven total positions. From 1945 to 2001, the average economic expansion following a recession in the U.S. was just shy of five years. We are now into the ninth year of expansion and it is likely the Fed will have very little room to adjust rates down without going into negative territory once the next recession hits.

For now, I believe we will continue to see a weaker dollar, more inflation and a less aggressive Fed. This combined should all be positive for gold and the miners that extract the yellow metal.  The bull market which started in 2016 is now once again in full swing after a lackluster 2017. For those investors sitting on large cash positions, I believe now is the time to consider deploying funds into quality explorers, developers and producers.

King World News note:  Downturns in the US dollar run in 7-year cycles.  If the dollar has topped, there will be many years of rising gold prices and a weaker US dollar.  Because the XAU and HUI Indexes are near an all-time low vs gold, this will set the stage in coming years for a massive outperformance of the high-quality explorers, developers and producers vs the price of gold.  Use bouts of weakness if you are looking to add to long-term positions and enjoy the ride.

***ALSO JUST RELEASED: Wild Action In Major Markets Ahead Of FOMC But Here’s The Key To Tomorrow’s Trading CLICK HERE TO READ.

The Key Level In The Most Important Market In The World, Plus A Q&A About The Gold Market