They’re not telling you, but this is how bad the collapse is and what is being done to save the system.

June 16 (King World News) – Jeff Snider at Alhambra Partners:  In its earliest years, the Discount Window wasn’t something to be avoided at all costs, it was nearly the whole point. In order to supply largely seasonal liquidity, the word “discount” meant banks could show up at one of the local 12 Fed branches and post collateral for an increase in their reserve balance. No one would be stuck holding illiquid even short-term paper.

Operating on a loose doctrine of “real bills”, there wasn’t even much management required. Most of the collateral being handed over was self-extinguishing, an exercised letter of credit or temporary funding note for some real economy purpose. Along with promoting the market for bankers acceptances, the Fed’s job was to ensure there wouldn’t be a cash crunch by “rediscounting” these financial instruments with almost no questions asked.

So long as banks were making real bills, that is letters of credit for real economy projects and needs, the Fed stood by to provide any and all liquidity you’d ask of it…

Control was instead imposed via the Discount Rate (raising it meant discouraging the practice of rediscounting by making it slightly more expensive) while credit risk was managed by administrative means (bank examiners, mostly).

After the Great Collapse into the Great Depression, the Federal Reserve was revamped closer to the structure we recognize today. The Discount Window was reimagined, repurposed to be the primary vehicle as this new lender-of-last-resort. Using the Federal Reserve to fund regular economic operations was suddenly frowned upon (it had a lot to do with the larger concept of “borrowed reserves” and federal funds, but we’ll save that one for a later date).

In January 2003, after decades of inept practice, the Discount Window was reimagined yet again. The reason was stigma. After having been encouraged into disuse, the supposedly primary emergency funding mechanism had mutated instead into a complete no-go zone; because the Fed doesn’t want you unless you’re in a dire emergency, by merely showing up at the window everyone is immediately alerted to your true situation.

To counteract the presumed negative forces of disrepute, the Greenspan Fed in 2003 slickly relabeled the Discount Window as Primary Credit (also coming up with a secondary avenue called, unoriginally, Secondary Credit) and rearranged its rate placement in the pecking order. Why, you ask?

The rule change to primary credit (why it is called primary credit) removed the restriction against relending any federal funds borrowed there. Prior, any bank borrowing at the traditional Discount Window was prohibited from further distributing those funds; again, last resort.

Because Primary Credit was believed to have cleansed the stigma of the Discount Rate coupled with the ability to relend, theoretically (and academically) it was expected that if money market rates rose above the Primary Credit “ceiling” other healthy banks would then borrow at the formerly Discount Window and relend those funds back into the market as an arbitrage of flow (acknowledging that the federal funds effective rate itself is not really a singular price but an attempt to aggregate and average many trades). Paired with the federal funds target (the policy rate), the new Primary Credit (and Secondary Credit) was meant to define a hard corridor for money market rates. Fragmentation was believed as a remote problem defined instead by these policy arb opportunities.

The Fed wanted to create a means whereby otherwise healthy and liquid firms would take advantage of the Discount Window, thereby borrowing an excess from the central bank and then relending to anyone in need of liquidity who might be afraid to access the program directly.

That’s where the ceiling idea essentially comes into play, since these healthy firms are borrowing from the Fed at the policy target plus a big spread (originally set +100 bps). Because there were theoretically no limits, and no restrictions upon relending, the good banks would borrow sufficiently from that level and keep the market as a whole stocked, albeit at a higher average rate, until whatever problem blew over and everything went back to normal…

This new Primary Credit scheme was never intended to be anything other than an emergency mechanism, a bypass for troubled spots; its reform aimed at making it a more workable one. To smooth over a liquidity rough spot, offering as much as needed temporarily until everything got back to normal. In short, still the Discount Window just no stigma.

Since the very first central bank, there has been a debate as to whether or not there is merit to acting as a funding vehicle. The 1920’s Fed, for instance, was a relatively lonely exception. Even Walter Bagehot’s famous dictum was meant for periods of gross market insurrection rather than a regular means to a monetary end.

In light of what modern central banks do, profess that they’d prefer to do, what are we to make of the Federal Reserve’s central bank liquidity swap operations? Better known as dollar swaps.

Here, the Fed has standing arrangements with now many counterparty central banks around the world. The world needs dollars but the Federal Reserve is no dollar central bank, it is purely a domestic banking authority. However, also realizing no one else is going to (or is able to) take responsibility, as well as having learned the hard way the dire consequences of doing nothing (GFC1), dollar swaps are the least our “central bank” can do. The absolute least.

These are arms’ length for a reason – Jay Powell knows there’s a dollar shortage out there in the rest of the world, but he has no authority to do anything directly about it nor the inclination since he knows he can’t just admit to the Congress and the public there’s this massive offshore dollar market officials have disavowed for decades.

And to further say it is a vital piece of the global economic machinery? Not happening. Better to say you’re providing liquidity to other central banks in their own jurisdictions and leave the public to wonder why it is in the form of FX swaps curiously taking on the denomination of US dollars.

These swap lines were made permanent with the original, narrower group of foreign central banks in light of the 2011 crisis (Euro$ #2). In the middle of GFC2, on March 15 on that memorably embarrassing Sunday night panic-fest, they were altered (read: made cheaper because the market obviously wasn’t demanding them) and then later expanded to other counterparty central banks beyond the first group.

Markets Collapsing? How About Some Liquidity Swaps? 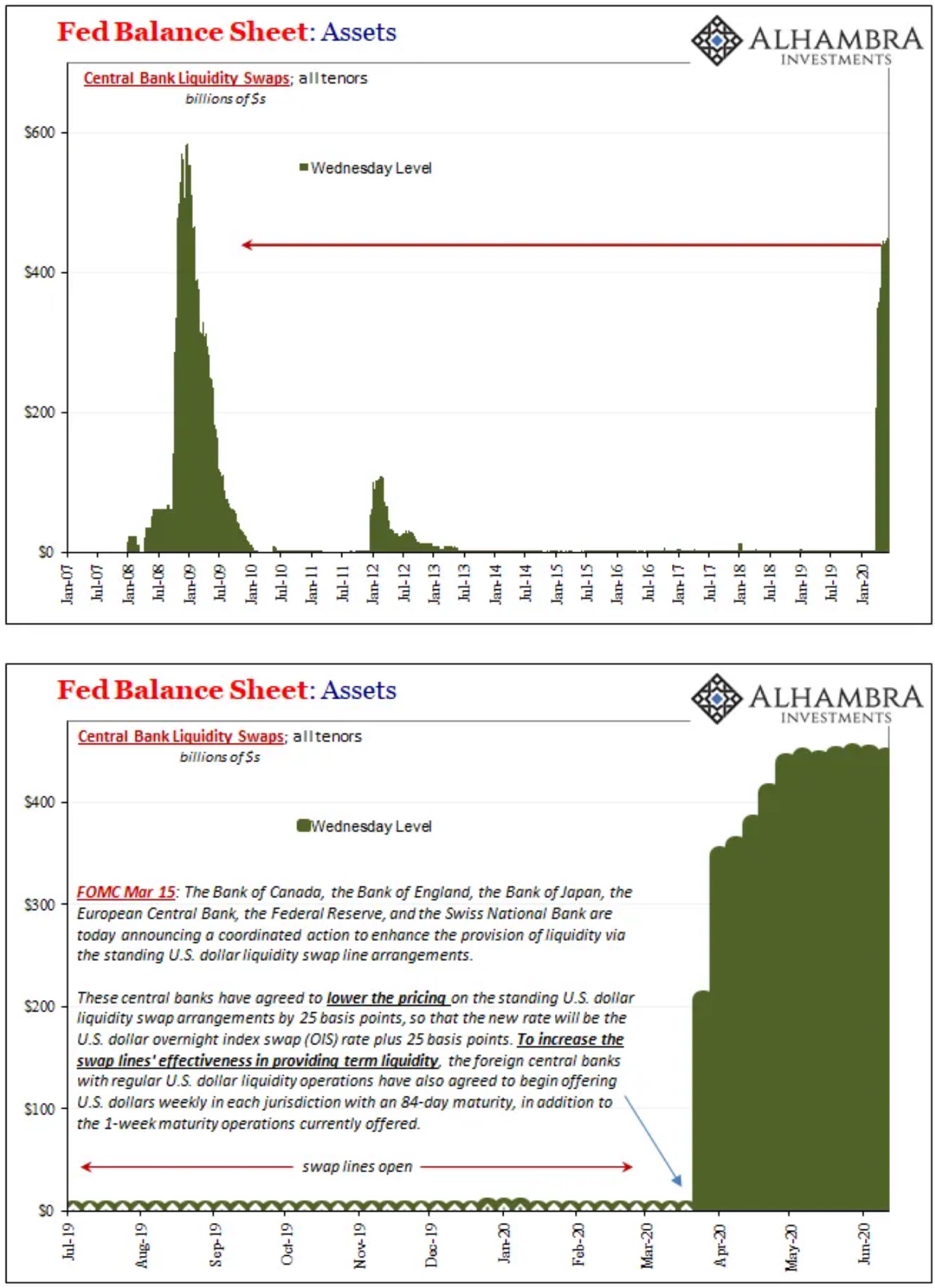 Fair enough. So, here’s the big question: why are they still being used at practically the same level or volume? For each of the last seven weeks, the level outstanding has been remarkably constant.

Given outstanding practice and doctrine, this is the last thing Jay Powell should want to see. Has the Fed morphed back into a quasi-real bills state, or is the “temporary” market disruption of March and April maybe not nearly so temporary? And, thinking along these lines, that “flood” maybe didn’t work at least so far as getting things back closer to normal.

These aren’t all 84-day operations (which have begun to mature this week).

Nor is this question merely academic, especially considering just who it might be that’s bidding overseas for this funding (spoiler: US banks, uncovered, for the second time, courtesy of TIC data). 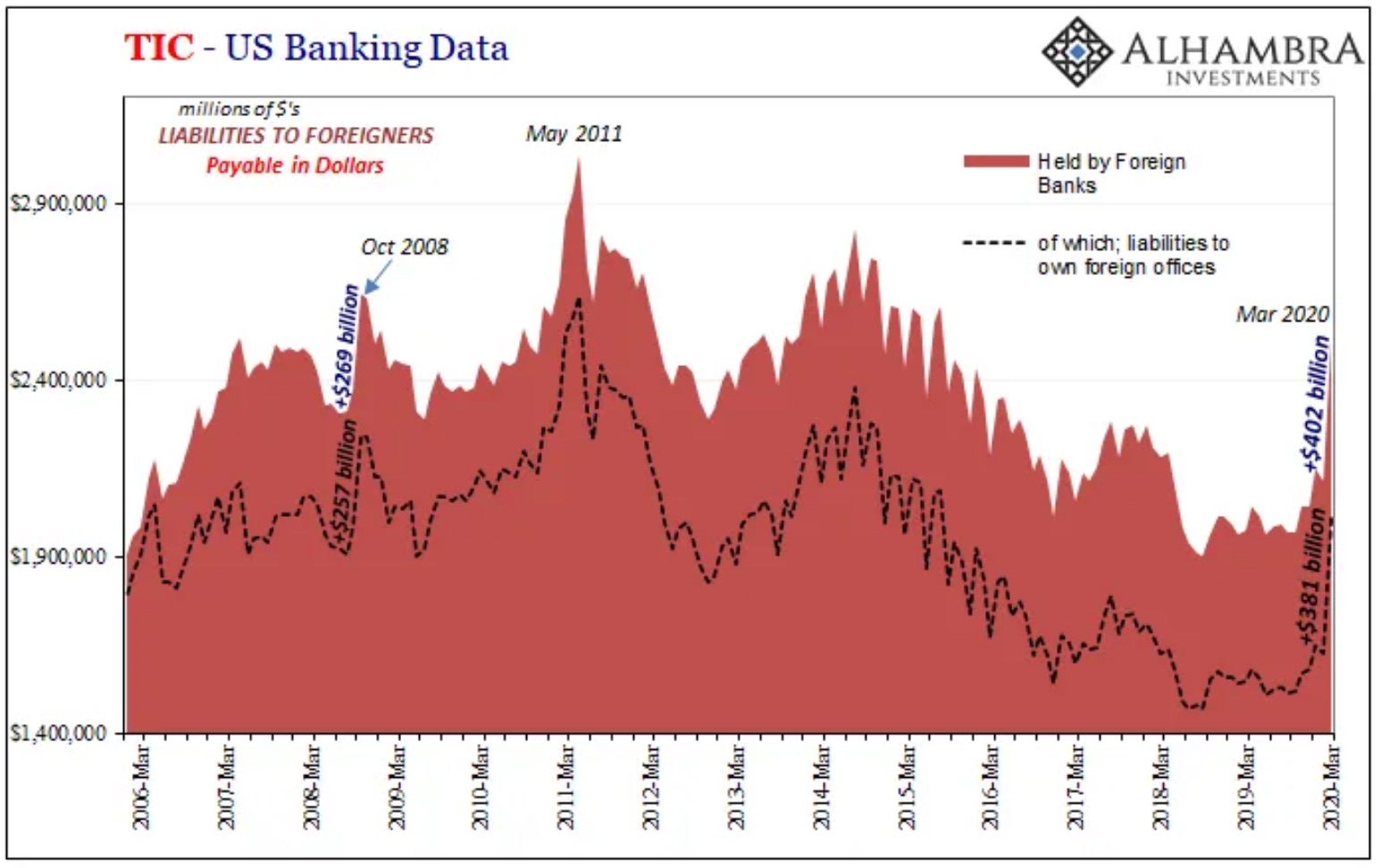 Put another way: should we possibly be a little concerned that after three months of this “dollar flood” and inflationary “money printing”, the domestic dollar market is so broken that US banks are, through their foreign subs, still bidding for the same high level of last-resort dollars in the most indirect manner available? It seems as if companies might be.

As I wrote a month ago:

That’s not a substitute for a dynamic offshore marketplace; it is a complete farce. What about anyone else in the world who might need “dollars” who actually are foreign banks? Put another way, if Jay Powell’s overseas dollar swaps just end up back in the US anyway…why bother with the charade? It’s as if they don’t really know what they are doing.

It looks to the trained eye as if Primary Credit’s wanted function has been moved overseas. I fail to see how that could be a good thing, especially ongoing.

A little bit of survivor’s euphoria has caught the Treasury market, too, such that yields had moved higher slightly, and inflation expectations bumped up ever so gently (as these things do). Suddenly the 5s30s are, or were, all the rage (having been totally ignored on the way down). These were made out to be the most conclusive signals of the flood of not just dollars but an inflationary V-magnificent recovery.

At least for a few days. Maybe things aren’t so fixed as you’re led to believe? Then again, that’s the point, isn’t it? The whole sham is about making things seem fine.

If At First You Don’t Succeed, Try The Same
Thing That Failed…Again 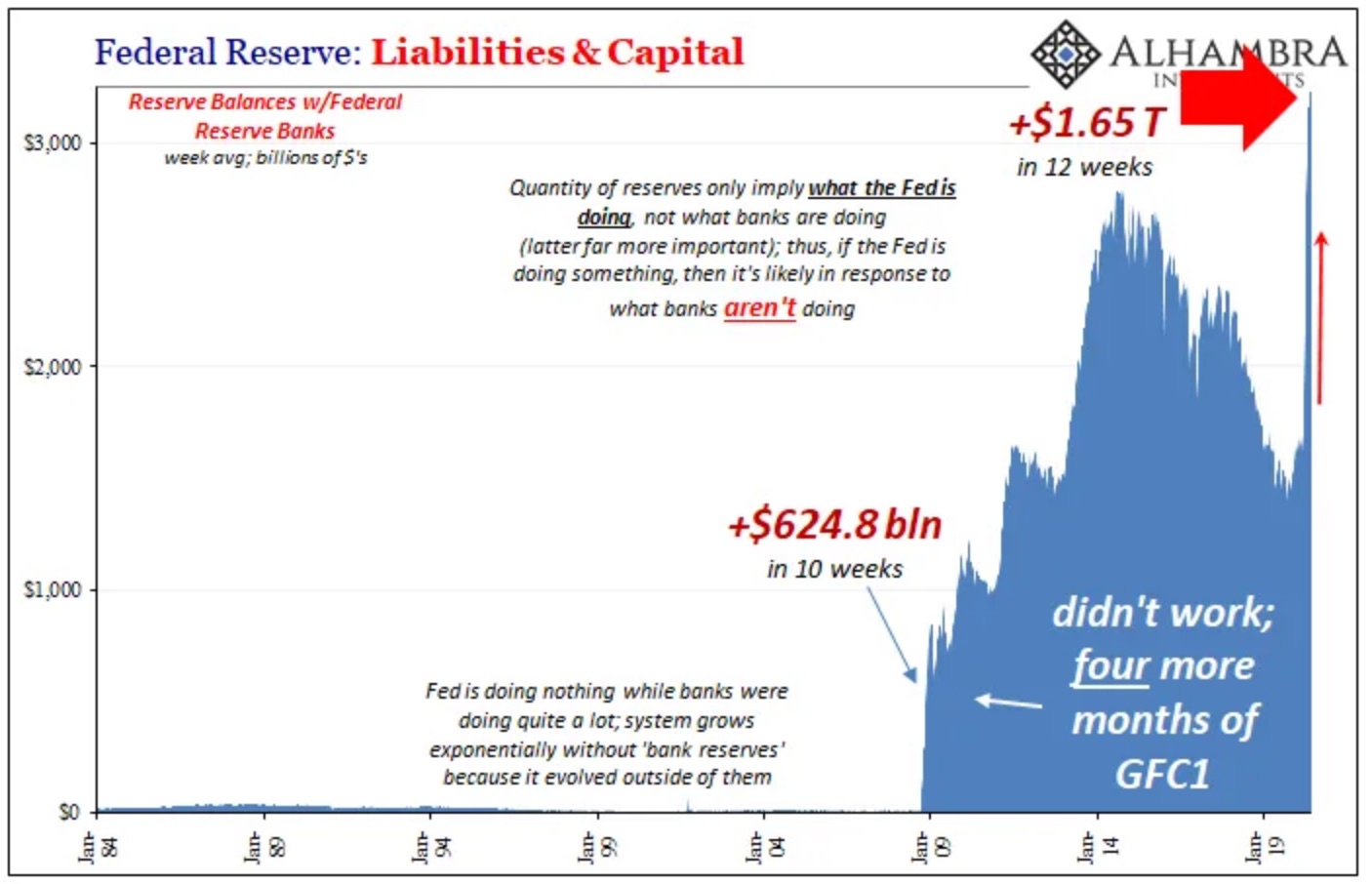 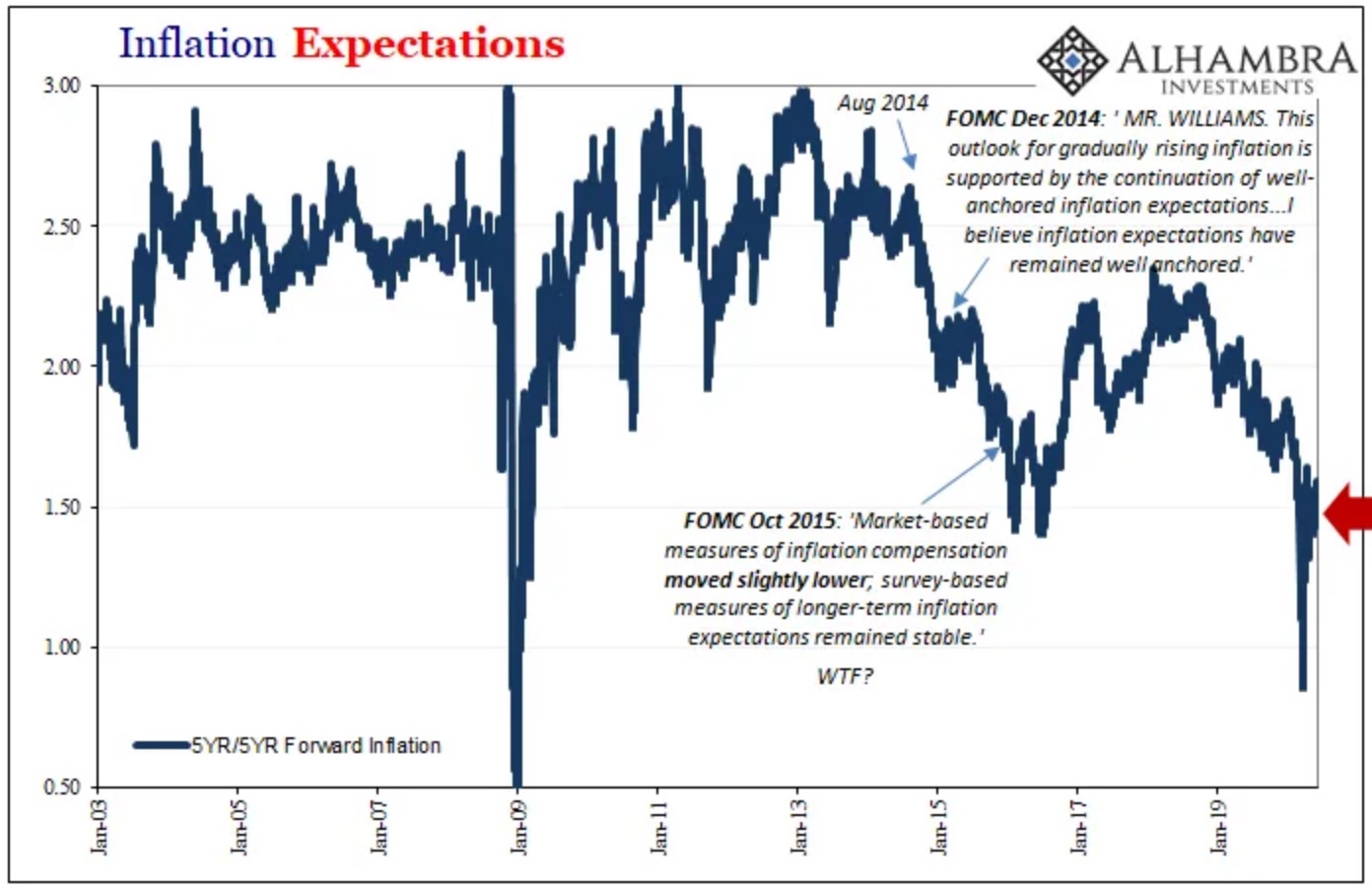 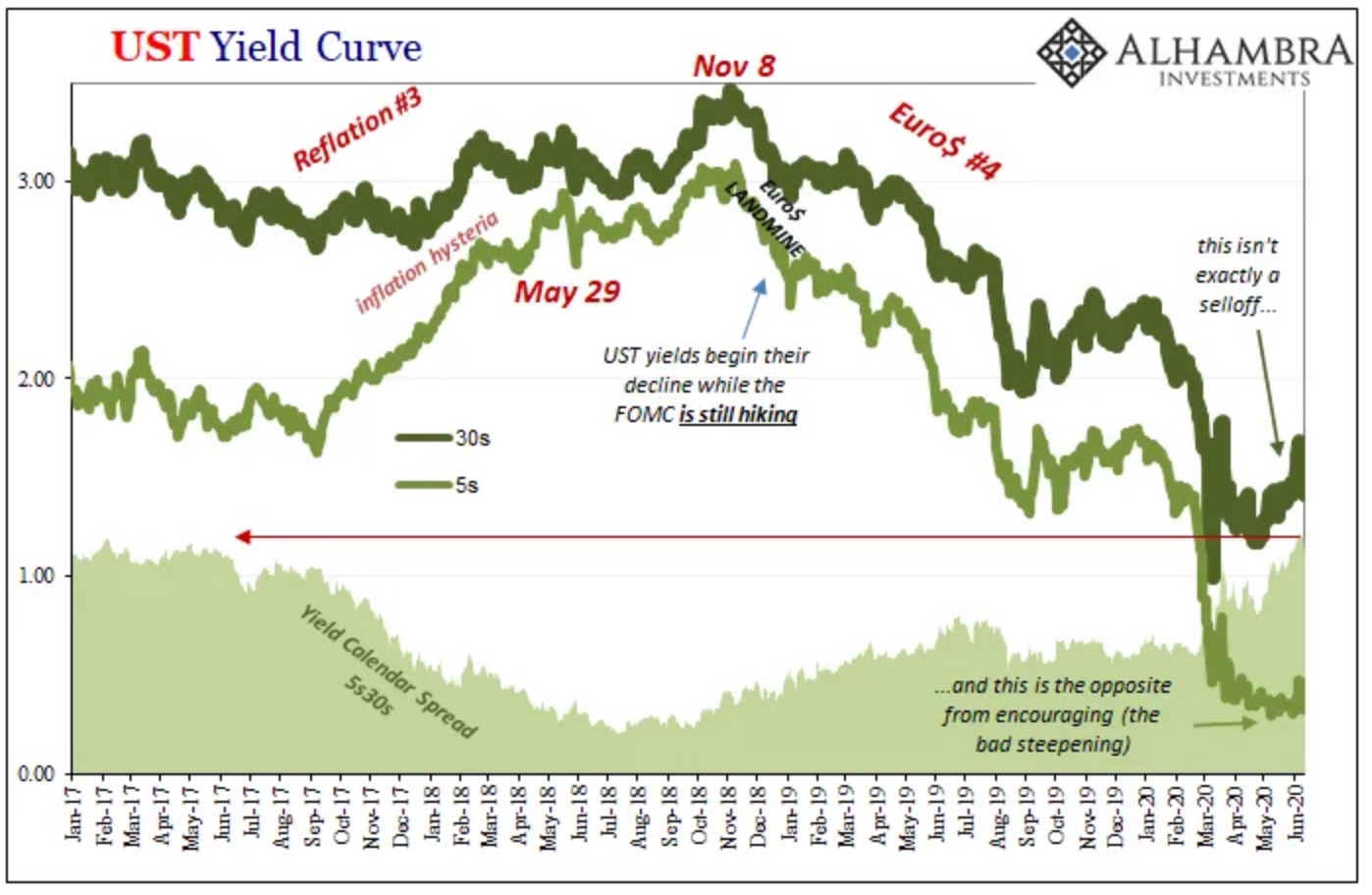