Today one of the greats in the business just issued this dire warning about Bitcoin. 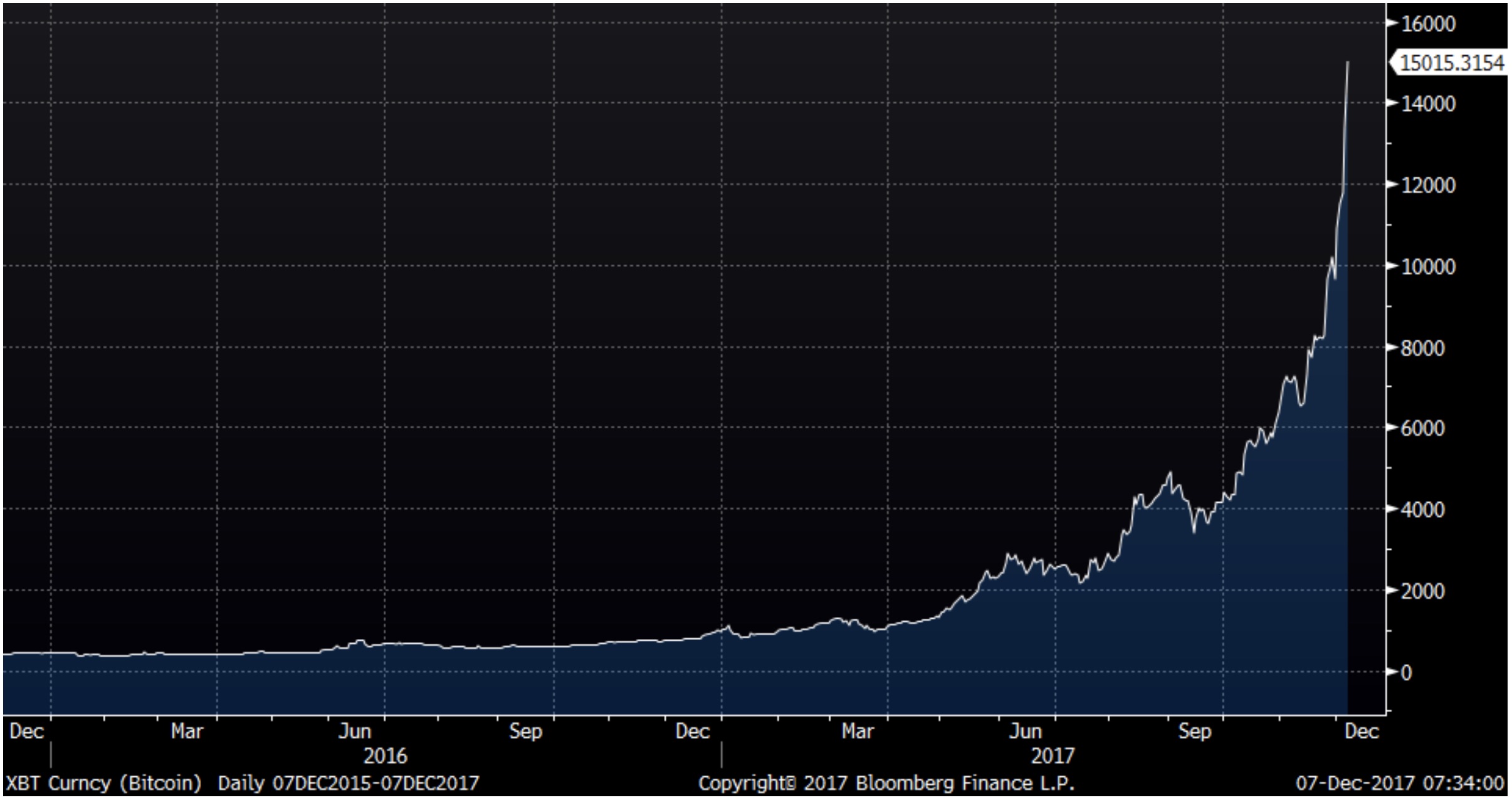 But the chart above from Boockvar was sooooo hours ago as Bitcoin has now broken above $17,000. Actually Peter did publish that chart hours ago (in the morning) but the price has continued to skyrocket throughout the rest of the day.  Now for a major warning regarding Bitcoin from one of the greats in the business…

Bitcoin Blow-Off
December 8 (King World News) – Here is an extraordinary warning regarding Bitcoin that was issued by Jason Goepfert at SentimenTrader:  Anecdotal evidence of a blow-off in Bitcoin has exploded over the last couple of days. That’s hard to incorporate, so using data related to price action and public interest, we see that a sentiment model has reached blow-off territory. The few other times we’ve seen an extreme like this, further gains were erased in the week(s) ahead, especially once there was an initial sign that late buyers were getting scared…

Anyone consuming financial media on Thursday could not help avoiding Bitcoin. Many would prefer to do so, since it has generated the kind of hype that markets haven’t seen for years. Perhaps since the tech bubble.

Getting into a discussion about its merits (or lack thereof) and bits of bubbly anecdotal evidence (of which there is an overwhelming amount) is kind of a no-win situation. Most of us don’t hold or trade it, though with the possible introduction of a viable (?) futures contract, it’s becoming more interesting to mainstream speculators.

In the May 22 report, we looked at a sentiment model that incorporated the persistency of the trend, its deviation from average on multiple time frames, public search interest, and range expansions. The greater each of those are, the higher the likelihood that Bitcoin was nearing a blow-off peak.

At that point, the model was nearing two prior peaks and managed to climb a bit higher over the next few sessions. Bitcoin itself continued to rally, but in true blow-off fashion, saw all those gains vanish in the month(s) ahead. Over the past couple of days, that model has surged to a level that equates with two prior blow-off peaks in early April 2013 and late November 2013. 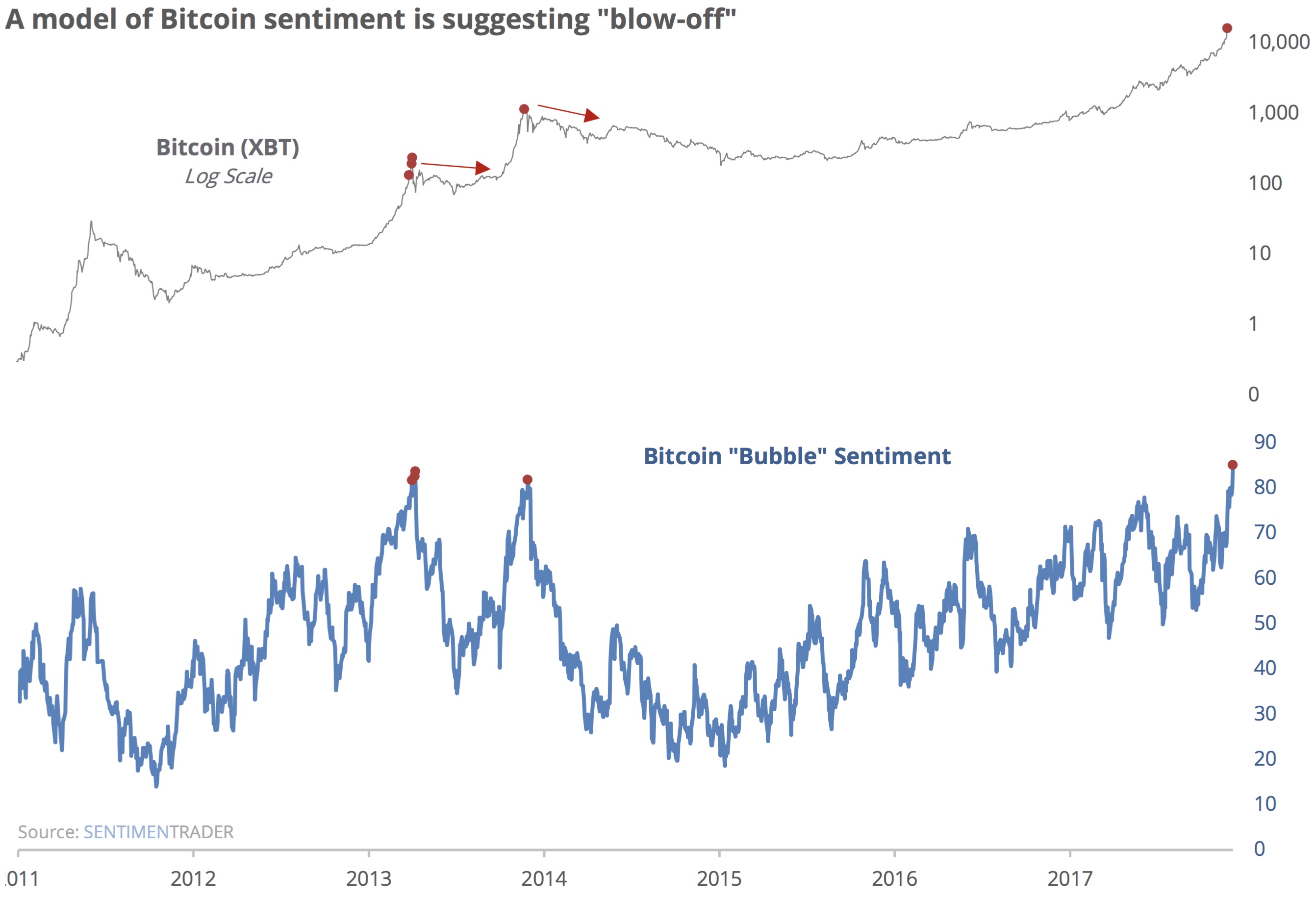 The Optimism Index that we update on the site uses a different calculation, but that is nearing an all-time high as well. The only times that exceeded the current level were in early January of this year and early November 2015 prior to that. 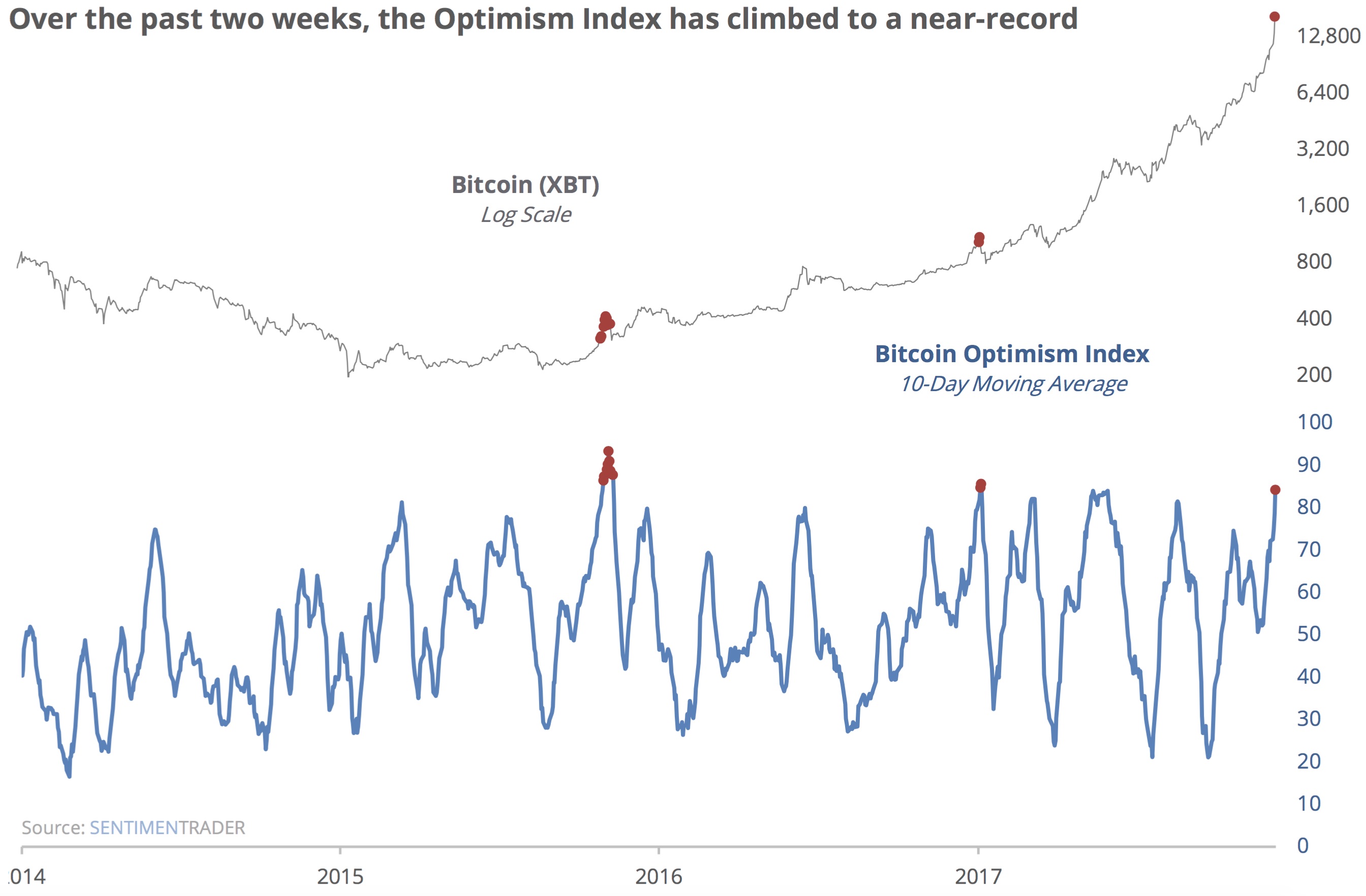 With a market that is experiencing truly manic momentum, trying to anticipate the end of that phase is usually too questionable to determine if the risk/reward is worth it. It has most often been better to wait for the initial crack in the facade, as the late buyers use that as a trigger that all may not be well and they then scramble to exit.

When the 10-day average of the Bitcoin Optimism Index has jumped above 75, and then we see a daily reading below 40, it has led to further losses more often than not, and high risk in the shorter-term.

All The Hallmarks Of A Blow-Off
Behavior like we’ve witnessed over the past couple of days has every hallmark of a blow-off. That doesn’t mean it has to peak immediately, but there is an extremely high likelihood of losses over a multi-week time frame.

King World News note:  With Bitcoin “bubble” sentiment hitting an all-time record, the fallout from the manic buying binge is likely to be quite terrifying for even the staunchest of Bitcoin bulls.  KWN will keep a close eye on how Bitcoin trades in the coming weeks and months and update as necessary.

This is another example of why Jason Goepfert is the best in the world at what he does — providing actionable market data.  The charts and commentary above are from SentimenTrader. To try a free 14-day trial of the internationally acclaimed work that Jason Goepfert produces at SentimenTrader simply CLICK HERE.

The World Is Quickly Approaching A Hyperinflation Disaster