With continued uncertainty around the globe, today the man who has become legendary for his predictions on QE, historic moves in currencies, spoke with King World News about a devastating endgame the world faces and how they all sold the absolute bottom. 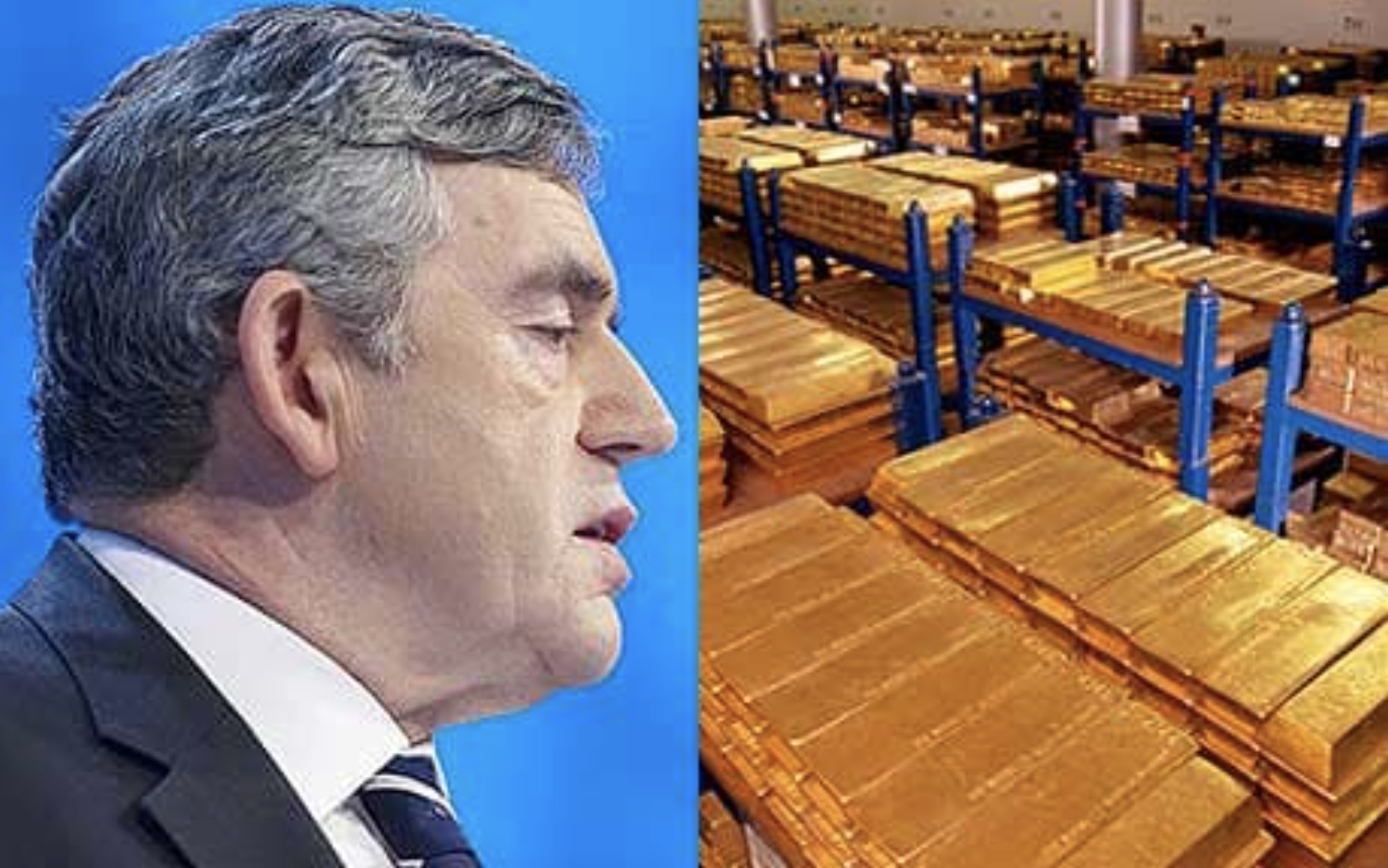 “They All Sold At The Absolute Bottom”
Egon von Greyerz:  “Western central banks have a real knack for timing the sale of their gold reserves. They are absolute experts when it comes to picking the bottom of the gold market. Central banks in the UK, Switzerland and Norway, to mention a few, timed their sales to perfection. The only problem is that they all sold at the absolute bottom between 1999 and 2004. That was of course the time to buy gold and not to sell. But the finance ministers in charge of Western economies have no understanding of economics. They don’t even understand that the absolute destruction of their paper money is always revealed by the gold price… 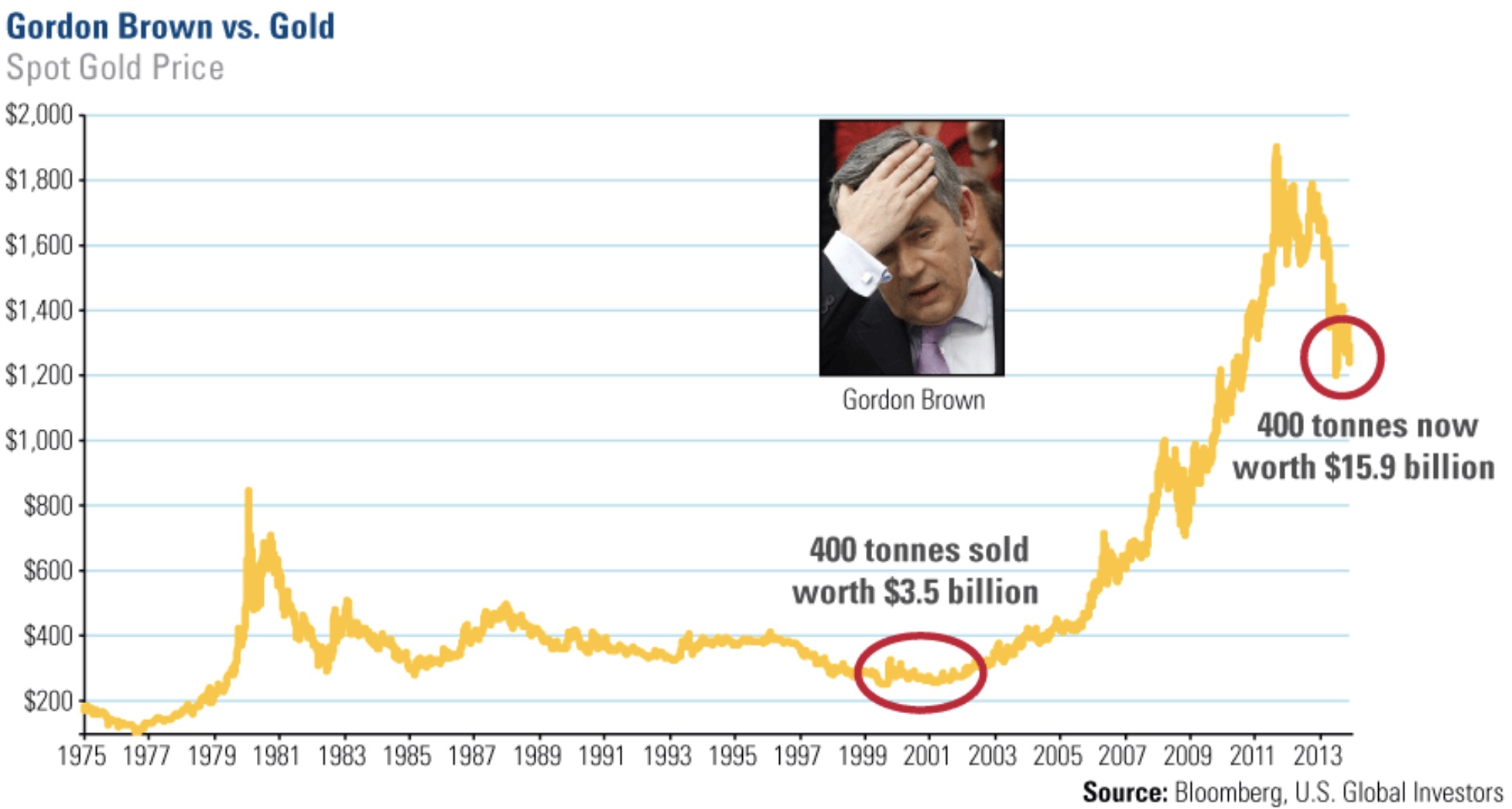 Egon von Greyerz continues:  “As central bank heads were embarking on the biggest credit expansion and money printing in history at the beginning of this century, they sold the only asset that they should have held on to. The UK Chancellor of the Exchequer in 1999 was Gordon Brown. After a 20-year decline in the gold price he sold 58% or 395 tonnes of the UK gold reserves between £160 and £185 per ounce. Today gold is £1,000 per ounce or almost 7x as high as when Brown decided to sell the UKs most valuable asset. Brown’s disastrous decision to sell the gold has cost the UK nearly $12.5 billion (see chart above and below). 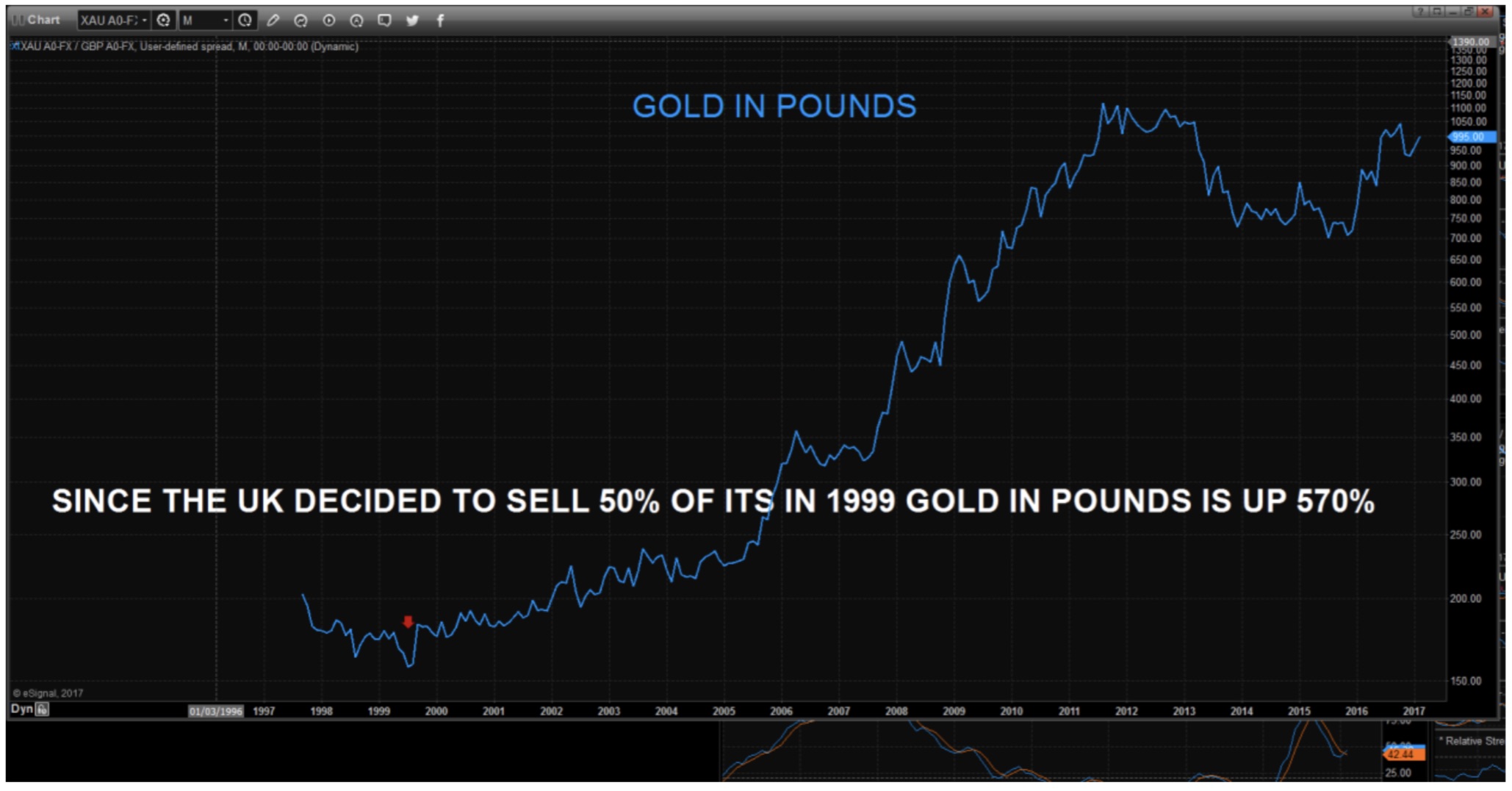 Switzerland, which is a country that has very strong gold traditions, also made the wrong decision at the wrong time. They sold 50% or 1,300 tonnes of their gold between 1999 and 2005 at an average price of CHF (Swiss Francs) 505 per ounce. Another 250 tonnes were sold between 2007-2008 at CHF 780 per ounce (see chart below of dwindling Swiss gold reserves). 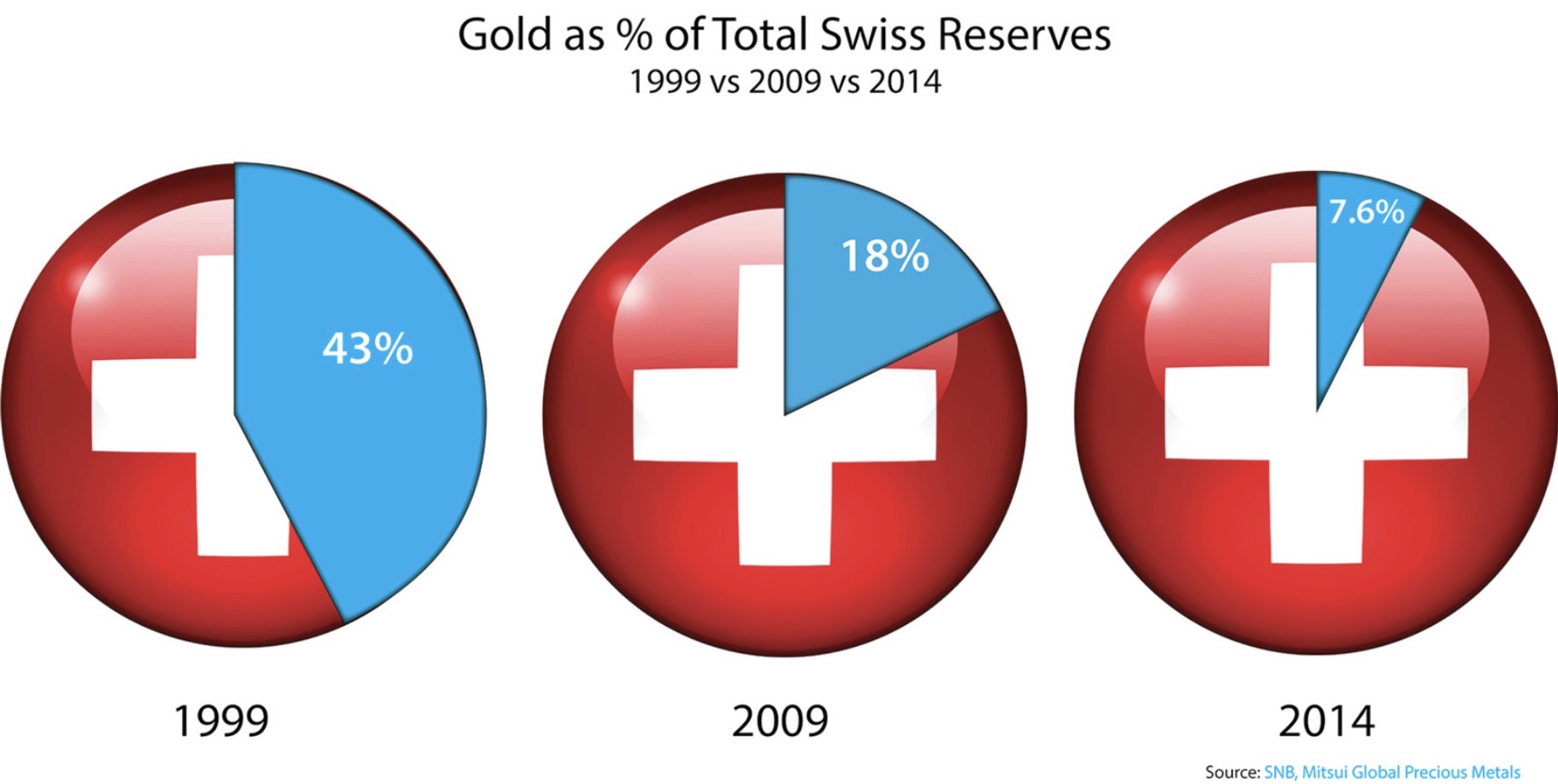 Today gold in Swiss Francs is 1,240 per ounce. The gold that my Swiss compatriots sold today would be worth CHF 34 billion ($34 billion) more (see chart below).

The Swiss Also Sold Gold At The Bottom 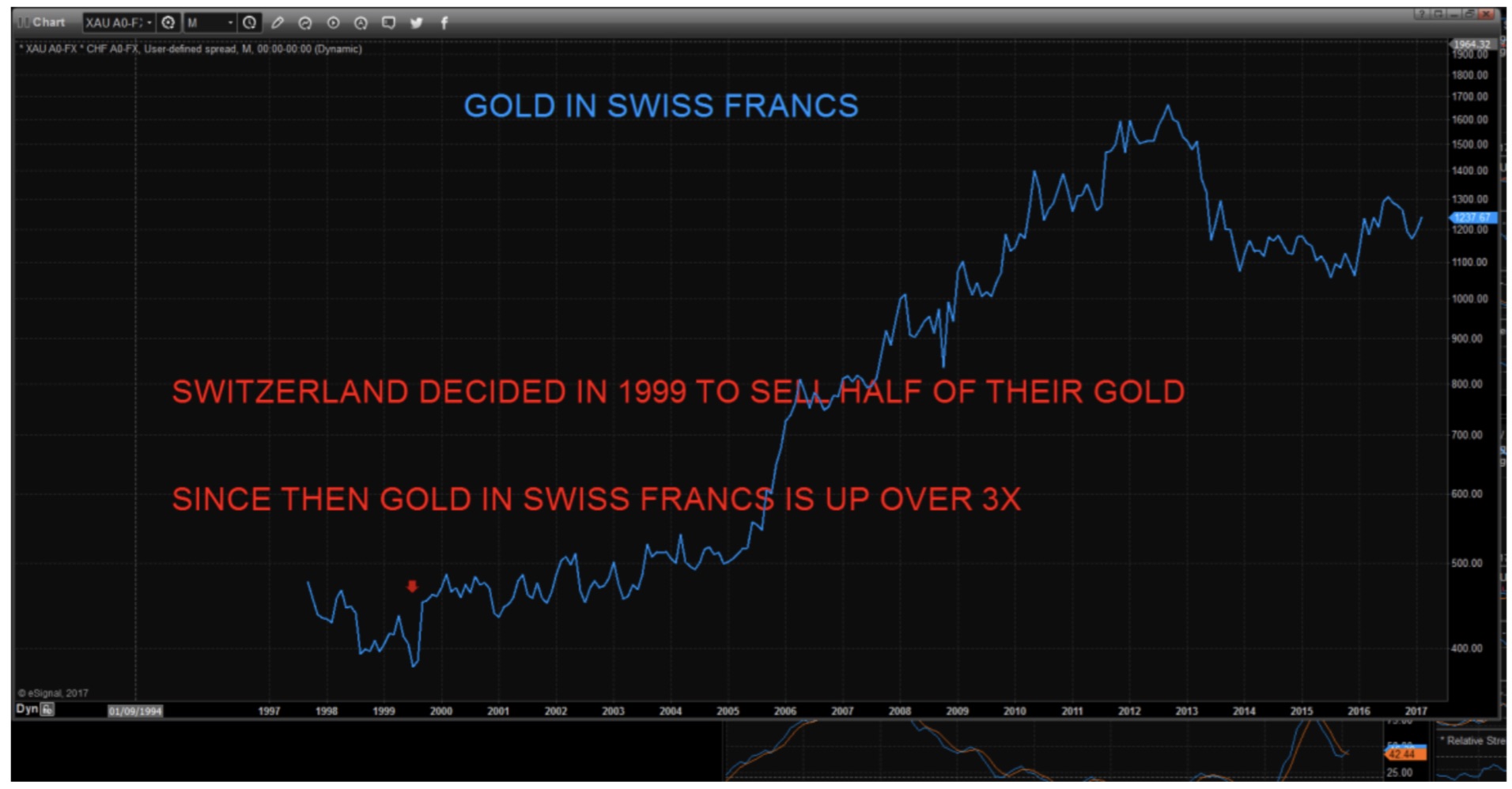 But it is not just the fact that both the UK and Switzerland sold all their gold at the bottom. If they had understood the effect of their currency debasement policies, they would have bought gold instead of selling it. This is exactly what the Silk Road countries have done in this century. As the West has been selling, China, India, Russia and Turkey have acquired a staggering 28,000 tonnes of gold since 2000 (see chart below). 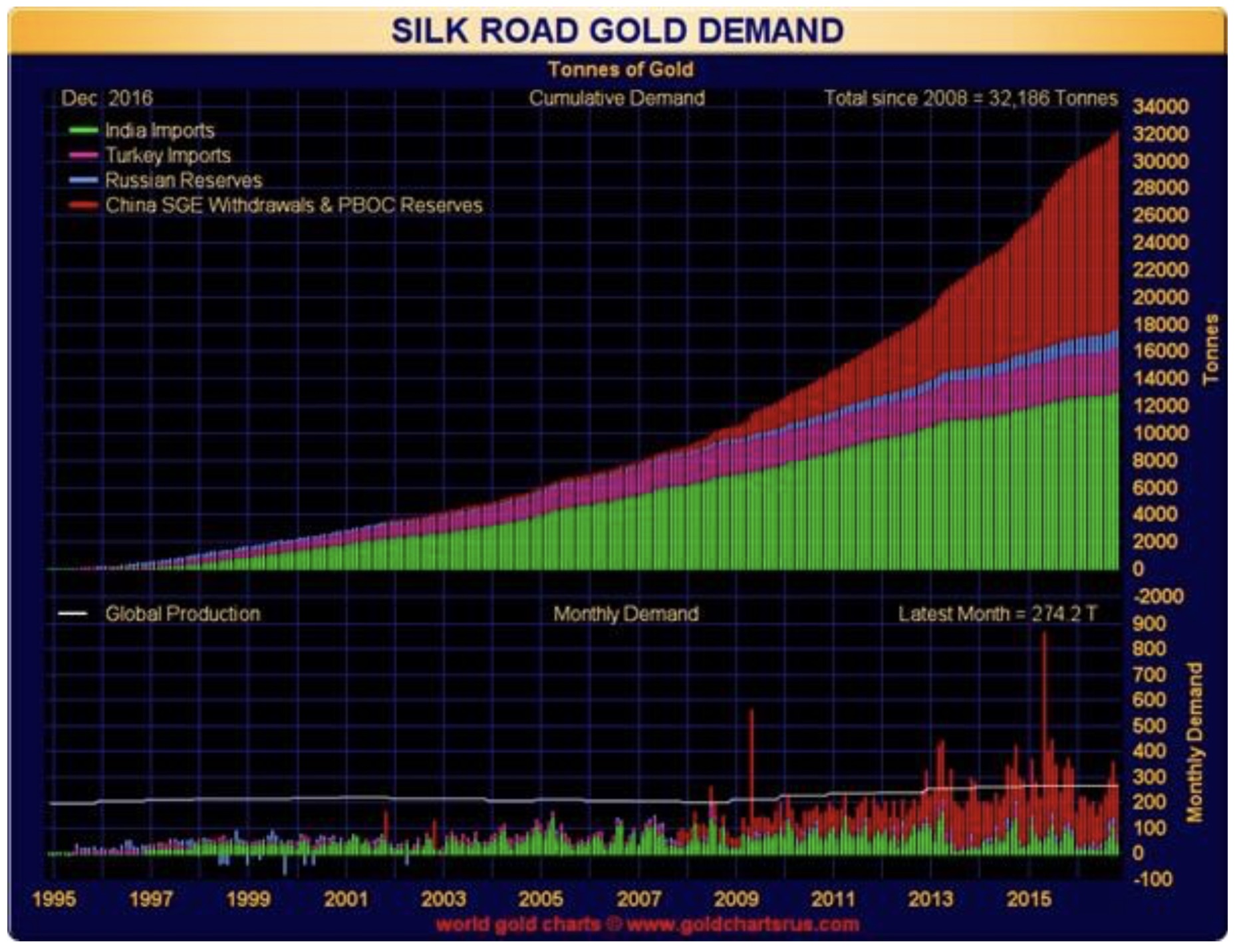 Finally, we have Norway which has never had significant gold holdings. But that didn’t stop them from selling all of their 33 tons of gold in 2004 for $450 million, which is 1/4 of what it would be worth today. Like many countries which have acquired their wealth by luck or theft, Norway became rich beyond their dreams due to their oil discoveries.

Norway Sold All Its Gold Near The Dead Lows 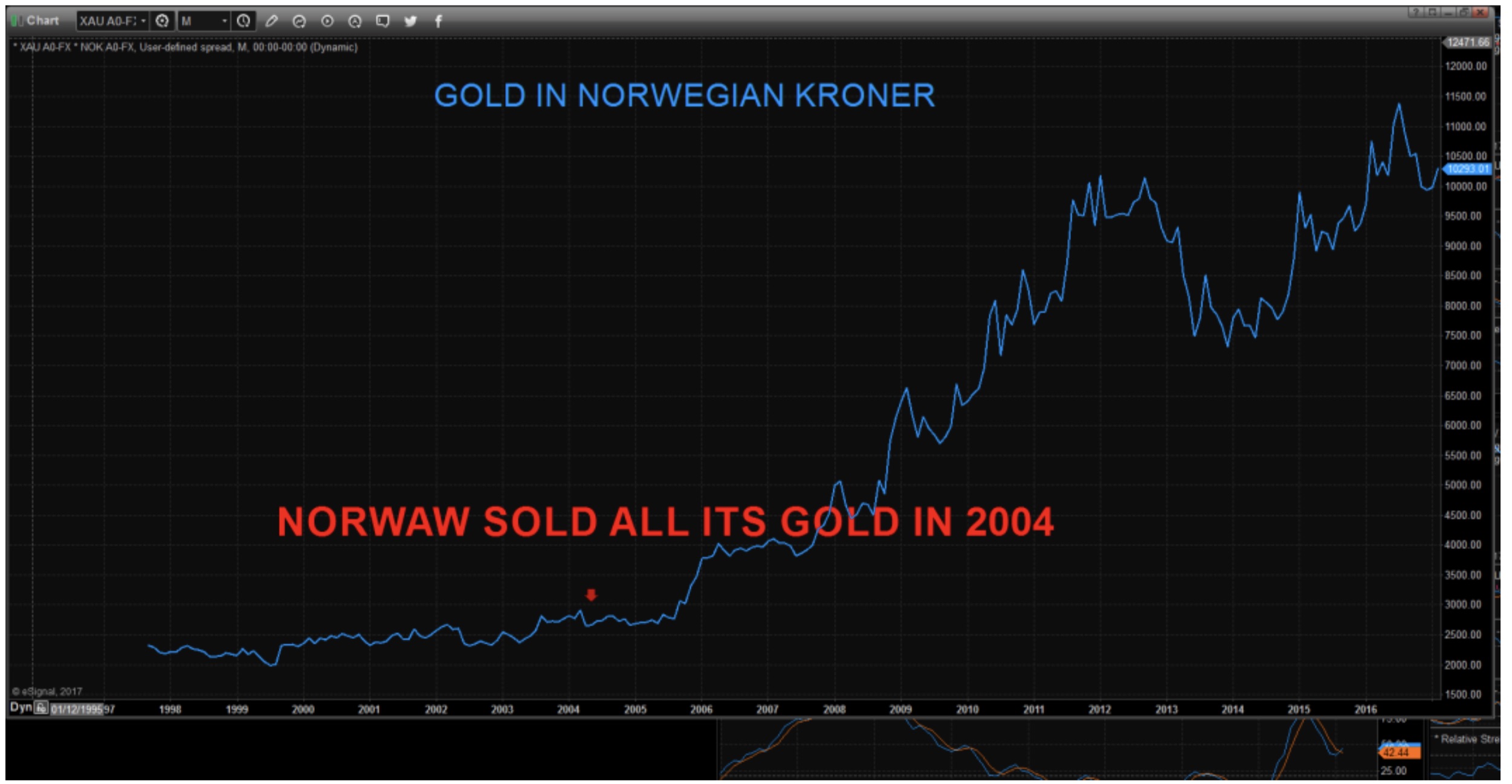 Whether this kind of wealth is attained by stealing gold or other commodities from colonies, or by finding natural resources in your home country, it often leads to an arrogance and a belief that a country has eternal wealth. This happened to many countries like Spain and Portugal in the 16th-18th centuries and the UK a bit later as the resources stolen from the colonies stopped flowing. The same is happening to Saudi Arabia today as their deficits build up rapidly due to lavish spending and a lower oil price. In the last couple of years their deficit has been $80-98 billion or 12-15% of GDP.

Norway, a small country which has lived well on their oil discoveries in the last few decades, has built up the world’s biggest sovereign wealth fund of $900 billion. With the lower oil price, Norway has discovered that they, like Saudi Arabia, now must start to tap their fund. They expect a budget deficit of 8% of GDP in 2017. If oil prices remain low, Norway could withdraw as much as 4% of their fund annually. On top of low oil prices, low bond yields have resulted in a very low growth of the fund.

But the Norwegian Central Bank has an elegant solution to this problem. They will increase the fund’s current equity exposure from 60% to 75%. That means spending another $130 billion on global equities. Clearly the bank’s board is not concerned that stocks worldwide have seen an exponential rise and are grossly overvalued. Their greed for higher yields dominates their thinking rather than realizing the massive risk they are taking with the nest egg of the Norwegian people.

The World Is Now Heading Into A Devastating Endgame
Their main concern is that the oil price will remain at current levels which could wipe out 50% of the value of the fund in the next 10 years, but the chance of that is only 1% according to the head of Norway’s Bank. What the Norwegian Bank governor Olsen has not yet worried about is a potential decline in stock markets of 75-90% in the next 5 years. A move of that magnitude, which is not unlikely, combined with low oil prices and increasing deficits, could wipe out Norway’s Sovereign Wealth Fund within the next 5 years. Naturally, no bank governor would make such a forecast since that would cause him to be sent to an asylum.

Central bank chiefs never tell the truth when they are in power. We have seen the same with Greenspan, who advocated the virtues of gold before he became Chairman of the Fed, and now again he has declared that he “views gold as the primary global currency.” Imagine what a hero Governor Olsen would become if he spent $130 million on buying gold at $1,240 per ounce instead of stocks at a P/E of 29 or above. Instead of presiding over a collapse of the Norway’s Sovereign Wealth Fund, he would be the first Western bank governor to insure the wealth of his nation with gold. But neither Norway’s bank governor nor any other Western central bank head would dare to make such an intelligent move. This would go against all conventional wisdom.

To find wise central bank governors we must go East. In the West, fiat money rules and no government or central bank chief understands the significance of gold. How refreshing it is then to find a governor of a country which has a similar size population to Norway, who wants each one of his citizens to own 100 grams (3oz) of gold. The country is Kyrgyzstan and the central bank governor, Abdygolov, advocates gold as an excellent method of saving:

“We are hopeful that our country’s population will learn to diversify its savings into assets that are more liquid and — more importantly — capable of retaining their value.”

The country is also practicing what it is preaching by increasing its gold holdings fourfold since 2006, albeit from a low level.

When did we last hear a Western central bank head tell its citizens that the best way of protecting themselves against the central bank’s destruction of the currency is to own gold?

Imagine if Janet Yellen told the Americans that the US will soon print unlimited amounts of money to save the country and therefore the Fed suggests that everyone buys 100 grams or 3 ounces of gold before they start printing. If 325 million Americans bought 3 oz of gold each, the US population would own 32,500 tonnes, which is 4X what the US government allegedly holds, and 10 years of global mine production. But even if the US population bought 1/10th of that they would own 3,250 tonnes, which would be worth $130 billion. So instead of owning 100 grams like the people in Kyrgyzstan, every American would on average own 10 grams or 0.3oz of gold, which today would cost $400 to acquire. Not an unattainable amount if saved over a couple of years.

But we are of course dreaming. Yellen would never tell the American people that the Fed and the US government will destroy the dollar. Nor will she tell them that since Nixon abolished the gold backing of the dollar in 1971, their money has lost 97% in real terms, when measured in gold. Instead, in the next few years the American people will sadly find that their US dollar will be completely worthless. But for a well-informed and small minority, it is still possible to protect themselves by buying physical gold and silver today before the dollar reaches its intrinsic value of ZERO. ***KWN has just released the remarkable audio interview with Michael Belkin, the man who counsels the biggest money on the planet, discussing the mining shares, gold, silver, global markets, and much more, and you can listen to it by CLICKING HERE OR ON THE IMAGE BELOW.

***ALSO JUST RELEASED: A New Monetary System Is Coming But We Are Being Threatened With A Crushing Blow To Our Way Of Life CLICK HERE.