July 25 (King World News) – Here is what Peter Boockvar noted as the world awaits the next round of monetary madness:  As FOMC members have recently expressed some reservations with valuations in some asset classes such as commercial real estate, I’d add this to yesterday’s list of things I would bring into a Fed meeting if I were a staffer…

I’m the first to admit that valuations are terrible short term market signals in terms of trying to gauge direction. I’m of course stating the obvious to any student of markets and history. I like to say that valuations don’t matter until they do. Longer term, defined as a 10 year time frame, valuations of course matter very much in gauging future returns for the sole reason that the more one pays today for a current stream of future cash flow, the lower the likely return and vice versa. Consider that a more richly valued market today ‘steals’ returns from the future. Again, vice versa. Without getting into a long discussion over when valuations will matter (I think they simply do when monetary policy changes, whether via easing or tightening) I just wanted to update a valuation chart as I’ve been hearing again that stocks are not as expensive as they were in early 2000. On a P/E ratio basis that is certainly true but look at this chart which is the price to sales ratio of the S&P 500. Another 6% rally from here would put us in line with early 2000: 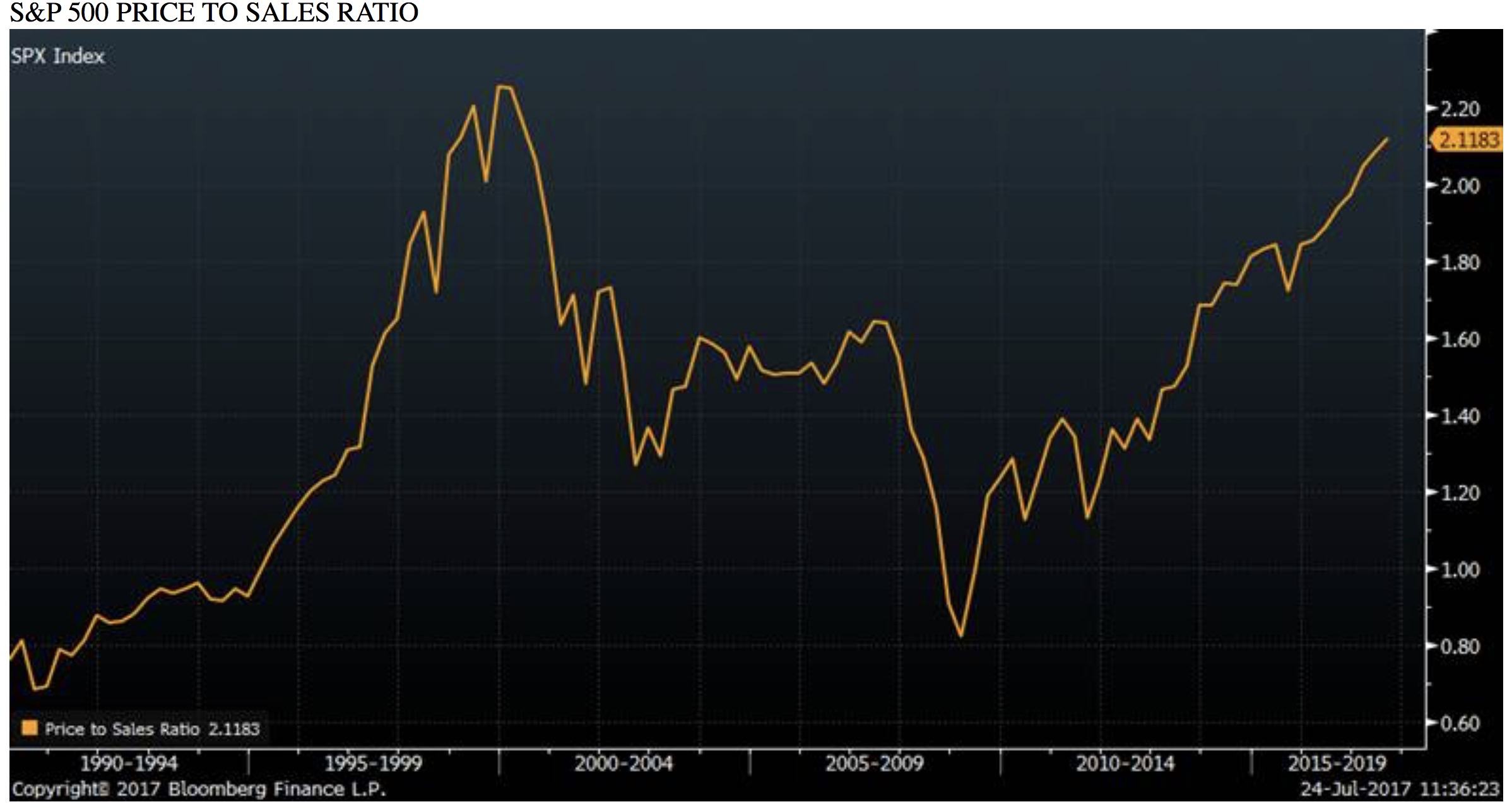 European stock markets are getting a lift off recent weakness as the July German IFO business confidence index rose to 116, the highest on record dating back to 1991 from 115.2 in June. The estimate was for a slight drop to 114.9. Both the Current Assessment and Expectations were up m/o/m. The IFO said simply, “Sentiment among German businesses is euphoric…Germany’s economy is powering ahead.” The only area that reflected some moderation was in retailing. Manufacturing hit a record high as did construction. That latter can thank the policies of the ECB as real estate is the new hot area. Bottom line, the data speaks for itself in reflecting the current strength of the German economy but I do want to emphasize that historically this index has been more coincident in nature, not leading. It topped in April 2000, bottomed in December 2002, topped in December 2006, bottomed in March 2009, peaked in December 2010 (right before Greece problems engulfed the region) and bottomed in October 2012 a few months after “Whatever it takes.” In response to the upside beat, the euro is holding its recent gains at around $1.165 and European sovereign yields are modestly higher. While European bourses are all rebounding, the DAX continues to lag as Daimler, BMW and Volkswagen are again all trading lower.

Also out in Europe was the French business confidence index that is still riding the Macron wave. This July figure rose 1 pt to 108 and that was 2 pts higher than expected and higher for a 3rd straight month. It’s at the best level since June 2011 and is continuing to creep to the previous cycle peak of 116 in June 2007. Internally, manufacturing confidence was unchanged for a 3rd month while services, retail and building construction confidence all rose 1 pt. The CAC is up by 1%+.

In the UK, the CBI industrial business optimism index for July rose to 5 from 1. The estimate was zero. Total orders though did fall by 6 pts but fortunately price pressures eased as Selling Prices fell by 14 pts to 9. The estimate was 20. Hiring rose to a 3 year high and “hiring intentions for the coming quarter also improved.” Also, “domestic orders expanded at a strong pace, similar to the rate in the previous quarter, and growth in export orders also remained brisk, despite slowing somewhat.” As for output growth, it’s the best since the mid 1990’s. The one caveat is one we all know, stress on the consumer because of falling real wages: “the flipside is the broader hit to consumer spending power across the economy from stronger inflation, which is likely to have fuelled the slowdown in the economy in Q1 and is expected to pull down growth in Q2.”

The BoE next meets next Thursday and just reading this press release screams of a needed rate increase. At least to take away the emergency post Brexit cut which was predicated on economic estimates that have not come anywhere close to being realized. Also, improving the purchasing power of consumers who are seeing higher inflation would go a long way in combating the BoE sole mandate, price stability. The BoE’s chief economist Andy Haldane speaks today. The pound is little changed as are Gilt yields while the FTSE 100 is trying to get back what it lost yesterday.

Industrial Metals Continue To Surprise
The other thing of note this morning is the jump in industrial metal prices. Copper is up by 2.6% and higher for the 10th day in the past 12. The generic contract is at the highest level since May 2015. Nickel prices are at a 3 month high, iron ore is up by 2.4% while aluminum and tin are up as well. As of yesterday’s close, here is a chart of the CRB raw industrials index that has really held the 25%+ rally off the late 2015 lows. I believe the important driver of the rally in industrial metals from that low was the supply response as capacity got sharply cut. I mean even the Chinese have been trying to cut excess production. 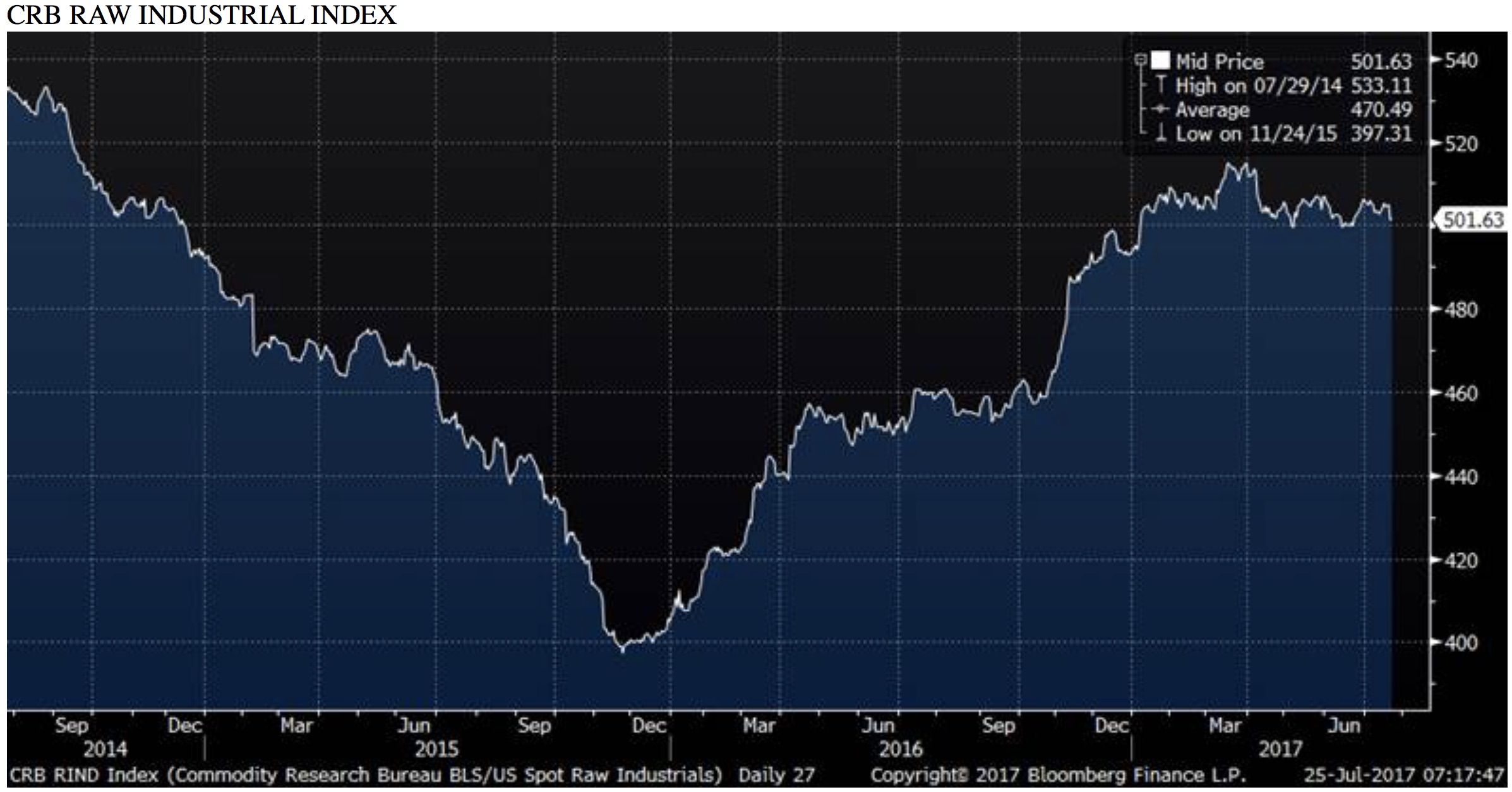 James Turk: This Is About To Trigger The Next Major Move For Gold & Silver