This week saw the perfect storm propel the metals markets higher across the board.

The Perfect Storm
December 13 (King World News) – Ole Hansen, Head of Commodity Strategy at Saxo Bank:  Commodities, not least industrial metals, received a boost this week from news that a phase-one trade deal had been reached. The Bloomberg Commodity Index was 2.2% higher on the week with all sectors recording gains. Once signed by both countries it holds a Chinese promise to buy more U.S. agricultural goods while the U.S. would lower some of the existing tariffs. Apart from metals, softs stood out with coffee extending its two-month surge to 45%.

However, several major obstacles remain before all tariffs are removed and a phase-two deal is now unlikely to be agreed until after the 2020 U.S. elections. A phase-one deal may also attract a lot of scrutiny given U.S. expectations that China will buy up towards $50 billion of U.S. agricultural goods, equalling a sum bigger than what China bought in total from the U.S. during the past three years.

Chinese total demand for soybeans, the biggest of these items, is already down on previous years due to the sharp reduction in its flu-hit pig herd. On that basis the market needs to see more details about which products and what timeframe the two sides have agreed upon. The trade agreement helped drive a soybean futures towards a weekly gain of 3%.

Overall commodities received a boost from OECD’s newest update on global leading indicators. They hinted that the global economy turned a corner back in October, moving from contraction phase into the recovery phase. October was also the month when crude oil and copper, both pro-cyclical commodities, began their current recovery. The uncertainty however is still high and adjustments over the coming months could wash away what, on the surface, appears to be a turning point in the global economy.

INFLATION ALERT: Look At The Big Surge In Commodities This Week 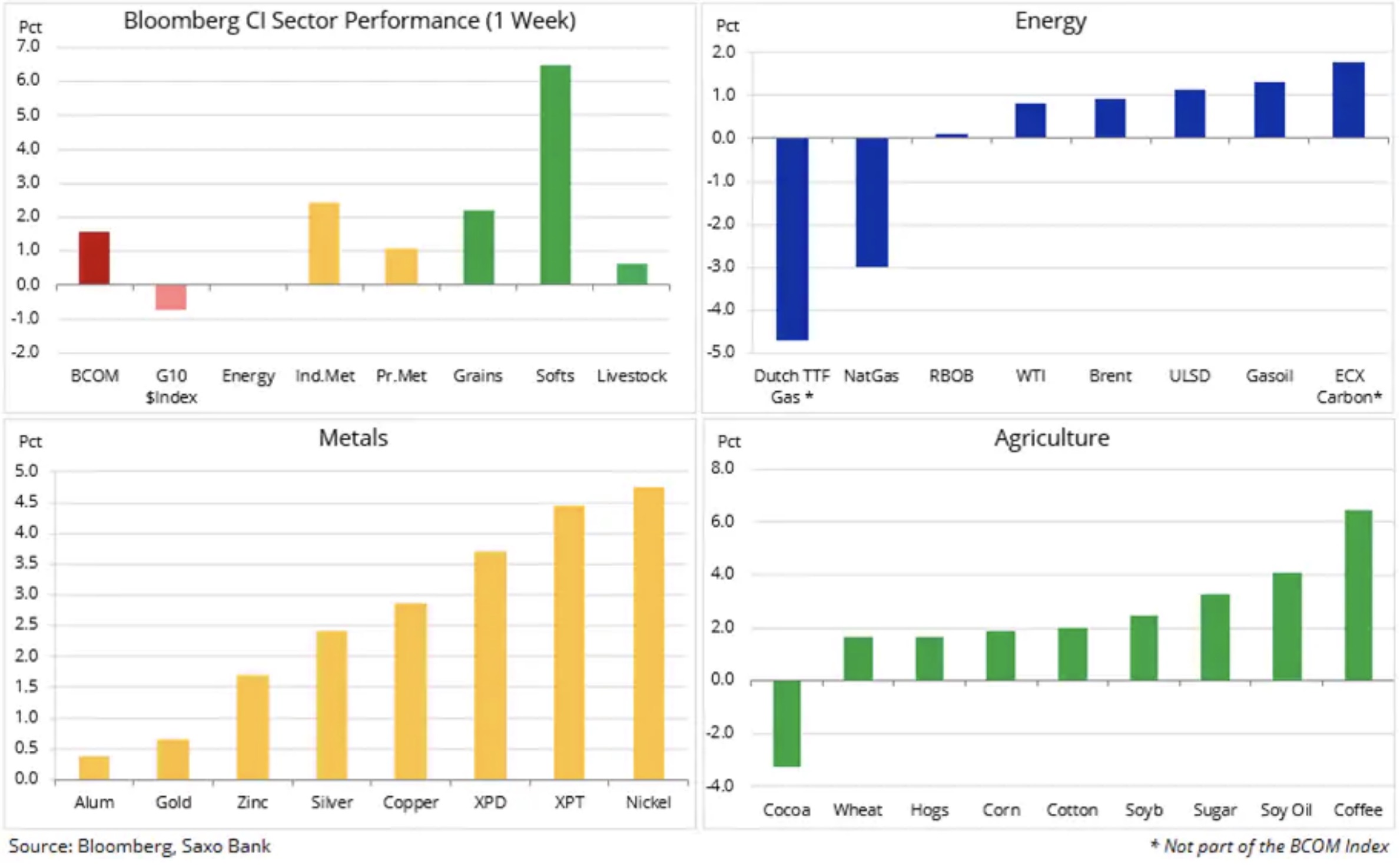 Industrial metals, led by a recovering nickel, and (surprisingly given the circumstances) precious metals all traded higher on the week. A perfect storm of fundamental and technical news helped palladium race towards $2000/oz thereby supporting platinum which saw its discount to gold narrow to $530/oz, a six month low.

Copper Surge
HG Copper’s recent rally through several key technical levels of resistance extended further following the trade news. This has been driven by reports siting a pickup in Chinese demand combined with a drop in inventories monitored by the three major exchanges in NY, London and Shanghai falling to the lowest level since January. Hedge funds covering short positions held since January helped provide the additional momentum driving the market higher. 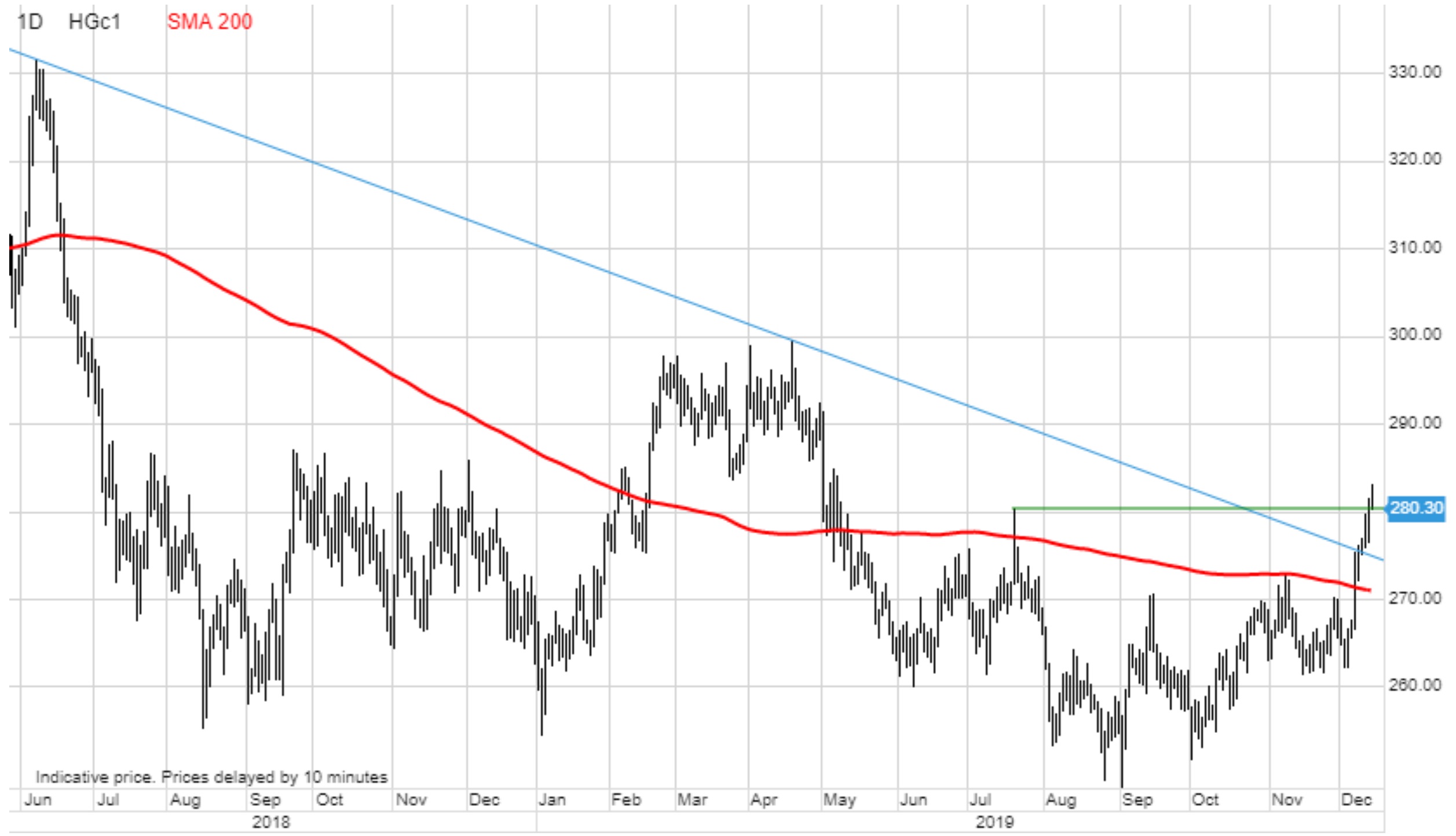 Crude oil continued to grind higher with support being provided by the trade deal news and the OPEC+ group’s decision to cut its production ceiling by an additional 500,000 barrels/day through to next March. The additional and voluntary 400,000 barrel/day cut announced by the Saudi oil minister at last week’s meeting in Vienna was mostly viewed as the Kingdom’s attempt to drive a $2tn valuation of Aramco. Supported by strong demand and one of the world’s smallest free floats of just 1.5%, that level was reached on the second day of trading. Whether such elevated evaluation can be maintained when the next and much bigger tranche eventually hits the market remains to be seen.

Monthly oil market reports from OPEC, IEA and EIA found a small improvement in the outlook for global oil demand. However, the gap between world demand and rise in non-OPEC supply remains and it highlights the need for OPEC+ to keep production tight, especially during H1’20. Over the coming months the market will be focusing on Iraq and Nigeria to see whether they implement the cuts needed to keep Saudi Arabia content with carrying the main burden of keeping prices supported.

WTI crude oil reached $60/b as the uptrend from the October low extended further. We maintain the view that the oversupplied market situation should keep the upside limited while keeping the price within the range highlighted in the chart below. 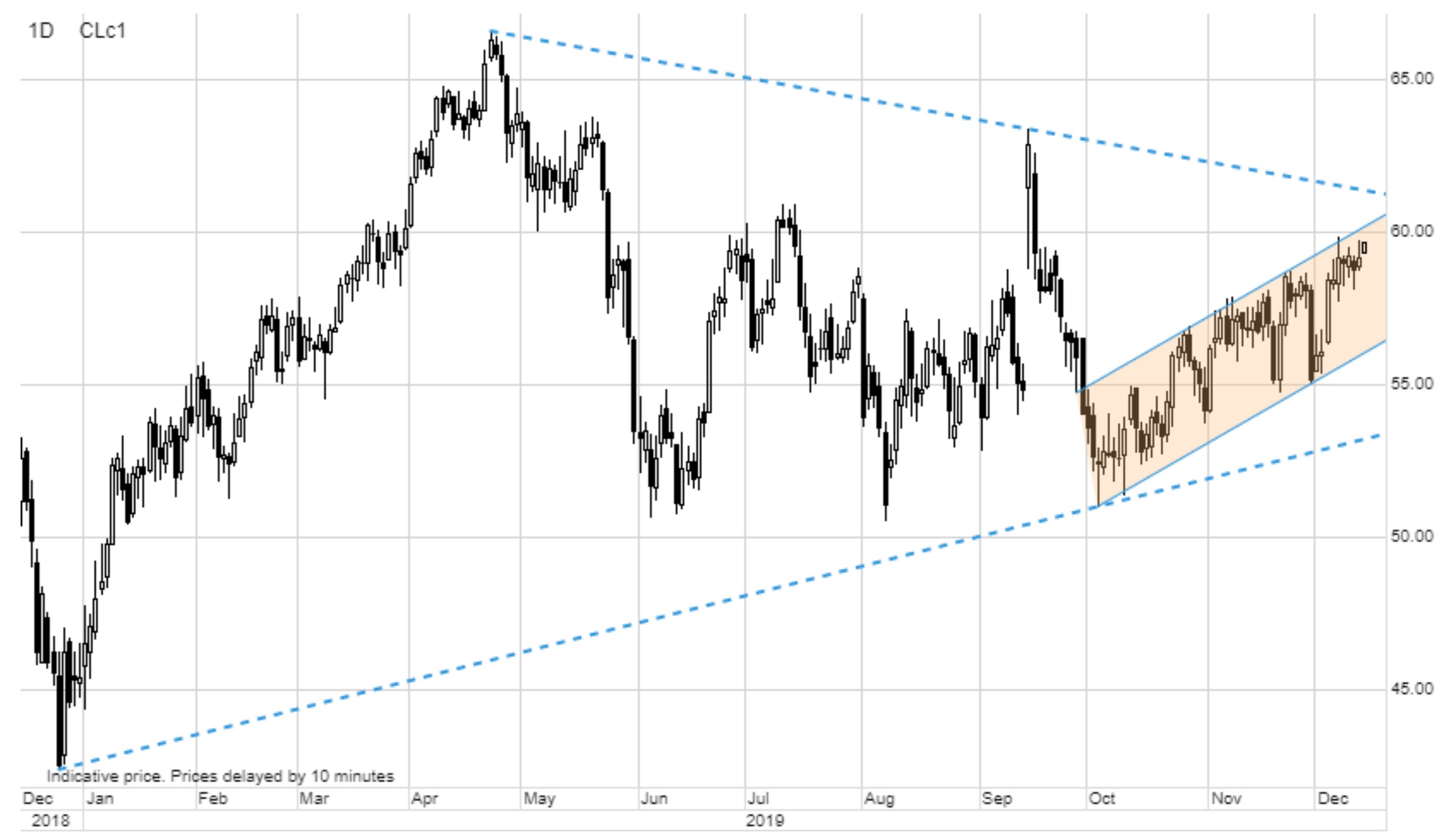 Gold
Gold continues to defy gravity with the price holding firm despite the loss of support from surging stocks, a trade deal in the making, a reduction in future US rate cut expectations and rising bond yields. The latter has driven a drop in the total amount of global negative yielding debt to $11.5tn, a six-month low. It was the surge to a record $17 trillion between June and September which helped gold break out of its yearlong range…

Despite these end of year developments gold has stayed firm above its line of support at $1450/oz. While looking a bit tired and potentially in need of a deeper correction to rekindle demand, we maintain a positive outlook for gold into 2020. This belief is based on a continued low yield environment, very compressed equity return expectations and multiple tail risks.

Miners Are Leading The Metals And Price Of Gold Needs To Punch Above $1,480-$1,490 Area To Breakout 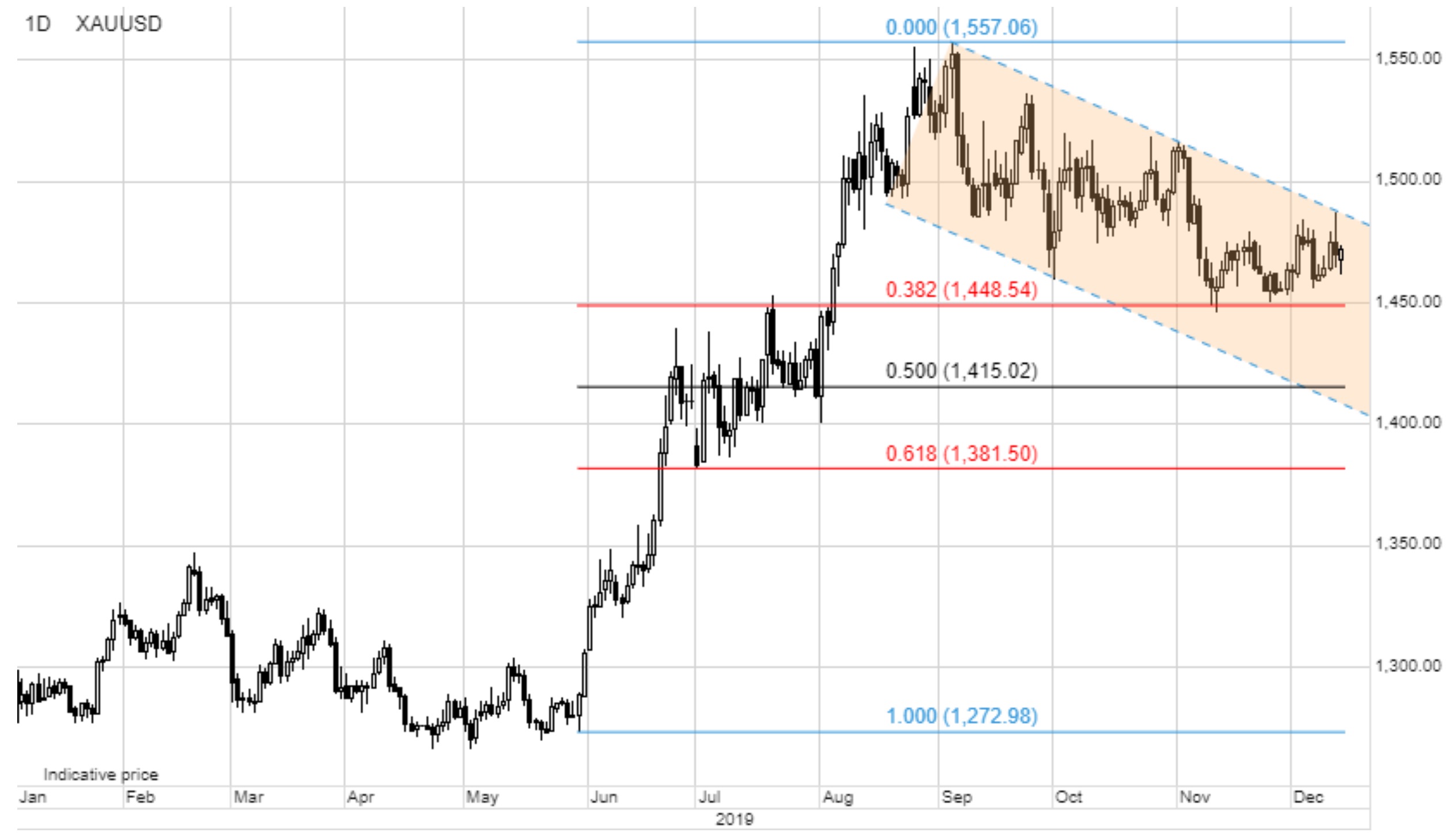 Miners Are Leading The Metals
Graddhy out of Sweden:  “As posted, weekly has confirmed ICL (Intermediate Cycle Low) was 25.98. We have higher highs and higher lows since then. Yesterday´s high secures a RT (Right Translated) DC. On day 21 now so in timing band for DCL (Daily Cycle Low) so we should see a break of red dotted line for a DCL (Daily Cycle Low). My green rounded bottom for pm is on track. (See below). 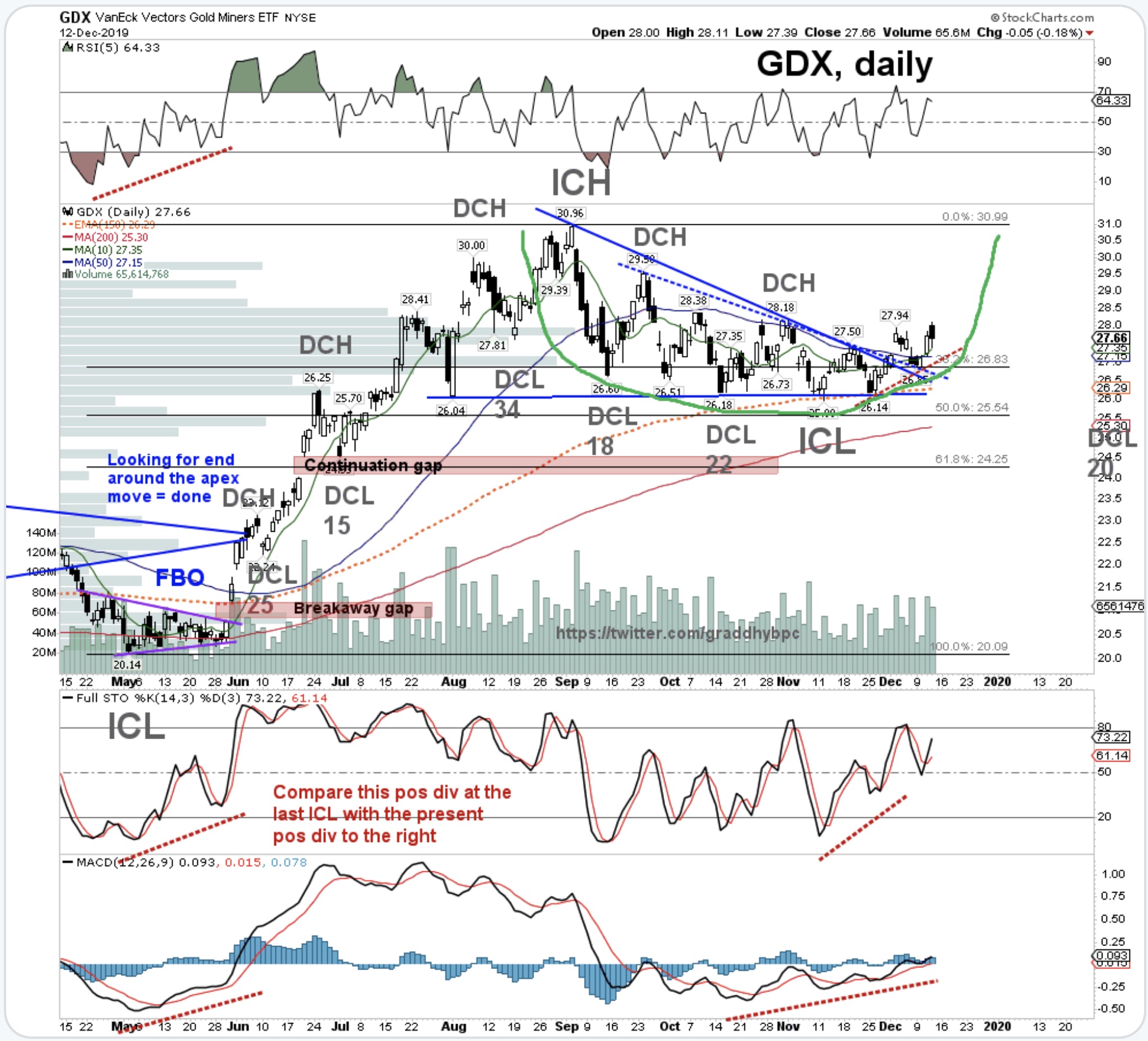 Within hours KWN will be releasing an audio interview!
In the meantime…