Here is a quick but important update on manias, panics, and crashes.

January 31 (King World News) – Peter Boockvar:  Exactly one year ago I dusted off my copy of “Manias, Panics, and Crashes” written by Charles Kindleberger back in 1978 as we were in the heat of the Reddit mania and quoted this in a morning note on February 1st, 2021 from the chapter titled “Speculative Manias”:

“The word mania in the chapter title connotes a loss of touch with reality or rationality, even something close to mass hysteria or insanity. It is used continuously in economic history, which is replete with canal manias, railroad manias, joint stock company manias, land manias, and a host of others.”

He went on to say:

“The a priori assumptions of rational markets and consequently the impossibility of destabilizing speculation are difficult to sustain with any extensive reading of economic history. The pages of history are strewn with language, admittedly imprecise and possibly hyperbolic, that allows no other interpretation than occasional irrational markets and destabilizing speculation. Here are some phrases culled from the literature:

What do periods of manias have in common?

“Speculative manias gather speed through expansion of money and credit or perhaps, in some cases, get started because of an initial expansion of money and credit. One can look back at particular manias followed by crashes or panics and see what went wrong. The tulipmania, part of speculative excitement over many objects, was fattened by personal credit. John Law had his Banque Generale, later the Banque Royale; the South Sea Company, the Sword Blade Bank.”

“The fact is that money, defined as means of payment in actual use, has been continuously expanded, and existing money has been used ever more efficiently in periods of boom to finance expansion, including speculation.”

I highlight all of this for a few reasons:

1) Human nature NEVER changes and what seems like a new era is just a repeat of a previous one but just in a different form.
2) Easy money is the foundation upon which bubbles of any kind form but when monetary policy begins to change in reverse, valuations matter.
3) Buying a stock is not an act of rebellion and sticking it to the man, it is acquiring a partial ownership in a company.

The peak of Gamestop was made on January 27th , 2021. ARKK topped out on February 12th, 2021. Around that time I also included a few E-Trade commercials from 1999 to also highlight how online trading last year was not new however it was portrayed as a new revolution created by Robinhood. Here was my favorite, https://www.youtube.com/watch?v=hm8_MFdFpeE

Moving On
Moving on. I want to reiterate my belief that the peak in the rate of change in inflation will come in either February or March and that the intense pressures seen will begin to ease. If correct, the only question then is how soon and quick does it decline. I’ll continue to argue that inflation will remain sticky and that a 3-4% range will be the first settling point and we are not going back to 1-2% anytime soon.

To this, I thought Colgate Palmolive had some really interesting comments on their earnings conference call on Friday with regards to inflation. It’s helpful too to hear from consumer product companies generally as many of their products are necessities at low price points (like toothpaste, soap, deodorant, etc… in this example) and thus is very informational on how consumer behavior reacts to price changes. The CEO said:

“no question, given the size of the pricing that we’re taking around the world, and you’re seeing that from ourselves as well as competitors in other categories, you will see a falloff in volume…So the makeup of the organic growth this year, no question will be driven more by price than by volume, which is a little bit different than what we’ve seen in historical years.”

I say, they are therefore willing to lose volume because they believe the best way to recapture margin is via price. And, everyone is doing the exact same thing in their industry so they can get away with it.

It’s Early Days
He went on to comment on this:

“I’ll say that all boats rise in this environment in the sense that everyone is impacted by the inflationary environment. So as a result, you’re going to see pricing up pretty consistently across all categories. That plays, as you’ve heard from others, into elasticity that you’re not seeing one competitor move, you’re seeing the category move. So elasticity tends to be a little bit less. We will see. It’s early days now.”

I say, so everyone is going to pay more for toothpaste, toothbrushes, shampoos, soap and deodorants because EVERYONE in the sector is taking the exact same pricing measures. This is what sticky inflation is made of on a micro level.

With respect to non voting member and Atlanta Fed president Raphael Bostic’s comments in the FT that they could hike 50 bps at one meeting if needed, he also said he’s sticking to his forecast for three quarter point increases this year. Thus, anything is possible either way and I just think he was warning all of us that the Fed is serious about the challenge ahead of having rates at zero and inflation at 7% and they want to do something about it. He said “Every option is on the table for every meeting.”…

Over The Weekend
Over the weekend China said its state sector manufacturing index for January fell a touch to 50.1 from 50.3, thus flatlining in the month. The estimate was exactly 50. The services component was weaker too, falling to 51.1 from 52.7. With manufacturing, new orders and backlogs remained below 50 as did employment and inventories. Prices pressures accelerated. But, there was hope for the future as overall Business Activity Expectations increased to 57.5 from 54.3. A similar story played out with services. The Covid stance of the Chinese government post Olympics and how this residential real estate situation plays out will both combine to dictate Chinese economic growth this year.

The private sector January Caixin manufacturing PMI also came out and it fell below 50 at 49.1 from 50.9. The estimate was also 50. Caixin said simply, “The recent uptick in Covid cases in China, and subsequent round of fresh restrictions, weighed on manufacturing performance at the start of 2022.” They also said this, “New export business meanwhile fell at the quickest pace since May 2020, and supply chain delays worsened. Average input prices rose at a slightly quicker, but modest rate. Prices charged meanwhile increased following a slight reduction in December.” Similar to the state sector optimism, “Manufacturers were confident that output would increase over the next 12 months, often due to forecasts that market conditions will strengthen as the pandemic is brought under control.”

Chinese markets are closed for the holiday but the Hang Seng was open and it rallied by 1.1% and the H share index was higher by 1.7%. Both are up for the year after yesterday’s notable decline. The Hang Seng index trades at just 11x earnings with a dividend yield of 3% by the way. Cheap.

Ahead of the German CPI print at 8am, Spain said its January CPI rose 6% y/o/y, ahead of the estimate of up 5.3%. In response, the Spanish 10 yr inflation breakeven is up by 5 bps to 1.77%, the highest since mid November. 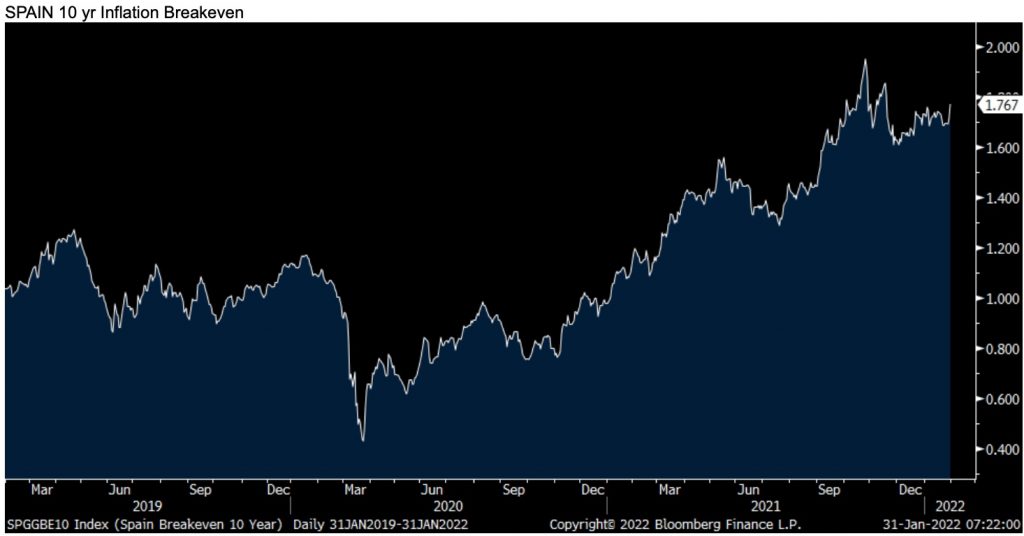 The 5 yr 5 yr euro inflation swap is up by 1.6 bps to 1.84%. European bonds are lower across the board with yields higher. The German 10 yr yield is back to ZERO, FINALLY. 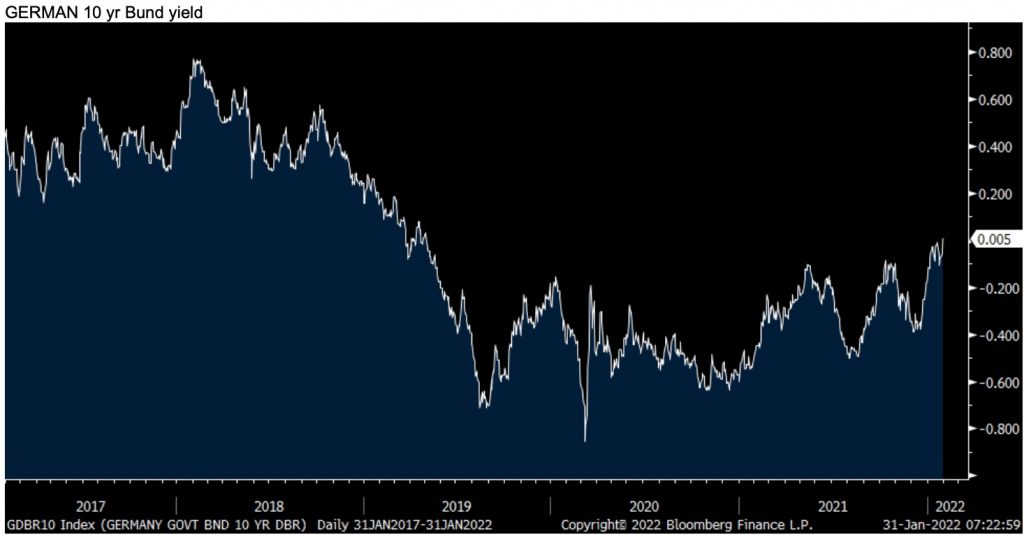 To listen to Dr. Stephen Leeb discuss what is next for the gold and silver markets and much more CLICK HERE OR ON THE IMAGE BELOW.

***To listen to Alasdair Macleod discuss what is next for the gold and silver markets CLICK HERE OR ON THE IMAGE BELOW.

Gold Surges $25 And Silver Soars 3% As Global Panic Continues, Plus The Most Important Red Line Of Any Chart In History