This is a very worrisome look at the most terrifying danger facing the United States, plus this could ignite the gold price to $20,000.

September 6 (King World News) – Stephen Leeb:  I’m not a poker player, but I know enough about the game to know that if I did play, I would want my opponent to be either complacent or desperate. Desperation and/or complacency invariably augur big losses.

The U.S., unfortunately, offers a tragic example. Years back we became deplorably complacent. And that has led to a situation where, whether it’s widely recognized or not, we are in a desperate situation with respect to China. There are three ways it can end: lose-lose; win-win; or win (China)/lose(U.S.) with China becoming the world’s hegemon. These three very different scenarios share one common denominator: They all point to huge gains in gold (and possibly silver as well).

Where did the U.S. go wrong? For more than a generation following World War II, we were arguably the greatest country in modern history. While far from perfect, we had basic freedoms, a strong economy that to a considerable degree spread the wealth around, and a high level of social cohesion. For practical purposes we ruled the world…

But that success bred a false sense that we could have it all and get away with anything. Vietnam was the first manifestation of that belief, but we could have recovered if we’d been willing to tighten our belts. Instead, we kept domestic and military spending both at a high pitch. And then, in 1971, we ditched the gold standard, effectively abandoning any possibility of monetary discipline. Still, on the surface, all seemed well. Our overwhelming military superiority allowed us to establish the petrodollar, which ensured the dollar’s continued reign as the undisputed global reserve currency, and with no apparent need to curtain our spending on anything we wanted.

But (as I detail in my latest book, “China’s Rise and the New Age of Gold”), that was the high point for the U.S. Since then, during the past half century, we’ve been in decline – first gradual but over the past generation accelerating. Meanwhile, China has been rising. We still have the largest military, but it lacks the tools to keep China from establishing control of Eurasia and indeed of the entire East, as well selected developing countries in the West. China is the world’s largest trader. And by what I consider the most important measure of an economy’s size, purchasing power parity (PPP), China’s economy already is larger than ours.

So we have grown desperate, trying to use the remaining remnants of our past glory – the continued dominance of the dollar as the world’s reserve currency and our strength in a few areas of technology, namely semiconductors – to push back against China. But these measures are destined to fail, in fact to backfire. What’s left of our technological lead is diminishing and will vanish, while the dollar’s dominance is in its end days.

Before looking ahead to what comes next, it’s worth looking back to one salient example of where we went off track, and it has to do with our ability to ensure that we have critical resources. According to the United States Geological Survey (USGS), the agency that monitors important statistics regarding commodities, over the last 25 years the U.S. economy has grown steadily more dependent on other countries for critical materials. The table gives the grim results.

In the mid-1990s, the U.S. level of self-sufficiency (defined as less than 50% of a resource being imported) applied to more than half of the critical materials followed by the USGS. That has dropped to less than one-fourth of critical materials. But that’s just part of the story. It gets worse – something that literally gives me nightmares.

The Most Terrifying Danger Facing The US
USGS was tasked with listing and describing in detail the commodities most critical to vital industries, including renewable energies, information technology, and advanced military operations. It identified 20 such critical commodities, without which these sectors could not function. Today the U.S. produces more than 50% of what we need for just four of the 20 – or 20%. And two of those four, beryllium and lithium, require other commodities in order to be used in their most important applications, including electric vehicles (EVs). How dependent are we on other countries for those additional essential commodities? We are 100% dependent. Moreover, there are six additional commodities for which we import 100% of our needs.

How did this happen? Complacency is the operative word, but there are some telling specifics. In the early and mid-1990s, the U.S. was the world’s leading producer of refined rare earths (REs), with imports of these essential resources about 2% compared to 100% today. Because of my interest in REs, a friend forwarded me an article by freelance journalist Robert Golomb, and I spent quite a bit of time verifying the research. Unfortunately, it appears to be spot on. 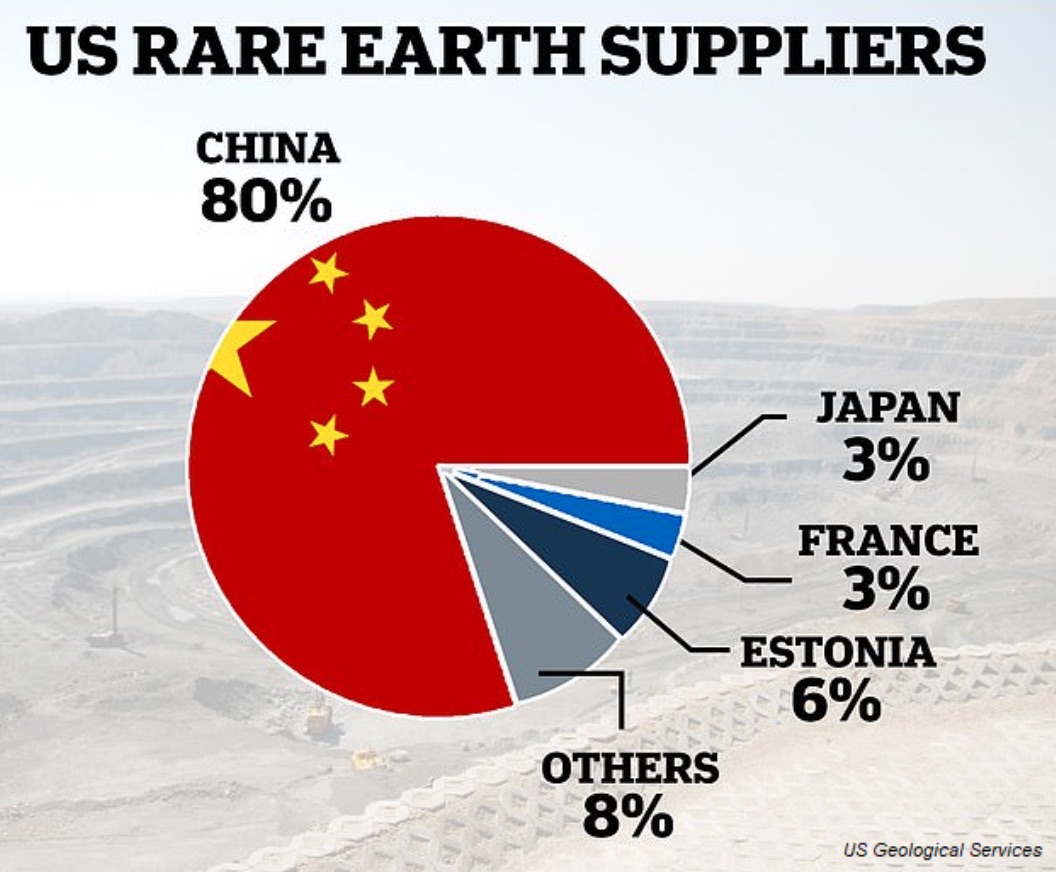 To summarize, our leading rare earth mine was closed in the mid-1990s for environmental reasons. Without production of REs, we sold our refinery technology to the Chinese for $70 million. As time passed the Chinese further developed this technology – which amounts to a multipart supply chain that is extremely difficult to duplicate. The result was that in 15 years, China became a fully integrated producer of REs. It supplies about 80% of the world’s needs and 100% of our needs (see chart above). 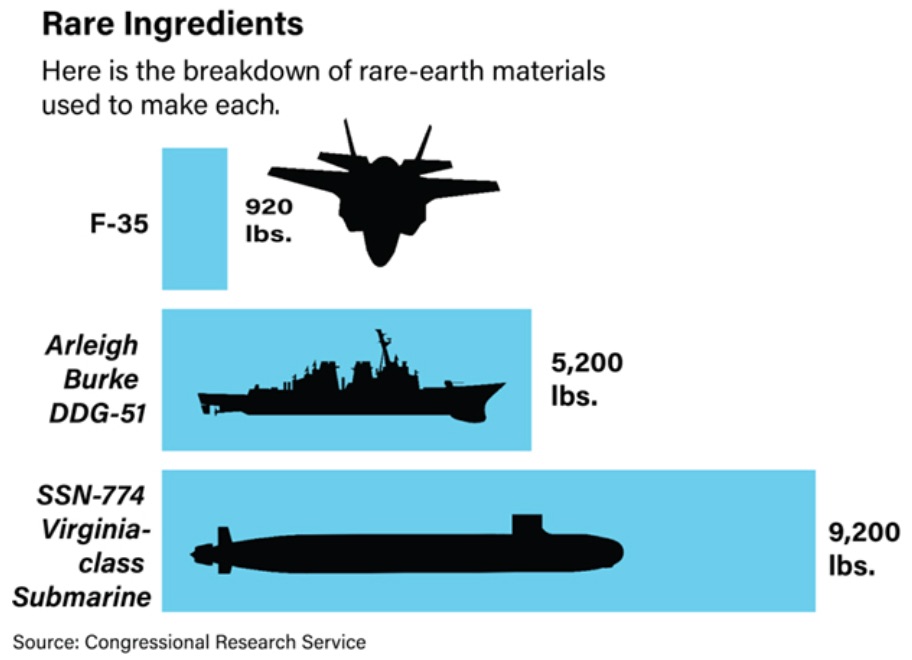 In other words, under three different presidents – Clinton, Bush, and Obama – we gave away the wherewithal to make the most powerful permanent magnets, which are produced with REs. Without these magnets, our military’s weaponry would be no more advanced than in the late 1970s. Virtually all our information technologies also use these magnets. They even have an important role in oil refining and renewable energies.

“I think we are at a point in this country—and this is something we’ve talked about on this committee—[where we need] to develop a rare-earth national security policy for the United States. … We would be foolish if the American government didn’t come together and say, we are going to procure and secure the rare-earth metals needed from us instead of having to depend on any other country,” — Rep. Ted Yoho (R-Fla.), chairman of the House Foreign Affairs Subcommittee on Asia and the Pacific, at an April 26, 2017, hearing.

For the time being, however, defense lasers, batteries, displays, magnets, and other components—thousands of pounds of rare-earth elements in some advanced weapons systems—will continue to be purchased in a volatile marketplace dominated by one nation, China.

China controls much more than REs. It is a leading exporter of the commodities necessary for EV batteries and of commodities like gallium that will replace silicon in the next generation of semiconductor materials. It is no surprise that China recently announced a more than trillion-dollar effort to develop these materials, which promise integrated circuits that can run faster and consume less power than today’s. According to Asia Times, China plans to leapfrog the U.S. A recent article by David Goldman, offers evidence to validate the article’s headline, which reads: “Huawei sanctions will destroy U.S. chip industries.” I wish I could find fault with the reasoning, but the harder I try, the less sleep I get.

Above I noted that semiconductors remained one area where the U.S. still leads China. But actually, it’s no longer U.S. companies that lead in today’s most advanced integrated circuits. Rather it’s the Taiwanese company Taiwan Semiconductor, which has left former longtime star Intel one or two years behind. (Having to write this paragraph sticks in my craw in a really personal way. Years ago, when I was just starting out in this business, I came in first in a Forbes stock-picking contest by selecting Intel. As an investment adviser, Intel was one of my favorite stocks for decades. Last year, I sold it and replaced it with…Taiwan Semiconductor.) And yes, you could argue that Taiwan Semiconductor will ignore or at least hide its violation of U.S. sanctions against Huawei.

So it has come to this: The only real edge the U.S. still has today is that most international trade continues to use the dollar, which has clung to its position as the world’s reserve currency. Using our currency to sanction China and try to destroy their companies has the smell and feel of desperation. It is not surprising that the sanctions so far appear to have backfired – motivating China to accelerate what it already was planning to do, i.e., ramp up its own technological capabilities.

A Gold-Centered Monetary System
Moreover, the dollar’s primacy is in growing jeopardy. As I recently mentioned in a previous interview, China is proceeding full throttle with developing a digital currency, which it is currently testing domestically. At the same time, China also is opening up its financial markets, with many foreign players, including American firms such as Citi Corp. and Blackrock, establishing their own ventures in China. The digital currency combined with a more open market are steps that will accelerate implementation of a gold-backed digital basket of currencies that will replace the dollar. Note that China isn’t looking for its currency, the yuan, to replace the dollar. Its aim is a gold-centered monetary system built around a basket of currencies.

What options does the U.S. have? There is no doubt that China in many ways is a bad actor. Equally, there’s no doubt that we’ve been complicit in our own decline, as the tale of rare earths illustrates. But given where we are, I believe we’re only worsening our plight by treating China as an existential threat to us. It’s short-sighted to try to land lethal blows to China on all fronts. If one of our sanctions really hit home, China, which so far has refrained from serious retaliation, might feel cornered. It could choose to ban exports of rare earths. Americans’ access to critical medicines also could be at risk: China exports ingredients essential to major parts of our drug industry, including most antibiotics.

We don’t have to let it get that far. There’s reason to believe that when China says it seeks cooperation, it isn’t just words – it means it. I think it’s significant that its military isn’t designed to fight a world war. Its nuclear arsenal is a small fraction of ours and of Russia’s. Rather, China’s military is designed to constitute an impenetrable defense.

Road To $20,000 Gold
The U.S. opting for a win-win scenario, in which there is cooperation between the two powers, could go a long way to solving our own problems. Yes, the dollar would likely fall dramatically, and inflation would likely surge (something I expect in any case). But one upside to the U.S. from such events would be to weaken the outsized role in the U.S. economy of our financial industry, which for many reasons has been a real negative for the country and for most Americans.

For gold aficionados, the bottom line is that gold is going a lot higher, to $20,000 and beyond. Depending on its choices going forward, the U.S. may end in a better or worse place than otherwise. But regardless, gold investors will end up way way ahead.

***To listen to the powerful audio interview with former US Treasury Secretary Dr. Paul Craig Roberts where he discusses the coming crisis, gold, silver, the everything bubble and how it will end and more click here or on the image below.