As the world edges closer to the next crisis, today the man who has become legendary for his predictions on QE and historic moves in currencies, told King World News that people need to get prepared for worldwide chaos.

The Coming Chaos And Hyperinflation
April 23 (King World News) – Egon von Greyerz:  “The coming hyperinflation will start slowly and few people will realize what is coming. But once the first real inflation signals are appearing, the process will unfold very quickly as the currency debasement accelerates…

Egon von Greyerz continues:  “Right now we are most likely seeing the first signs of inflation. The rising CRB index, together with rising oil, silver and interest rates, are all telling us that inflation is coming. Initially, we will see a gradual increase, but soon inflation will accelerate until in the next few years we reach hyperinflation.

Of course, nobody sees hyperinflation as a credible outcome of todays’s low growth environment. But hyperinflation is a currency event and it will come as a result of all major currencies finishing the move that started with the creation of the Fed in 1913. Since then, all currencies have fallen 97-99% in real terms. So there is only 1-3% to go to reach zero. However, the problem is that they won’t just fall 1-3% but 100%. This will be achieved by massive money printing in an attempt to save a debt infested global economy.

One Way The Elite Steal From People
So why will central banks now succeed with creating inflation when they have failed for so long? They have for some time used their two major tools to create inflation by printing money and lowering interest rates to zero or negative. But why do they want inflation since it destroys the value of money? For example, an inflation rate of average 3% halves the value of money in 24 years. What is desirable about that?

The simple answer is that inflationary growth creates the impression of real growth. Inflation gives the illusion that people are better off, but the sad reality is that it allows the elite to steal from the common man and woman through the insidiousness of inflation.

So in spite of unlimited money printing and credit creation, governments around the world have failed to create their desired growth by inflation. The reason for this is that the velocity of money has declined to the lowest levels for over 60 years. As the graph below shows, money supply is up 16x, from $0.9 trillion to $15 trillion since 1981. At the same time, the velocity of money has declined by almost 2/3rd. 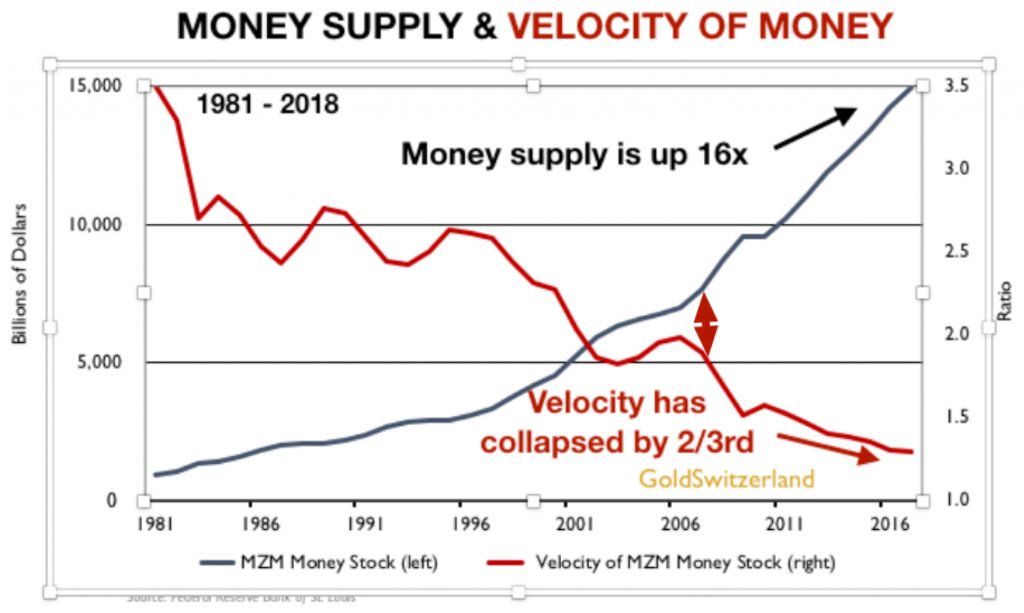 The more money that is printed, the less it is used. As the chart shows, money printing goes exponential from 2006, but velocity crashes. This is really a paradox and a new phenomenon. There are some simple explanations. First, the printed money is not reaching the people. The banks have not been lending the printed money as they were more interested in shoring up their weak balance sheets. So where has all this printed money gone? The banks have used it for their own trading. It has also gone to the benefit of the top 1% or less who have invested in stocks, bonds and property. In these asset classes we have seen massive inflation fueled by cheap money and unlimited credit. But those figures don’t show up in the official inflation numbers or the velocity ratio.

Another reason why velocity and inflation are not going up is that the world is now over borrowed and ordinary people have so much debt that they can’t take on any more. We have reached debt saturation and the printed money is not creating growth. And why should it?

If printed money could create wealth, we could all stop working and just print more. As the graph below shows, since 1971 total US debt has gone up 47x from $1.5 trillion to $70 trillion, while GDP has gone up only 19x. 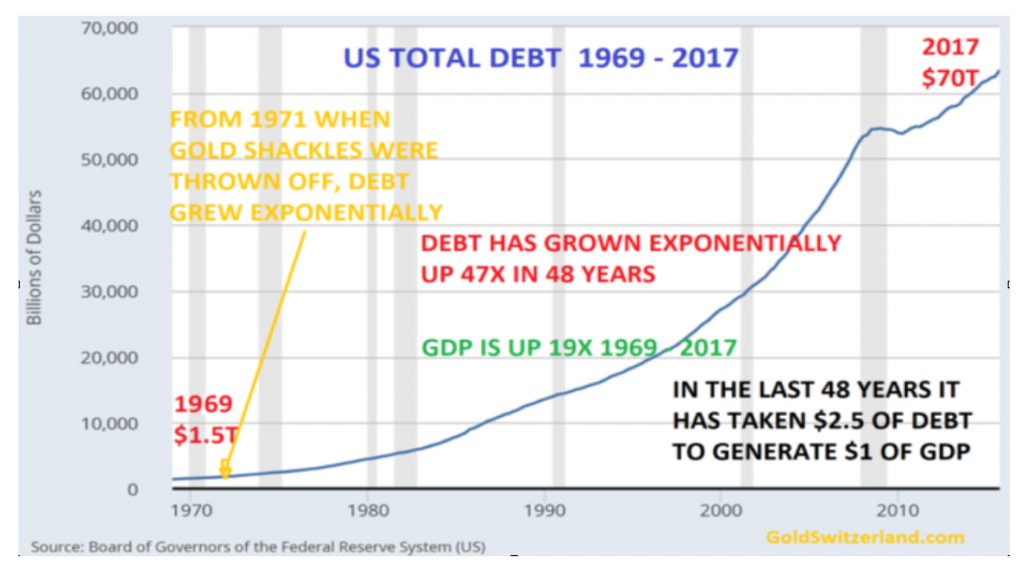 Thus, in the last 48 years it has taken $2.50 to create $1 of GDP. This means that the US is running on empty. The country can’t even grow by printing money. How can the US grow when QE stops and QT (tightening) starts, combined with higher rates? The simple answer is that it can’t. The US economy will come to an abrupt halt very soon and go into a massive reversal in coming years.

US 10-Year Treasury In Danger Of Breaking Key Psychological Level Of 3%!

The 35 year cycle chart, which touched all-time lows in 2016, has now turned up with a vengeance. Although we will see corrections, the trend in rates is now strongly up and the current cycle will not turn until rates are in the high teens or even higher.

Bear Market In Bonds Has US Interest Rates Set To Skyrocket Into The Teens! 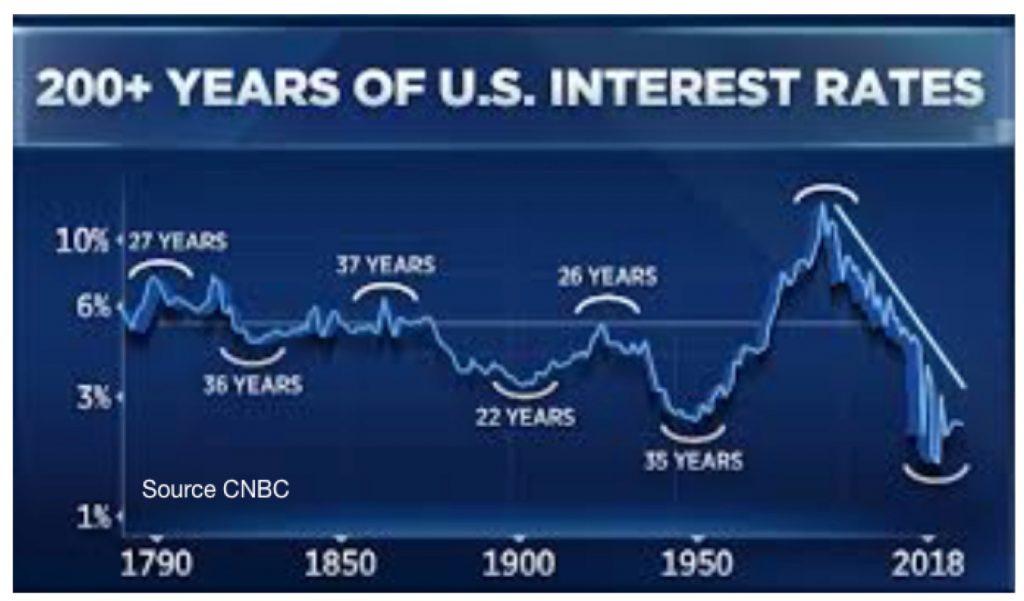 Higher rates will come as a result of higher inflation and defaults. Credit markets will become very risky and lenders will only lend if they get paid for the risk. Bond holders will also panic out of the market when they realize that they will never be repaid with real money. I have never understood how anyone can lend money to bankrupt governments who at best will repay the money with more borrowed funds in a debased currency. More likely, most governments will default, although they will find another fancy name for it like moratorium. So anyone holding government bonds is likely to end up with nothing but a worthless IOU.

Oil is also in a strong uptrend, which is likely to reach the 2008 highs of $150. Oil is already up 260% from the 2016 lows. A global economic downturn would speak against that but there are many other factors that will drive the oil price up. First, oil is still priced in dollars, although that will change gradually as the Petroyuan gains hold. But a collapsing dollar will lead to a record price of oil in US dollars. So would any geopolitical conflict, with Saudi Arabia or Iran especially. 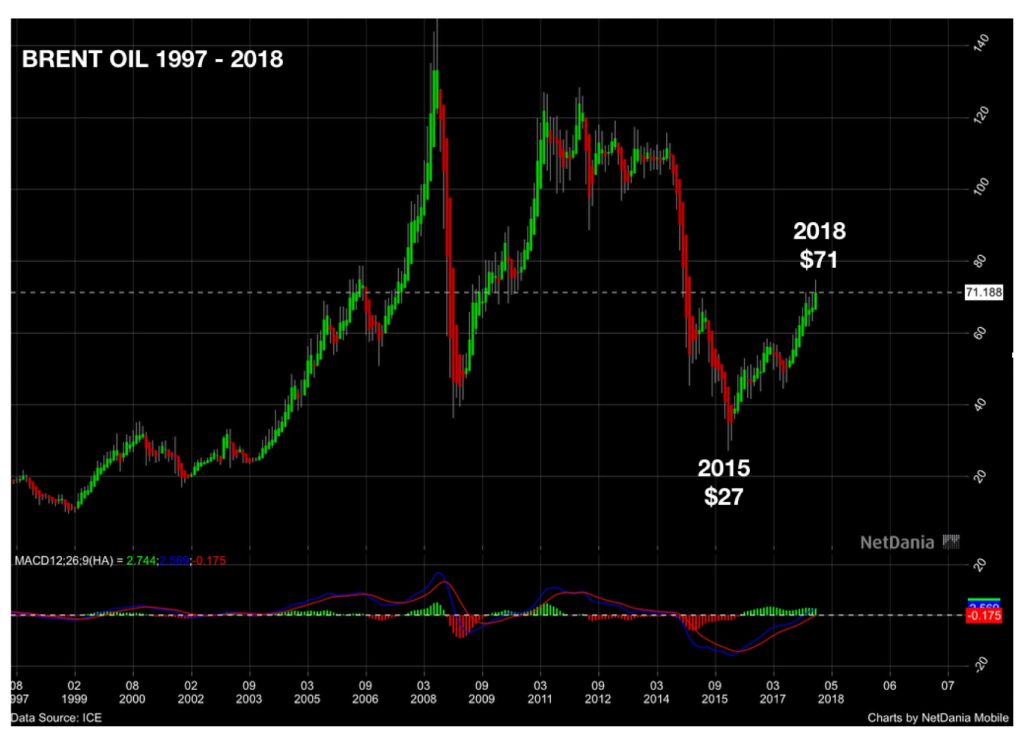 Finally, silver has broken out at the apex of a 2 year triangle. This is a very strong indication that silver will now start a major move that will reach multiples of the present price. (See my KWN article last week).

The Gold / Silver ratio is a very important indicator of the trend in the precious metals. I have previously written about the importance of the 80 level in the ratio and the fact that every time that level is reached, it turns down. We have just seen a 5% fall in this ratio in the last few days. Normally when the precious metals turn, silver is the leader and it now looks like silver is taking the lead in the next phase of the bull market for gold and silver.

Since we are very likely to go into a hyperinflationary economy in coming years, let us just remind ourselves what that means in relation to gold.

37,500,000% Inflation In Venezuela! But Venezuelans Who Owned Gold Kept Their Wealth Intact! 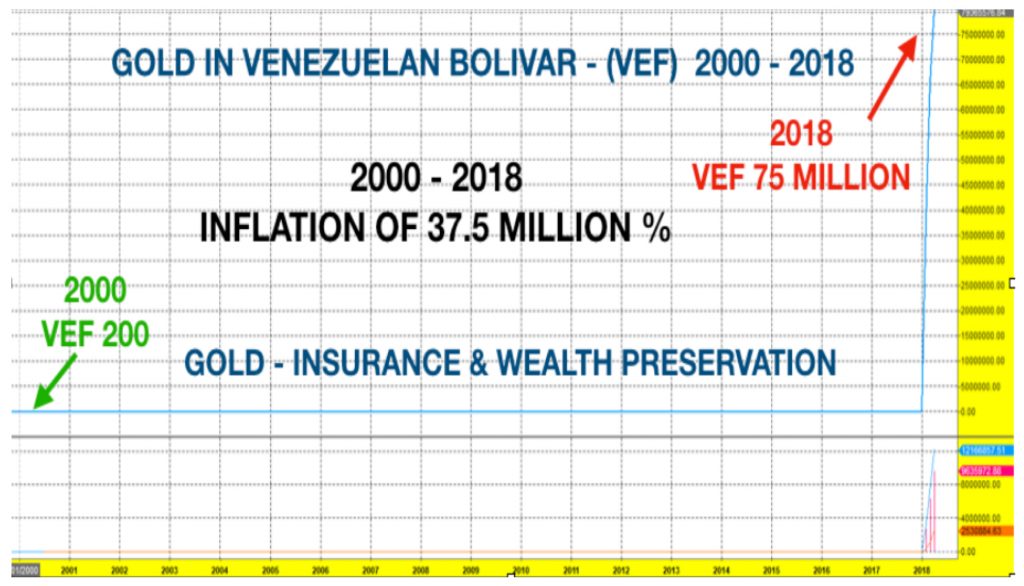 In the chart above you can see gold priced in Venezuelan Bolivars. It moves up exponentially every week. The price has gone from VEF 200 to VEF 75 million in this century and that won’t be the end.

We will see similar moves in all currencies in coming years including the Dollar, Euro, Pound, Yen etc. But don’t see physical gold and silver as a way to make money. Instead, buy it as critical life insurance because without it your wealth will not survive.” IMPORTANT: Here is 7 minutes of the greatest Egon von Greyerz audio interview ever and I would encourage everyone around the world to stop what they are doing and listen to it immediately by CLICKING HERE.

***ALSO JUST RELEASED: ALERT: A Stunning Look At What The Smart Money Is Doing Right Now CLICK HERE TO READ.

ALERT: SentimenTrader Issues Another Crucial Update On The Gold Market