As we continue to kickoff the new year, here is a look at the most important numbers of 2020 and the “Golden Future” of 2021.

The Facts & Numbers of 2020, the Golden Future of 2021
January 3 (King World News) – For the second week in a row, Matt Piepenburg at Matterhorn Asset Management is pinch hitting for Egon von Greyerz this week and he hit it out of the park once again! Here is his fantastic article:  Below, we take another deep dive into the lessons of history, math and objective facts as one year replaces another in a global market increasingly on edge.

The Most Important Numbers of 2020
As we say goodbye to 2020 and look toward 2021, the key numbers on my screen and mind have nothing to do with dates yet everything to do with this: 14.

14 is the number of trillions by which the aggregate money supply increased in the U.S., EU, Japan and eight other developed economies in a single year, 2020.

Of course, other numbers matter in ways which can’t be fully fathomed, such as the 1.7 million deaths attributed to a global pandemic of the same year which has sent the global economy into a crisis not seen since the Great Depression.

And speaking of depressions, in terms of inflation-adjusted GDP growth rates per capita, the classic measure of a depression, we are clearly experiencing one now, and have been since before COVID. 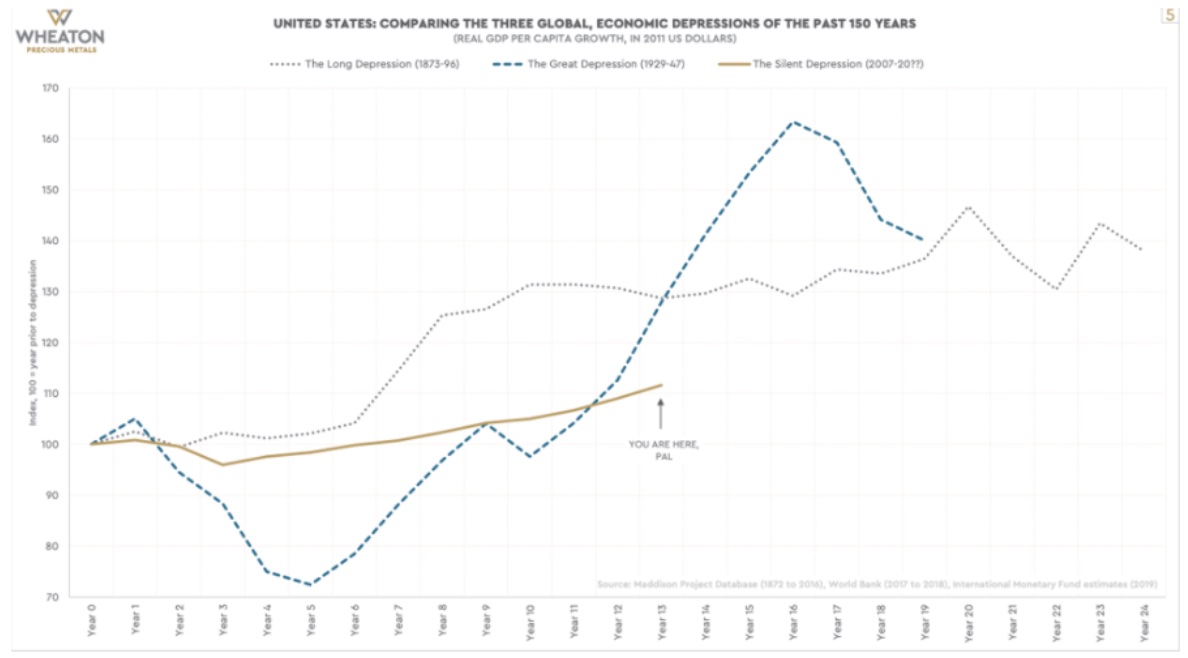 As to other memorable 2020 numbers, and despite open evidence of an economic depression, the DOW shot past 30,000 as global GDP tanked, economies plunged and death counts mounted, proving yet again that there’s very little a money printer at a central bank near you can’t do to support a Frankenstein securities bubble.

In short, as viral risk locked us all indoors, every risk asset, from credits, equities to crypto’s saw a risk-on high (including a 66% surge in the MSCI All-Country stock index) that would make any market bull blush, then sneeze.

And if that wasn’t enough to make one question the death of capitalism and rational price discovery, the fact that 2020 also saw record low yields for junk bonds and a 5X increase in the price of Bitcoin ought to be evidence enough that investors are enjoying a collective madness led by an equally mad cadre of blind central bankers.

Instead, one merely needs to understand the fundamentals a gin or vodka martini.

That is, the more you drink them, the better you feel, the crazier you behave, and the dumber your decisions.

Then of course, comes the hangover…

That too is a basic law of the Martini Affect: Too many martinis will make you sick.

Of course, while drinking martinis, such sober considerations vanish—replaced instead by an almost mad optimism, i.e. the kind of drunken behavior otherwise known in the markets as a mania.

Taking this metaphor further, the amount of fiat currencies created in 2020 has made even the savviest of investors look a bit silly, like a casino of James Bonds drinking vodka from an embarrassing fire hose rather than suavely debating the merits of shaken vs. stirred.

At $94.8 trillion, the flood of fake money (lauded as “stimulus”) now splashing through the financial casinos from Wall Street to Tokyo is frankly comical rather than as devastatingly clever as an Ian Fleming hero. 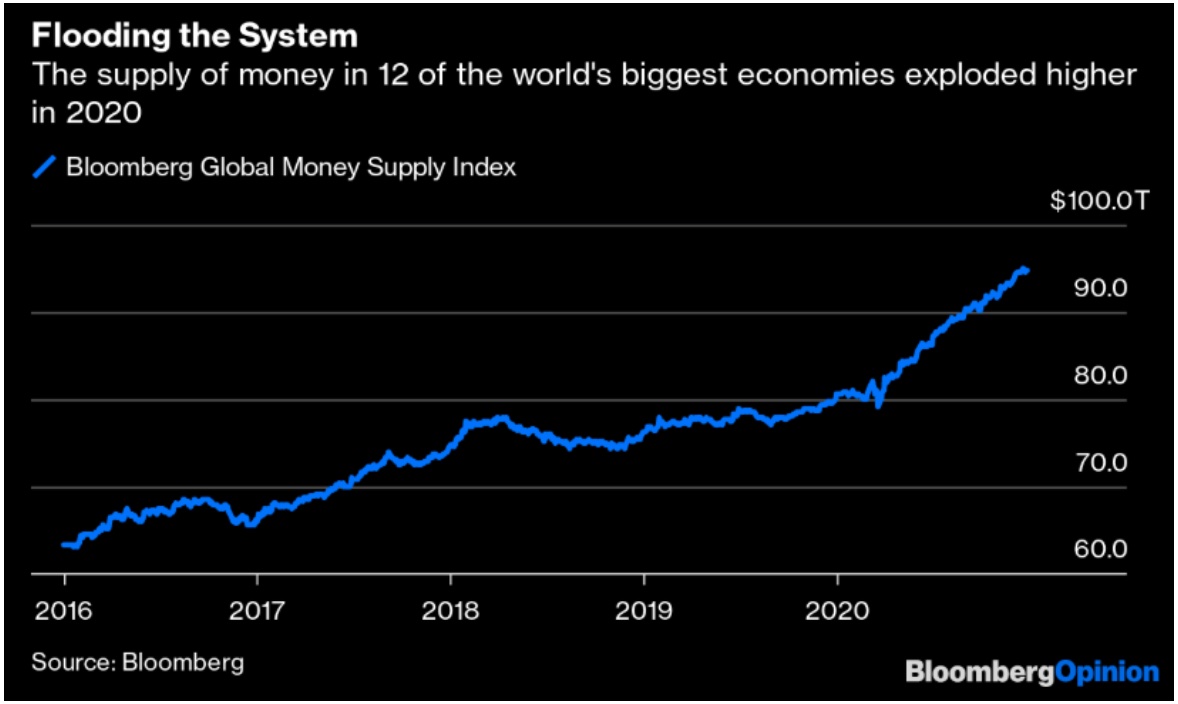 Instead of heroes, global markets are now led by anti-heroes, each pandering for a book deal, vote, cabinet post or positive tweet by dumping liquidity into already grossly inflated markets for near-term market applause at the expense of long-term economic pain—namely, the hangover of all time.

Rather than applaud these central bankers (Bernanke’s book was literally entitled “The Courage to Act”), we ought to have the courage to hand them a blindfold and last cigarette, for the central banks have literally drowned (i.e. murdered) global currencies via a monetary policy that future history students will one day equate to monetary waterboarding.

Taken as a whole, the balance sheet assets of the Federal Reserve, the European Central Bank, the Bank of Japan and the Bank of England are now above 54% of their countries’ total GDP. 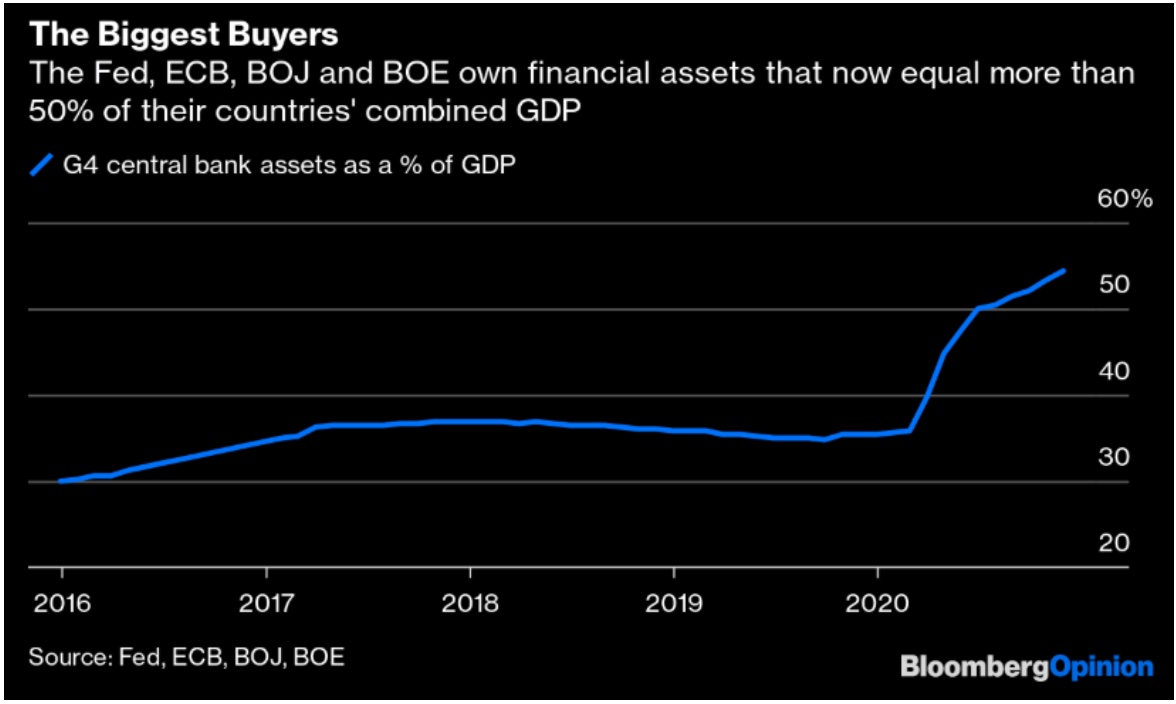 As I type this, Bernanke’s drunken (courageous?) heirs at the Fed are pumping $120 billion a month out of thin air to purchase otherwise unwanted sovereign IOU’s to save risk asset markets as real economies crawl on all fours.

Thanks to the Martini Affect of liquidity drunk central banks, global bond yields have sunk to an unprecedented average of below-1%, objectively confirmed by Barclays Global Aggregate Bond Index.

Even more embarrassing, however, is the sad fact that the amount of bonds with yields below zero (and thus technically defaulting) have drunkenly climbed above $18 trillion, which empirically proves that markets and investors (if you still wish to call them that) are clinically insane to seek return within such a quantifiably obvious asset bubble.

Because bond buyers, as the great songwriter, Mark Knopfler, once said, “get their money for nothing” but then nothing for their money.

That is, global bonds yield next to zilch, which means investors are going further and further out on the risk branch on a drunken quest for yield in a credit market that otherwise has no yield, save for the junkiest and riskiest of bond peddlers. 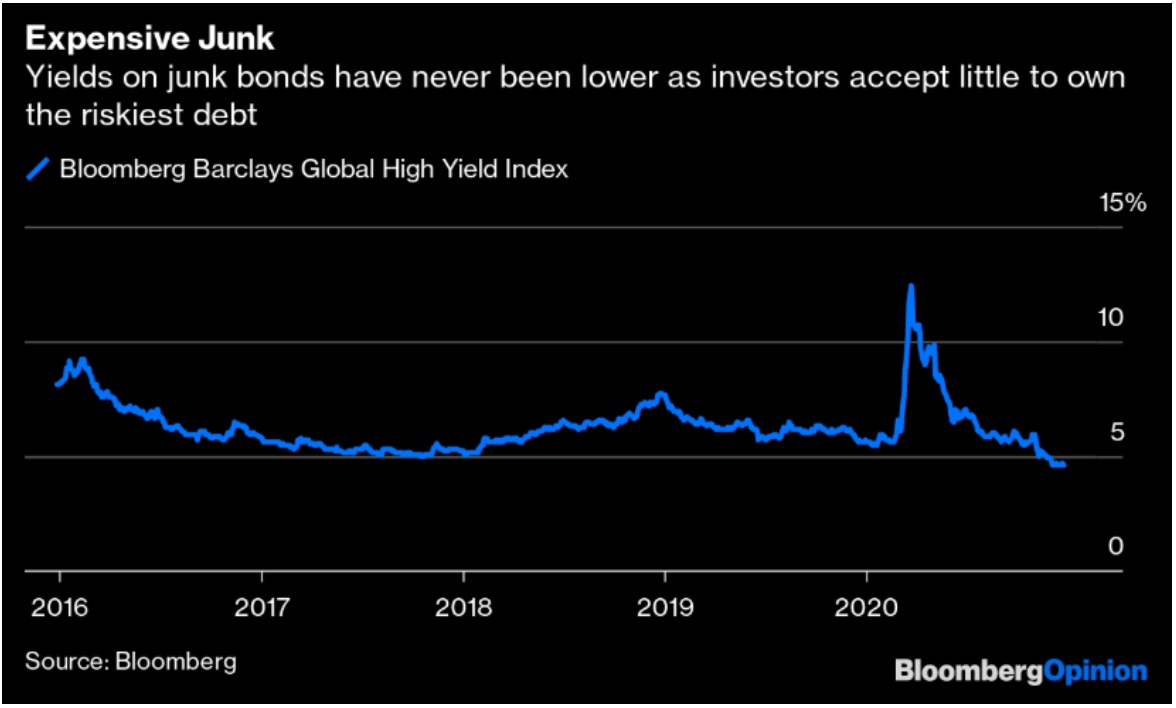 But hey, if you’re into asymmetric risk/reward gambles and a shot at 4.5% yield, you can always buy IOU’s from Belarus or Ghana…

From Bad Bonds to Inflated Stocks and Diluted Currencies
Of course, those investors weary of yield-less bonds don’t seem to be weary of paying 31X earnings in an equally bloated global stock market as per the latest PE ratios on the MSCI All-Country World Index.

In short, bond investors are running from a credit frying pan into an equity fire. 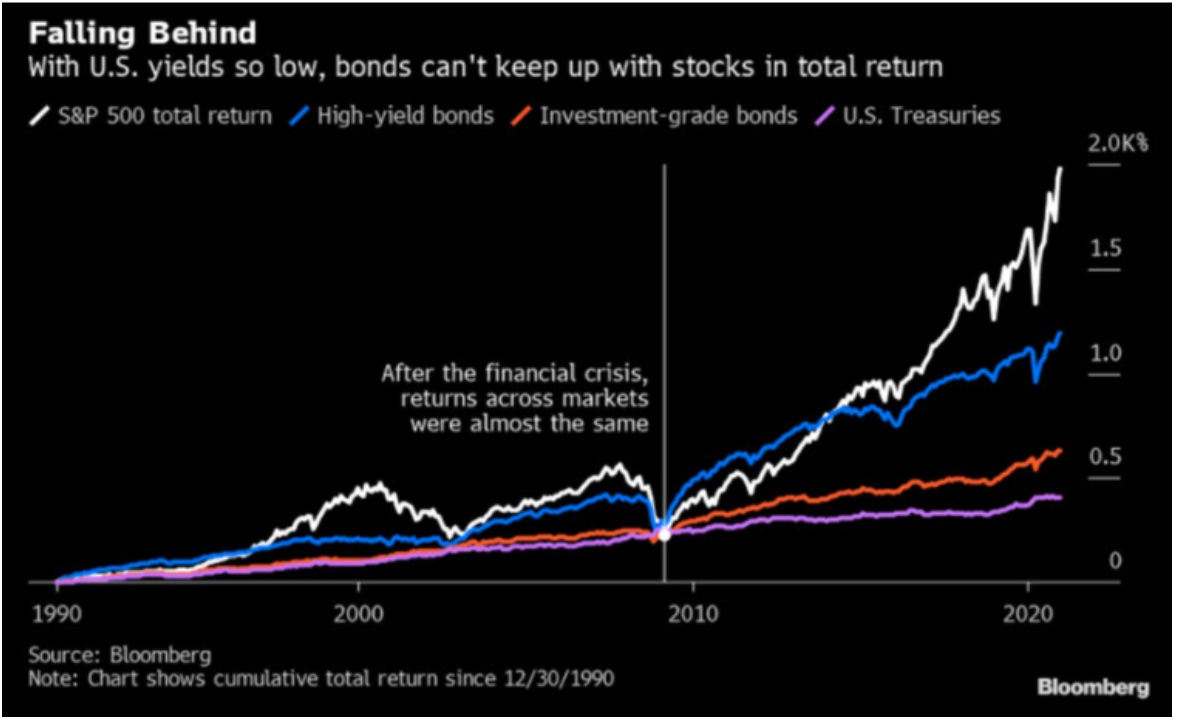 Needless to say, the sell-side on Wall Street is ignoring over-valuation facts and pumping out the “it’s all gonna be fine” propaganda.

The fee gatherers are promising extremely optimistic earnings revisions for 2021 with shameless confidence—mostly driven by vaccine headlines promising a return to normal which was never normal even pre-COVID. 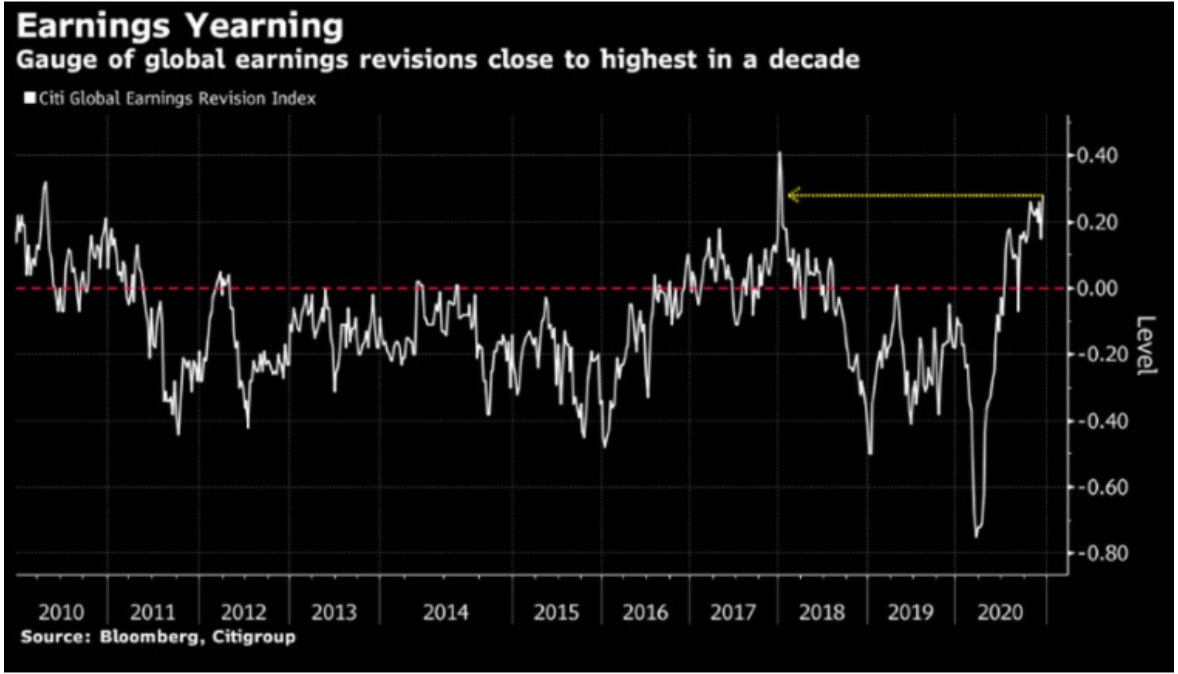 But folks, look a little bit closer at those optimistic “revisions.”

The caveat I would add, as well displayed in the above graph, is that the last time Wall Street made such optimistic projections in January of 2018, what followed was a tanking rather than surging of those same earnings revisions.

No Place to Hide?
Which brings us to the primal issue: Where is a safe place to hide when these risk asset bubbles suffer their inevitable “popping” and the hangover which always follows?

Needless to say, the answer doesn’t lie in the global currency market.

Pick your currency—or pick your poison—for whether you hold dollars, Yen, Euros or Pesos, they are losing purchasing power by the second, which means you’re losing money by the second, regardless of the latest (siren-call) rallies making the headlines.

As central banks binge drink on fiat currencies to “accommodate” risk assets (and Wall Street lobbyists), the inevitable dilution affect of too much paper money is no surprise to either history or far-sighted gold owners.

Again, and pardon the needed repetition, but the following chart not only says it all, but needs to be said all the time.

As currencies die, gold rises as a store of value to the tune of greater than 80% since 2000. 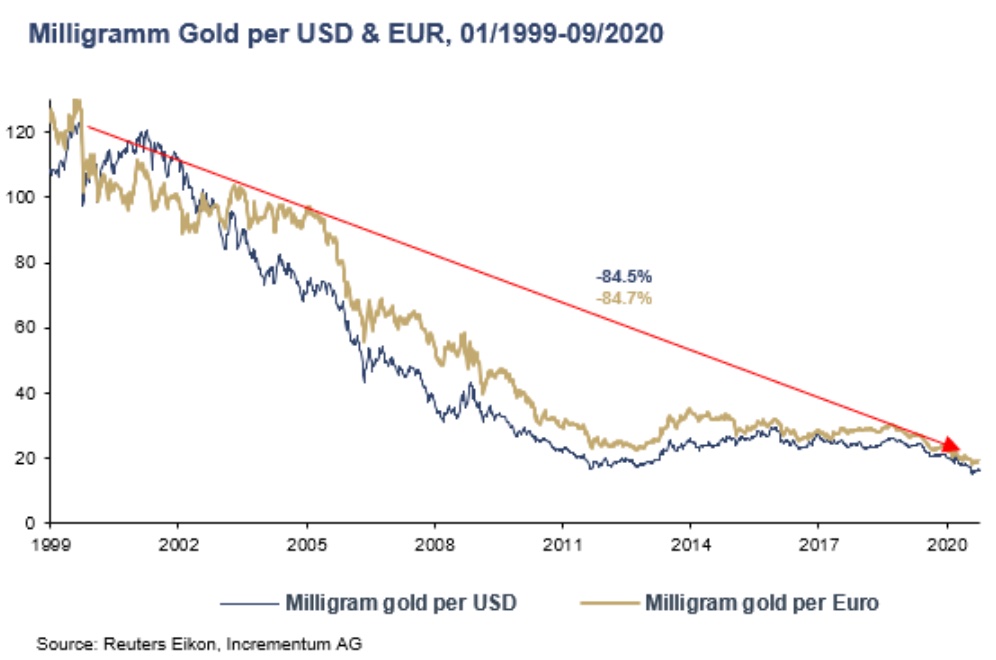 All Talk (and History) Turns to Gold
As I’ve also written countless times, and bears repeating again, all market distortions, as well as conversations, ultimately turn toward precious metals.

Gold, can’t be hacked, replicated or humbled by electricity shortages or the super computers (and super dangers) of clever “dark corners” from Russia to China.

Physical gold serves as a far more sober component and solution than cryptos alone for the next disaster in the current regime of doomed foreign-exchange floors.

There’s also no denying that cycles move through time, and just as the industrial revolution replaced the agricultural revolution, the new era and cycle of tech is here, and that includes cryptos and blockchain.

The recent mania in Bitcoin, alas, is no joke, and like gold, represents a common distrust (and middle finger) to global central banks and their increasingly comical fiat currencies.

Cryptos and blockchain are thus an inevitable part of the present and future era, and that future will be volatile yet rewarding for those seeking to get rich, which is certainly the case today for Bitcoin holders.

But for those looking to stay rich, the very volatility and skyrocketing nature of cryptos like Bitcoin are, in and of themselves, dispositive evidence that such coded 0’s and 1’s will not, by themselves, be a source of real monetary stability in the next currency reset already being telegraphed by the IMF.

In other words, gold, that “barbarous relic of the past” will once again rise to the occasion as part of the future solution.

Past is Prologue
Stated otherwise, and with regards to gold, the past is prologue rather than just barbaric…

Love em or hate em, cryptos alone are not the real money answer to a global currency disaster now playing out in real time.

Your central bank will not be replacing one fiat currency today for tomorrow’s fiat crypto.

Nor will Bitcoin find itself on the Fed’s balance sheet or pinch-hitting for the IMF’s failing SDR’s.

Whatever blockchain technology or “global bank crypto” the cornered bankers of the next reset or “Bretton Woods II” ultimately decide upon will require a backing in something from that “barbarous” past as well as our crypto future, and that “backing” will and must involve gold.

Anything less would be tantamount to the very definition of insanity—namely, repeating the same behavior yet expecting a different result.

That is, solving one global debt crisis (and $280T is a crisis) driven by gold-less fiat currencies by merely adding more global debt paid for by a new yet equally gold-less blockchain “alternative” is a distinction without a difference and thus an open-faced charade.

Alas, change is coming, technology is coming, blockchain and cryptos are coming. But as a new global currency, they will be useless unless gold is a part of their valuation and backing.

In short, crypto technology is new and, on the march, but gold, like always, was already here and just beginning to make yet another currency rescue, and yet another, calm “I told you so” to a global economy once again ruined by fake money, be it printed or software generated.

Shocking Truth About What Is Happening Around The World 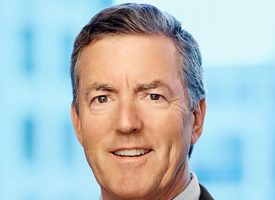