The global economy is deteriorating at a frightening pace.

The Situation Is Deteriorating
June 28 (King World News) – Peter Boockvar:  Commodity prices are getting a lift after the news that China was shrinking the required quarantine schedule for inbound travelers to 10 days from three weeks. Copper is rebounding by 1.3%, iron ore by 3.3% after yesterday’s 5% bounce and brent is up by 2.3%. Travel and leisure stocks there too are rising. Commodity currencies like CAD and the Aussie$ are higher as well. We’ll see if this is a first sign of a more rational approach to covid. The world can use an unclogged Chinese supply chain and it could certainly use the Chinese consumer again. To the last point, Nike said “In Q4, revenue declined 20% on a currency neutral basis and EBIT declined 55% on a reported basis” in Greater China. Nike by the way has been in China for 40 years.

Also of note from the Nike conference call, “We expect to benefit from mid single-digit pricing actions and continued gains from our shift to a more direct business, offset by another 100 bps headwind from elevated ocean freight costs, increased product costs, discrete supply chain investments and normalization of historically low markdown rates. We expect FX to be a 30 bps headwind on gross margin due to strength in the US dollar.”

Here is what they said on transportation, “we continue to see transit times be elevated relative to pre-pandemic levels. It’s about two weeks longer than where we were. This is specifically in North America…And that’s obviously having a big impact on our in-transit inventory and the flow of goods into the marketplace. Right at the end of the quarter, we did start to see a little bit of improvement vis-a-vis the boat backlog at the West Coast ports. But at this point in time, given all the variables that we see there, we’re not planning for a significant improvement in transit times in fiscal ’23.”

Moving away from the Nike call but looking at container shipping rates, as of June 23rd, the World Container Index price for a 40 ft box from Shanghai to LA has fallen to $7,952 and that’s the lowest in a year, though still is 444% above where it was entering 2020. We’ll soon see what happens to rates as China hopefully more fully reopens. 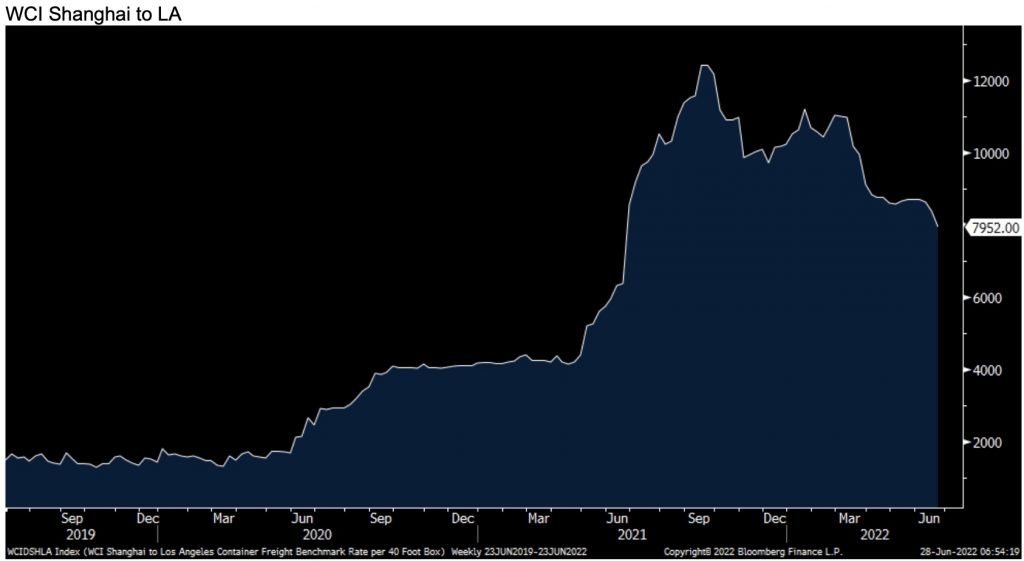 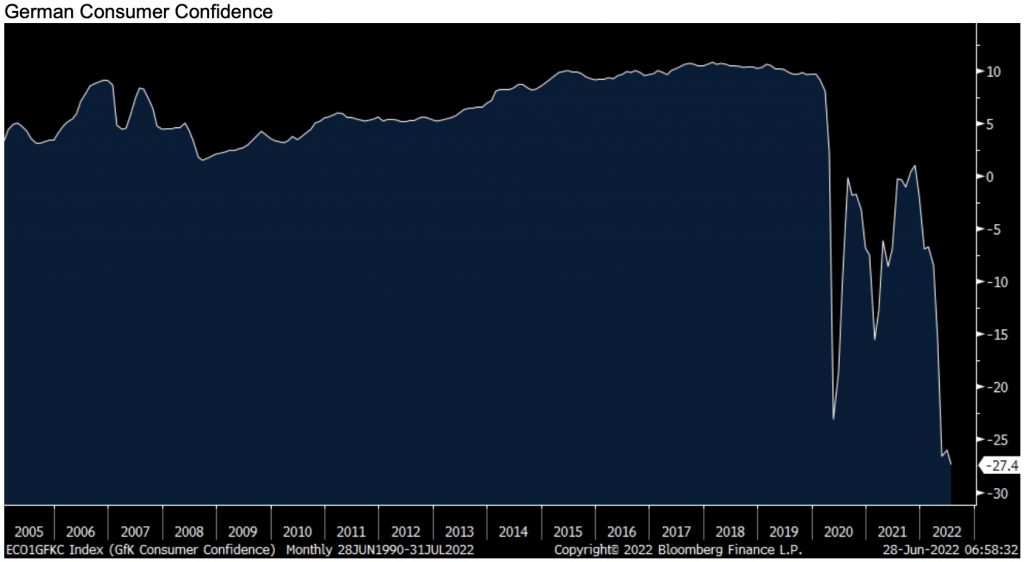 That’s a new record low dating back to 1991 and GFK said:

“The ongoing war in Ukraine and disruptions in supply chains are causing energy and food prices in particular to skyrocket, resulting in a gloomier consumer climate than ever before. Above all, the increase in the cost of living, which is almost 8% at present, is weighing heavily on consumer sentiment and sending it into a downward spiral.”

In France, consumer confidence dropped by 3 pts m/o/m to a less than expected 82, the lowest since 2013. 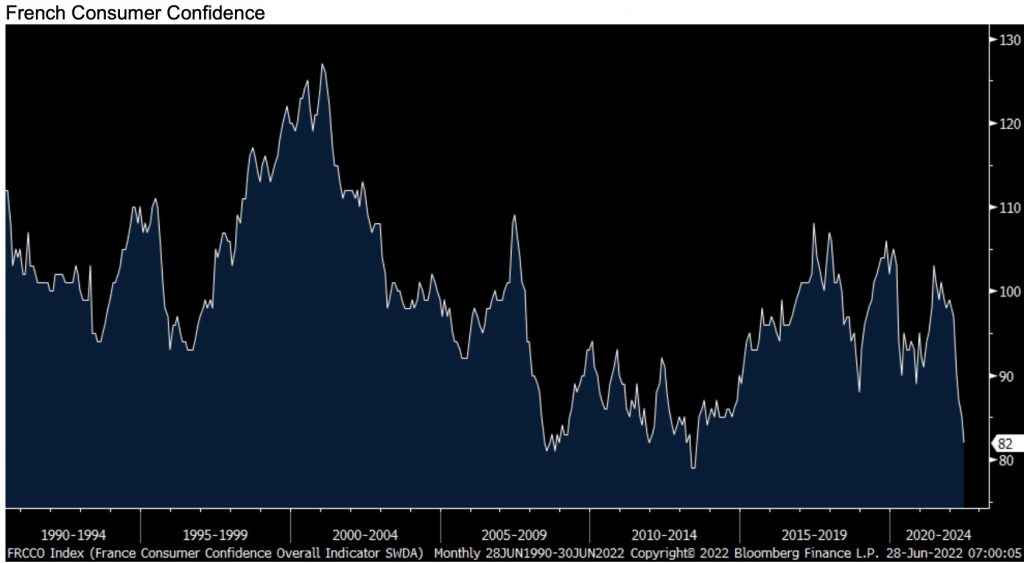 Ahead of the Conference Board’s US confidence index today at 10am est and after Friday’s UoM index, the US consumer can certainly relate.

Good Luck With That
ECB president Lagarde speaking in Sintra today said they will hike 25 bps in July as expected but left it open to go by 50 bps increments thereafter if needed. European bonds are selling off across the board. On the anti-fragmentation situation, what the ECB will do is reinvest maturing bonds into those country bonds, such as Italy, that deviate in yield from Germany. It is not clear though what the yield trigger would be. That will begin on Friday. So, the ECB will be tightening monetary policy for Germany at the same time conducting pseudo yield curve control for Italy. Good luck with that…

Real Estate
Somewhat dated but still reflecting the robust price gains seen over the past year (on top of the sharp increase in the year before) which now combined with the spike in mortgage rates is leading to a slowdown in the pace of transactions, the S&P CoreLogic Home Price Index for April rose 20.4% y/o/y. This is not a meme stock, nor a highflying software stock, or even a commodity future, we are talking about homes that are one’s most expensive thing to buy (for many). 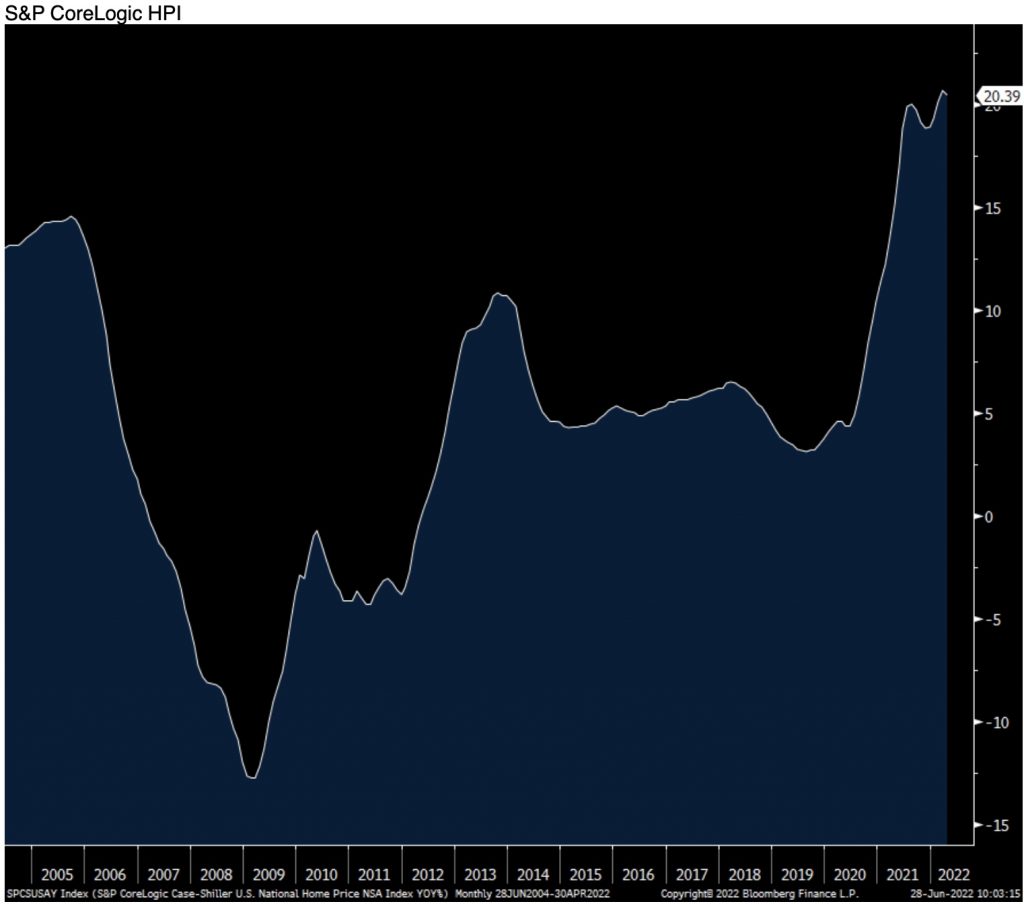 Tampa, Miami, Phoenix and Dallas led the increases not surprisingly with 30%+ y/o/y gains while Minneapolis, DC, Chicago and NY saw the slowest rates of increases in the low to mid teens, also not surprising.

The only question from here with housing is to what extent do the price increases slow and whether even in some markets do they actually decline. I say yes in some markets.

As Highlighted Earlier, The Situation Is Deteriorating
Over the past few weeks we’ve seen the June NY, Philly and Dallas manufacturing indices all print below zero, aka, contraction. KC fell but still had a plus sign. Today, the Richmond Fed said their June manufacturing index dropped 10 pts m/o/m to -19. The estimate was -7. This is the worst read since May 2020. Order backlogs dipped as did vendor lead times. Prices paid fell but those received rose.

Production and new orders fell further below zero but employment surprisingly jumped to 23 from 8 and wages remained high, though ticking slightly lower. 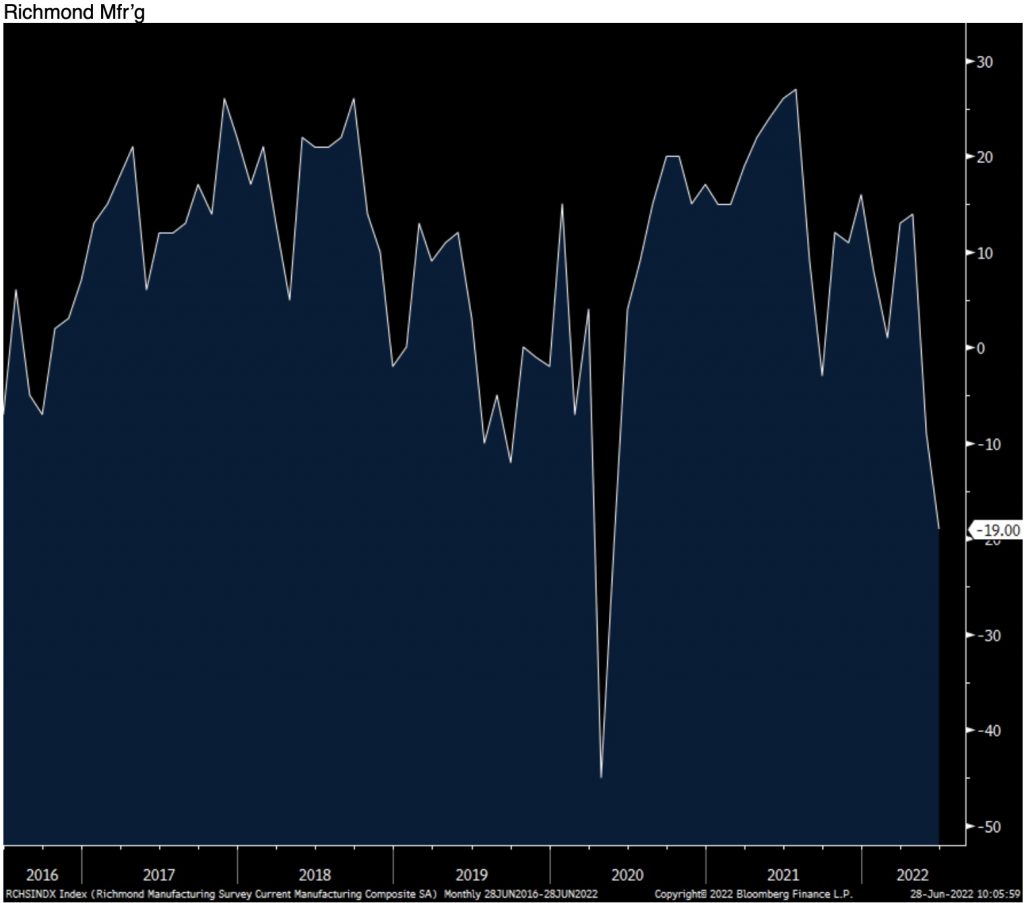 Bottom line, we’re now 3 for 4 with regional manufacturing indices that are now in contraction. Chicago reports on Thursday and the national ISM on Friday. The estimate for ISM is 54.5 and there is now certainly risk to the downside.

Following the record low June UoM consumer confidence index seen Friday, today the Conference Board’s measure fell to 98.7 from 103.2. That was just below the estimate of 100 and it is the lowest since February 2021. 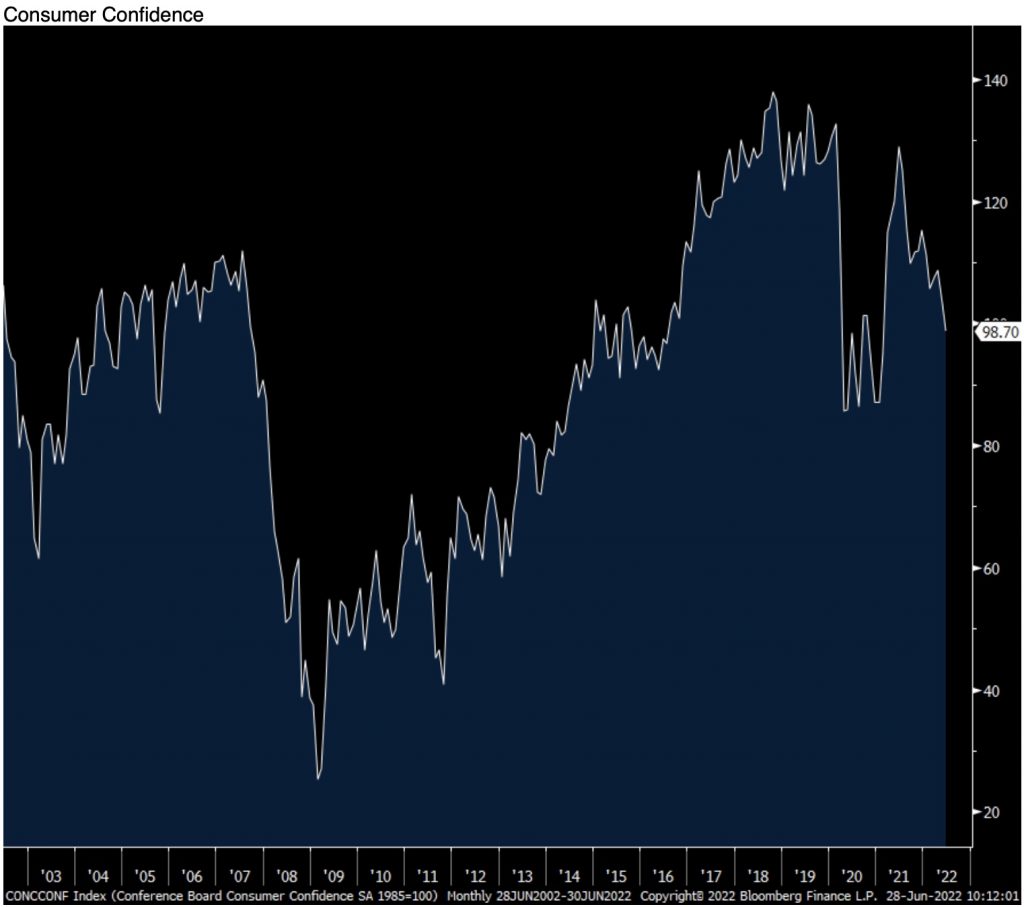 Almost all of the weakness was in the Expectations component which dropped to 66.4 from 73.7. That is the weakest since March 2013. 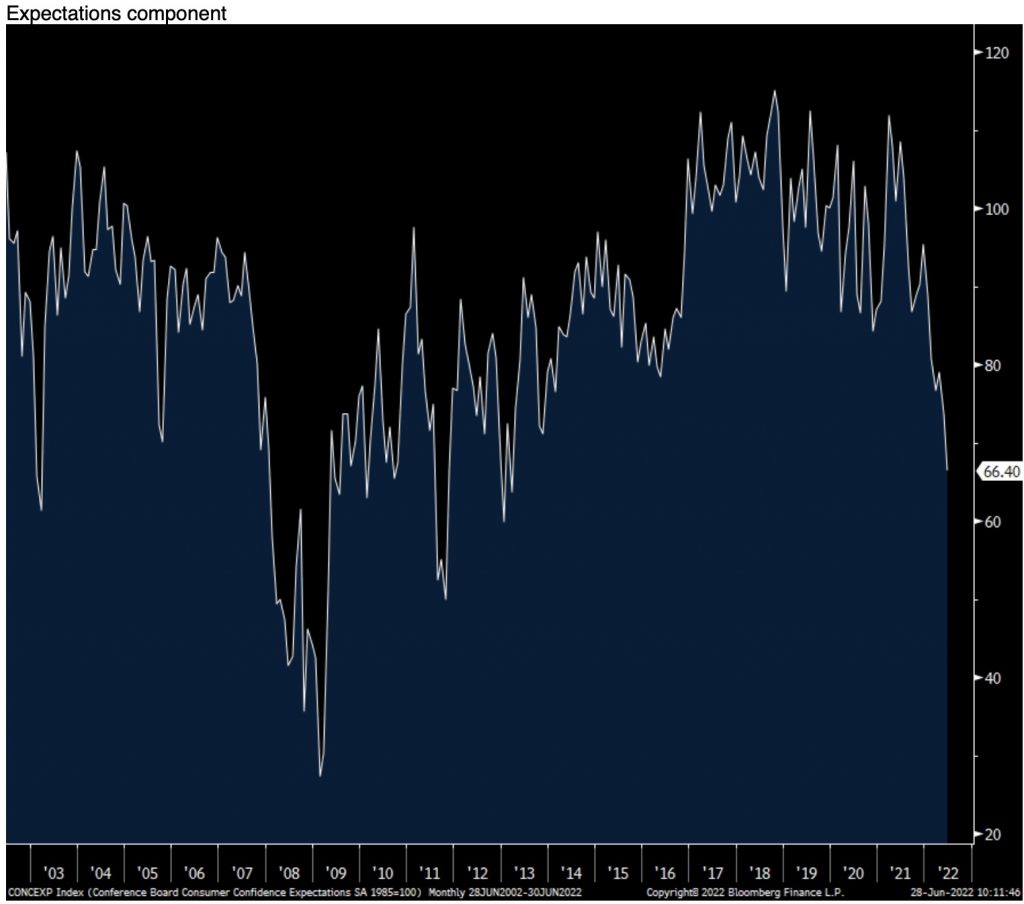 The reason why this confidence index is not close to being as weak as UoM is because of a heavier weight to a still good, but moderating labor market.

One yr inflation expectations rose to 8% from 7.5% and that is the highest on record dating back to 1987. 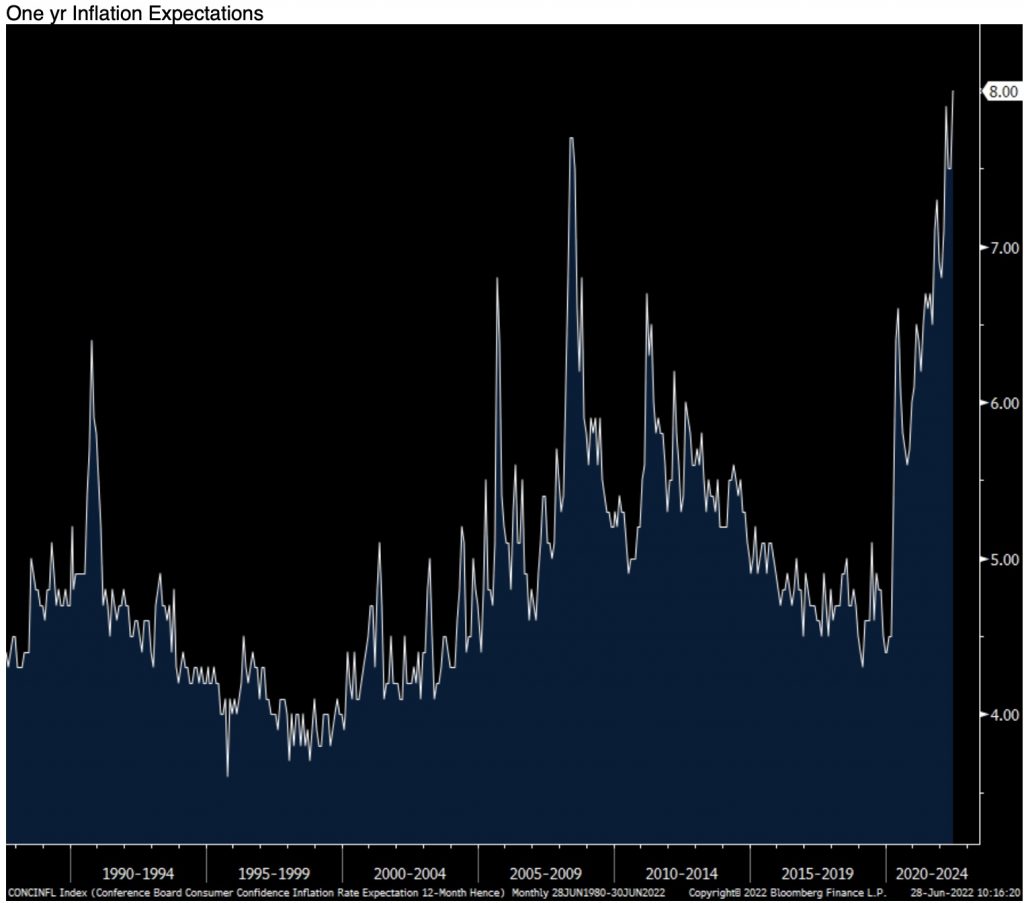 On those labor market questions, those that said jobs are Plentiful did tick down by .6 pts from May to the lowest since May 2021 but is still above its pre covid level. Those that said jobs were Hard to Get did fall by .8 pts after rising by 2.3 last month. This line item is below pre covid. On the expectations side, ‘more jobs’ fell 1.2 pts to the lowest in a few years and income expectations softened further.

With regards to spending intentions, they rose for auto’s and major appliances and didn’t change for homes. Those intending on taking a vacation within 6 months fell to the weakest since February 2021.

Lastly, on the age breakdown, confidence fell for those under the age of 35 and those over 55 but was unchanged for the 35-54 yr olds.

Bottom Line
The bottom line from the Conference Board is obvious now, “Consumers’ grimmer outlook was driven by increasing concerns about inflation, in particular rising gas and food prices…Looking ahead over the next six months, consumer spending and economic growth are likely to continue facing strong headwinds from further inflation and rate hikes.”