Today the man who first predicted Greek bank deposits would be stolen warned King World News about a coming financial shockwave and one of the most ominous graphs he has ever seen in his 50-year career.  He also spoke about a suprise in the silver market.

James Turk:  "Let’s start with Greece today, Eric. It is clear that the government there has run out of money, but the eurocrats are doing everything in their power to avoid the inevitable day of reckoning….

"Nearly all the Greek debt has been moved out of banks and other private lenders to the public sector, namely, the EU, ECB and IMF. It is just but one example of how public policy works these days.

The banks shovel their bad paper into the hands of institutions funded by taxpayers, so that taxpayers – rather than bank shareholders – take the loss. And with its €320 billion of debt, the losses in Greece are going to be huge. But Greece is only one part of a world overloaded with problems.

Japan is running full-speed in the debasement of its currency, which is sending alarm through other export oriented Asian countries. The 1997 Asian Contagion occurred as a ripple effect of the Chinese currency devaluation, so we can only wait and see whether this time Japan will set off a similar financial shockwave.

There are zillions of derivative bets out there that are losing money as bond and other long-term interest rates climb higher. We saw what happened in 2008 when banks were on the losing side of derivative bets back then, and it looks to me that another 2008 meltdown is very close at hand.

The common theme running through the above points is counterparty risk. The risks of default are without a doubt continuing to worsen, with the consequence that tangible assets are still the best place to be, Eric.

Silver – The Most Underpriced Asset In The World

In this regard, this long-term chart is showing a very clear picture of the great prospects for silver, which I think is the most underpriced asset in the world. 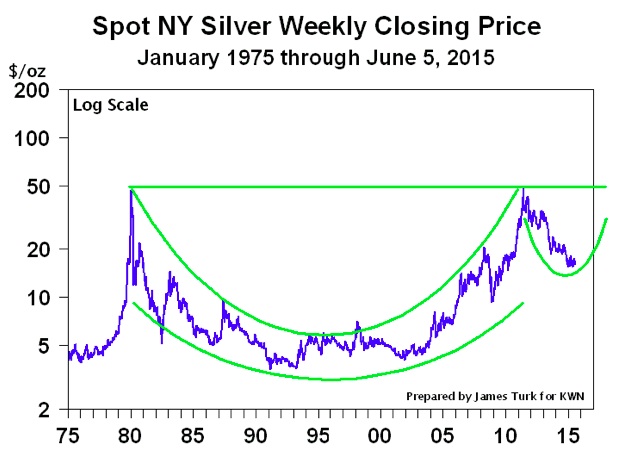 We’ve spoken about this chart before, Eric. And because it is a long-term chart spanning over a few decades, it can seem like nothing has changed. But with each passing week, this “cup and handle” pattern continues to develop.

This pattern being developed makes this chart without a doubt one of the most ominous charts I have ever seen in my 50-year career, and I have seen a lot.

Now of course a long-term chart like this one that spans four decades is not saying that silver has turned higher and the bull move has resumed. But it will do two things. It will help you identify an underpriced asset that is being accumulated by strong hands, and second, it will keep you on the right side of the market because this chart is shouting “higher prices are coming." ***KWN has now released the extraordinary audio interview with Andrew Maguire, where he discusses the gold and silver takedown, what surprises to expect next, how much physical gold tonnage has been taken out of the market and much more and you can listen to it by CLICKING HERE OR ON THE IMAGE BELOW.

***KWN has also now released the powerful audio interview with Stephen Leeb, where he discusses China's massive gold hoard, what surprises to expect next, and much more, and you can listen to it by CLICKING HERE OR ON THE IMAGE BELOW.

***ALSO JUST RELEASED: The Devastating Final Climax On The Road To Collapse And Major Shortages That Will Rock The Silver Market CLICK HERE.