It appears that the biggest danger to global markets may be set to unleash chaos.

Area Around 3% Still Holding In 10-Year
May 2 (King World News) – From Andrew Adams at Raymond James:  No real development in the closely watched 10-Year U.S. Treasury rate, which continues to hover right around that 3% level. We mentioned over the last week that the 3.00-3.05% zone could act as resistance and so far that seems to be happening. At the same time, it’s also not really forcing the yield back down too much, strengthening the case that it’s probably only a matter of time before that zone is broken.

3% Key Psychological & Technical Area In Danger Of Being Breached! 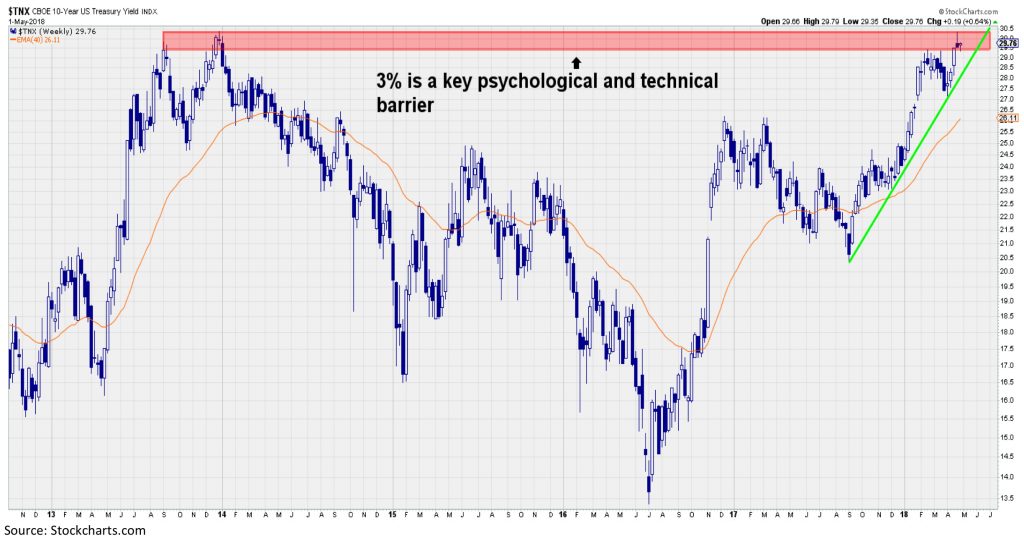 ALERT:
To see the symbol for the only gold explorer in the world with no debt and a massive treasury that has seen insiders buy more than 3 million shares in the open market
in the past few months CLICK HERE OR BELOW

King Dollar Reasserting Its Power
Andrew Adams continues:  The weakness of the U.S. dollar was one of the big talking points last year.  That weakness continued into 2018, but over the last few weeks we have witnessed a definite turn-around in the U.S. Dollar Index. The DXY is now at its highest point since around the beginning of the year and it looks to have broken the downtrend line that acted as resistance going back to the beginning of 2017. The 93 zone might give it some trouble, now, but the strength of the dollar is definitely something to watch if we have in fact seen a reversal from the year-plus downtrend (see chart below).

US Dollar Attempting A Rally

Big News!
Eric King:  “Your stock was halted because the results that you released were incredible.”

Matthew Hornor:  “Eric, the drill results that Maple Gold just now released are some of the greatest drill holes in the history of this entire project.  From today’s release:

The Next “Super Pit” Gold Project In Canada
Matthew Hornor continues:  We still have more than 9,000 assays at the lab that we are awaiting to receive results, and should have them within the next few weeks, but today’s results indicates that this particular zone widens, and may extend well beyond the currently defined zone, and with much higher grades. In addition to the 158 meters of 1.25 grams per tonne, we also had a 52 meter intercept at 3.53 grams per tonne and 21 meter of 7.87 grams. We are now extremely confident that this project will be the next “Super Pit” gold project in Canada.

Eric King:  “Matthew, this was your quote from today’s release:

“This interval appears to represent one of the 5th best intervals in the entire 760+ drill-hole database and the best intercept reported from the Porphyry Zone to-date.” Hornor added, “We are very pleased to receive such a positive result with only a fraction (~25%) of the assays received to-date, and one that indicates this particular zone widens and may extend beyond the currently-defined zone with higher grades.”

Matthew Hornor:  “As I mentioned earlier, we still have 9,000 assays at the lab and we we will be releasing results for the new few months.  This means there will be a great deal of news still to come in terms of drill results.

Eric, I know that you have purchased 1.5 million shares of Maple Gold and there are many other KWN readers that have also purchased shares.  We encourage all KWN readers around the world to go to maplegoldmines.com to review today’s drill results in detail as well as the photos that are contained in today’s release.  We would also encourage them to reach out to the company, they can call Joness Lang directly at (778)686-6836.” Maple Gold – Stock symbol MGM in Canada and MGMLF in the US.

***Also Just Released Look At What Is Skyrocketing And How It Will Impact The Gold Market CLICK HERE.