With gold recently showing strength, today King World News is pleased to share an extraordinary piece that warns the 4th major signal in the past 40 years indicates gold may have entered a new bull market.  This piece also includes two key illustrations that all KWN readers around the world must see.

October 18 (King World News) – Jason Goepfert at SentimenTrader:  “Gold has finally broken above its 200-day moving average for the first time in more than 100 days.  Many investors use that as a guide to identifying bull and bear markets.

King World News note: The chart below from Bloomberg shows the break above the 200-day moving average in the gold market.

SentimenTrader continues:  “But this is the third time in the past five years that gold has broken above its 200-day average after being below it for more than 100 days, and it has failed to hold above it.  It turns out that gold has had three breakouts in five years a few other times, and the third one coincided with multi-year bull markets in the metals (see chart below). 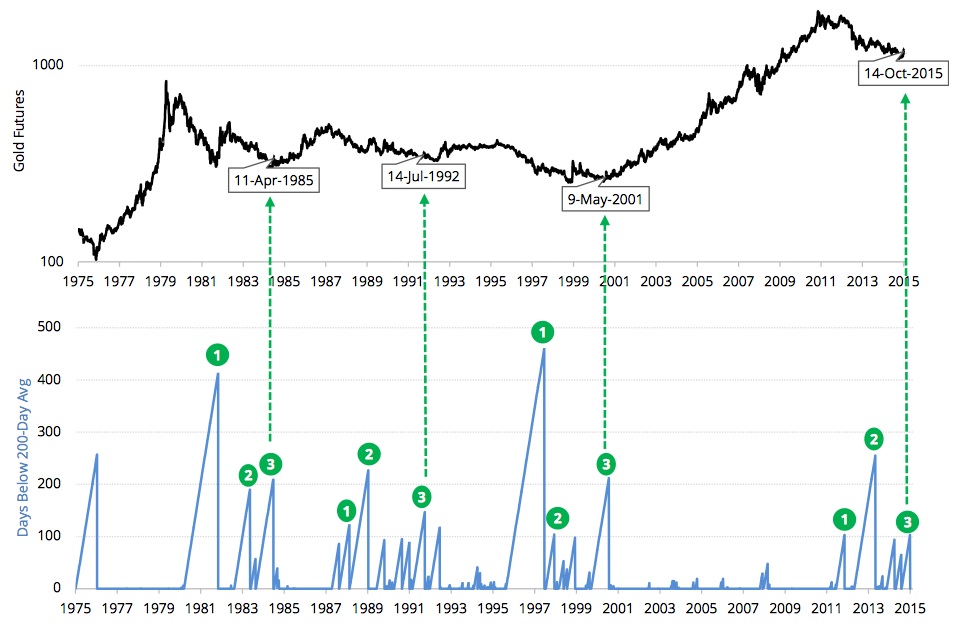 The third time it managed to break above its average coincided with sustained rallies during the next 1-3 years.  One caveat (besides the small sample size) is that there were a few times that is *just missed* the 100-day cutoff, which would have preceded the long-term bottoms by several months at least.” This is just a portion of one of the latest fantastic reports. To try a free 14-day trial of the internationally acclaimed work that Jason Goepfert produces at SentimenTrader simply CLICK HERE.

***KWN has now released the powerful audio interview with Bill Fleckenstein, where he says that gold and silver have entered new bull markets, and discusses the major markets and mining shares, and you can listen to it by CLICKING HERE OR ON THE IMAGE BELOW.

You Won’t Believe What Is Happening In The Gold Market, Plus Historic, Jaw-Dropping Moves That Will Take Your Breath Away