GOLD BREAKOUT! Gold Surges Over $80 In 3 Days And Silver Is On The Move As Well

The price of gold has surged over $80 in 3 trading days and silver is on the move as well.

Gold Has Now Clearly Broken Out On The Upside 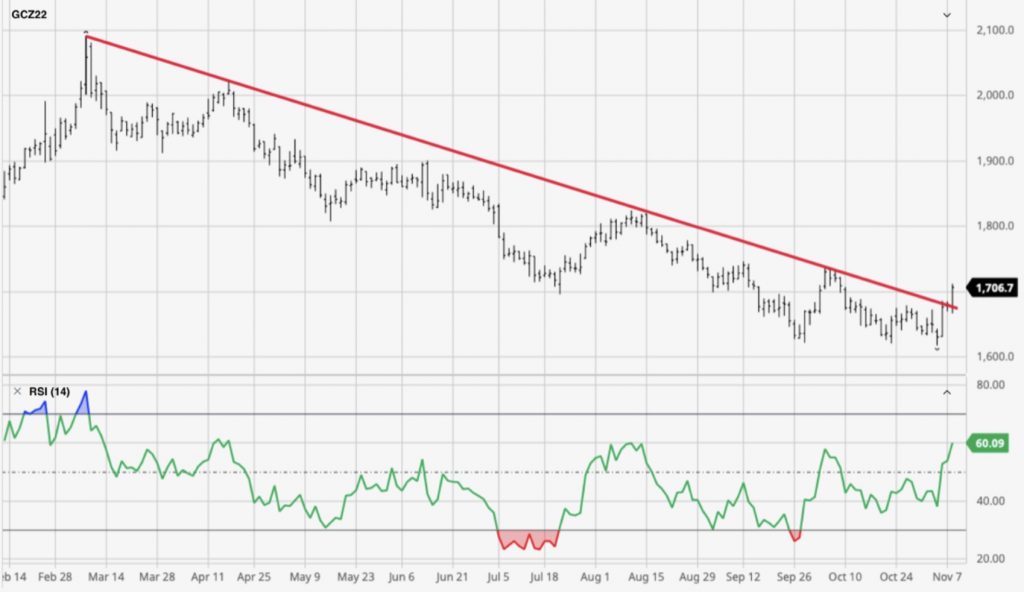 Silver is moving as well. Silver has actually been outperforming gold of late, which is something I like to see. Since silver’s low in the beginning of September, the gold/silver ratio has dropped from 97 to 80.

This outperformance by silver is often a precursor to precious metals bull markets. The US dollar price of silver typically rises faster than that of gold. It reflects silver’s much smaller market than gold’s, so when money moves into the precious metals, this buying power has a bigger impact on silver.

Other evidence is the various reports that both precious metals – but particularly silver – are experiencing heavy demand for physical products, whether coins or bars.

Investors are staying clear of paper products. Even activity on the Comex is subdued, as evidenced by the relatively low open interest for both precious metals.

The latest Consumer Price Index will be released on Thursday, November 10. It promises to show continuing high inflation, which explains the strong global demand for physical metal.

US dollar strength in recent months has kept gold and silver prices subdued in dollar terms, but pushed prices to new or near record highs in terms of other national currencies, demonstrating why people buy gold. It is a tangible asset with no counterparty risk that preserves purchasing power like it has done for 5000 years.

Kraken Energy Corp. announced that it has commenced drilling at its newly acquired Garfield Hills project in Nevada.  This is the first time the Company has drilled the project, which has a history of significant drill intercepts, including 14 metres (46 feet) at 0.26% U308 and 14 metres (46 feet) at 0.18% U308.  Phase I of the program includes up to 2000 metres of drilling, which the Company may expand if initial results prove positive.

Kraken CEO Matthew Schwab commented: “Drilling Garfield Hills is a critical next step towards establishing new uranium resources in the US as part of a broader hub and spoke mining model while demand for domestically sourced energy continues to increase.” Also in the Company’s uranium portfolio is the Apex mine, Nevada’s largest past-producing uranium mine, which Kraken’s management expects to begin drilling during the first half of 2023.

Kraken has assembled a world-class team of uranium experts, which now includes five former employees of the $2.77 billion NexGen Energy, having recently appointed a new Senior Geologist, to aggressively advance the portfolio of high potential uranium projects. Kraken Energy, symbol UUSA in Canada and UUSAF in the US.