Today a Swiss firm issued a major warning that yes, the current financial system is rigged, but it’s going to fail.

Rigged to Fail—From Musk to Powell
March 7 (King World News) – Matthew Piepenburg at Matterhorn Asset Management (based of Switzerland): For quite some time we have been warning about the rising shark fin of rising yields and rates.

As of this writing, one can almost hear John Williams’ orchestral theme song to Jaws ringing in our ears.

The Slow Creep
Mortgage rates in the U.S. have hit 3%, oil prices are now at levels not seen since 2018 (as broader commodities in general are on the rise) while the tech stocks of the NASDAQ (most of which thrive on cheap rates) are now predictably down nearly 10% from their February 12th peak.

Rates are up, the dollar is up and as Barron’s reporter, Janet H. Cho, observed: “Things are getting interesting.”

Unfortunately for Barron’s readers, however, these “interesting” developments have little if nothing to do with what she described as “economic growth picking up.”

Spinning the “economic growth” meme for rising yields is akin to attributing Lance Armstrong’s cycling success to an apple-a-day rather than a steroid per week.

What Barron’s feature article is conveniently overlooking is the far more obvious fact that investors, here and around the world, are calling the Fed’s bluff, not swooning over “economic growth.”

With over $8 trillion in combined household, government and corporate debt, investors are catching on that Uncle Sam’s credit score is tanking.

The recent $1.9T aid package is yet another staggering example of the U.S. borrowing and spending infinitely more than it earns, with a debt to GDP ratio well past the 100% Rubicon.

In sum, there are less and less buyers for U.S. Treasuries, which explains why yields on the 10-Year have topped 1.5%. 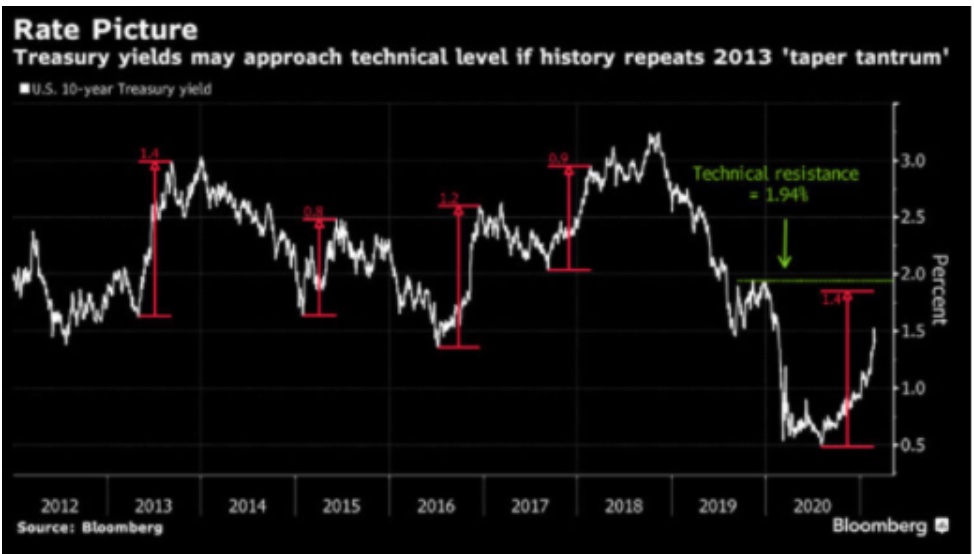 Thus, to call the foregoing scenario a backdrop to “economic growth” is a fairly open and obvious charade, almost shameful, but certainly shameless.

Shameless—The New Normal
But as investors and citizens, we are getting quite used to the shameless.

The staggering decline in basic ethics in the rigged-to-fail game of lax regulation and robust dishonesty that so characterizes the U.S. securities market is now the norm rather than exception.

Not long ago, for example, Robinhood’s CEO, after halting purchasing on his so-called “people’s app” due to a liquidity failure and unpayable $3B margin call, went on CNBC and openly lied to investors about the company’s healthy cash flow.

That same day, he walked from the T.V. studio to the regulator’s office and talked them down to $770M; and after confessing his financial sins to an equally ethically-challenged Elon Musk, the two infamous liars then promptly raised a cool $2.4B from investors to “fill the gap”—or “cover the lie.”

This, by the way, is an open example of securities fraud, but it passed from public view like an oar swirl.

Such blatant lies from the C-suite are nothing new. In fact, they are becoming the norm, as Elon’s infamous “funding secured” tweet of 2018 reminds.

At that time, poor little Elon was angry about growing (and well-deserved) Tesla shorts, and thus openly claimed to have funding for taking Tesla private, a pure lie which prevented further stock declines.

In a single dishonest Tweet, Musk effectively created his own mini short-squeeze against his Tesla “enemies” (i.e. free markets), and for this open case of fraud, received a pathetic $20M fine from the SEC, little more than a cost of doing business for the false idol otherwise known as Elon.

In fact, Mr. Musk’s ability to make markets (on everything from penny stocks to Bitcoin) with a simple tweet is the epitome of a predatory front-running scam now accepted as “normal” in our oh-so “interesting” market setting of “economic growth.”

Such arrogant, entitled and smug behavior from C-suite billionaires is nothing new (think Enron or WorldCom), but is certainly becoming more mainstream and common.

From Lies to Populism
As the 1% enjoys the spoils of such “interesting” behavior, the remaining 99% are feeling a “disturbance in the force” and are becoming understandably angry for reasons they can’t fully put their fingers on.

This kind anger from the worst levels of wealth disparity that America has ever known is a perfect (as well as historically typical) setting for social unrest, of which we’ve warned, predicted and written for years.

Of course, the vast majority of the 99% who feel (and are getting) screwed are not universally savvy as to the nuances of securities fraud, market manipulation or C-suite extravagance.

That is: They know something is wrong, but can’t fully pinpoint the cause.

Instead, they just get frustrated and furious, and even delirious.

Populism is a pell-mell thing, and evidences itself in the fracturing of society at every level—political, racial, sexual, social, financial and cultural—including a “cancel culture” wave that is washing away everything from Dr. Sues and Laura Ingles Wilder to Abe Lincoln.

Otherwise complex social, financial and political nuances are reduced to blunt “X vs. Y” polarizations, as we’ve recently seen in everything from red vs. blue, Antifa vs. QAnon, boomers vs. millennials, Wall Street vs. Main Street, rich vs. poor.

Populism, of course, is nothing new. The 1960’s and the Vietnam era, for example is an obvious reminder.

But the current brand, speed and range of social fracturing has the added accelerant (and danger) of social media and “the internet of things.”

This electronic landscape is the perfect setting for a thick fog of good information, mis-information, spin-information and crap information all pushing for the most clicks at the expense of that now elusive lighthouse otherwise known as objective truth.

But as for lies, spin and challenged ethics, it’s both natural and easy to point fingers toward false heroes in the C-Suite like Musk and his ilk. It’s easy to blame evil “short-sellers” or Wall Street demons.

Fortunately, however, not every CEO is a liar and not every hedge fund or short-seller is a demon.

Furthermore, the massive wealth disparity enjoyed by the beneficiaries of bubble-assets and the social unrest that always follows in their wake has a far more obvious “patient zero” and will come as no surprise to many of Otherwise, you.

The Fed: Rigged to Fail
The appallingly imbalanced access to cheap or free capital (as well as cheap or free loan extensions) which fully explain the current market bubble and hence wealth disparity is no surprise.

In a backdrop of week regulations and open lies masquerading as monetary policy, the buck literally stops (i.e. begins and ends) at the U.S. Fed, a veritable proxy for all major central banks.

These bastions of artificial rate repression and fiat money creation, as well as the seemingly immortal airbag they have placed under stocks and bonds, fully explains where and how the financial world got off track in a global economy now rotting beneath $280T in debt as markets hit new highs along with unemployment levels.

As 2020 opened, I published the book, Rigged to Fail, to reduce all the market fog to a simple signal—central banks in general and the Fed in particular. 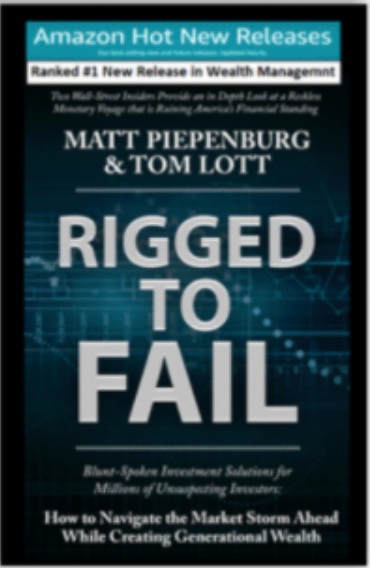 It takes chapters rather than paragraphs to unpack the myriad examples of central bank distortion, desperation and blatant dishonesty that began at the Fed and ended at where we are today: A market full-on addicted to central bank support that waddles and quacks like the obvious duck of Wall Street socialism.

As for just one of so many examples of Fed dishonesty, we can return to the rising rate environment alluded to in the opening paragraphs.

At $120B a month of money printing, Powell is not signaling higher levels of additional fiat dollars, at least for now.

Rates and yields can and will go higher if he keeps his word, which is admittedly quite difficult for anyone at the Fed since the great moral hazard otherwise known as Greenspan chaired the same.

But as we recently reported, the Fed may “allow” for higher rates and yields, and even higher “inflation” to address US debt burdens, but Powell will still openly lie about (i.e. downplay) CPI inflation by using an inflation scale that is as much of an open/rigged canard and manipulation as a typical Elon-Tweet.

By downplaying real CPI inflation, negative real (inflation-adjusted) yields won’t be accurately reported, for no other reason that inflation—at least for now—won’t be honestly measured.

This open inflation lie, compliments of the Fed, will continue to be a headwind for gold pricing, equally (and openly) manipulated by the Bank of International Settlements, central banks and the bullion banks they serve—just more examples of that rigged to fail system alluded to above.

But all rigged systems, including the current one, eventually fail under their own hubris and disfunction.

The central banks in general, and the Fed in particular, will be no exception, and inflation too will rise in the rubble of the undeniably distorted marketplace –and wealth disparity—which they alone created.

As always, the question is this: How prepared are YOU for an inflationary reality replacing a rigged system of central bank fantasy?…This will link you directly to more fantastic articles from Egon von Greyerz and Matt Piepenburg CLICK HERE. 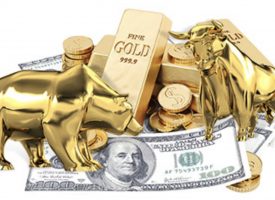