Gold Miners vs Gold
By Michael Oliver, MSA (Momentum Structural Analysis)
April 26 (King World News) – We use the XAU Index here as a measure of gold miners because it has lengthy data history.

Much is being made about a downturn in gold miner performance over the past nine months.   These long-term charts put that “downturn” into a larger context…

After a decade old underperformance trend with a momentum breakout being clear by early 2016 if not before, the miners surged from a low monthly spread close of 4.1% (price of XAU vs. price of gold) to a recovery high last year at 8.1%, nearly a doubling in performance (like buying a stock at $4 and it runs to $8). 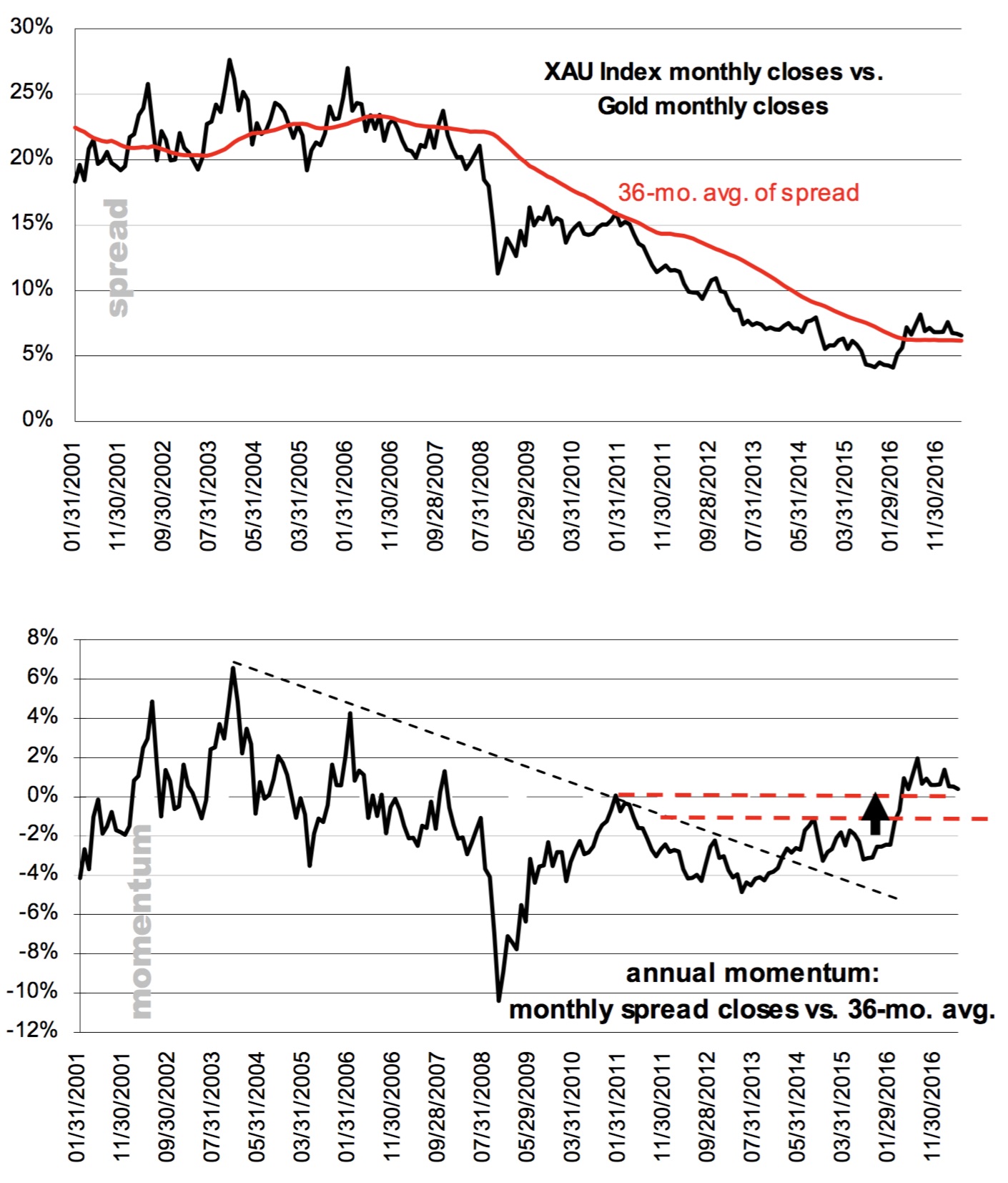 In the pullback since then readings have now reached 6.6%.  (For a sobering context, compare the recent decline in the spread or in its momentum to prior declines).

Furthermore, the spread remains above its 36-mo. avg. and above all of its breakout point(s) on momentum.   In other words it has experienced a several quarter pullback with no macro-trend damage rendered.

Let’s Get The Facts Straight
MSA does not interpret this minor pullback (a slow and un-panicked drift for these readings) as having any macro-trend implication for gold or for the spread.   In contrast, when gold peaked in price in late 2011, this spread had already been in collapse mode for several years.  Miner performance (the spread) was not a warning signal of the top in gold, because the downturn in miner performance was already several years old.  Hardly a timely “warning  indicator,” something that has been attributed to the recent minor downticks by many analysts.   An unjustifiable assertion from our vantage point.

This is not to say that gold miners cannot decline from here, or that gold cannot turn down (though as our recent reports argue, MSA cannot make such a case).   But this spread relationship and its recent minor pullback is hardly speaking loudly at the present time, and therefore should not be regarded as a negative trend indicator for precious metals.

Here Is The Reality Of The Situation
If the performance of miners has said anything in the past few years, it has said that it is tired of its lengthy underperformance to bullion and that action last year put it on the positive side of the ledger for future performance.  If the spread were to close out a month credibly below the 36-mo. avg./zero line (first line of major support, noted via upper red line on momentum), then we might consider altering our view on miners’ performance going forward.   That 36-mo. average is just above 6%.