Stocks and gold are rallying on the heels of the Fed hiking interest rates but look at these two stunning charts.

Powell’s “Whatever It Takes” Moment
July 27 (King World News) – Peter Boockvar:  If inflation was not at 9% currently the Federal Reserve would be cutting interest rates today in order to cushion the economic slowdown that is now upon us. … Powell will make clear in today’s press conference that he’s having his own ‘whatever it takes’ moment with regards to inflation, an economic recession notwithstanding and he’s still walking around with an inflation hammer. He’s not going to reflect weak knees just yet.

Now with respect to this whole debate on whether tomorrow’s GDP will mark a recession or not, it’s all semantics. Growth will have contracted in the first half of 2022 and is slowing further in Q3. To highlight the carryover of economic weakness from Q2 into Q3, here is what home builder Taylor Morrison said today in their earnings release:

“The rapid deterioration in affordability and consumer confidence cooled homebuying demand as shoppers faced significant uncertainty, related as much to the sheer speed of change to the shock of higher costs. These headwinds became most pronounced in the latter weeks of the quarter and have continued thus far in July. The impact has been felt across our wide range of price points, geographies and consumer groups, albeit to varying degrees.” The bold is mine.

Will three quarters in a row of contracting GDP finally convince those who think a recession is not here that it is? Now let’s just say in response to continued weakness in the economic data in the coming months leads the Fed to end its rate hiking cycle in September. Great news but what are they going to do with their balance sheet that is ramping up in September to its max monthly contraction rate of $95b? Oh the monetary quandary that they are in.

For those who think inflationary pressures are just going to collapse in the midst of an economic downturn, Sherwin Williams said this in today’s earnings press release:

“We are responding aggressively to inflationary pressures by implementing a 10% price increase in the Americas Group effective September 6th, with significant additional pricing actions being taken in our other two operating segments.”

This is at the same time they are cutting its earnings guidance.

Keeping the pressure on the Reserve Bank of Australia to continue on with its rate hiking, but breathing a sigh of relief, CPI in Q2 was up 6.1% after rising by 5.1% in Q1. The trimmed mean y/o/y increase was 4.9%. The headline print was 2 tenths below expectations and the trimmed mean print was 2 tenths more but markets today are focused on the latter. The 2 yr yield fell 10 bps overnight and inflation breakevens are falling but the Aussie$ is higher as are most currencies against the US dollar today. The RBA currently has rates at 1.35%.

What A Collapse
German and French consumer confidence both fell again m/o/m. The German index fell to a fresh record low dating back to 1991. 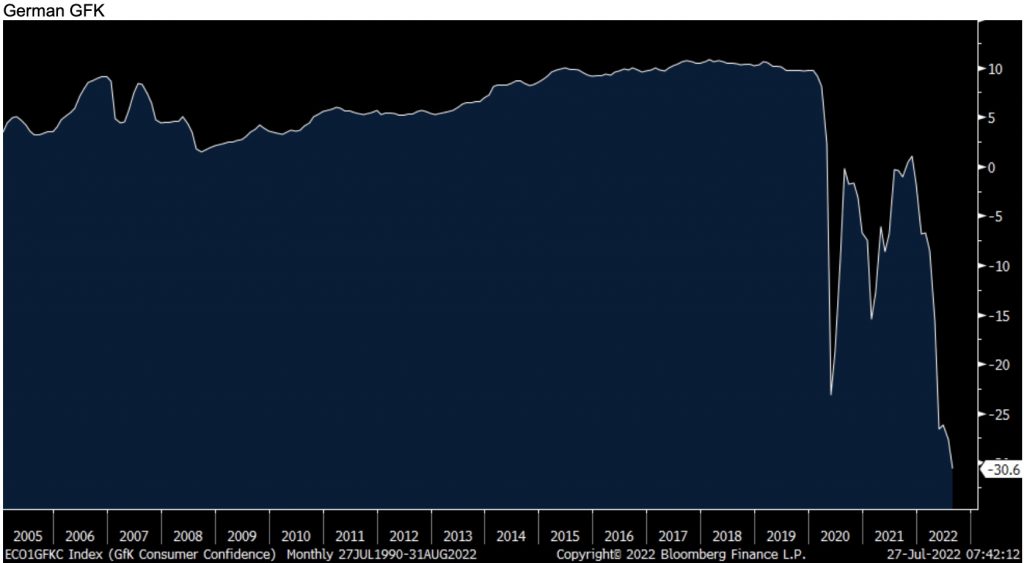 “In addition to concerns about disrupted supply chains, the war in Ukraine and soaring energy and food prices, there are now worries about sufficient gas supplies for businesses and households next winter. This is currently causing consumer sentiment to hit rock bottom. Especially as a tight supply of natural gas is likely to add to the pressure on energy prices and thus inflation.”

European markets are mixed with stocks rallying, bonds selling off and the euro bouncing.

Pending home sales in June plunged by 8.6% m/o/m, well worse than the estimate of down 1%. The index at 91 is the lowest since April 2020. A 40% two year increase in home prices and higher mortgage rates is the easy explanation. 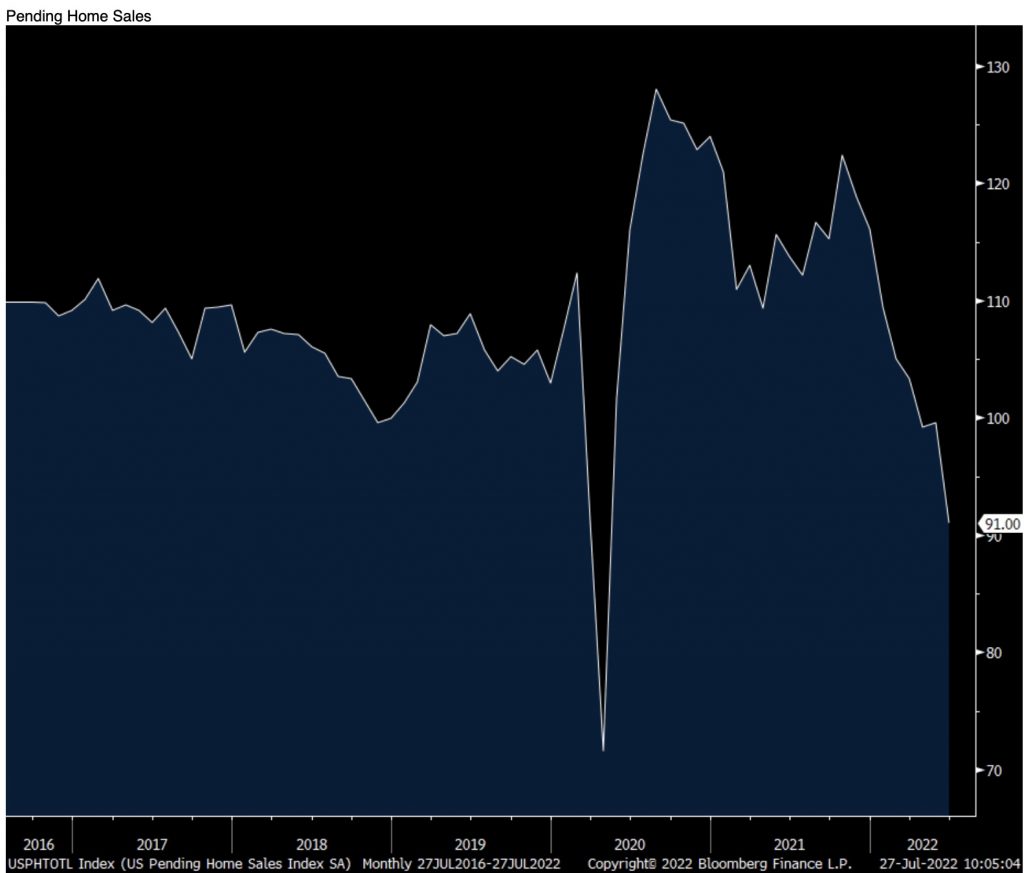 “Nearly a quarter of buyers who purchased a home three years ago would be unable to do so now because they no longer earn the qualifying income to buy a median priced home today.”

As we await the Fed today, keep in mind that into March 2022 they were still buying MBS.