As the world edges closer to the next crisis, today the man who has become legendary for his predictions on QE and historic moves in currencies, told King World News that tens of millions are already struggling to survive in the US, but this is the really scary part.

51 Million Households In Trouble
May 20 (King World News) – Egon von Greyerz:  “There are 51 million American households that cannot make ends meet. This means that 43% of American households can’t afford a basic middle class life. Of these, 35 million are dubbed ALICE which stands for Asset Limited, Income Constrained, Employed with a further 16 million households living in poverty…

Struggling To Survive
Egon von Greyerz continues:  “It is absolutely remarkable that in the world’s biggest and “richest” country, just under 50% of the households are struggling to afford a basic middle class life and that 50 million people live in poverty. And this is after decades of prosperity and economic growth. What this proves is that the average person in the US is seeing no prosperity at all. All the official figures of employment, production, growth, GDP, etc, are just humbug. They are fake data which is completely misleading and paints a totally false picture. The official unemployment figure is 4% but the real figure is 22%. There are 95 million Americans capable of working who are not in the labour force.

The US economy consists of a small minority which has benefitted dramatically from the credit expansion and money printing. And then there is the big majority that earn low incomes and have enormous debts who struggle to make interest payments on debts that they can never repay. Real median hourly wages have not increased in the US for 50 years! Today, 66% of Americans earn less than $20 per hour.

Trump was aware of the situation of the average American during the election campaign. And by appealing to this group, he won the election. But sadly, making promises is a lot easier than solving an insoluble debt problem. The US and global economies are soon going to be crushed by the massive global debt situation, as I outlined in my article last week about “Alice in Horrorland.” Since 1/3 of Americans have less than $5,000 in savings, they have nothing to fall back on when they lose their jobs and hit hard times. At that point, the government will default and there will be no social security net. They will of course print unlimited amounts of money, which will be totally worthless and thus have no effect except for causing hyperinflation.

It is not just the personal debt situation in the US that is cause for concern. Corporate debt is now at an extreme, in a similar position as before the 1990, 2000, 2008 economic crises and stock market collapses. As the graph below shows, corporate Debt to GDP is currently giving a warning that the next economic and market decline is imminent. The fact that US national debt has doubled since 2009 is certainly not going to make the situation easier. 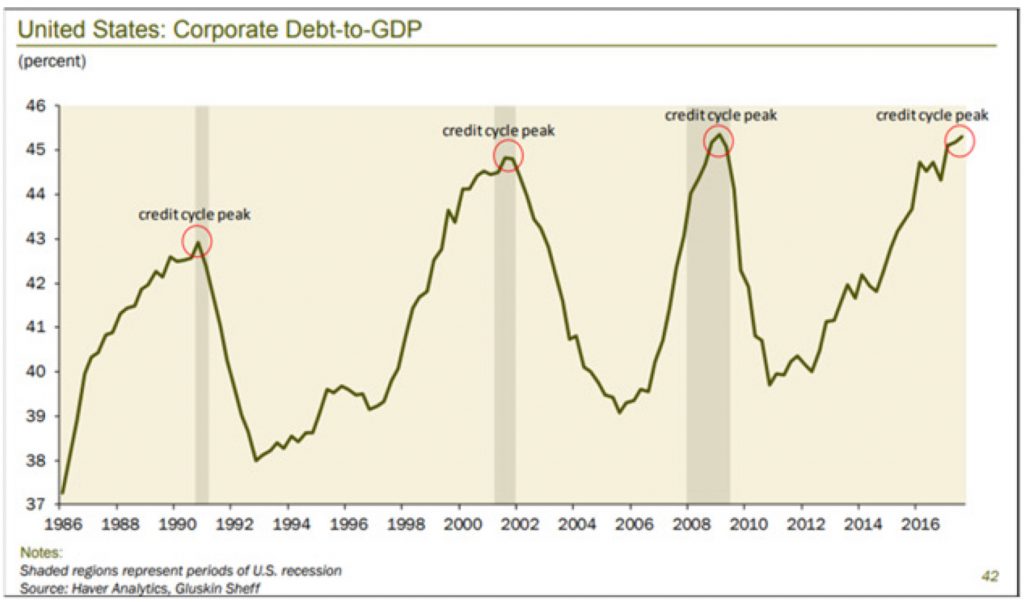 But these problems are not limited to the US. Almost 50% of the world’s population, which is more than 3 billion people, live on less than $2.50 per day. And 17% live in extreme poverty on less than $1.25 a day. The World Bank has defined the “International Poverty Line” as $1.90 a day and around 2.5 billion people are below that line.

So after over 100 years of major growth in GDP, technological innovations, industrialism, food production, health care, etc, there are still 2.5 billion below the poverty line. A major reason is the fact that world population has exploded in the last 175 years. In the 1850s, global population was 1 billion and today we are at 7.5 billion. A graph of a major sample, like world population, that is a spike straight up, will at some point turn into a spike straight down. This means that world population will come down dramatically due to poverty, disease, war or a combination of all three factors. Thus, a major decline in world population is likely in the next few decades to maybe half or 3 billion. This sounds dramatic and terrifying but similar reductions have happened throughout history. 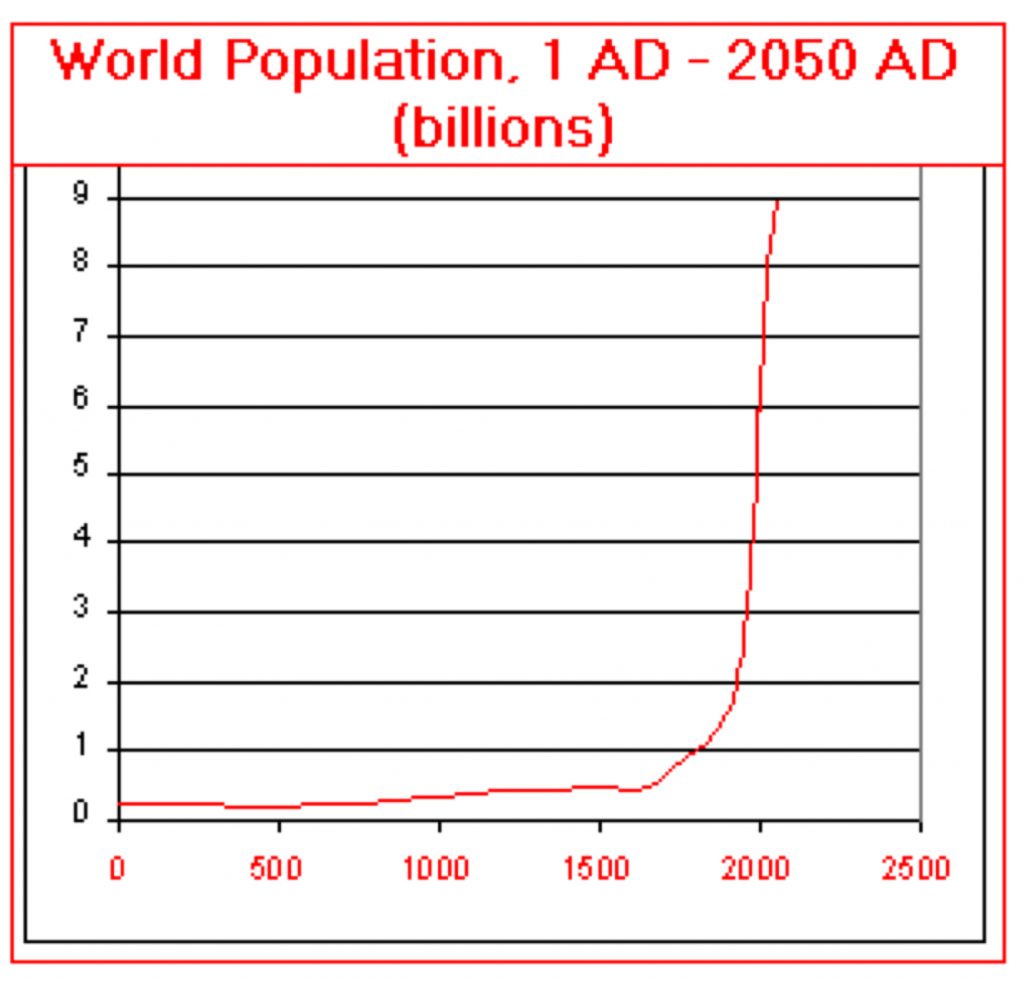 Thus, in spite of a century with remarkable growth, credit expansion and money printing, the world has a major economic and poverty problem. This will, sadly, not end well when the current global debt and asset bubbles burst. We will see a global contagion of, defaults and economic misery. Central banks will embark on unlimited money printing in a futile attempt to save the world but this time it will fail. Printed money has zero value and will therefore have no effect. You cannot solve a debt problem by issuing more debt.

The mess in Europe is getting worse. The US has broken the Iran agreement and is now putting massive pressure on Merkel and the rest of Europe to do likewise. But European countries are unwilling to comply. The US is threatening to sanction any country that trades with Iran and also with Russia.

The unelected and unaccountable bureaucrats in Brussels are under increasing pressure. They are doing all they can to stop Brexit. Theresa May has a very weak hand as the leader of a party that does not have majority in parliament. The problem is that she can’t even get agreement in her own cabinet. This makes her so weak that she is unlikely to reach the Brexit agreement that a majority of the British people voted for. The Brussels mafia is skillfully taking advantage of this and are currently succeeding in preventing the UK from getting anywhere. The European Union has become a failed attempt at constructing a European superstate run by the Brussels elite.

A free trade union was an excellent idea but the political union which is Brussel’s aim is a disaster waiting to happen. Also, a common currency can never work for a region in such a disparate area, with different cultures, wage rates, growth rates, inflation and limited mobility of labor. The elites’ dream of a common fiscal and economic policy will never be accepted by most member states.

Personally I am totally against the EU as a political union since I don’t believe in an unelected and irresponsible elite ruling over 500 million people who have very little in common. Instead, small is beautiful. The smaller a country, the more accountable politicians become. Even more so when power is decentralised to the regions and when there is direct democracy like in Switzerland. Even though Switzerland has its own problems, the political system is superior to any other country’s in the world. This is why the Swiss economy and currency has consistently been the strongest in the world.

But sadly, the Swiss banking system and the Swiss National Bank are as badly managed as most banks in the world. Also, the Swiss financial system is as vulnerable as the rest of the world and much too big for the country. Therefore, I would not keep any major asset in the Swiss banks, nor in any other banks for that matter.

The Brussel elite, together with Macron and Merkel, are now under increasing pressure to keep the EU together. Many Eastern European countries like Poland, Hungary and the Czech Republic are increasingly unhappy with EU policies and in particular the migration problem. 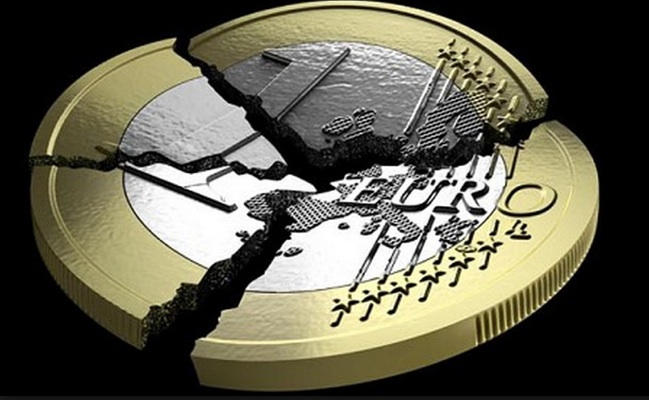 The weak Mediterranean economies should all leave the EU and the Euro, reestablish their own currencies and renege on the debt to the ECB. This is the only way for them to put their countries on a sound footing. The Brussels elite has used all methods to keep the Mediterranean countries in the EU by extending increasing amounts of loans that will never be repaid. Greece should have left the EU many years ago and so should Italy. The coming Italian coalition government will make life even more difficult for Brussels than the UK is doing.

The unholy alliance between the anti-establishment Five Star Movement and the far right, The League, won over 50% of the votes together in the election. They are anti EU, anti Euro and anti immigration. They want the ECB to wipe out EUR 250 billion of debt. Italy has EUR 2.4 billion of government debt and EUR 450 billion of Target 2 debt to the ECB.

The proposed Italian government has also promised to cut taxes and introduce a basic wage. Italy’s debt to GDP is already 130% and is unlikely to go down with these measures but reneging on EU debt would certainly help.

The elitist paper the Financial Times called the proposed Italian government “Modern Barbarians.” Salvini, the leader of the League retorted: “It is better to be a barbarian than a slave that sells Italy’s dignity, future, business and borders.”

It is very clear that we are now seeing the beginning of the end to the European Union. Brussels is not going to give up easily and it will take time. But economic pressures in many European countries, exacerbated by the very high number of migrants, will certainly contribute to a faster breakup of the EU.

Finally, let us look at a chart that predicts the future very clearly. Commodities are at 60 year low relative to equities. This doesn’t just mean that stocks will collapse. More importantly, many commodities will surge in price. Part of the reason for this is the coming inflation, leading to hyperinflation and a weak dollar. Commodities will be a major beneficiary of the coming repricing of assets. As bubble assets like stocks, bonds and property collapse, commodities will surge. This will lead to the biggest wealth transfer in history. 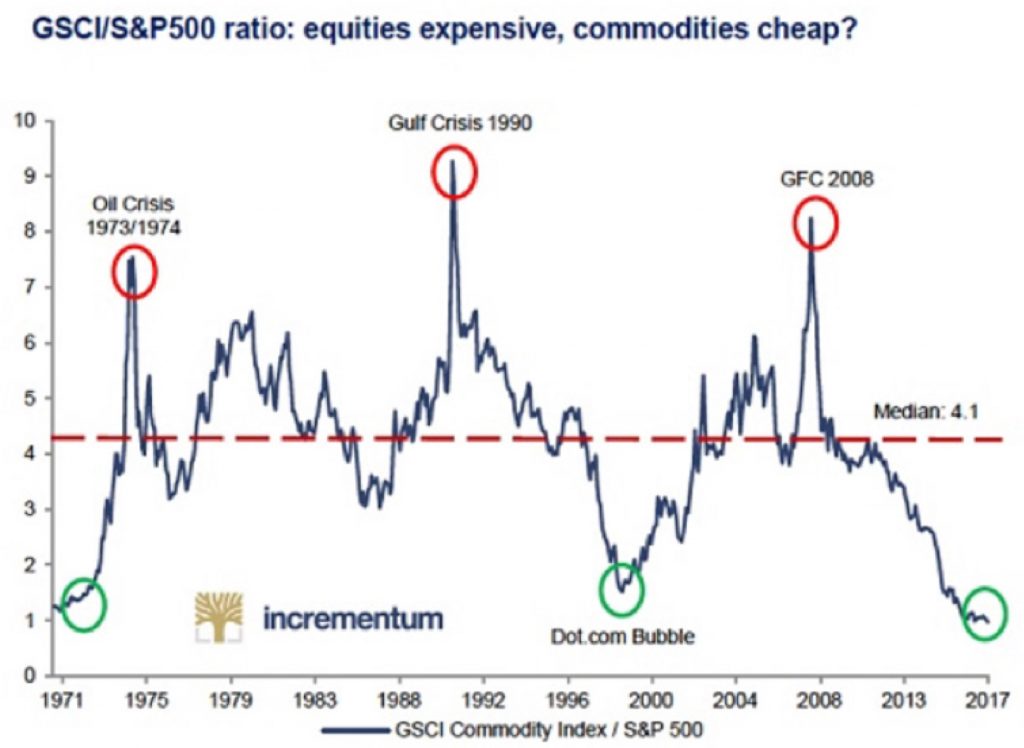 Many commodities will make new highs with oil, for example, very likely to go above $150 per barrel. But the main beneficiaries of the coming commodity boom will be the precious metals. Although I wouldn’t call gold and silver commodities, they are classified as such.

Precious metal investors have had to be patient for quite a few years since the 2011 top. For the people who hold physical gold and silver for wealth preservation purposes, the price is less relevant. But as the chart above warns us, the metals are now on the verge of a major breakout that will not only take gold above the $1,920 high and silver above $50, but to levels that will reflect the real inflation adjusted values of the metals, which is certainly at least $10,000 for gold and $650 for silver. With real hyperinflation we will have to add a few zeroes.

But we must remember that physical gold and silver is not held as investments but as the only money which has survived in history. We are now on the eve of an economic crisis of unfathomable proportions due to an insoluble debt problem. Holding precious metals will be invaluable insurance to survive this crisis financially.”