A staggering $1.5 trillion is needed to backstop oil and gas margin calls.

Vicious Stagflation To Continue
September 6 (King World News) – Otavio Costa:  A reminder: Despite the ~28% decline on Nasdaq, the index still trades at 37 times earnings. Thirty. Seven. This is insane when you think about it: Nasdaq is now down almost 30% from its peak and the Fed hasn’t even flinched. Instead, they are proceeding with $95B of QT (per month!) plus at least another rate hike. Welcome to a vicious stagflationary environment…

Gold
Otavio Costa:  The GLD ETF is now experiencing one of its lowest volumes in almost 7 years. Note that prior lows also marked key turning points for gold prices to rise. We are probably approaching another one of these pivotal moments. 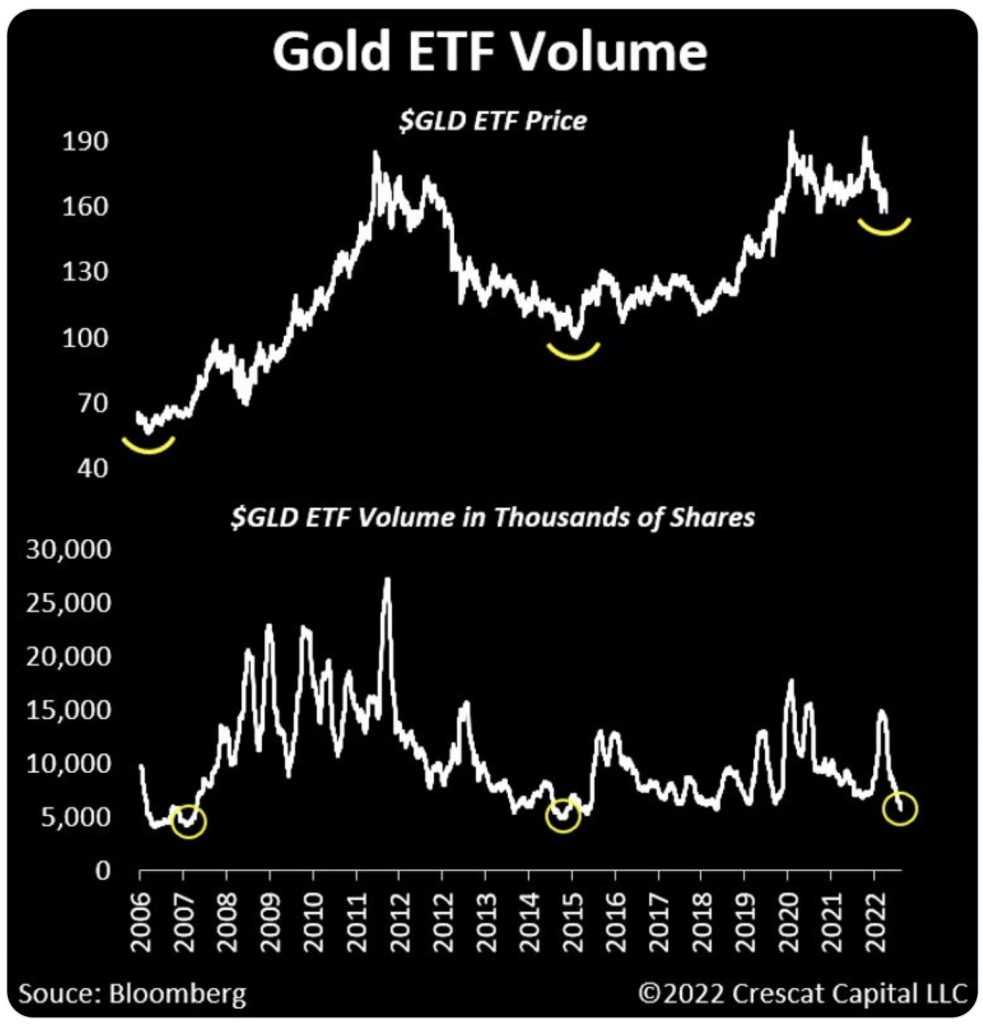 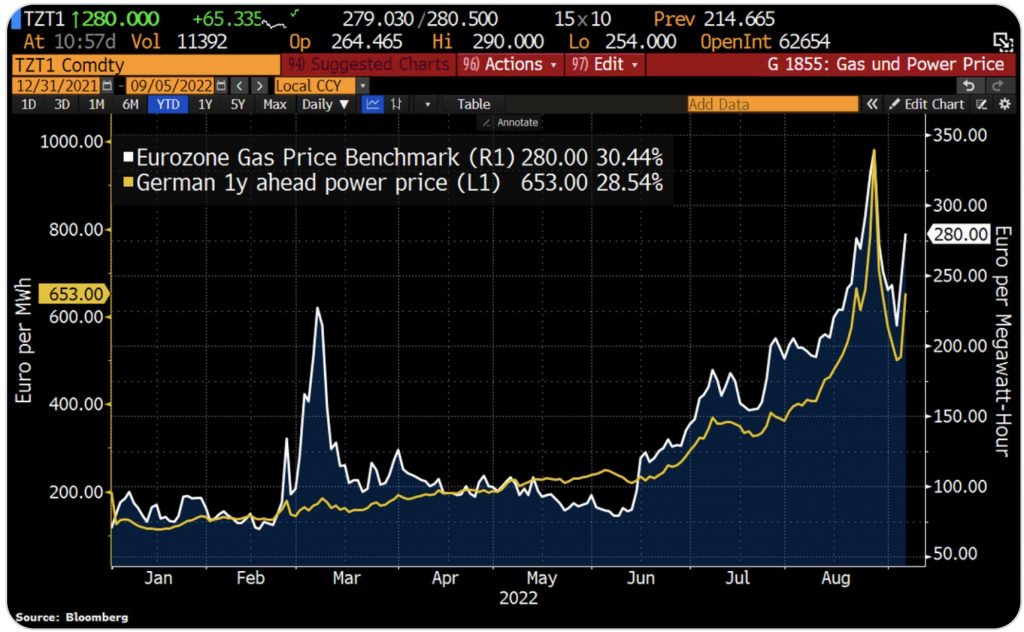 Russia Attempting To Force EU To Roll Back Sanctions
Holger Zschaepitz:  Russia switches off Europe’s main gas line until sanctions lifted. Gazprom previously said it was halting flows through Nord Stream 1 b/c of technical fault. Kremlin comments were most stark demand yet that EU roll back its sanctions in exchange for gas. 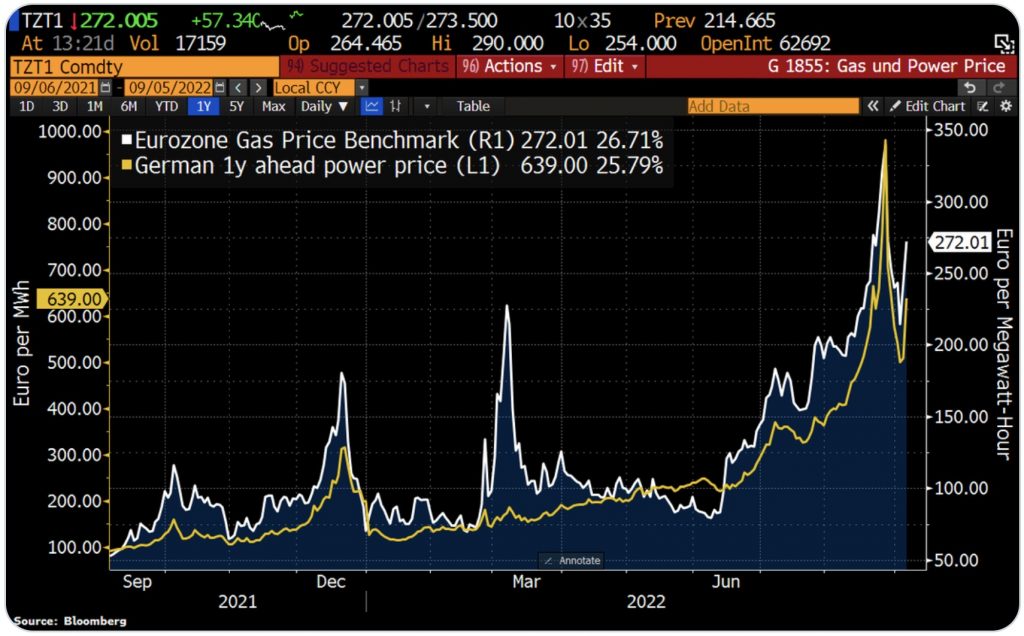 $1.5 Trillion Needed For Energy Margin Calls
Peter Boockvar:  I guess it could have been worse with the response in European natural gas to the Nordstream1 shutdown. Dutch TTF is up 4% over the past 2 days, giving back most of yesterday’s jump. After falling by almost 50% last week, after doubling in the two weeks prior, German power prices are up 7% over the past two days. The senior VP for gas and power at Equinor, the large Norwegian energy company, said today in an interview in Milan that at least $1.5 Trillion of money will be needed to backstop margin calls for trading positions in oil and gas. And we’re not talking about some speculator, we’re talking about utilities and the like that buy gas that have a potential problem. The exec said

“This is just capital that is dead and tied up in margin calls. If the companies need to put up that much money, that means liquidity in the market dries up and this is not good for this part of the gas markets.”

Government backstops are going to be needed he said.

The price cap thing that is being debated, while with good intentions, makes little sense to me because it would only sustain demand and further crimp supply which is what is needed to cure such high prices. How many times over history are we going to experiment with price controls expecting a different result?

The pound is rising about .50% after a slight gain yesterday as Liz Truss takes over 10 Downing Street. I do believe there is reason for optimism with her tenure.

Dollar Strengthening Even More vs Yen
On the flip side is a further breakdown in the yen which busted thru the 140 level late last week and continuing lower the past two days and seems to be headed for 150 which would be a level last seen in 1990. 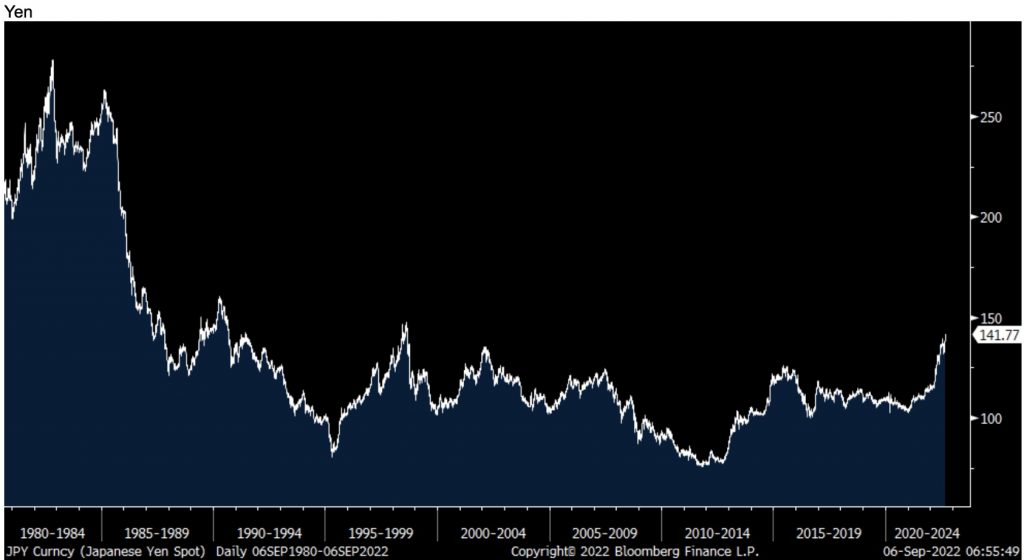 The BoJ will be tested again with YCC as the 10 yr yield closed at .242%. Their 10 yr inflation breakeven is higher by 1.6 bps to .924%. With the ECB possibly hiking by 75 bps on Friday after the Reserve Bank of Australia hiked 50 bps overnight, the BoJ is more and more out of place with policy. The Japanese Finance Minister, as seems customary when the yen falls further, said the large yen moves were “undesirable” but those words are empty.

Long Uranium With 9 Japanese Nuclear Facilities Being Reactivated
It’s a good thing that the Japanese government decided to reopen 9 nuclear facilities by yr end because the energy cost squeeze is intensifying. We remain bullish and long of uranium.

With respect to the RBA, the 50 bps increase was as expected to 2.35%, the highest cash rate since 2015. Governor Lowe in a statement said “Price stability is a prerequisite for a strong economy and a sustained period of full employment. The board expects to increase interest rates further over the months ahead, but it is not on a pre-set path.” That last sentence has the Aussie$ a touch lower as maybe it implies that more 50 bps rate increases are not guaranteed from here and slowing down 25 bps is possible. RBA expects inflation in Australia to peak near 8%. The 2 and 10 yr Aussie yields are little changed for a 2nd day.

German factory orders in July fell for the 6th straight month and down by almost 14% y/o/y. The Economy Ministry said “The development of demand in the manufacturing sector continued to be weak at the beginning of the third quarter in view of the war and high gas prices.” Any of us could have written those words.

It seems every day there is another European factory that is cutting output or outright shutting down in response to the spike in gas prices. Today I saw Aluminum Dunkerque in France, which is their largest aluminum smelter, trimming production by 20%. Norsk Hydro is reducing production by “a few tens of thousands of tonnes” said a spokesperson. On Friday, I saw ArcelorMittal shut a pig iron blast furnace at a facility in Germany and Aldel, a Dutch aluminum producer, was closing some of its capacity. Notwithstanding this, aluminum prices are little changed at the lowest since April 2021 because of demand worries but we’re seeing major supply crimps across a variety of commodities. 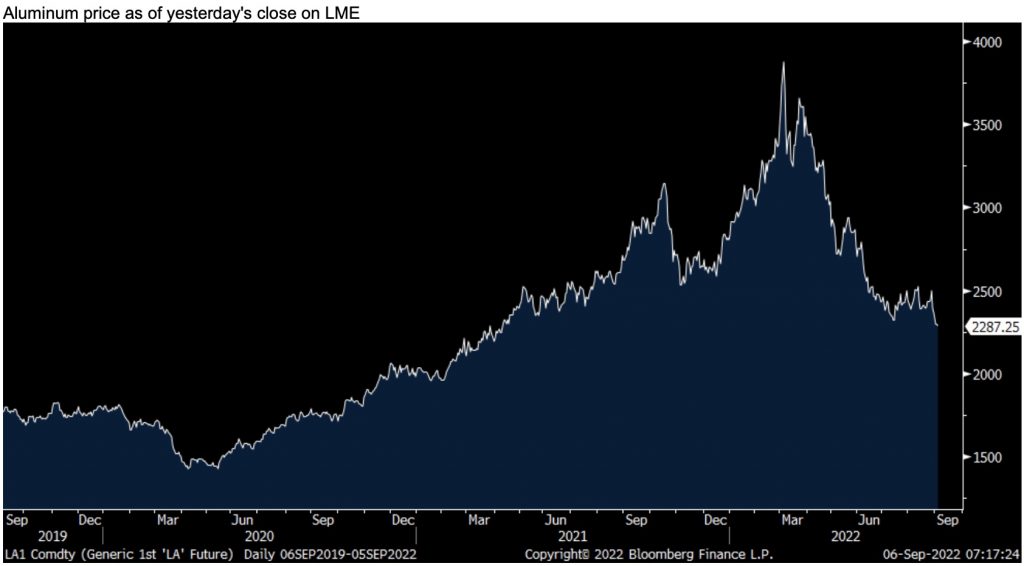 Creating the Dominant Player in Chapais Chibougamau Gold Camp
This acquisition Cements SUP as the dominant player in the Chapais Gold Camp with the largest land position in the camp at over 62,000 hectares, 4 large and expanding gold deposits (Croteau Est, Chevrier, Lac Surprise and now Philibert)

With Croteau, Chevrier existing resources and now Lac Surprise and now Philibert  moving towards a resource declaration in 2023 one can see line of sight to potentially 4mm + oz  in the near term with all 4 properties having significant exploration upside potential beyond that number.

This acquisition and the prior acquisition of Genesis Metals in June brings a critical mass of resources in a concentrated area which dramatically increases the chance of economic development of these oz and their potential value as all these 4 deposits lie within a 50km radius and are adjacent to the 3.2 million oz Nelligan Deposit owned by IAMGOLD.

This large gold endowment was controlled by 4 seperate companies only 4 months ago and today is now controlled by only 2. This means that potentially 7mm oz or more of Gold are now highly consolidated in a contiguous area.

Simon Marcotte, will become the CEO of the newly formed company

Simon was most recently involved with Arena Minerals and its launch in lithium in Argentina and the subsequent strategic investments by both Ganfeng and Lithium Americas. He is also a director and co-founder of Freeman Gold Corp. in Idaho (which is now led by Paul Matysek as Executive Chairman). Simon also started Mason Graphite and more recently negotiated and executed a Joint Venture with Nouveau Monde Graphite, which was a pretty high-profile announcement in Quebec recently. He was also well known for his involvement in gold with Belo Sun Mining from 2010 to 2014. Prior to his corporate involvement, Simon was with CIBC World Markets and Cormark Securities…

Mr. Cantore is a seasoned capital markets professional specializing in the resource sector. He has more than 30 years of advisory and leadership experience having begun his career in 1992 as an investment advisor and then moving into management roles at both public and private companies. One of the most recent successes is being at the helm of Amex Exploration which has gone from just a couple of million dollars of market capitalization when he took the leadership role to a peak of $400 million and more recently at $200 million market capitalization.   During his career he has organized and structured numerous equity and debt financings, mergers and acquisitions, joint venture partnerships and strategic alliances. Mr. Cantore serves on the boards of various companies both private and public.

Michael Gentile (me) will remain the largest single shareholder of SUP and lead independent director of the new combined company.

Extremely Rare Combination
This will create an extremely rare combination of a consolidated mining camp with emerging economic scale in a Tier 1 jurisdiction, coupled with a strong geological and capital markets team.

Compelling Pro Forma Valuation
Pro Forma Entrepresive Value of approximately $60 million CAD which in comparison to the resource and size potential looks very attractively valued, if you now believe as I do that this consolidation has dramatically increased the economic value of these oz and the likelihood that these oz now become part of an economic mine plan at some point in time then the likelihood of a major re-rating on the value of these oz has dramatically increased.

Potential initial resource declarations on Lac Surprise and Philibert in 2023.

Potential spin out of TPK and Ontario properties.

Additional consolidation opportunities in the camp
In short, I could not be more excited about this combination and the rapid consolidation of the Chapais Chibougamau Gold Camp achieved by Northern Superior, I see significant potential for a dramatic re-rating in the stock as the market understands the size and scale of the resources already uncovered at all 4 properties and the increasing likelihood that the size and scale required for an economic development of the Chapais Gold camp is rapidly coming into view. Northern Superior Resources, symbol SUP in Canada and NSUPF in the US. To learn more about this exciting company CLICK HERE.