The price of silver will now begin to surge aggressively, plus gold and stock market interventions.

One big clue/weight of evidence I posted for why XAU (Gold Mining Index) were to break to the upside, was Gold in other currencies breaking out in synced fashion. Now Silver priced in Euros is backtesting after breakout, and also starting to break away. This 20 months consolidation will drive a huge move. 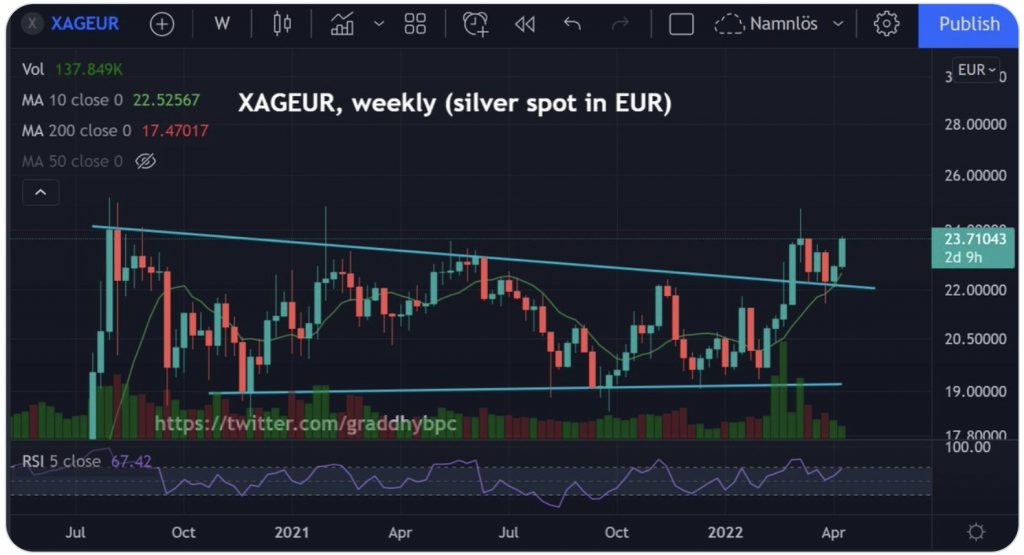 S&P 500 vs Gold
Garic Moran:  S&P 500 to Gold ratio; Gold has significantly outperformed stocks 3 separate decades of the past 9. It remains our forecast, Gold will outperform stocks in the 2020’s. It appears the 4th major inflection point has occurred: 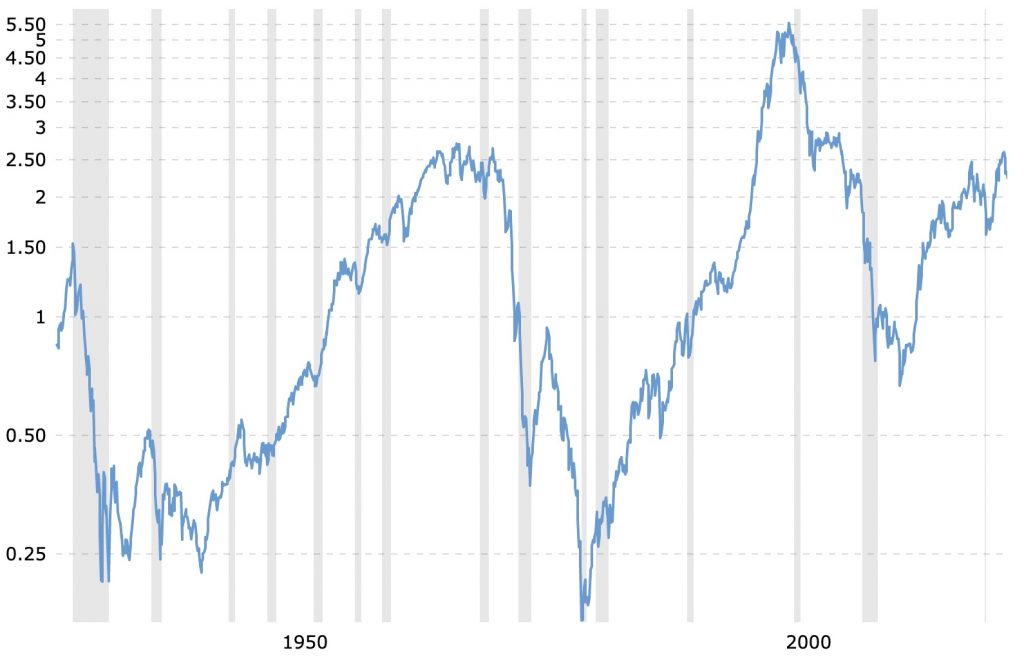 Where Do You Think The Fed Learned How To Manipulate?
Garic Moran continues:  As a reminder: John Law routinely marked up Mississippi (MS) shares every morning and Gold down in a desperate attempt to keep the MS Bubble from popping. As inflation continued to surge, the French citizens sold the marked up MS shares and bought the discounted Gold…

IS THE NEW YORK FED GAMING THE U.S. STOCK MARKET?
Gerald Celente:  Stock index values on opening have bounced up and down recently, changing direction dramatically within an hour but without any news to spark the changes, according to Pam Martens, editor of Wall Street on Parade.

Martens, who has been watching market patterns for more than three decades, thinks she might have the answer.

The Federal Reserve Bank of New York is the only Fed bank to have its own trading floor. Earlier this year, it opened a second trading floor, this one in Chicago.

The New York Fed’s Chicago trading center is located quite physically close to the trading floor of the Chicago Mercantile Exchange, where stock index futures are traded, as are other futures contracts.

It’s known in the securities industry that the closer one’s electronic trading terminals are to the computers that process those S&P 500 trades, the faster one’s trades are booked—even by a tiny fraction of a second—boosting chances that the trade is booked before the market moves.

Imagine “there are some large hedge funds that correctly sense that the Fed has created a market bubble that is going to explode now that the Fed has allowed inflation to get out of control,” Martens says, “and the Fed has to slam on the brakes with a rapid series of interest rate hikes.

“Those hedge funds might be looking to pounce on the market at the open by short-selling S&P 500 futures in Chicago,” which means betting that the price will fall…

“To prevent these hedge funds from seeing this maneuver as an easy means of reaping windfall returns while driving the market lower without resistance, the New York Fed, again hypothetically, might want to launch its own counteracting purchases of the S&P 500 futures contracts” to buoy the price, Martens speculates.

“This would produce what is known as a short squeeze, where the hedge funds have to quickly buy S&P 500 futures to cover the shorts they put on, turning the market on a dime and pushing it dramatically higher.”

That could explain the Dow’s opening yo-yo on those days, she says.

“Is it really the job of the central bank of the United States—which is tasked with setting monetary policy—to have an ever-expanding trading floor in two major trading hubs in the U.S. and [Fed] traders duking it out with hedge funds?” she asked.

These manipulations are apparent to experienced investors. Sooner or later, attentive Americans will realize that the government’s deceit is not limited to the marketplace, but extends into foreign policy.

Indeed, regardless of the country, the governments will do all they can to artificially pump up failing equities. Moreover, when the market declines intensify, The Plunge Protection Team, China’s National Teams and other world “Teams,” plus the central banksters, will coordinate market manipulation strategies in attempts to reverse and/or minimize the selloffs.