Today the man who has become legendary for his predictions on QE and historic moves in currencies and metals told King World News that in this global collapse it will be all about survival, and here is what you need to do…

May 2 (King World News) – Egon von Greyerz at Matterhorn Asset Management (based in Switzerland):  The number one objective of a US president is to be reelected. To achieve that, it is not enough to be good looking or to speak well. No, the only way to be reelected is to buy votes. The price of votes varies depending on the state of the economy. At the bottom of a cycle, relatively little is needed since the economy was about to turn anyway.

LEADERS ARE INSTRUMENTS OF THEIR TIME
A president or prime ministers are instruments of their time and therefore put there to execute the only workable plan. A good example of leaders who made a timely arrival were Thatcher and Reagan. After a period of high inflation and slow growth, combined with weak stock markets, these two leaders were elected, rightly, to manage the upturn and the strong growth period ahead.

Another example of a leader who became Prime Minister at the right time was Churchill who was appointed at the start of WWII. He was a brilliant leader in a war period.

Biden is another excellent example of a leader who was elected because he is the best candidate for the US to survive the next 4 years. The problem is that the patient – USA – might not survive?…

BIGGEST MMT TEST IN HISTORY
So will it be that the operation will be successful but the patient died? Sadly I think the latter is more likely. Because the programme that Biden and his consorts are embarking upon will be the biggest test of MMT (Modern Monetary Theory) in history. MMT is just an extension of Keynesian economics. In simple terms, whatever is needed in the shape of monetary requirements the country has, you just print.

So if people have no job, just print money and give it to them.  If companies go under just give them sufficient funds to survive. If banks with their reckless lending and speculation are on the verge of being insolvent, just print and give them whatever they need so they can continue their irresponsible credit policies. After all the top management needs their big bonuses and someone or something has to pay for that – and MMT is the perfect instrument for achieving this.

And Biden has already, after 100 days, been a masterful user of MMT. His initial programme of spending $6 trillion is perfect for MMT. For the ones who can’t keep up with his profligate spending, let me remind you that these “puny” $6 trillion consist of the $1.9t stimulus plan, $2.3t infrastructure spending and $1.8t expansion of the social safety net.

SPEND $6 TRILLION IN 100 DAYS
Amazing how elegantly MMT can be applied to spend $6 trillion in 100 days OR $60 BILLION PER DAY! The good thing is that the money never needs to be repaid. No, instead of repaying you must print more and more and more. And to service the debt you print still more.

It is of course easy to service the debt at virtually zero interest rates. So what happens if rates go up to 5% or 10% or even 15% like in the 1970s? (I remember it well). Well, that poses no obstacle either based on MMT. You just print even more.

America is “ready for takeoff” Biden just declared to Congress! How right he is and with the MMT launch rocket not even the sky is the limit.

$50 TRILLION DEBT IN 4 YEARS WON’T SUFFICE
Spending $6 trillion is nothing, once Biden & Yellen get going, the total spending and the deficits will most certainly be over $30 trillion in the next 4 years. 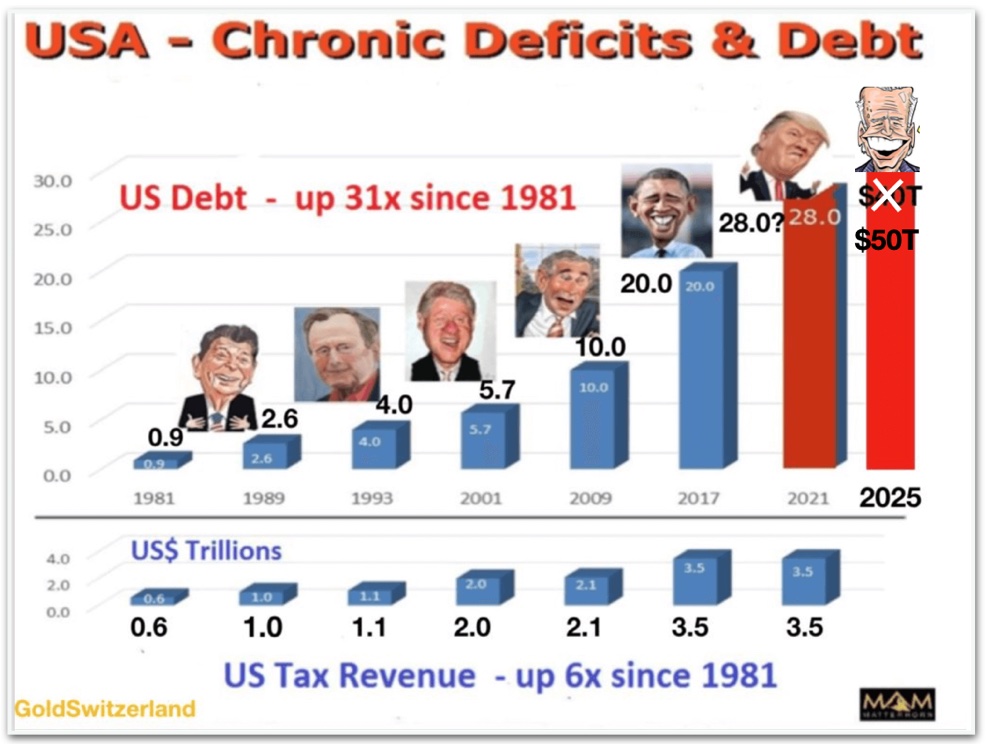 The $28t has already happened and although no one in 2016 thought $40t as possible by 2022, that forecast now seems much too low. At least $50t is now fairly certain. And it could be much higher.

The $28t in 2021 and $40t in 2025 required no genius. Human beings are very predictable and the includes presidents. In the last 40 year, US debt has doubled every 8 years. Thus, the forecast was based on the most basic and at the same time most reliable tool which is history.

DEBT UP 31X  – TAXES UP 6X
What is even more frightening in the table above is that whilst debt has gone up 31X in 40 years, tax revenue is only up 6X. So no one must believe that the US government has any intention of repaying its debt. With a couple of years exception (not the Clinton years when debt went up every year) US debt has increased every year since the early 1930s.

And as I said earlier in the article, there is no need to ever repay debt with MMT. The whole purpose of MMT is to constantly and irresponsibly print ever increasing amounts of worthless money. Because this beautiful MMT theory can by definition never run out of money.

But as Ayn Rand said:

“We can ignore reality, but we cannot ignore the consequences of ignoring reality.”

The MMT clan (including the current Administration) clearly ignores reality. And sadly they are totally oblivious of the fact that THE PIPER MUST BE PAID.

To ignore the consequences of reckless actions is always very costly in the end. A long row of presidents have managed to fool the people for decades by handing over an economy which is burdened by ever increasing debt.

BUBBLE TROUBLE
The risks that now are threatening the US are each one of a magnitude of a missile with a nuclear warhead.

The Bubble is very likely to be pricked by one of the missiles in the illustration well before the next 4 years are over. 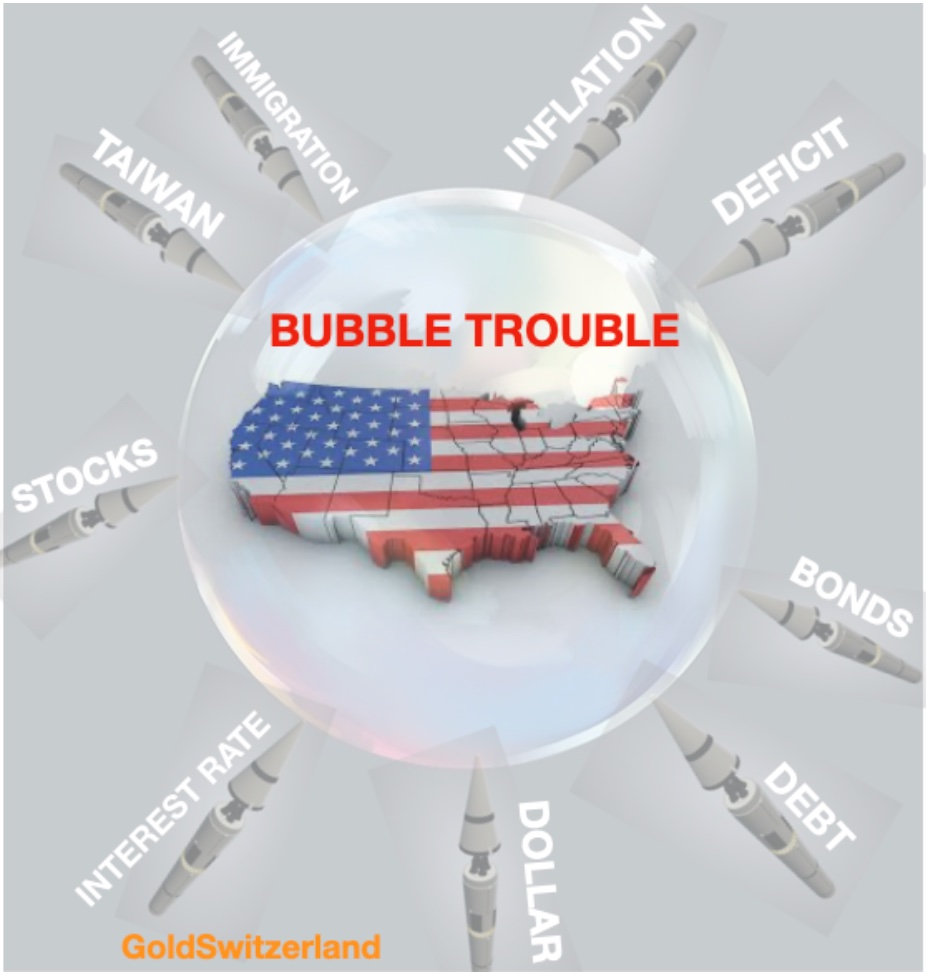 It is impossible to say which missile will hit first but what is very clear is that any one of them would have a devastating impact on the US economy.

Let us say that MMT will work for yet some time since it greatly benefits the leaders and the wealthy. But one consequence which most observers ignore is the currency. The dollar has already lost 84% in real terms in this century. The current rate of money printing will accelerate this fall. This in turn will put enormous pressure on the bond market, interest rates and the stock market.

With all these ominous threats, this saga just cannot end well. The Bubble Trouble US economy is so fragile that it cannot be saved. We will soon learn that MMT was a massive lie and the biggest economic hoax in history.

MARKETS
Stocks are in the process of finishing a major secular bull market whether it has lasted for 200 years or even 2000 years. Only future historians will know. What we do know is that it is a mug’s game to forecast the exact timing of the end of a cycle of this magnitude.

If we take the Dow as an example, we can see from the chart that this exponential move is unlikely to end well. The steepness of the rise since March 2020 is historical and has not occurred before in the last 50 years. 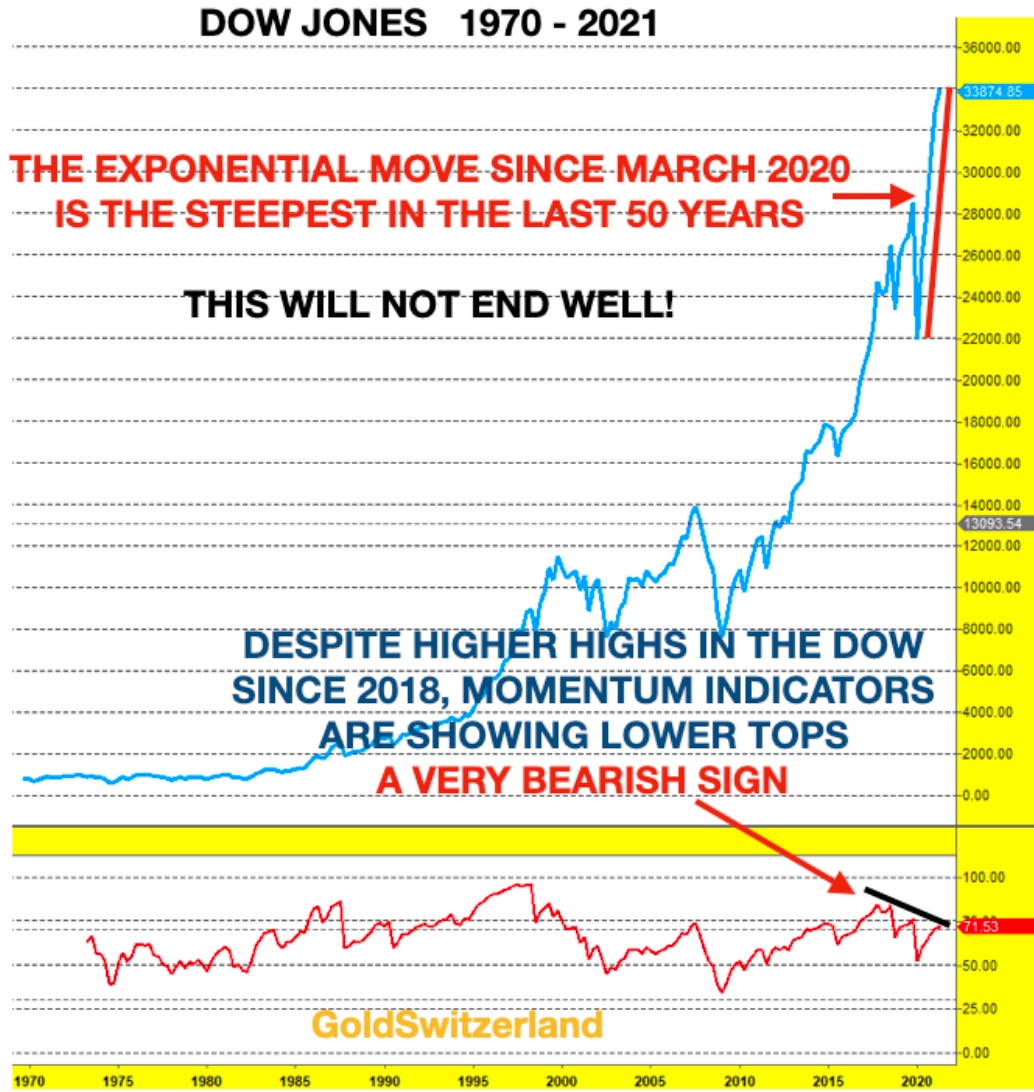 Both technically and fundamentally stocks are now reaching the end of this secular cycle whether it takes a few weeks or a few months.

Some people might say that I sound like a broken record. But they are missing the point. I don’t care when the market tops. All I care about is that investors protect themselves from losing a major part of their wealth when this market turns. Because risk is now at an extreme.

I received an email from a reader today who understands what I am endeavouring to achieve:

“Thank you for these articles you write! I try and read every one you mail me. I heard someone say you are like a broken record, you keep saying the same message over again. I prefer to say that you are one of the most important voices that has not strayed from the unfortunate realities that we all have really no choice but to deal with. I agree with much of your opinions. Thanks again.”

We are now at a point in history and in investing when it is not about making the most amount of money, but instead about losing the least.

There will be virtually no winners in the coming secular bear market for the world economy.  It will be all about survival.

As most readers know, the team at Matterhorn Asset Management believe that the highest chance of financial survival is holding a major investment in physical gold and silver, stored outside a fragile banking system.

Throughout history, this has consistently been the best form of wealth preservation…This will link you directly to more fantastic articles from Egon von Greyerz CLICK HERE.