SHOCKING: This Is What Real Financial Pain Is

As the global crisis continues to accelerate, this is what real financial pain is.

Gold Keeps Getting Hammered In The Empire Of Lies
August 31 (King World News) – Simon Mikhailovich:  Gold keeps getting hammered on an expectation that the Fed can deliver positive real rates w/out triggering a deflationary bust. If it were possible, the Fed would have done it years ago but it hasn’t been possible and still isn’t.

The Great Unwind Is Underway
Otavio Costa:  The Swiss National Bank just sold its largest amount of assets in the history of the data. $55B in the last 12 months.

Let’s be clear: This is not the backdrop of excessive central bank liquidity that drove markets to today’s insane valuations. Quite the opposite…

This Is What Real Financial Pain Is
Peter Boockvar:  Jay Powell talked last week about pain needed to be felt in order to achieve the goal of sharply lowering the rate of inflation but much greater pain is already being felt in Europe over the spike in energy prices. Let’s put some simple math around it to fully understand to what extent. Using today’s German one year forward power price of 650 euros per megawatt (it touched a 1000 a few days ago), it is 16 times where it stood in January 2020 before covid. So, assuming a one for one relationship, if the German household was paying $250 a month for its utility bill pre covid, today they will be paying $4,000 a month. Annualize that to get $48,000 vs $3,000. This is crazy. Yes, there are some price caps and subsidies but you get the point. If you’re a German industrial facility making chemicals using natural gas as your main feedstock for example, in January 2020 let’s just say you were paying $5,000 a month for your natural gas bill. Today, that bill is $104,000 a month. Shocking.

European bonds are selling off again after the August Eurozone headline CPI rose 9.1% y/o/y from 8.9% in July and that was one tenth more than expected. 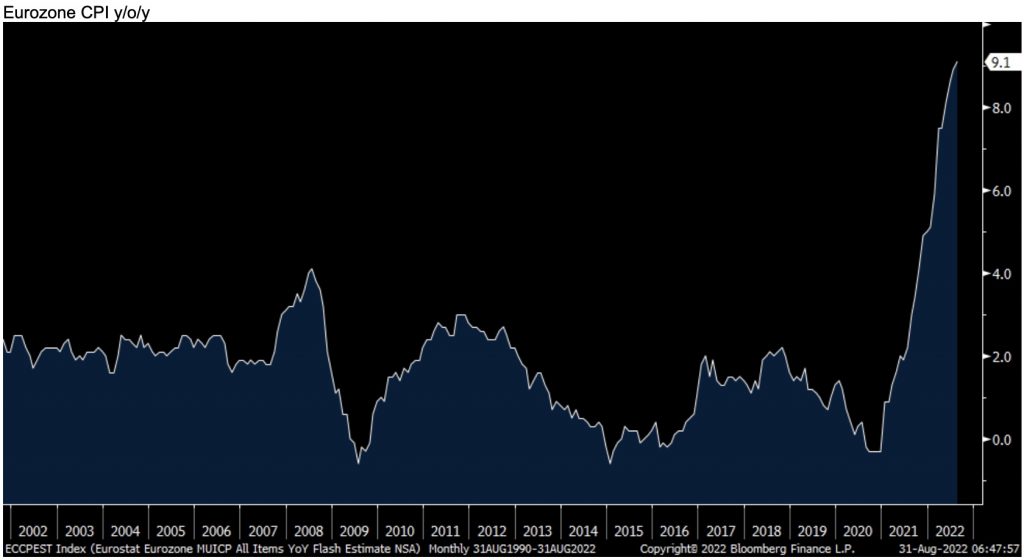 The core rate accelerated to 4.3% from 4% and was 2 tenths above the estimate. The weaker euro is just increasing the stress. It didn’t take long for the head of the Bundesbank Joachim Nagel to respond. He said “There’s an urgent need for the Governing Council to act decisively at its next meeting to combat inflation. We need a strong rise in interest rates in September. And further interest rate steps are to be expected in the following months.” They meet next week and we’ll see if it’s 50 or 75 bps higher for their deposit rate off zero. The German 2 year yield has now doubled since two Tuesday’s ago and is retesting the mid June high. Quite the rapid move. 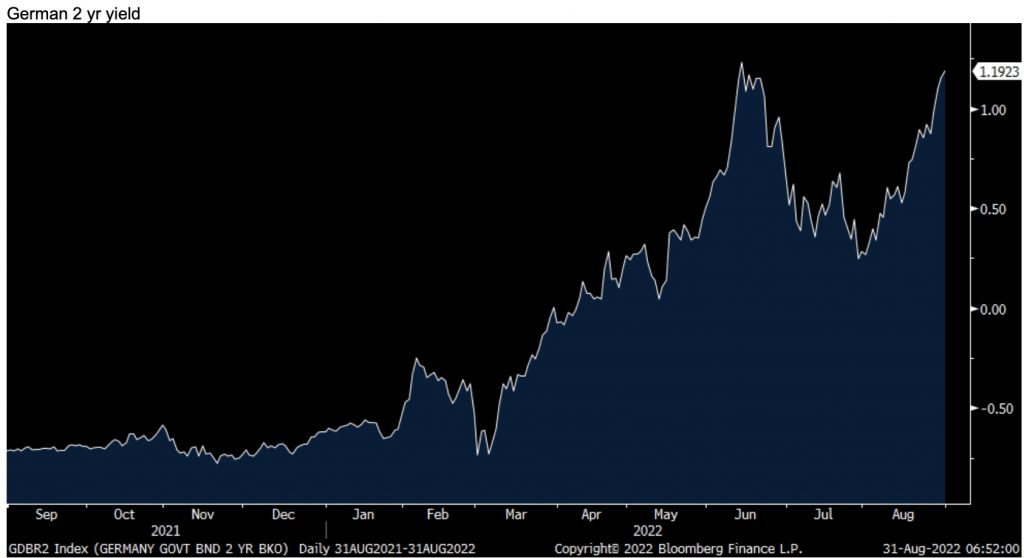 Germany also said the number of unemployed rose by 28k in August, about as expected and their unemployment rate rose one tenth to 5.5%. It’s the 3rd straight month of increases after a long string of declines after the initial covid shutdowns in 2020.

Let’s shift to corporate credit. The Bloomberg CCC high yield index is back to its highest level since May 2020 at 14% as of yesterday’s close. 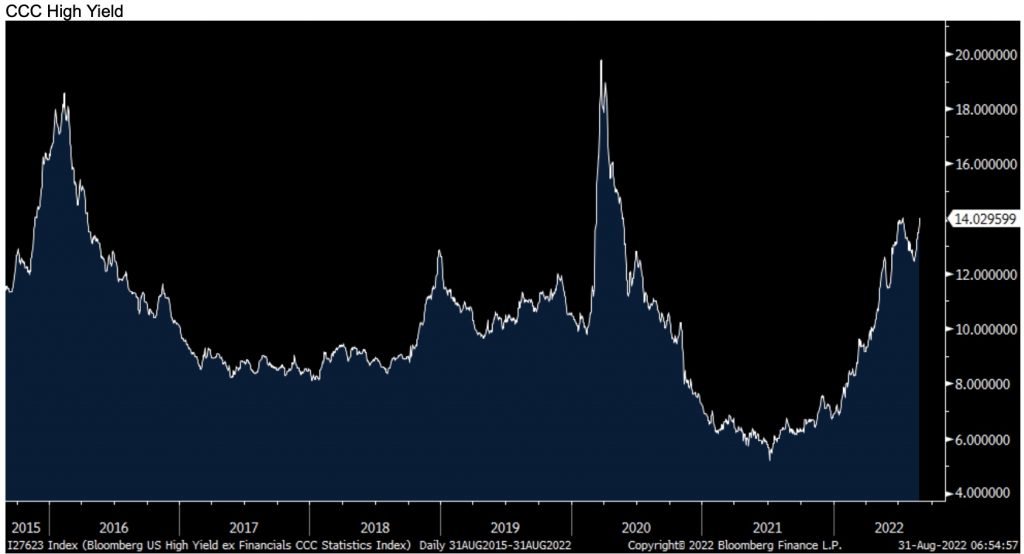 If you take out covid, this is the highest since April 2016. I’ve said before and will again here, the floating rate part of the corporate credit market, now almost $1.5 Trillion is size, is also a must watch as you can be sure no company was budgeting in December for a sharp rise in interest rates in 2022. You can also be sure that many small and medium sized businesses didn’t hedge out this exposure with now revenue growth slowing and profit margins under threat. The LSTA leveraged loan index was little changed yesterday at around a 3 week low. These are where the land mines lie. 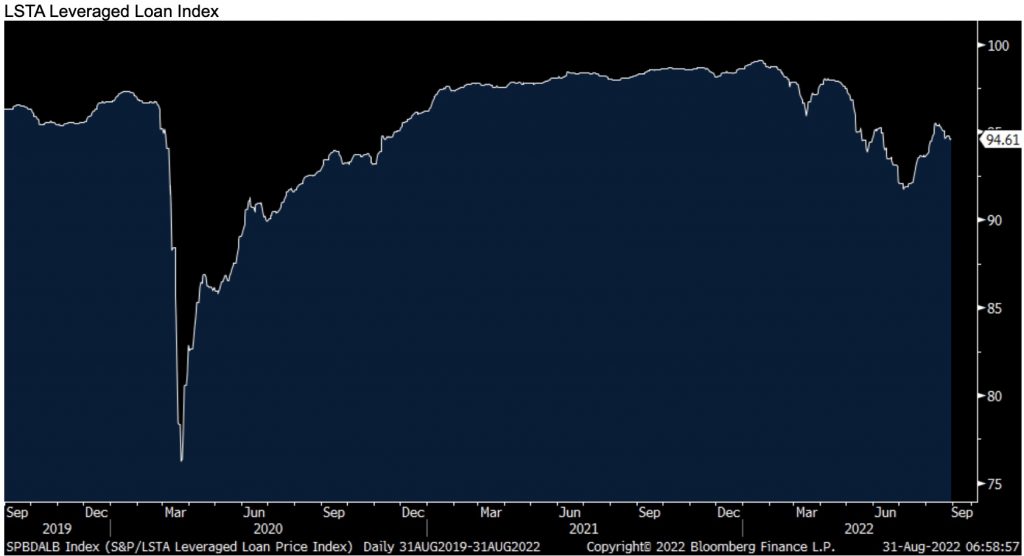 After Snap’s 20% payroll cut on the heels of many stories like this, and ahead of the jobs data this week, it’s clear that tech and related businesses, after garnering the large chunk of investment money over the past 10 years via VC and the public markets, over hired assuming the good times will last and also likely in response to a very competitive labor market. The adjustment is now clearly underway as redundancies are eliminated and leaner companies will result. This at the same time some industries like leisure, travel and hospitality can’t find enough workers.

Consumer Pain In The Real World
This is what Best Buy said in their earnings call yesterday of note.

“As we said in March, we expected our financial results would be softer this year as we lapped record sales volumes. However, the macro environment has been more challenged and uneven than expected due to several factors. And that has put more pressure on our industry, changing the trajectory of our business versus our original plan…We assumed the consumer electronics industry would be lower following two years of elevated growth, driven by unusually strong demand for technology, products, and services; and fueled partly by stimulus dollars.

In addition, we expected to see some impact to our business as customers broadly shifted their wallet spend back into experience areas, such as travel and entertainment. We did not expect and compounding these impacts is a changing macro environment where consumers are dealing with sustained and record high levels of inflation in some of the most fundamental parts of their daily lives, like food.”

With a 15 bps rise in the average 30 yr mortgage rate to 5.80%, mortgage apps fell almost 4% w/o/w. Refi’s dropped by 8% w/o/w and by 83% y/o/y. Purchase apps declined for a 4th straight week, by 1.8% and are 23% below last year’s level. We know what’s going on in housing so no need to add anything other than to say the only question now is to what extent do home prices slow the pace of gains or outright fall in some markets.

China reported its August state sector manufacturing and services PMI and it fell to 51.7 from 52.5 with manufacturing below 50 at 49.4 and services at 52.6. China can ease and spend ever more money on infrastructure all they want but until they get off their strict covid policy, it is spitting in the wind, or pushing on a string to be more conventional with the wording. Also, the distress in the housing market, which will inevitably separate the strong from the weak, still has more time and pain to play out.

Silver May Be Set For Parabolic Spike, Gold Update, Plus A Fascinating Email From A KWN Reader