With historic patterns unfolding in global markets, the Godfather of newsletter writers, 90-year old Richard Russell, writes about the big picture for gold, stocks, the U.S. dollar, and an eventual collapse.  The 60-year market veteran also included two fantastic charts to go along with his outstanding commentary.

Russell:  “Below you see the ratio GDX to GLD (gold). The chart shows that the gold miners are now at the lowest level in the past 10 years compared to gold. This tells me that the miners are so cheap and hated and out of favor that many can be bought as perpetual warrants. The key to the whole gold picture may be when this ratio turns up and crosses above its red 200-day moving average. In the meantime, we wait and patiently watch. At this point, I’m wondering whether the ratio that you see on the chart is in the process of building a bottom. 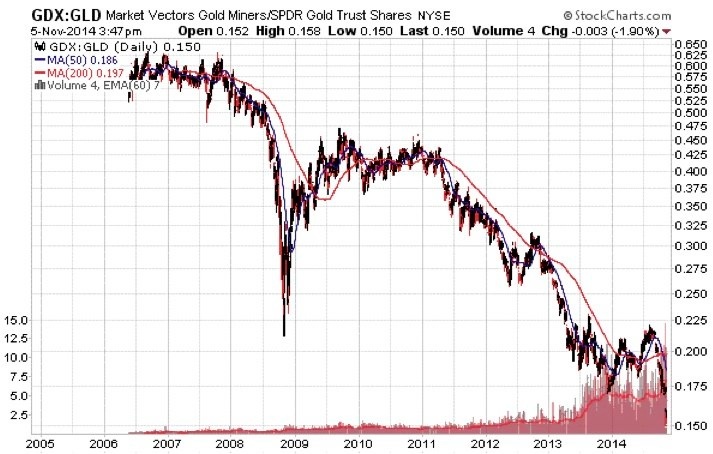 Below is a 10-year chart of Newmont Mining. The stock hit an important low in 2009. Newmont appears to be consolidating above its 2009 low. Here again, I’m watching to see whether Newmont can reverse itself and break out above its consolidation formation. 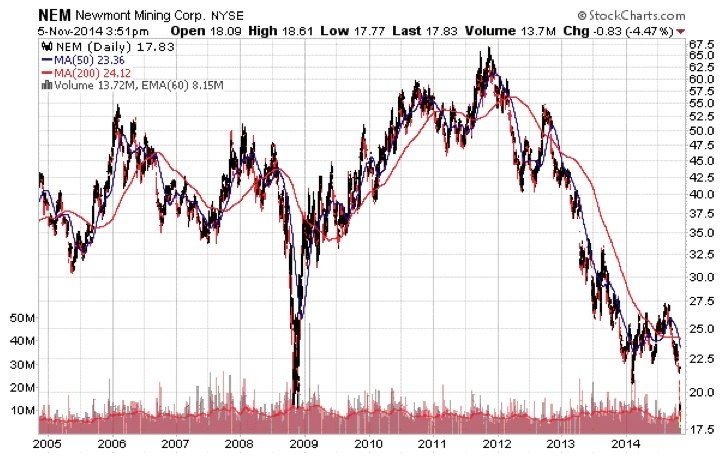 The Dow and Transports both closed at new record highs, with the S&P and NASDAQ also closing higher. Precious metals are not faring well today, with gold at 1151, down 18. My feeling is that gold is deep into its basing area. Money continues to move into the US dollar as a safe haven. In the big picture, the world continues to deleverage and deflate, which in the end may force the Fed to revive QE, but probably under a different name.

Late Notes – The Dow and Transports closed at new record highs, giving us another bullish Dow Theory signal. The big question is whether the new bull signal will have a carry through. My suspicion is the nation is still in a recession and the big money is distributing stock under the guise of a booming economy. New highs in the averages without follow-through makes big money skeptical regarding the economy.

As for me, I feel comfortable in my long-term tradition of gold and silver. After all the currencies collapse, these will be the two last men standing.”