The war in the gold and silver markets continues to rage after the recent takedown.

January 12 (King World News) – James Turk:  It’s good to see gold and silver stabilising after the drubbing given to them on Friday, Eric. It’s worth reviewing that event because we’ve seen it happen the same way many times before.

The first wave started Friday morning at exactly 8.00am London time. Traders barely had an opportunity to turn on their screens. There was a barrage of paper selling. Nobody sells in size at that time of the day unless your goal is to paint the tape. Any profit maximizing trader looking to exit a long position would not be so careless…

Obviously the barrage of selling drove the price of precious metals prices lower. So it was mission accomplished by the seller. The tape was painted, and it got the ball rolling downhill.

Painting the tape like this reminds me of the infamous “Brown bottom” when the gold price reached a new low price after the British Chancellor, Gordon Brown, announced in May of 1999 that Britain was selling half its gold reserves. He painted the tape by announcing the sale in advance, rather than the logical practice of announcing it after the trade is completed.

In the aftermath of the impact from Mr Brown’s propaganda, gold fell into the $250s before turning higher. Anybody who sold after the announcement obviously was trading on emotion rather than the underlying fundamentals. Gold was cheap, so after stabilising and absorbing the selling caused by the announcement, the gold price started climbing and never looked back.

I’m not saying that history will repeat and that within days gold will climb higher from the $1840s just like it climbed from the $250s in 1999, and then never looked back, but it could. The reason it could is the same as in 1999. The fundamentals as I see them are very bullish for gold. In other words, gold is undervalued, and fiat currencies – all of them – are overvalued.

Silver is undervalued too. Here is the March silver chart at the Comex close today.

Silver Needs To Break Back Above $26 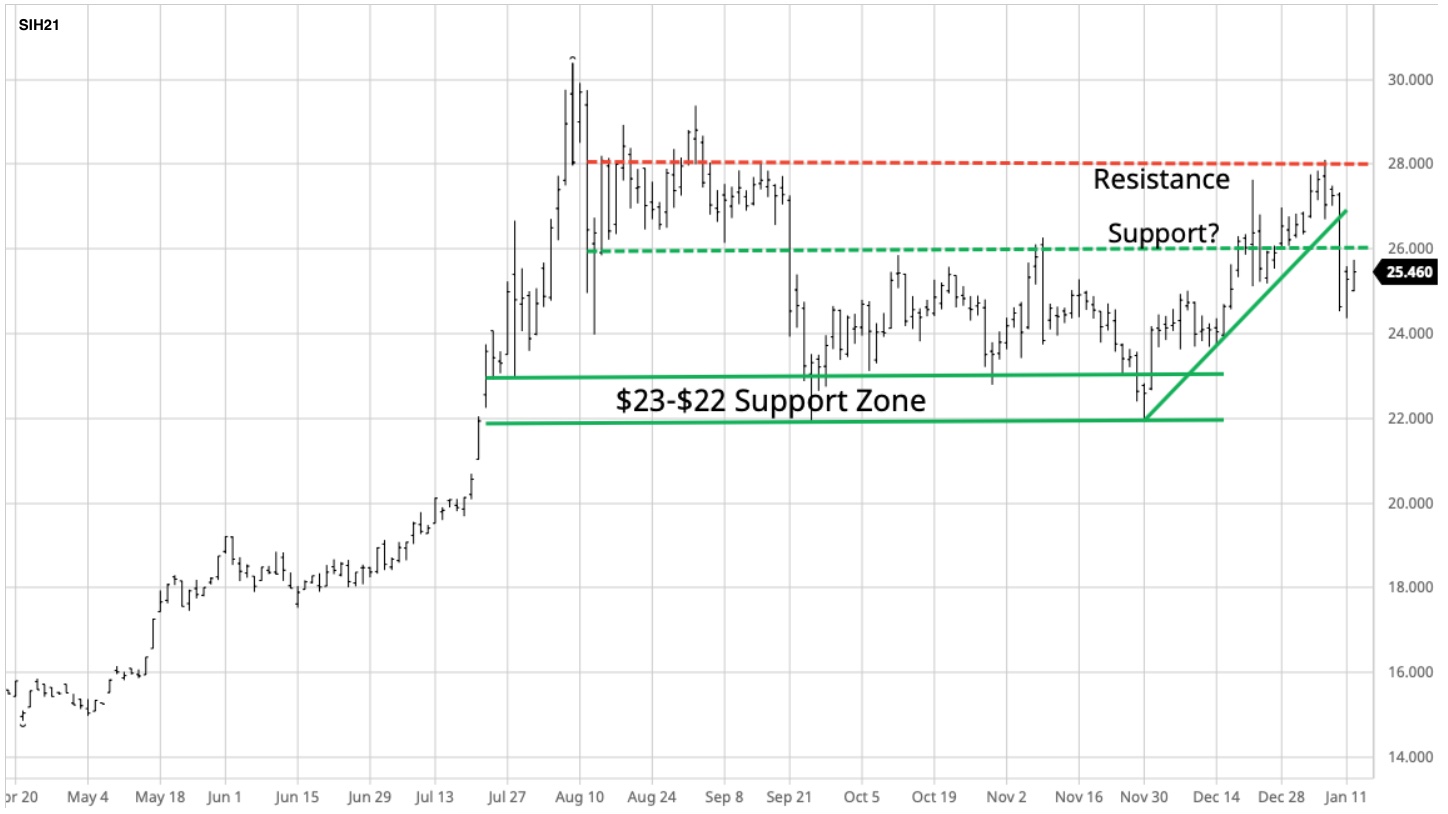 Looking at this chart two trends are perfectly clear. The consolidation of last year’s big advance from that low continues. Second, silver remains within a major uptrend from the March low, which is bullish even though silver broke the short-term uptrend from the November low.

It is disappointing that support at $26 did not hold on this latest pullback. However, given silver’s higher volatility than gold, a deeper pullback like this one should not be unexpected.

For quite awhile now I been recommending that everyone watch the gold/silver ratio. It has been my contention that silver will rocket higher once the ratio falls below 70…

Interestingly, the ratio did touch 70.3 last Wednesday. Maybe that was close enough to breaking under 70 to make the central planners nervous, so they dumped a lot of paper to paint the tape on Friday. Who knows?

Anyway, with inflation sensitive commodities like soybeans and copper in major uptrends, I suspect that it won’t be long before the gold/silver ratio breaks below 70. When that happens, I expect that silver will blow through $30 on its way to its all-time high of $50.

When the $50 level is hurdled, silver’s bull market begins. It will be finally joining just about every other commodity and financial asset on the planet already above their 1980 high. Based on my reading of the fundamentals, silver’s new bull market will be as good as that in 1970s, which was spectacular.

But remember, Eric. To protect your wealth from the counterparty risks in the banking system, always buy physical gold and physical silver. Own the real thing and not some paper promise.