On the heels of the historic Brexit “Leave” vote and the massive turmoil that ensued in global markets on Friday, today Peter Boockvar says gold will be the last man standing.

Here is a small portion of what Peter Boockvar wrote today in the aftermath of the historic vote by Great Britain to leave the EU:  I’m sure you’ve read a lot over the weekend on the aftermath of the UK vote. Many have their predictions of what happens from here both in Europe and ripple effects throughout the rest of the world. Many have their fears about the fate of the EU and euro zone, the drawn out nature of the UK negotiations as the UK recession odds go higher, the Chinese quietly continuing their devaluation, etc…

Peter Boockvar continues:  As there is no blueprint for what we are currently experiencing, I have to say how can any of us have any real conviction on any particular outcome from here. We can surely throw out all the different possibilities but only time will tell us which paths we go down. That said, we will always have some form of a reversion to the mean in both economic and market cycles and we are at the end I believe of a cycle that began in 2009. As is typically the case, market moves usually go further than the economic (or earnings) cycle both up and down. Valuations expand faster than earnings growth on the upside and do so also on the downside. It is why I like the market cap to GDP (or GNI or GNP) ratio as it measures the separation between the two.

Valuations never matter until they do and now is when they do and that ratio is important to be watching again. For US stocks, the gap is off the recent highs but is still at the 2nd most widest in the post WWII time frame.  Here is a good look at some charts from Advisor Perspectives, http://www.advisorperspectives.com/dshort/updates/Market-Cap-to-GDP.

Chart Of The Buffett Indicator From dshort.com 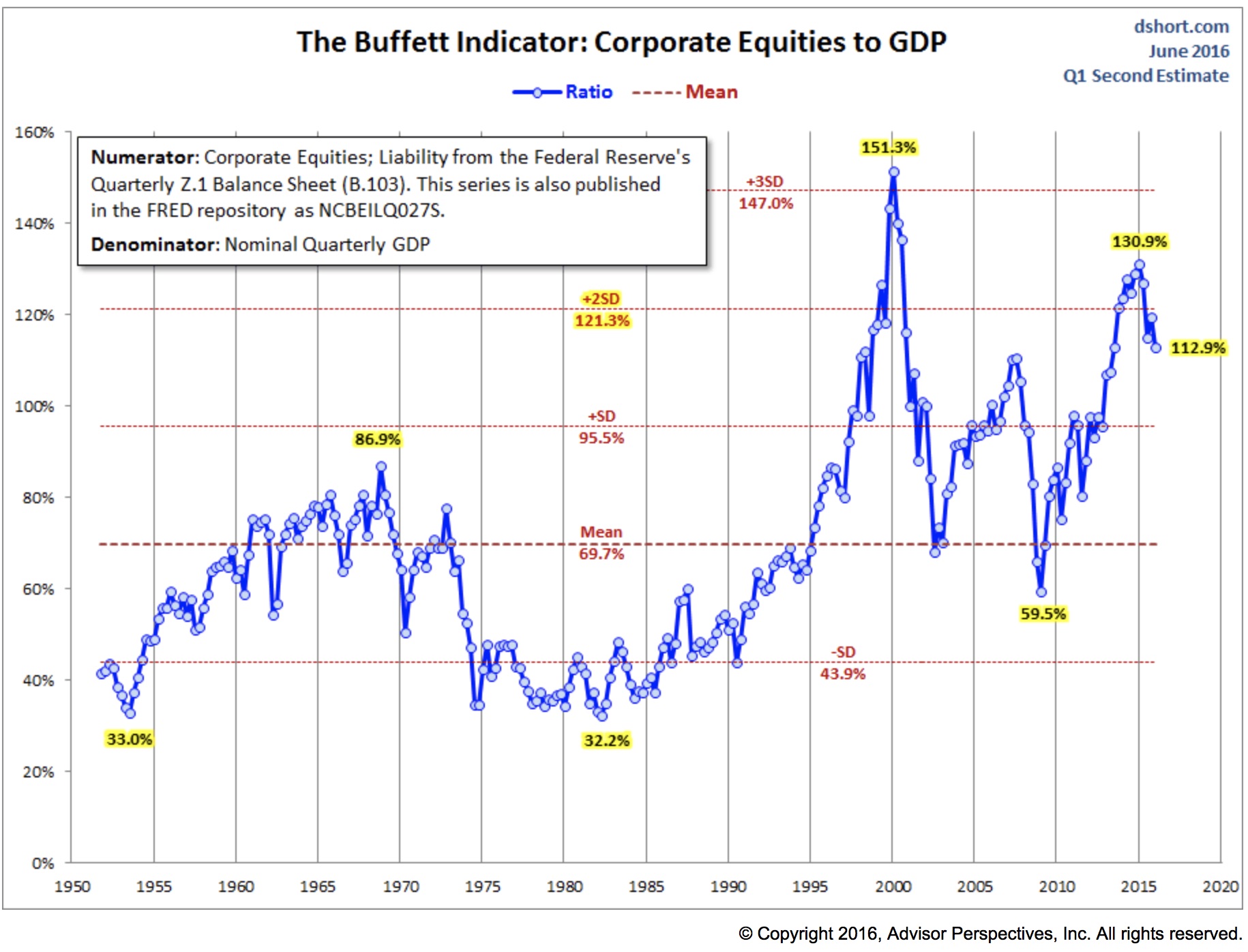 I bring this up because asset prices have become the bus driver so to speak of the economic bus rather than the other way around seen historically. This of course is an Alan Greenspan legacy. Bottom line, the global economy will continue to slow, especially with now the large amount of short term unknown’s emanating out of Europe. How asset prices respond from here will be a key determinant of the extent of the slowdown as the psychology of any decline will then recycle thru business decision making. It is the reverse wealth effect essentially.

As for stock markets outside the US, EM and European markets, deservingly so for now, are much cheaper and thus more attractive for anyone with a time horizon more than 1-2 years. In terms of currencies, gold will be the last man standing.