On the heels of Mario Draghi proposing that the ECB spend $1.3 trillion to revive the sagging euro economy, today King World News is publishing a powerful piece that takes readers on a trip down the rabbit hole of the ongoing global financial crisis, central bank lies and a world of propaganda.

Did You Know That Central Banks Lie?

January 21 (King World News) – On January 15, 2015 the Swiss National Bank (SNB) suspended its 3-year old commitment to the Swiss franc-Euro peg, sending the Swiss franc's volatility above the Ruble's! Here is what happened to investors in the formerly "solid" Swiss markets:

Swiss franc surged 39% against both Euro and USD, ending the day up 23% against Euro and 21% against USD. 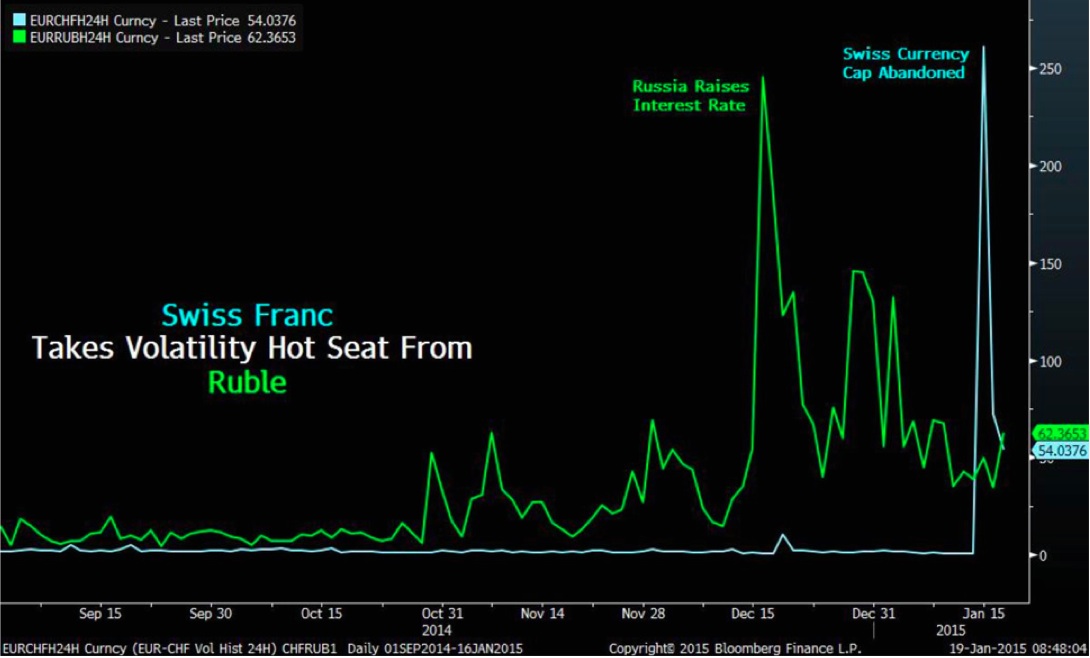 Swiss equities tumbled as much as 14% before ending the day down "only" 8.7%.

For context, the equity move was equivalent to the Dow losing 2,500 points intraday and closing down "only" 1,500 points. Dramamine, anyone?

Then on January 15, the same Thomas Jordan announced with a straight, if reddened, face that the peg "was no longer justified." He blamed the growing "divergences" and alluded to the ECB's expected Euro QE binge, against which the peg has no hope.

"The SNB has decided to discontinue the minimum exchange rate of CHF 1.20 per euro with immediate effect…Recently, divergences between the monetary policies of the major currency areas have increased significantly – a trend that is likely to become even more pronounced. In these circumstances, the SNB has concluded that enforcing and maintaining the minimum exchange rate of the Swiss franc against the euro is no longer justified." (SNB)

SNB followed the playbook of all central banks (and governments) who lose control: the only way to preclude "fueling speculations" is to ambush the markets. Those who rely on the central bankers' "guidance" when making investments would do well with this refresher:

"When it becomes serious, you have to lie."

"Monetary policy is a serious issue. If we indicate possible decisions, we are fueling speculations. … I am for secret, dark debates." — Jean-Claude Juncker, President of the European Commission, speaking in 2011 about the European crisis.

Despite the consensus that the Global Financial Crisis (GFC) ended years ago, it is, in fact, ongoing and so are the lies.

History is clear – no price fixing cartel has survived once a member broke ranks. The SNB hasn't just lost control, it has broken ranks with the central banking "cartel," which runs a much larger fix – near-zero risk premiums against the toxic background of epic debts and subpar growth.

Since 2011, confidence in central banks has propelled stocks higher and gold prices lower. The SNB's confidence-shaking surprise has marked, we believe, the end of the second pause of the GFC, during which central banks have kept a united front needed to maintain stability and fuel risk assets through price fixing, money printing and a promise to have "investors' back."

All rigged games rely on confidence but what other central bankers' lies are about to be exposed? That QE had ended? That the Fed will raise interest rates? That an orderly exit is possible? That we really can consume more than we produce in perpetuity? Really?!

This brings us to gold, which has virtually no long-term correlation to stocks and a near-perfect inverse correlation to confidence. Before the next "surprise" wreaks even more havoc, investors would benefit from reassessing their ideas about diversification and safe haven allocations.