Here is a look at gold’s low and what is going parabolic.

Gold
September 28 (King World News) – Graddhy out of Sweden:  Have been saying for 5 weeks or so that Aug 9th looks pretty good as a major (weekly cycle) low so far. Today’s new low on day 35 means it is late in daily cycle for a daily cycle low, and could put in that low at any time now.

Late In Cycle, Daily Low For Gold Close At Hand 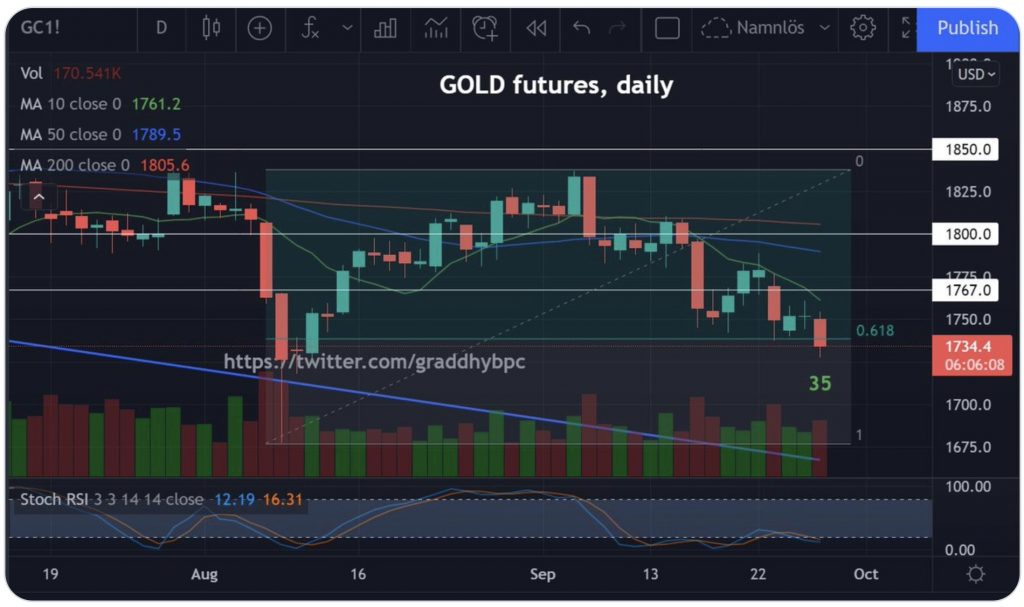 Inflation
Peter Boockvar:  Home buyers in July paid 20% more for homes vs July 2020 according to S&P CoreLogic’s home price index. This is a rate of gain never before seen. Leading the way, home prices in Phoenix spiked 32% in July and by 28% in San Diego. On the slower end, they rose ‘just’ 13% in Chicago and by 14.5% in Minneapolis. 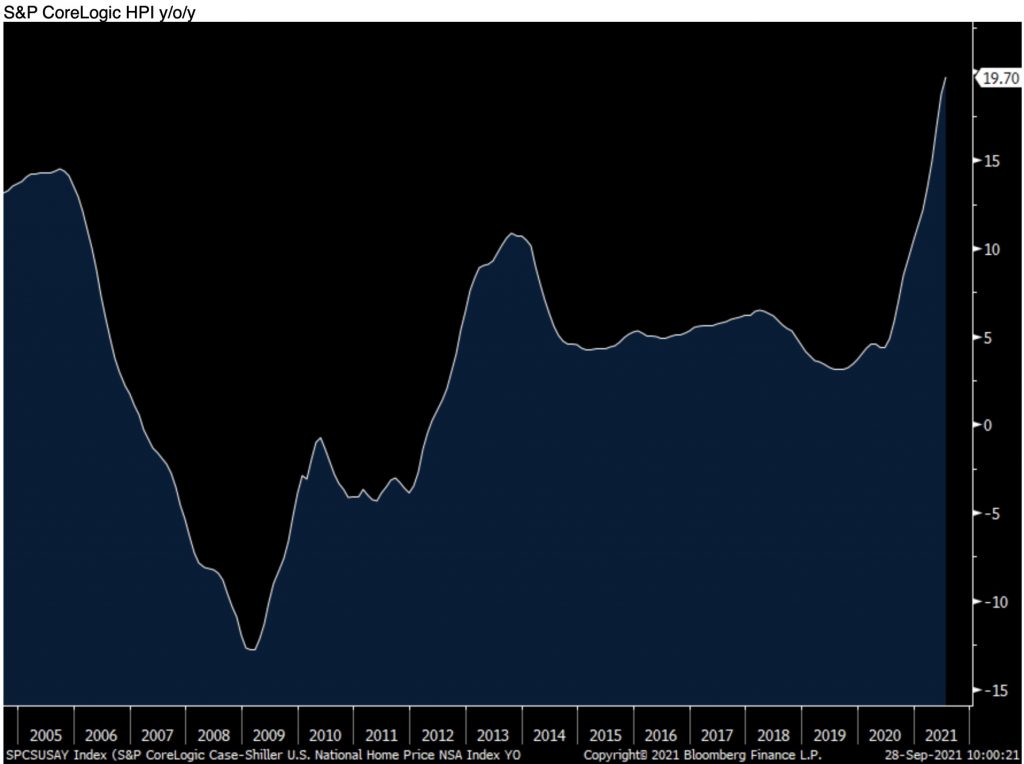 Yes, we can blame the supply side for not delivering enough homes but we can also blame the Federal Reserve for their aggressive monetary policy that pushed the demand side via historically low mortgage rates. We now know the perils of pushing things too hot as faster home price gains more than offset the benefit of lower monthly payments.

The Conference Board’s consumer confidence index fell to 109.3 in September from 115.2 in August with both main components down m/o/m. This compares with a print of 132.6 in February 2020. 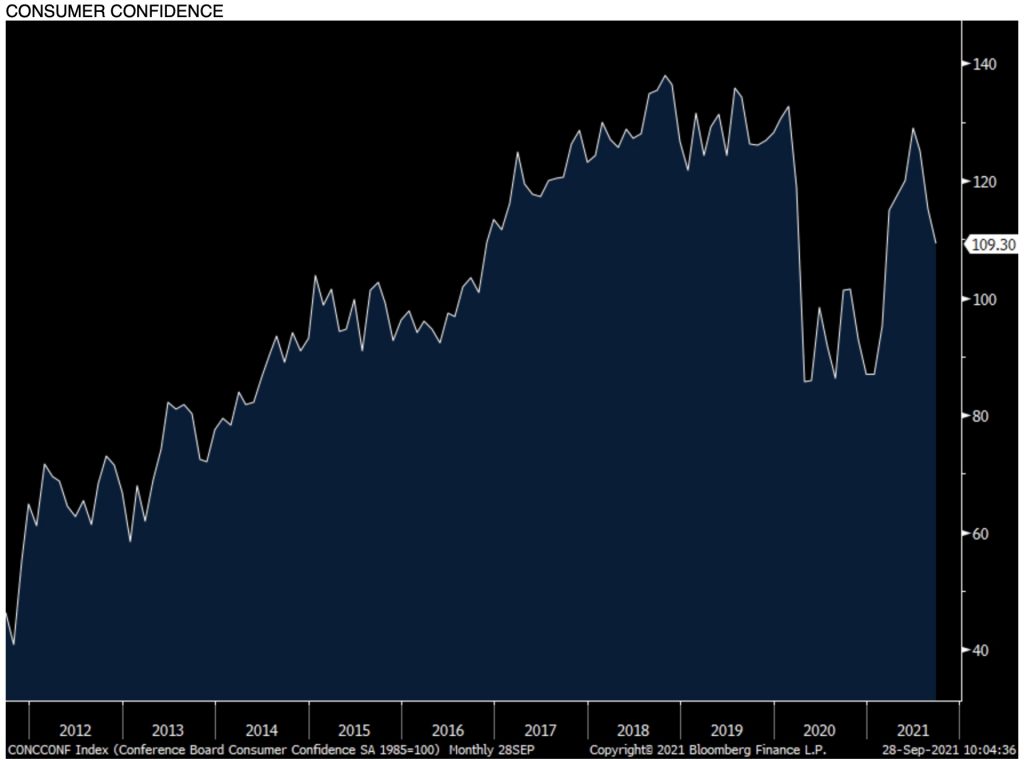 One yr inflation expectations moderated by 2 tenths to 6.5% off a 10 yr high but that’s just back to the 6 month average and which is vs the 5 yr average of 5.1%. 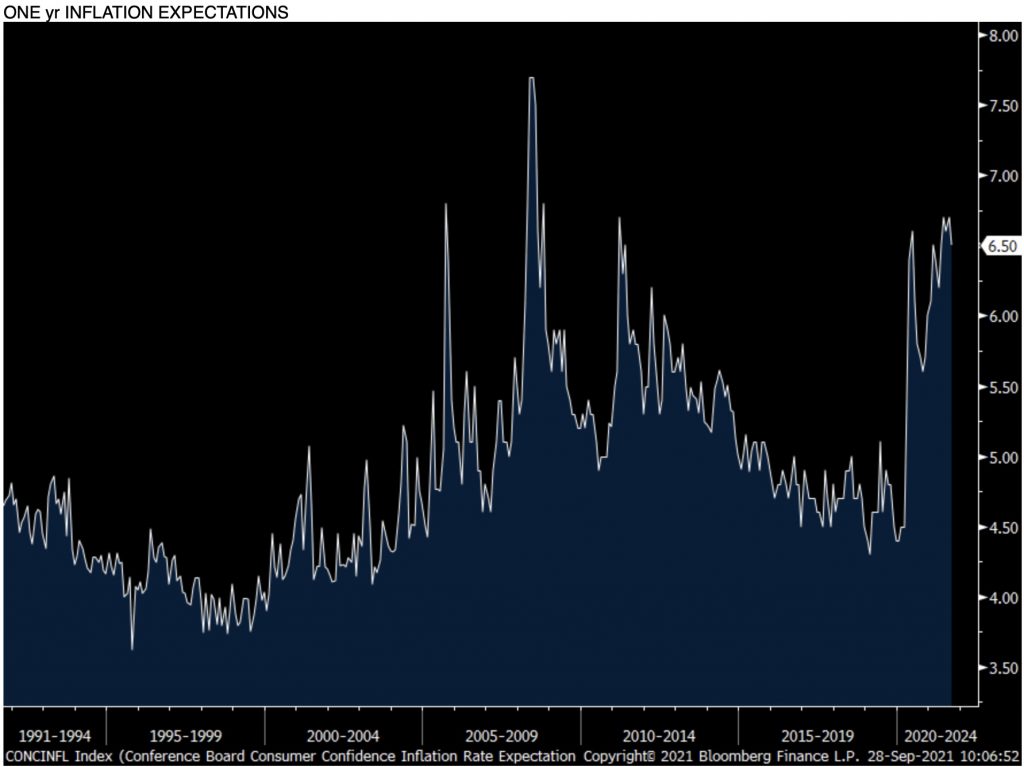 As seen in the UoM data for September, there were further declines in spending intentions for auto’s, homes and major appliances…

The Conference Board is blaming Delta as dampening optimism but I argue that is just not the case as just watch any weekend sporting event with packed stadiums. I think it’s rising inflation as seen with the drop in spending intentions.

Following yesterday’s miss on Dallas manufacturing, today saw the Richmond manufacturing index fall to -3 from +9 vs the estimate of +10. 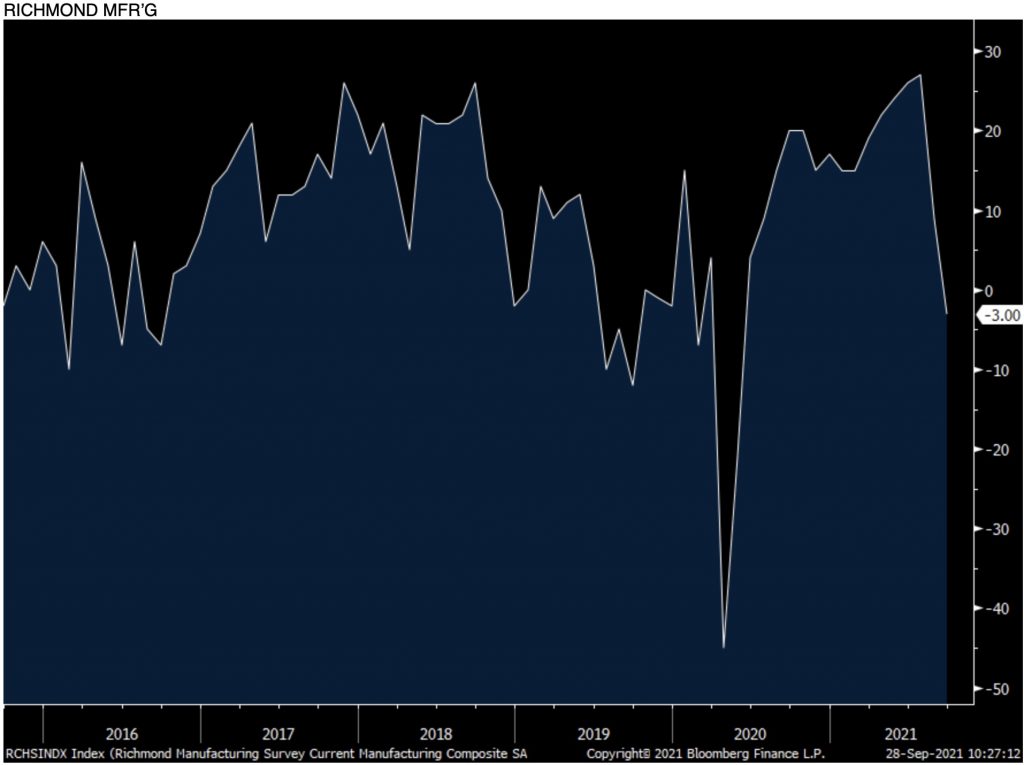 Prices paid have gone parabolic as a print of 14 compares with the historical average of just 2.2. 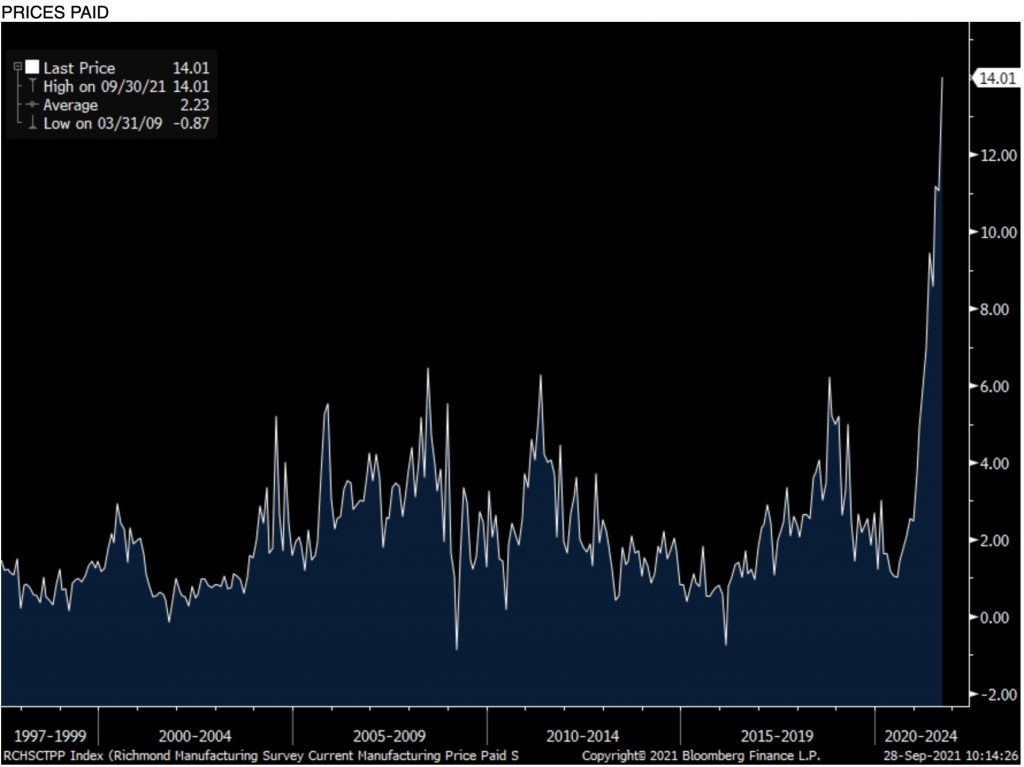 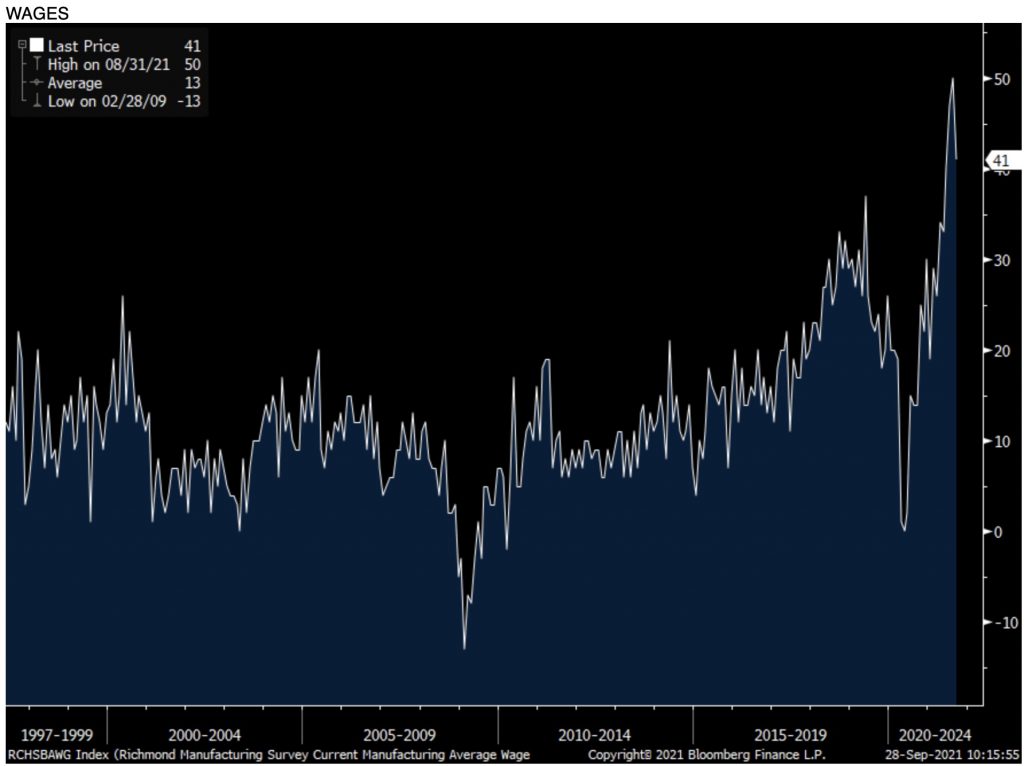 With regards to expectations, inventory levels went further negative, price expectations continued higher as did for wages and employment. 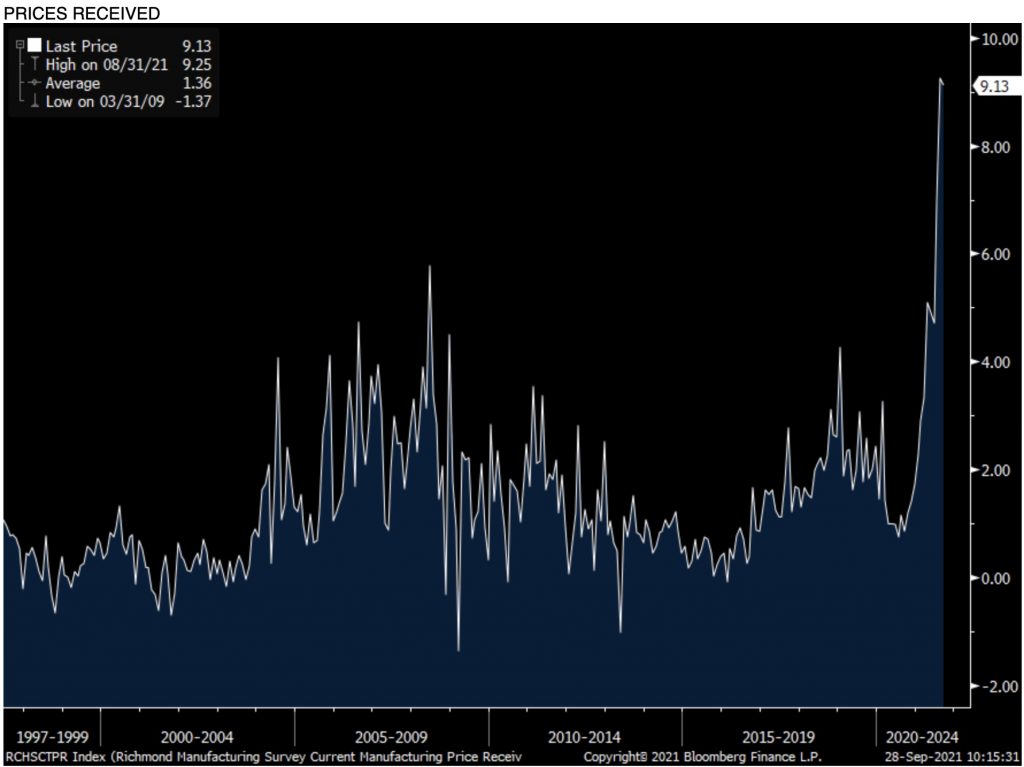 Bottom line is that we know full well what the bottom line is at this point with all the challenges that manufacturers are facing in not just making a product but getting it from point A to point B. 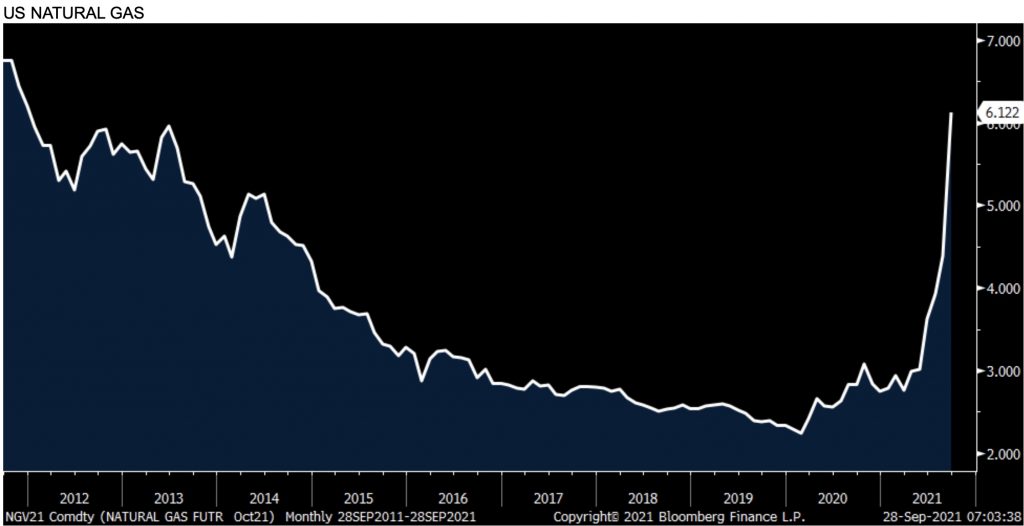 John Embry – As We March Closer To Economic Armageddon, Something Is Terribly Wrong