One of the greats in the business just warned that the Fed needs a half point rate cut now, and more soon.

When the Fed is slow to make the needed response, we get overly fruitful bubbles and overly onerous economic recessions. — Tom McClellan

Fed Needs A Half Point Cut Now, And More Soon
July 26 (King World News) – Tom McClellan, Editor The McClellan Market Report:  The FOMC is expected to cut short term interest rates at its upcoming July 30-31 meeting, but they probably will not cut as much as they need to.  The FOMC is usually slow to do the right thing. 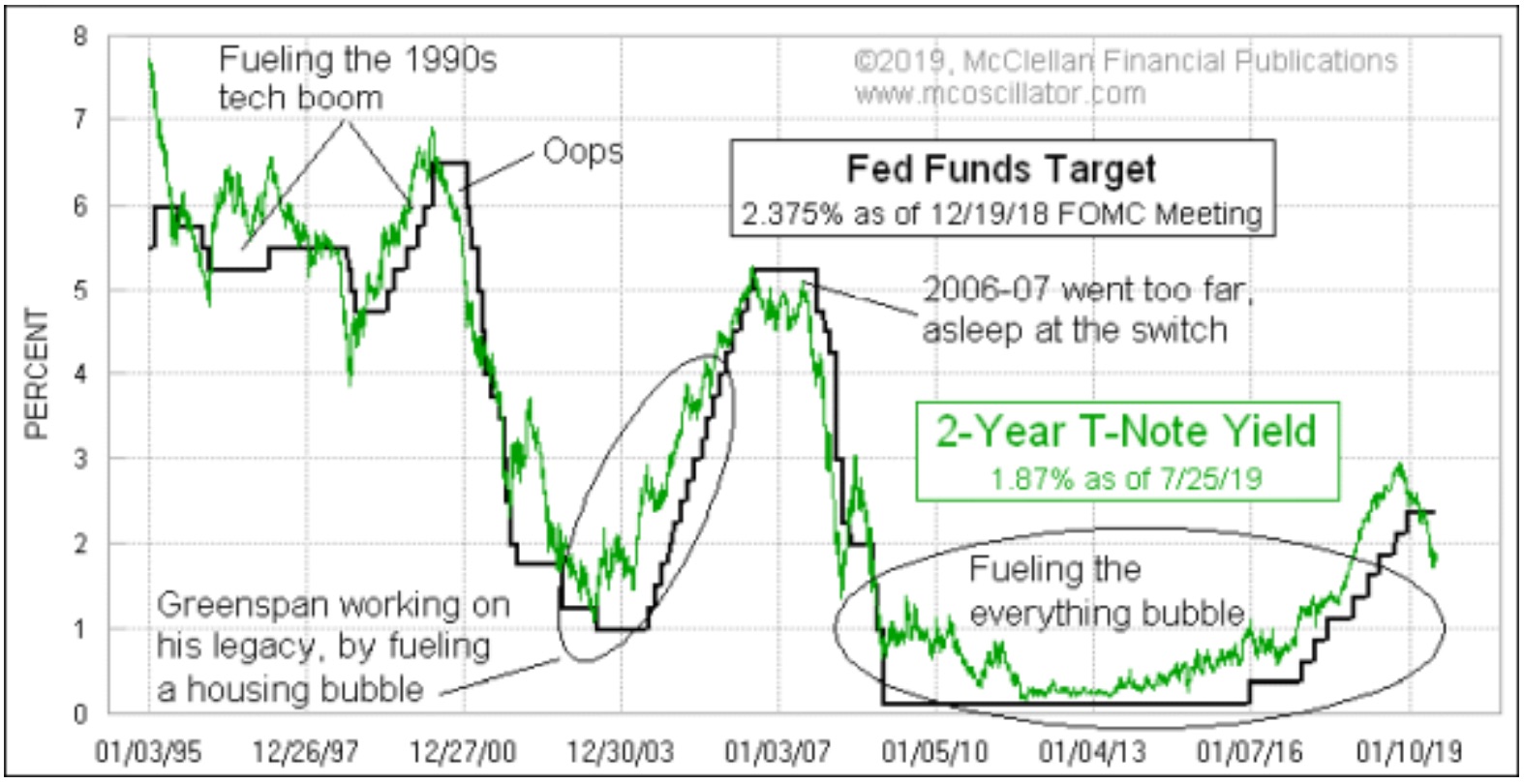 The Fed Funds target is still up at “2-1/4 to 2-1/2%”.  I take the midpoint of that range for the purposes of display in the chart.  The latest data for the 2-year T-Note yield shows it is a half-point below the Fed Funds rate.  So if the FOMC members want to do the right thing, and adjust their target rate to where it should be, they should go ahead and cut a half point now.

This next chart is one shown in our most recent McClellan Market Report newsletter, and it says that there are going to be falling short term rates over the next 10 months, and possibly longer.

GOOD NEWS FOR HIGHLY INDEBTED GOVERNMENTS: Expect Falling Rates Over The Next 10 Months 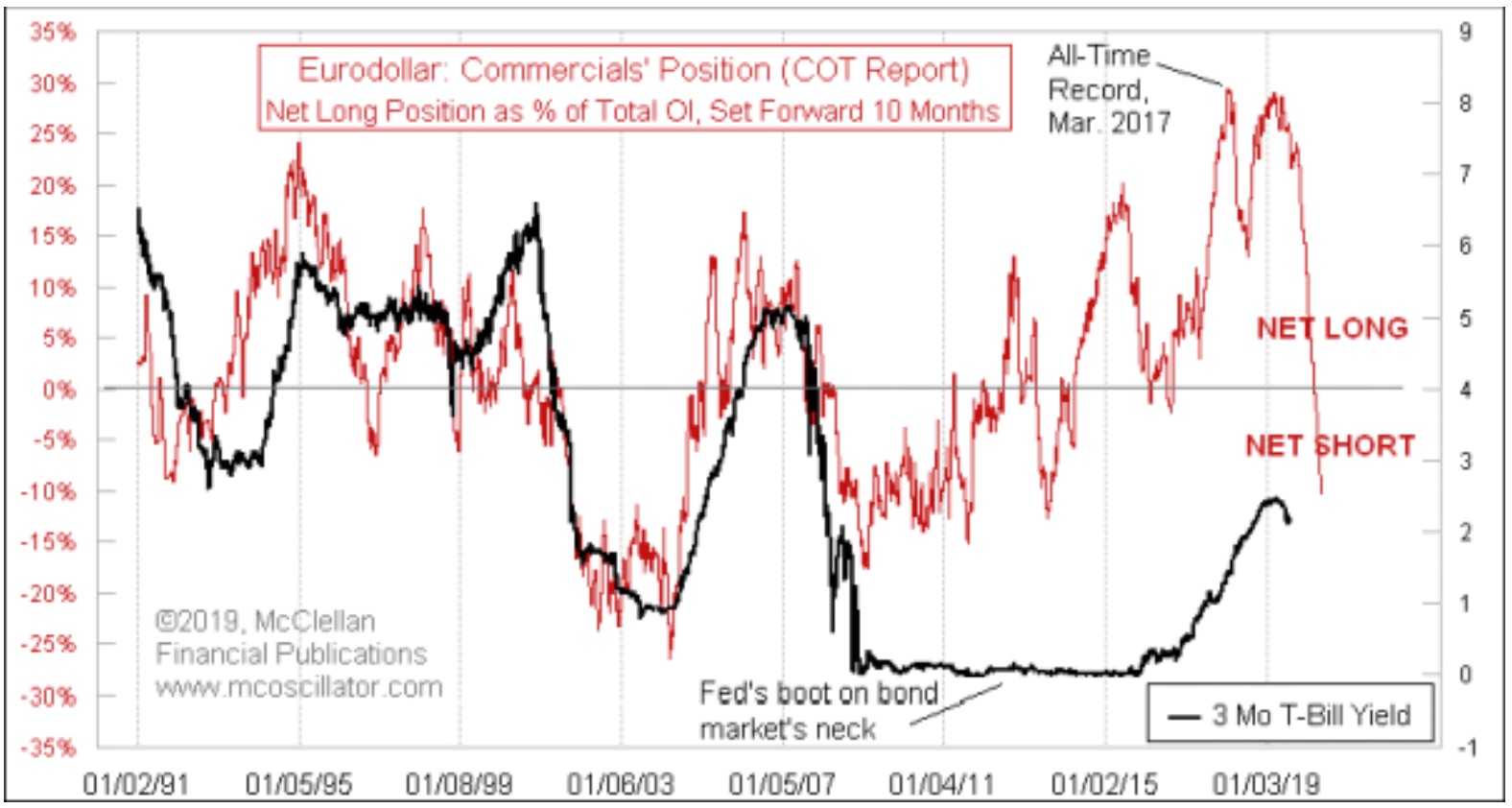 The red line in the chart is the net position of the commercial traders of eurodollar futures, as reported in the weekly Commitment of Traders (COT) Report, and it is shifted forward by 10 months in order to reveal how the movements of short term interest rates tend to echo its changes after that lag time.  A “eurodollar” in this case refers to a dollar-denominated time deposit in European banks, so this is an interest rate futures contract, and not a currency exchange product.  The eurodollar futures market is the largest and most liquid futures market, which banks use to trade between themselves (and with others) in order to offset their deposit or loan risks.

The message of these COT Report data got squelched by the Fed’s Zero Interest Rate Policy (ZIRP) from 2009 to 2015.  It is being allowed to work again now that Ben Bernanke is gone, and the Fed is trying to normalize its policy.  It foretold the rise in short term interest rates which was finally allowed to commence in 2015.  The peak in short term rates earlier in 2019 was right on schedule, echoing the peak in these COT data 10 months earlier.

The most recent data show that the commercial traders have been aggressively switching from a once-big net long position to now being net short, and that foretells a corresponding downward move for short term interest rates in the months ahead.  Even if the commercial traders were to reverse course right now and go back to being net long, we would still have to wait through the echo of that drop over the past few months to work its way through the system 10 months from now.  In other words, short term rates are going to be falling, whether the FOMC members know it or not, and they should continue to fall for at least the next 10 months irrespective of what the FOMC does with its target rate.

James Turk – Gold & Silver Pullback Not Surprising But Look At This Shocking Chart!