After the spectacular surge in the price of silver, today SentimenTrader issued a new update on the war that is raging in the silver market.

From SentimenTrader:  “Optimism on silver has climbed to a nearly 2-year high.  Over the past five years, when silver’s Optimism Index was 65 or higher, it showed a negative return over the next 40 days on 81 out of 82 days that it occurred (see chart below). 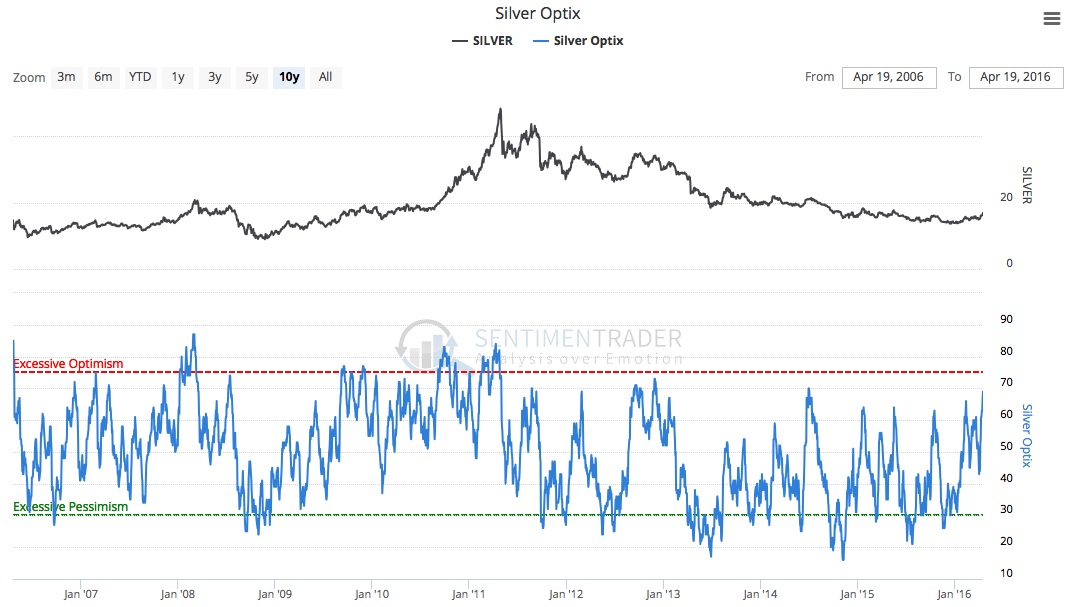 The longest it (silver) continued to rally after showing such optimism was 11 more days in September 2012.  Its maximum gain at its best point over the next two months averaged +2% versus an average decline at its worst point of -10.8%.

We keep looking for evidence of ‘this time is different,’ and there have been some signs of that over the past few months.  If it (silver) can show a positive risk/reward in the coming weeks, then we can add one more sign that its long-term bear market has ended.”

King World News note:  Jason Goepfert from SentimenTrader continues to look for a new behavioral pattern for the silver market to indicate a new bull market has begun.  What he is saying above is that if silver can trade higher in the coming weeks, it would be one more indication that the bull market for silver has started.  With the commercials heavily short, it will be very interesting to watch the war in the silver market unfold in the coming weeks and months.

To try a free 14-day trial of the internationally acclaimed work that Jason Goepfert produces at SentimenTrader simply CLICK HERE.