Today one of the biggest danger signals is now flashing RED!

DANGER – From Investors Intelligence:  Indexes resumed their rallies last week, finishing Friday with new records for the S&P 500 and Nasdaq Comp. Despite some expressions of wariness that latest buying shifted more editors to a positive outlook. Don't fight the tape and the Fed are old Wall Street sayings first expressed by an old friend Marty Zweig. Sentiment optimism jumped, ending close to levels shown at a major stock market top.

The new market highs inspired a large jump for the bulls to 57.4%. That was up from 52.5% and 50.5% over the prior two weeks, just below the readings that ended Feb when indexes also set records. Bulls above 50% show elevated risk and that has persisted since Nov-14 with only a few weeks of exceptions. Bullishness at the +60% level points to near fully invested outlooks and major tops. Sentiment is a leading indicator and in Jun-14 the bulls hit 62.6%. The market first edged higher after that but then fell sharply early fall, ending with a bottom in Oct 2014. By then the bulls had tumbled to 35.3%. That signaled lower risk buying conditions. 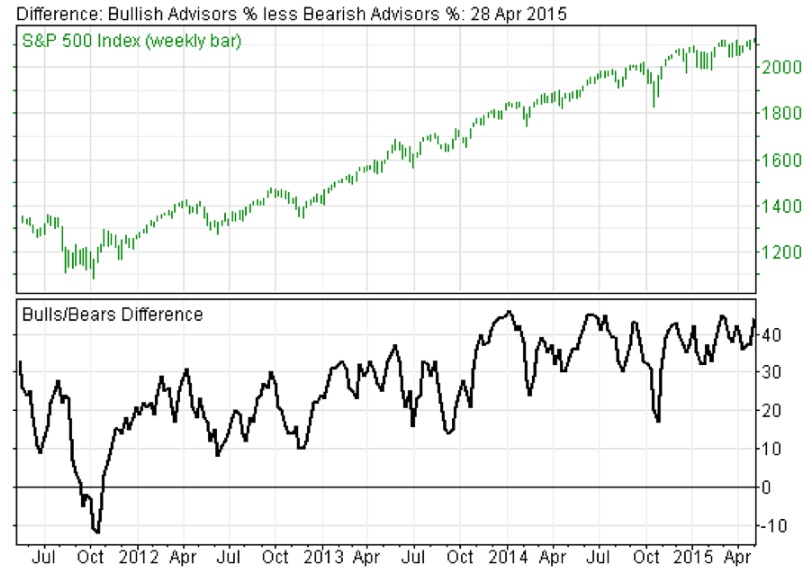 There was a small contraction for the bears at 13.9%. That is from 15.2% a week ago and equals the 2015 low for the bears just before that. Again the bears show the same depressed reading that ended Nov-14. This is a lonely outlook held mostly by cycle followers. The upcoming seasonality shift (sell in May and go away) hasn't yet convinced many advisors to shift their outlook.

The spread between the bulls and bears increased to 43.5%, up from 37.3%. That ends three weeks below 40% and again a dangerous difference in danger territory last seen late Feb. The spread was then 45.4% before stocks sold off. Differences over 30% are a worry and above 40% signal major caution. Bears haven't outnumbered bulls (a negative spread) since Oct-2011. ***IMPORTANT – To subscribe to Investors Intelligence CLICK HERE.

***ALSO RELEASED: Ray Dalio And The Key To Making Money In These Crazy Markets CLICK HERE.