Still in the early days of trading at the start of 2019, we are on the edge of something historic and gold, silver and the mining shares are the place to be.

Gold & Silver Higher For The Last Three Years
February 4 (King World News) –  Here is a portion of a note sent to KWN from Lundeen:  The fears I recommend my readers should ignore are those having to do with gold and silver collapsing from their current levels.  That’s not to say that they can’t go down from the close of this week; they could.  But their lows of December 2015 are rock bottom.  For the past three years the path of least resistance for gold and silver has been upward, and except for brief market corrections will continue to be for years to come…

Here’s a metric James Turk once used, and I’ve kept track of it since: the BGMI / $ Price of gold.  As Mr. Turk noted, in terms of the price of gold, gold mining shares haven’t been this cheap since the early 1930s.  Maybe someone else is also watching this.  This week I noted the BGMI was up 10% since last Friday’s close.

Shares Of Gold Mining Companies Cheapest Since The 1930s 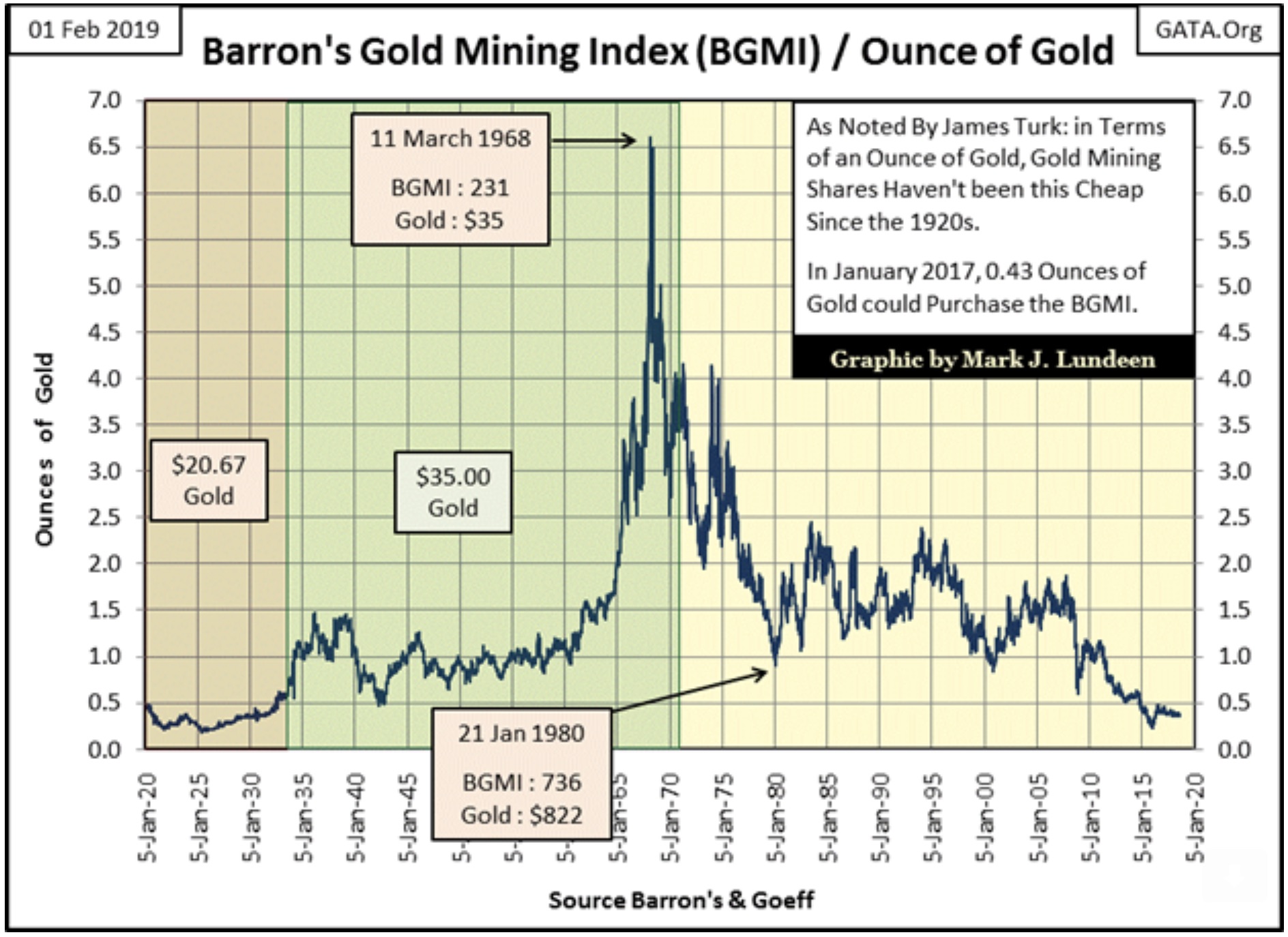 But just because something is cheap doesn’t mean it’s a bargain.  Still, whenever I think of history’s greatest investment opportunities they were all widely shunned bargains at the beginning; pre WWII real estate in Hawaii and California, or blue-chip stocks in July 1932 and again in April 1942.  Who wanted to buy shares in war ravaged Japanese or German companies?   In the mid-1960s John Templeton did, becoming a billionaire several times over in the following decades.

Here’s gold’s BEV chart, which is looking darn good.  We see the December 2015 hard bottom; we’ll never see gold selling at that price ever again.  Then for the next two years gold stayed about the rising trend line, making it a line of support.  Then last summer gold broke below that line of support, making it now a line of resistance.  But in the last couple of weeks gold broke above that line of resistance, and now has it eyes on its BEV -27.5% line ($1,360). 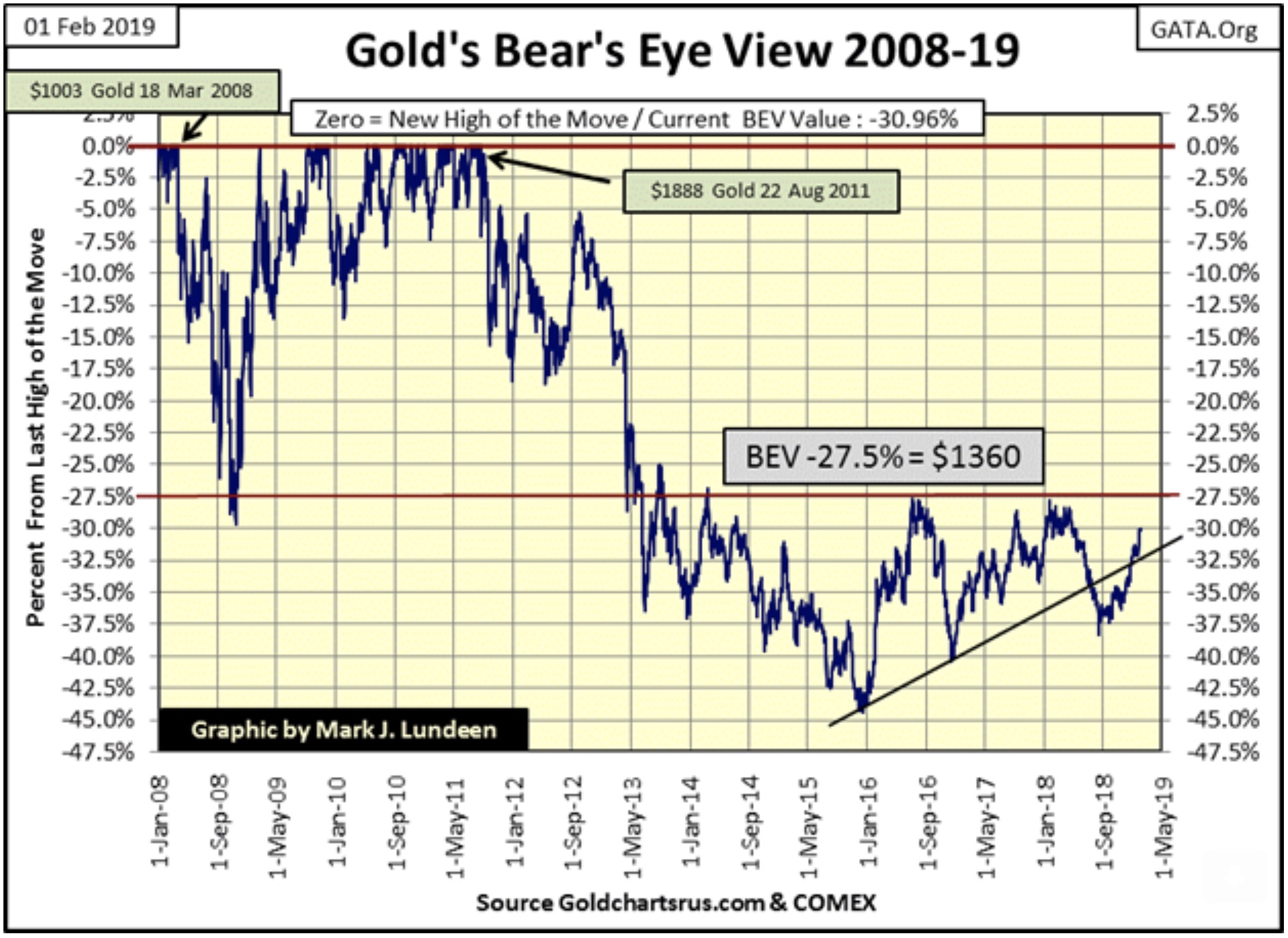 Will gold take out its -27.5% BEV line?  I’m thinking it will.  For one thing since December 2015 the US national debt has increased by more than $3 trillion dollars and the congress promises to add another trillion to the national debt this year.  Also, real estate prices have become as ridiculous as they were in 2007&08.  Need I say the “policy makers” have inflated another 8,000 points in the Dow Jones?  There’s more, and though most investors are unaware of these factors, and if told wouldn’t care as long as the stock market continues to advance, but  one of these days they will.

As bad as that will prove to be for stock market valuations, it will be the rocket fuel needed to ignite a resumption in the market advance in gold and silver.

***Also just released: Greyerz Questions Whether The US Has Any Gold Left Ahead Of Global Financial Collapse And Monetary Reset CLICK HERE TO READ.