Premiums On Comex Spike Higher…Again
May 8 (King World News) – Alasdair Macleod:  Gold and silver rose on the week, with gold up $21 from last Friday’s close at $1721 in morning European trade today and silver up 70 cents over the same timescale at $15.48. For gold and silver, the week started on a subdued note after the previous week’s fall, before picking up strongly yesterday (Thursday). 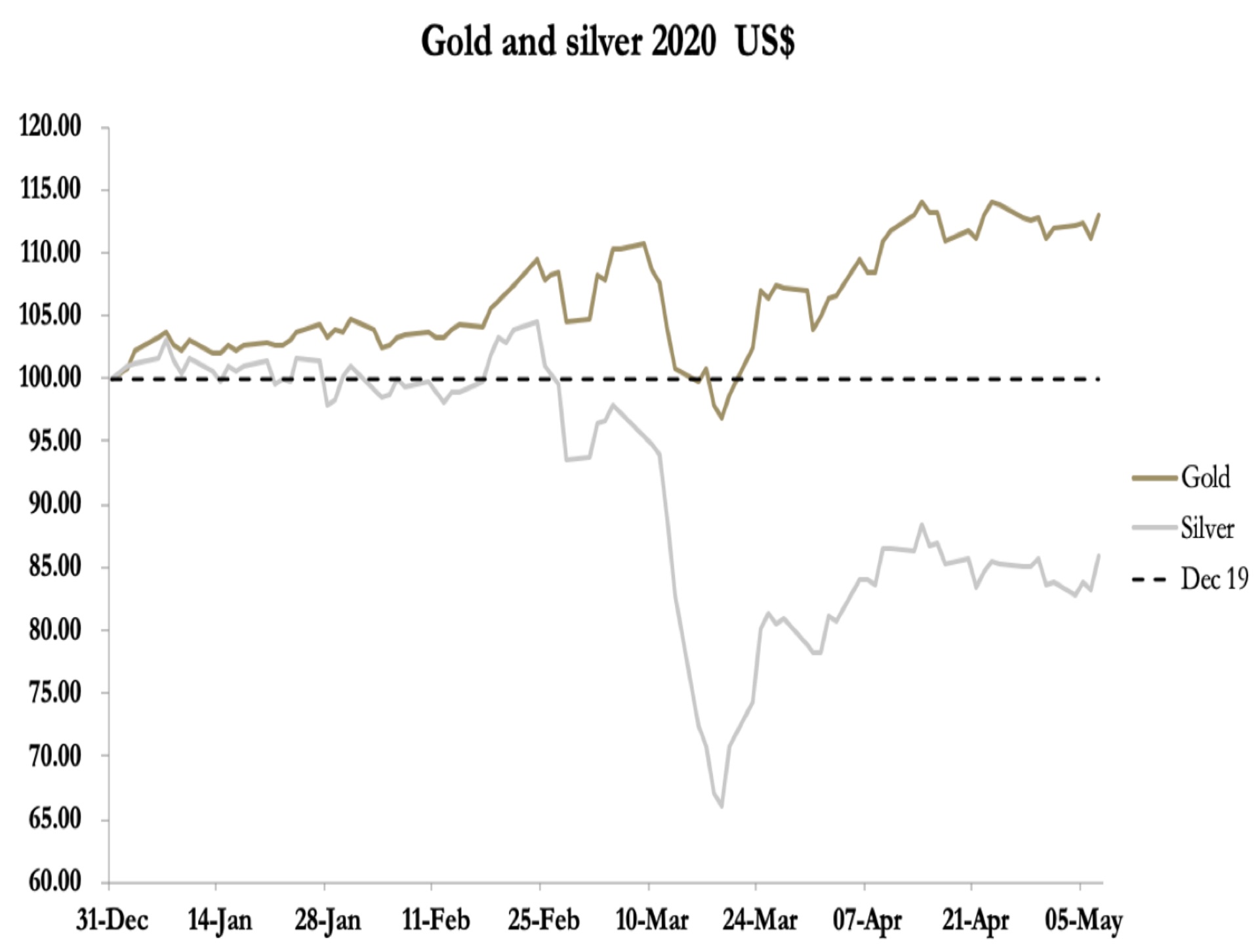 Silver was sharply higher, open interest having fallen to a very low 132,725 contracts. Preliminary figures for yesterday show an increase of 4,357 contracts, which for silver is a bullish increase. The position is shown in our next chart. 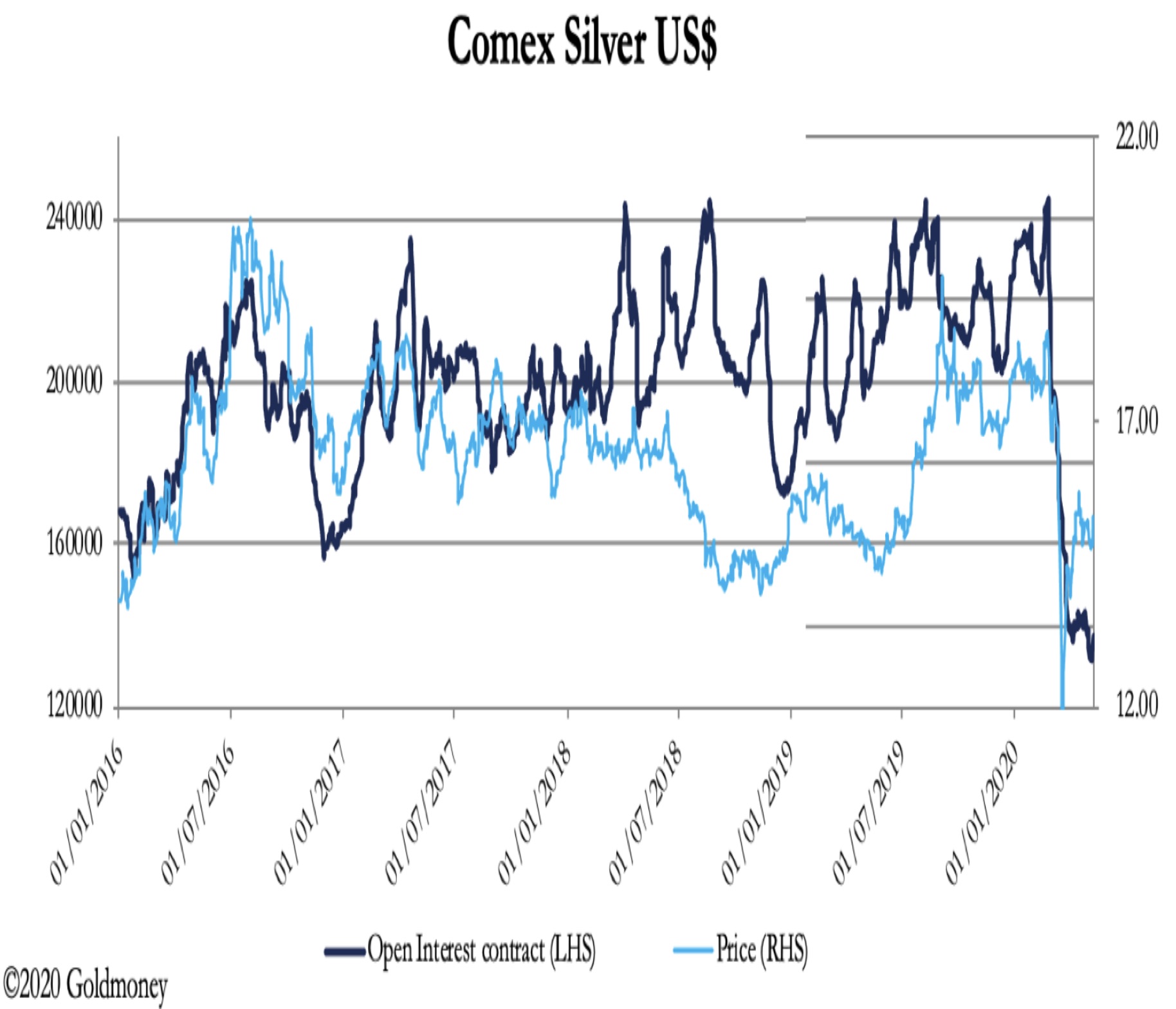 The contraction of open interest recently has been unprecedented, and the accompanying fall in the silver price tells us that weak holders have been eliminated. The pickup in open interest yesterday and the strong rally in the price are a signal for a decent rally. Importantly, the swap dealers (bullion bank trading desks) have closed their shorts, shown in the next chart. 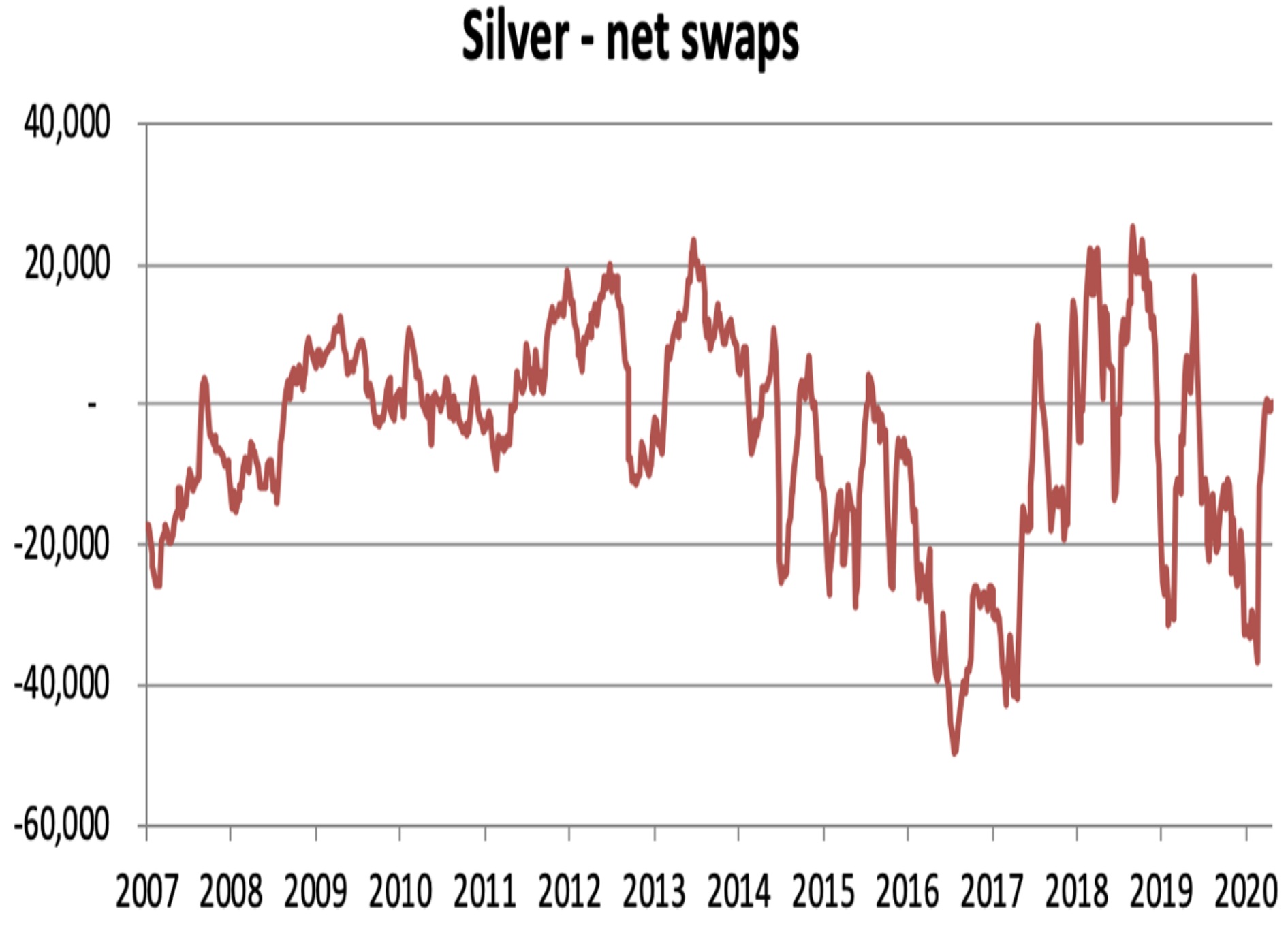 The commitment of traders’ figures, from which this chart is derived, were last updated for 28 April, since when there was a further sell-off. Therefore, updated figures tonight for 5 May should show swaps are net long.

The current sharp rally tells us the swaps will not want to go short and would rather mark prices higher to deter buyers.

Earlier in the week both gold and silver saw a decline in the premiums for their active Comex contracts over London spot to as little as $2 for gold and a few cents for silver. But this morning Comex premiums began to increase again, roughly $10 on gold, and 30 cents for silver. It appears another short squeeze is in the offing.

The position in gold is different from that of silver, with the swaps still dangerously short, as the next chart illustrates. 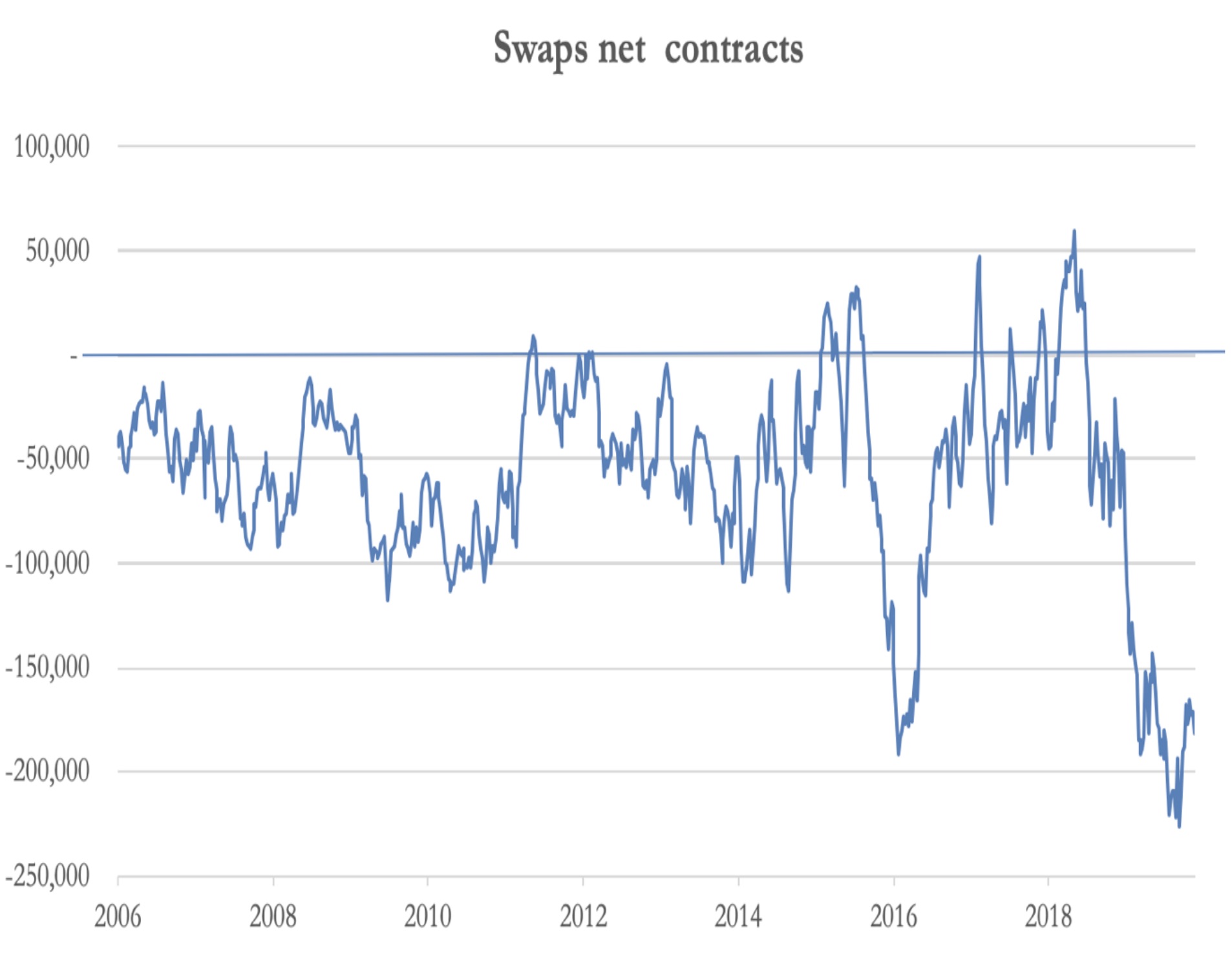 From here on, a further rise in the price of gold will be potentially catastrophic for some swaps, and the problem is replicated in the largest four traders’ positions, suggesting one or perhaps two of them have been badly caught. The next four largest have managed to reduce their shorts in line with the general fall in open interest, so an increase of net shorts in the large four is an aberration. This is our next chart.

What Do They Know? 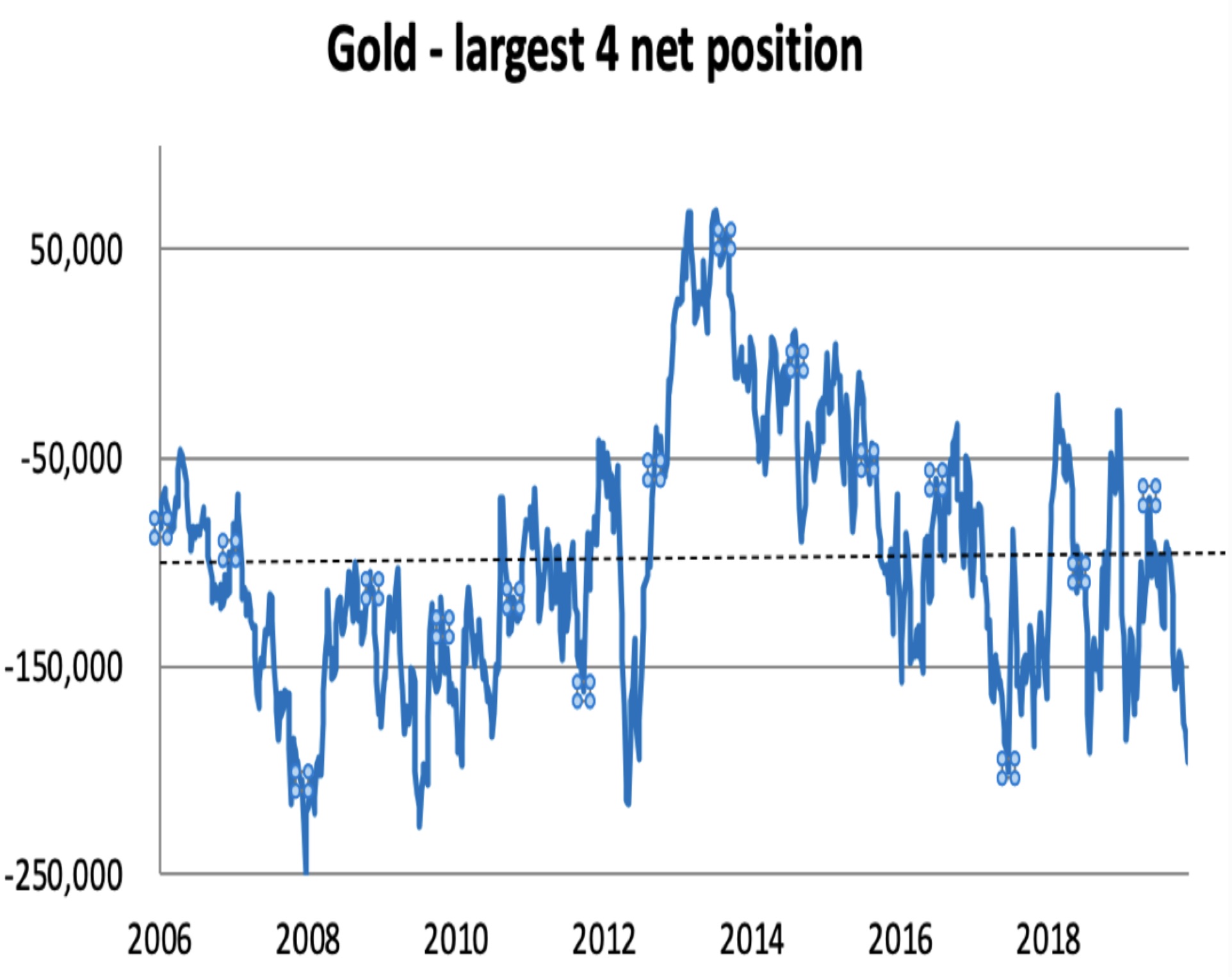 Putting all the evidence together, both gold and silver appear set to rise over the course of this month.

In other news, markets still don’t really know what to make of the situation. US Treasury yields remain very low, with increasing talk of negative interest rates. Whether this happens will probably depend on the banks and their input to the Fed. Negative rates have done nothing for the EU and Japan, and amount to a tax on the banks, making it unlikely the commercial banks will support the Fed in such a move.

The ECB has run into trouble with Germany’s Constitutional Court ruling the ECB overstepped its powers in buying government debt. This is a problem, restricting the ECB’s inflationary activities, potentially triggering a new funding crisis in Greece and Italy.