August 30 (King World News) – Eric Basmajian at EPB Macro Research:  Volumes in the housing market are imploding. New home sales are -51% from 2 years ago. So, is this as bad as 2008 or not? 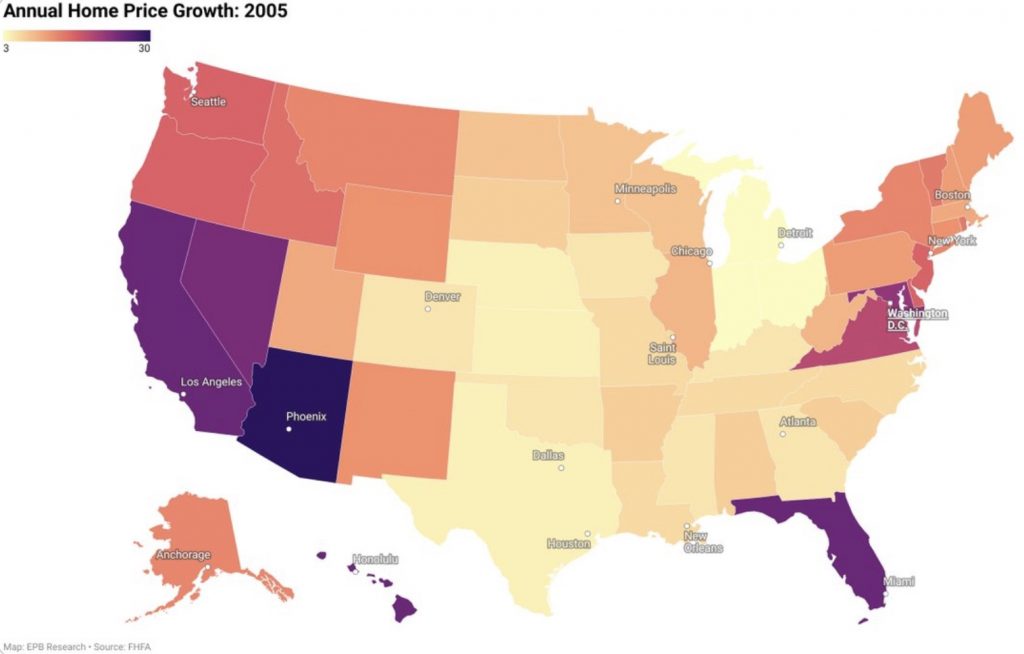 This is a map of home price growth at the peak of today’s housing bubble in 2021. 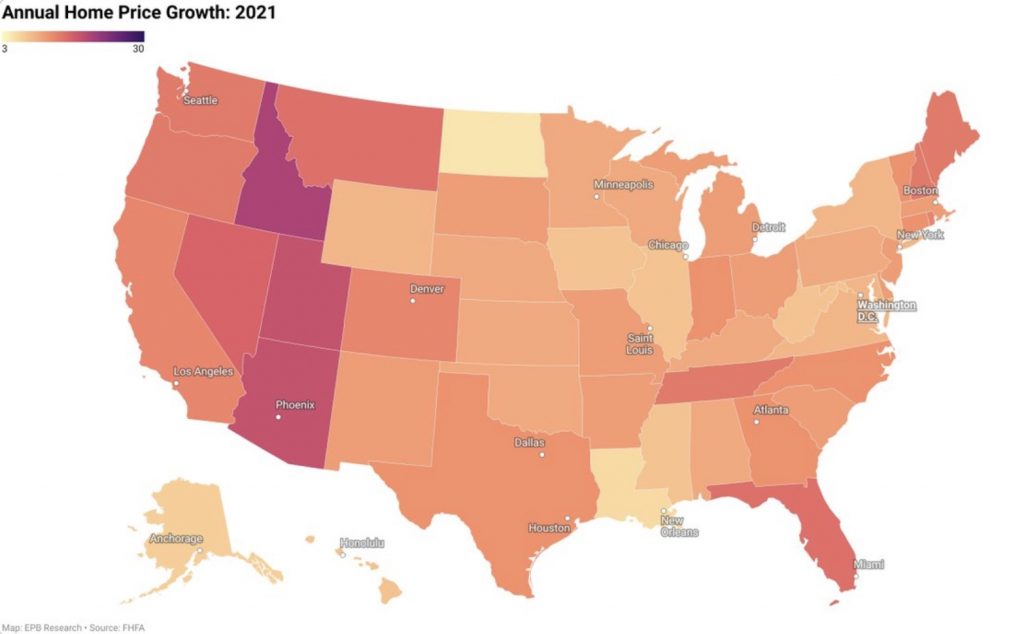 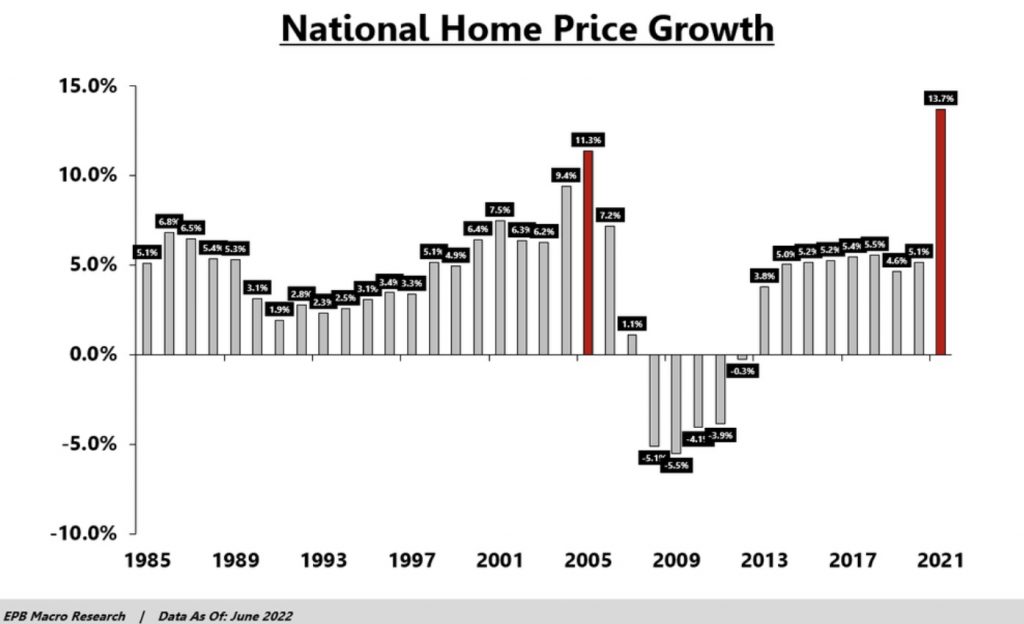 So national home price growth today is MORE extreme than in 2005 and 2006. The concentrated bubbles in 2005 were larger, but today it’s so broad-based. Does that mean it will be worse than the 2008 debacle? Let’s scan just a few data points. 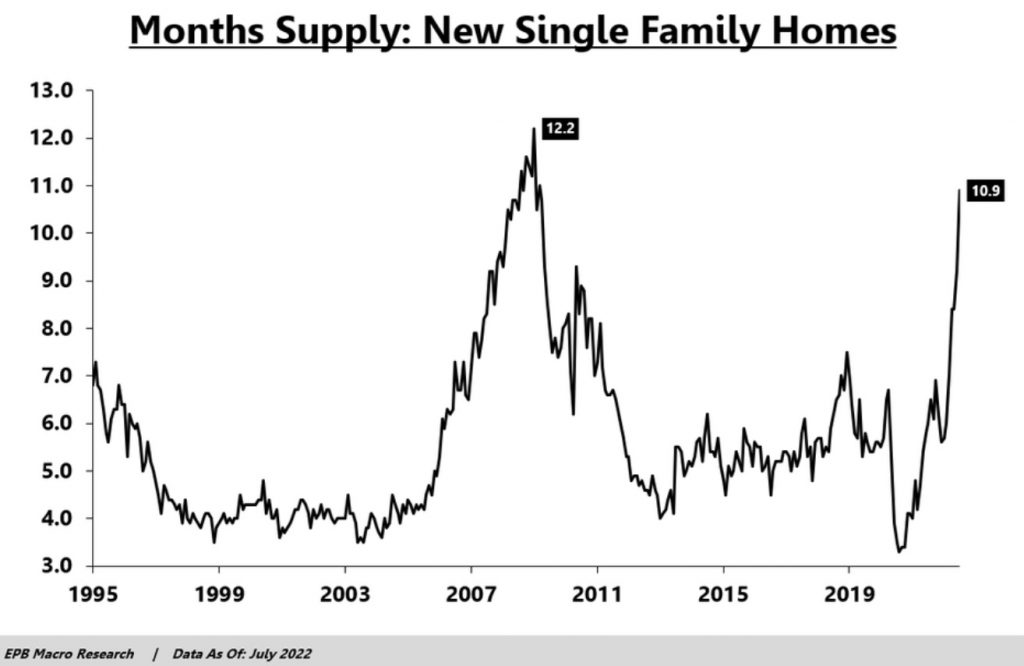 Yes, I know that many of these homes are not “completed,” but that doesn’t matter at all. The total number is the leading indicator. Also, we’re more concerned about the inventory of new homes vs. existing homes because all the economic activity & jobs are tied to new homes. 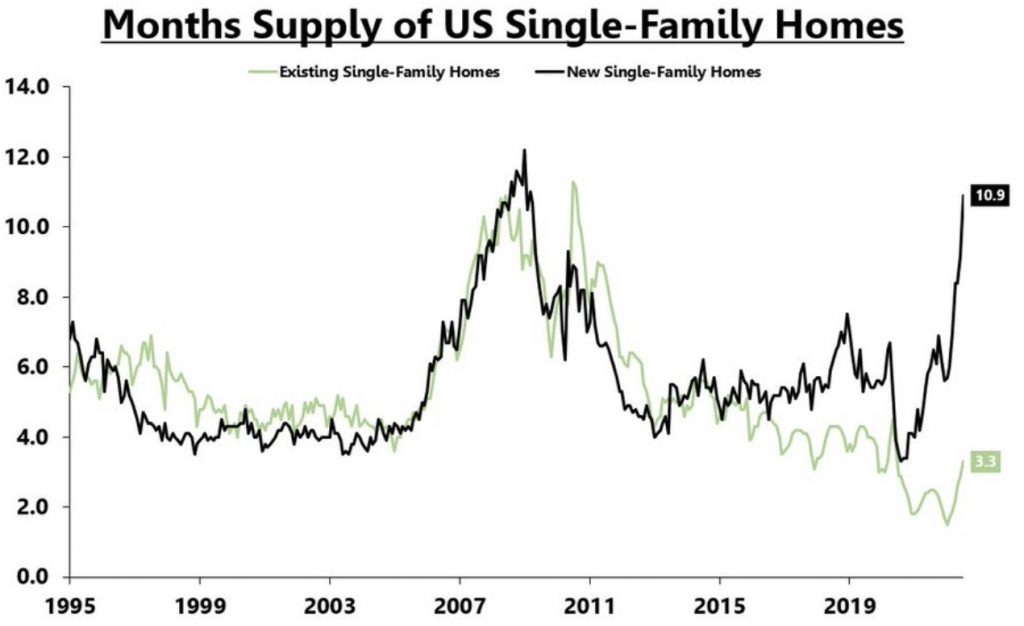 In 2008, the months supply figure exploded to 12.2, so it’s not quite as bad yet, although it could get there. Sales volume is completely collapsing today and there are no signs of a slowdown in the pace of decline. The volume of new home sales is down 51% since Aug 2020.

It’s worth noting that in 2008 sales declined 70% AFTER the recession started and AFTER numerous credit events. We’re down 51% so far with no job losses and no credit events. Food for thought. 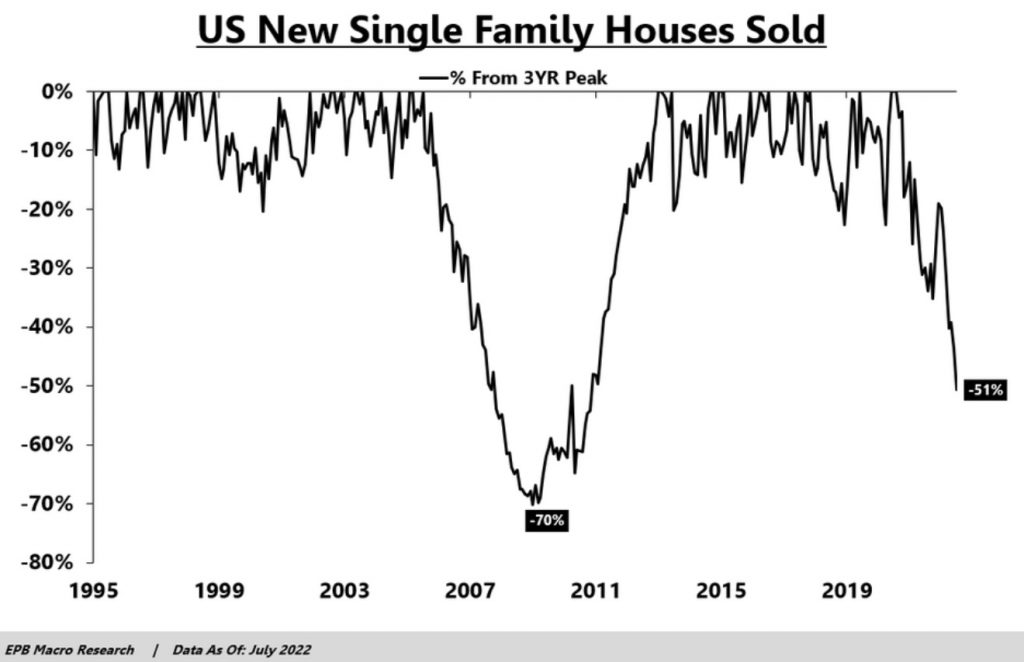 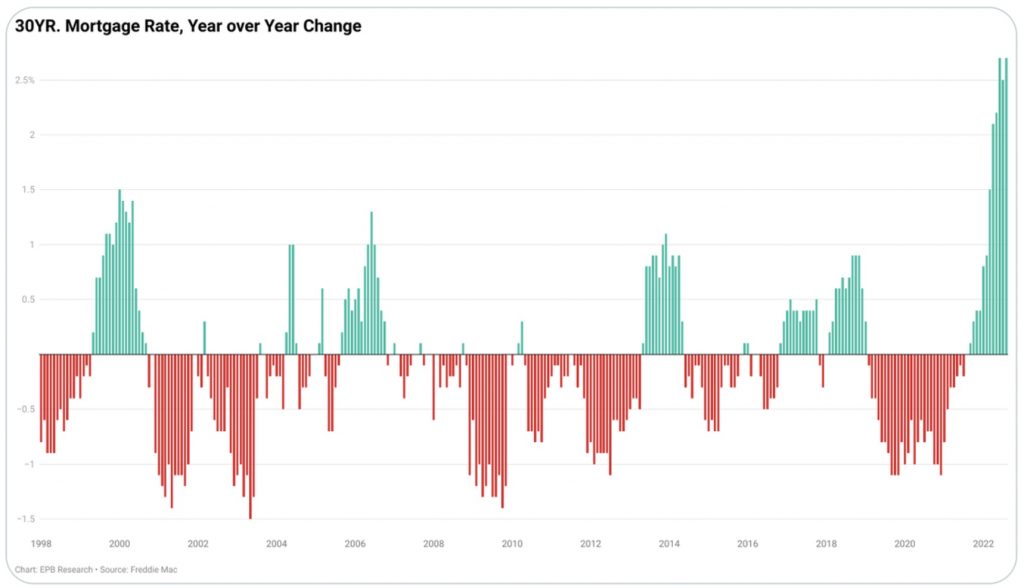 In the lead-up to the peak in the housing bubble in 2006, liquidity growth was NOT excessive. The bubble in 2006 and the crash in 2008 were more about a debt crisis and cheap credit.

Real money growth in 2020/2021 was more than six times as high as it was in the mid-2000s, which is why the housing bubble this time is more broad-based rather than concentrated in select cities as it was in 2005 and 2006. 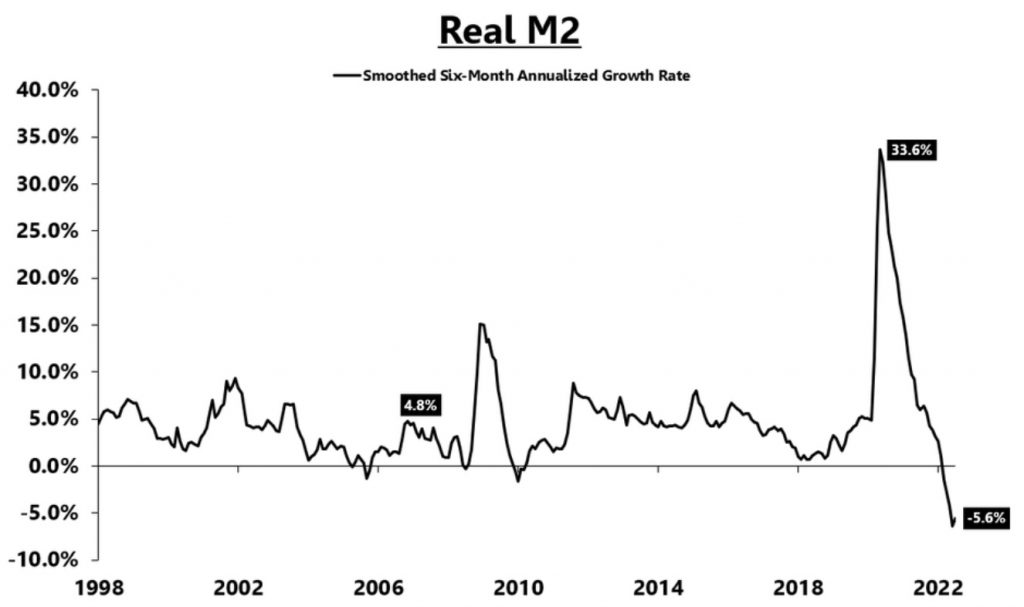 Today’s bubble is more about record liquidity growth that was channeled into financial assets vs. bad loans and underwriting standards.

When big institutions started to access the single-family home market, housing became just another financial asset that was an easy recipient of this excess liquidity that historically stayed trapped in the stock market.

Real money growth never contracted or slowed below 0% when the 2006 housing bubble popped, not until mid-2008. Today, liquidity is falling sharply as the Fed pulls money out of the system to correct an ongoing inflation problem.

So just as easily as home prices went up because of liquidity, we may see the reverse. So the inventory issue is not quite as bad as in 2008, which is a good thing, but the spike in mortgage rates is way worse, and the contraction in liquidity growth is more intense.

The debt bubble was worse in 2008 because the debt was concentrated in the banking sector and the household sector in the form of mortgages. Together, the household and financial sectors had almost 220% debt to GDP compared to 150% today. 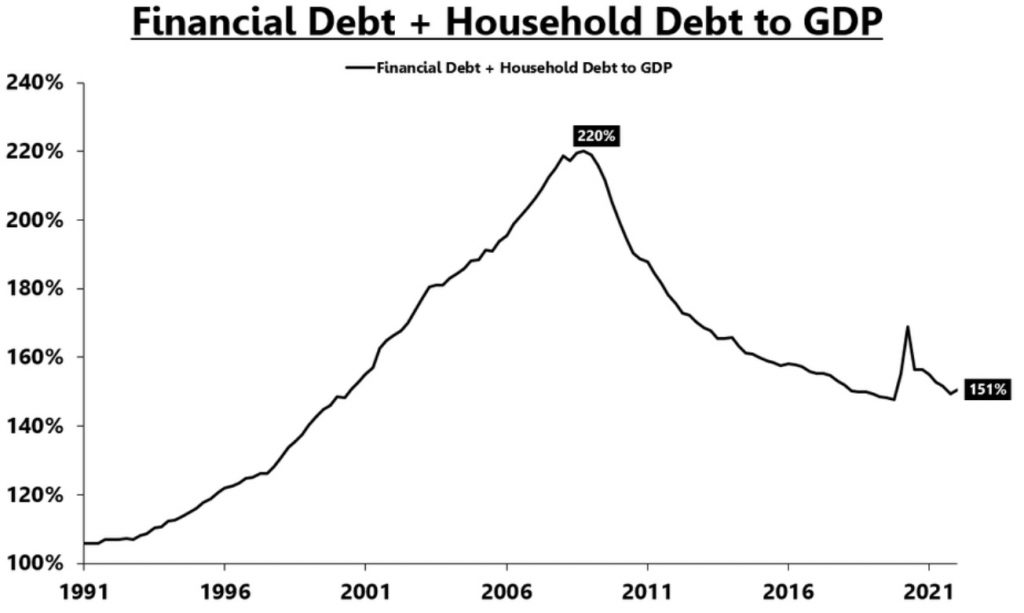 The 2008 crisis started as a housing problem, but it morphed into a banking crisis. Today, we have housing data that, by most metrics, is on pace to be similar to 2008, but we don’t have the private sector debt toxicity to turn the housing downturn into a banking meltdown.

Today we have a bigger debt problem in the Federal Government, and the household debt is concentrated in what we call consumer debt, mainly student loans and auto loans, not so much mortgage debt. 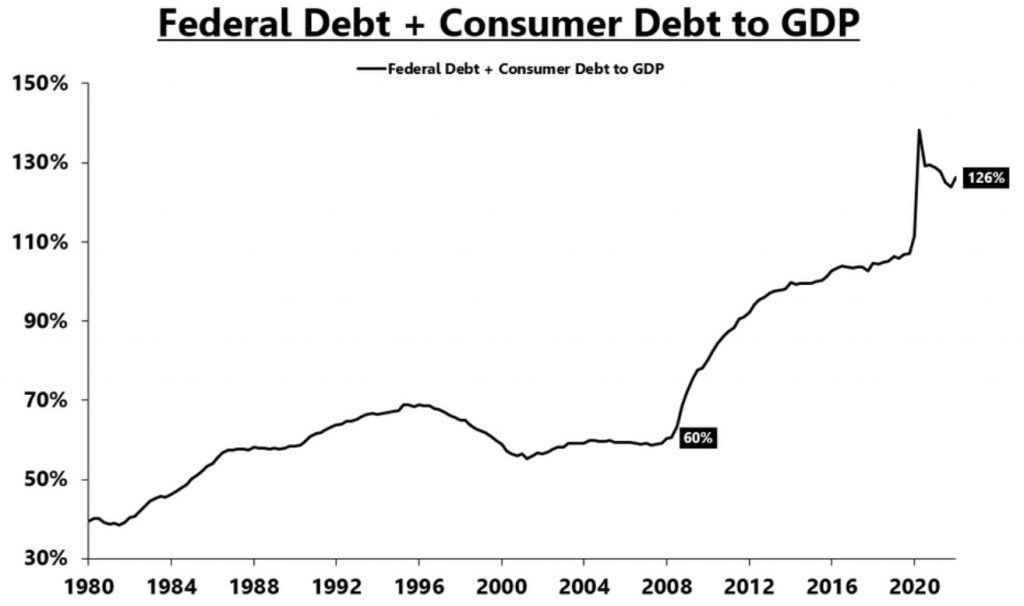 The 2022 housing crash certainly has the potential to be worse than 2008 if we’re talking about the housing market itself. Months supply, sales volumes, a spike in mortgage rates, contractions in liquidity, etc.

Housing volumes are extremely important for the business cycle and a leading indicator of recession risk. New home volumes down 51% foreshadow trouble no matter how you look at it.

There are more factors as well, like demographics, but that’s for another thread and another day. 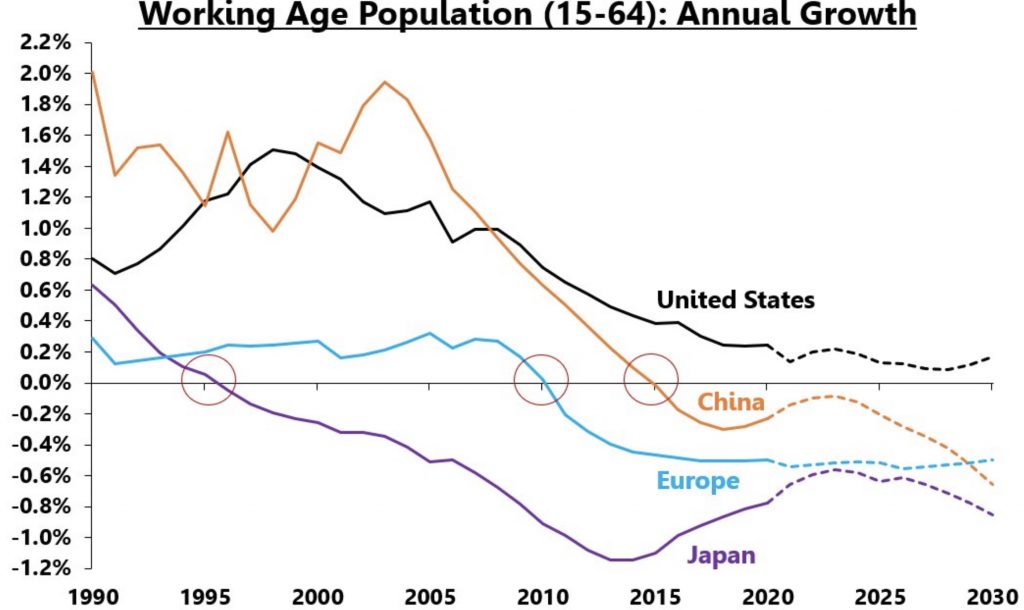 There’s much less of a chance that this housing downturn morphs into a global banking crisis. But I’m still highly concerned about recession risk given the magnitude of this housing slowdown. I’m not sure it can be avoided at this point.