Stagflation will have a huge impact on stocks, gold and silver, plus a look at some global surprises.

Stagflation Heavily Impacts Stocks, Gold & Silver
September 8 (King World News) – Fred Hickey:  Starting to hear the “S” word (stagflation) More and more. “The mounting concern now is of a toxic mixture of weak demand and accelerating prices.” Typically occurs when central banks create too much money (inflation) and bad government policies screw up the economy. Historically, stocks and bonds do poorly in stagflationary periods. Precious metals (gold & silver) perform best followed by commodities (especially oil). And it just so happens that stocks and bonds are epically overvalued and over-owned, while metals and commodities are not. Your choice…

To Taper Or Not To Taper This Year
Peter Boockvar:  With the next FOMC statement and press conference two weeks from now, today’s economic outlook speech from the NY Fed head and part of the Fed troika of importance John Williams would be a perfect opportunity to lay the groundwork on what we should expect because not much news will take place from now until then. Does Williams think Friday’s payroll miss was mostly in response to Delta or due to the lack of workers? Non voting member Jim Bullard still believes more in the latter according to his comments in the FT today. “There is plenty of demand for workers and there are more job openings than there are unemployed workers. If we can get the workers matched up and bring the pandemic under better control, it certainly looks like we’ll have a very strong labor market going into next year.” He repeated his worry about the “incipient housing bubble.” What’s his bottom line, “The big picture is that the taper will get going this year and will end sometime by the 1st half of next year.”

ECB: Expect More Inflation
We hear from the ECB tomorrow and ahead of that we got comments from two members today with one hawkish and one more dovish. Echoing what he said last week, Robert Holzmann said “There is the possibility that we may be able to normalize monetary policy sooner than most financial market experts expect.” According to Reuters he “saw potential upward price pressures from persisting global supply bottlenecks, labor shortages, pent up household demand, the cost effects of climate change policies, and higher headline inflation getting entrenched into expectations.”

On the other hand, Governing Council member Bostjan Vasle said:

“Recovery is underway, but new waves of the pandemic may slow it down, and we expect inflation to return below the 2% target after a temporary rise…For now, the indication is that the benefits of a highly accommodative stance, supported by unconventional measures, outweigh the cost but that going forward vigilance is warranted.”

European bonds are slightly higher after two days of selling but the euro is lower for a 3rd day. While the Fed has a tough job ahead, the ECB’s is even more difficult with the large amount of negative yielding bonds in the region and the massive bubble in bond prices they’ve created.

Real Estate
There was no change in the average 30 yr mortgage rate w/o/w at 3.03%. Purchases were basically flat, down .2% but are down 18.1% y/o/y on tough comps and for other reasons like inventory and that prices are up almost 20%. Refi’s fell by 2.8% and are down for the 3rd week in the past 4. They are also down 3.6% y/o/y. If one hasn’t refinanced yet, what can they possibly be waiting for?

The only thing of note overseas was the Japan Economy Watchers survey which fell sharply m/o/m but this you can blame on Delta because of the specific restrictions put in place in response. This index fell to 34.7 from 48.4 and that is the lowest since January. 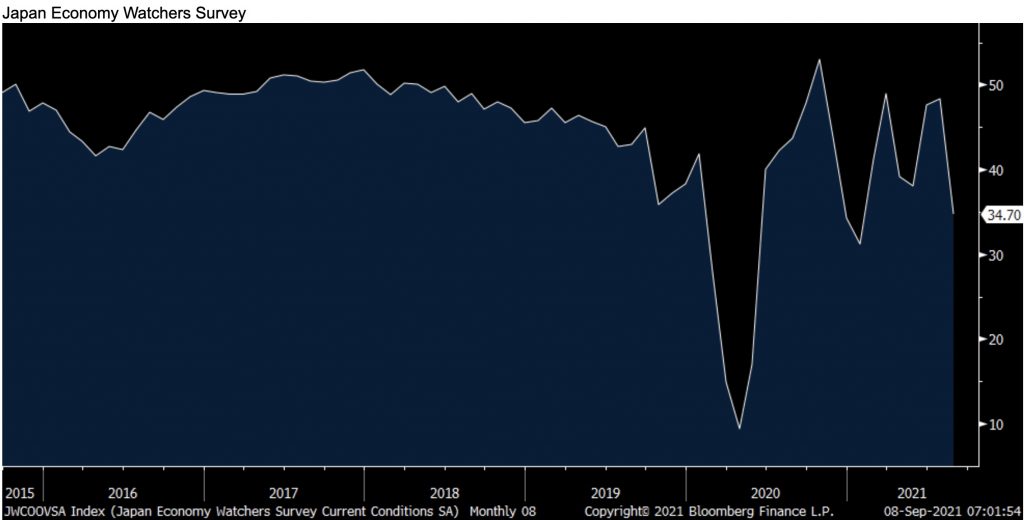 The outlook though only fell slightly. As the number is not market moving and we directly know the reason for the miss, Japanese markets didn’t respond. The 10 yr yield was little changed overnight as is the yen and the Nikkei rallied again to above 30,000 for the 1st time since April.

Nikkei Rallies Above 30,000 For First Time Since April 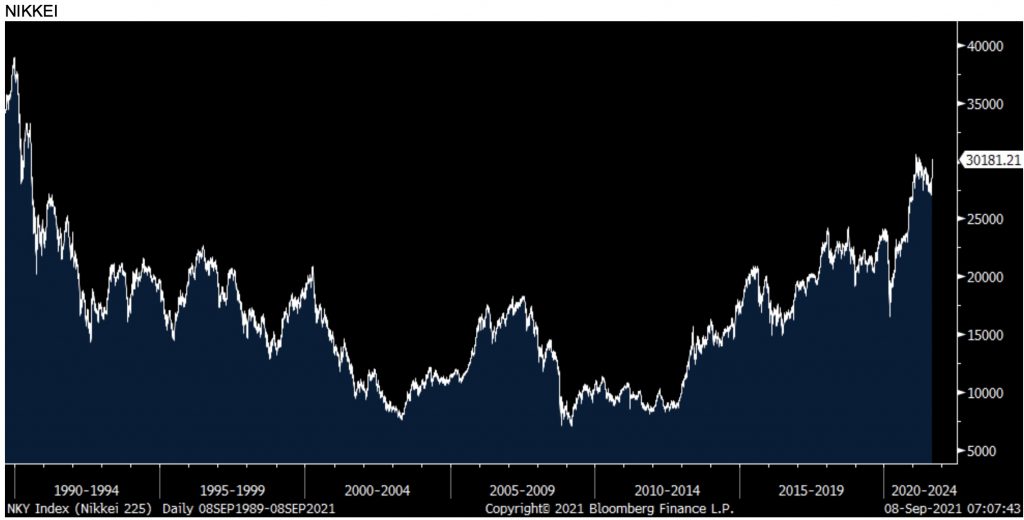 The Nikkei is trading at a still attractive 18x 2021 expected earnings and 17x next year’s. We are seeing an uptick again in Japan’s inflation breakevens as the 10 yr is at the highest since early July, although still at a very low .22%. 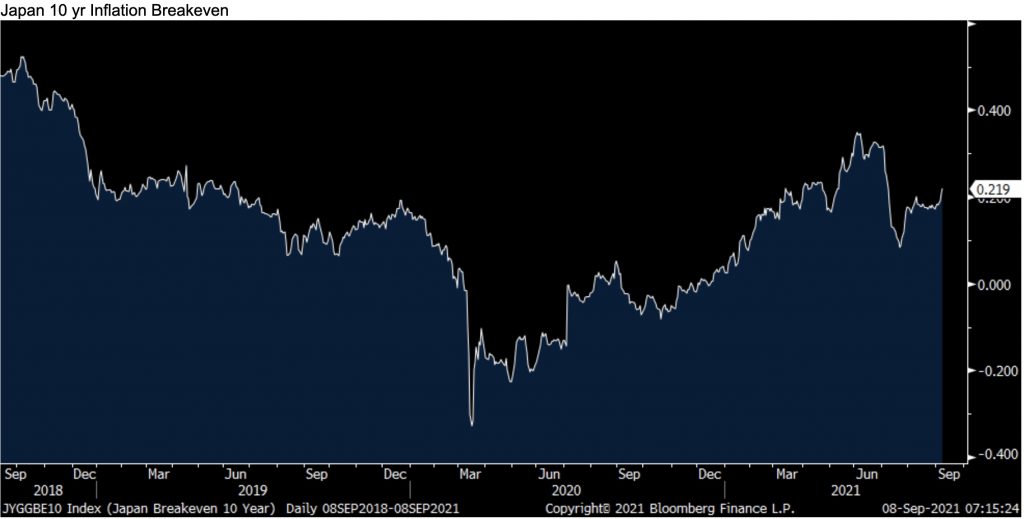