As we kickoff another trading week, here is a look at money destruction, QE taper and what to expect next.

QE Taper
Peter Boockvar:  I’ve kept making the case that the reason why the yield curve is flattening is because of the market pricing in Fed tightening as the QE taper is now upon us (however the speed). This is because there is no such thing anymore of a ‘soft landing’ when the Fed tries to normalize policy as because the economy and markets are so dependent on Fed policy and intertwined, it’s impossible to separate them out unfortunately. As I’ve also said before, we no longer have regular economic cycles and instead have credit cycles that ebbs and flows with the cost of capital driven by Fed policy.

So the more formal restructuring of Evergrande now begins and in an attempt to smooth out any financial disruptions the PBOC announced a 50 bps cut in its reserve requirement to 11.5%. Not that they want this to encourage banks to broadly lend more but to give them more flexibility to deal with any residential real estate fall out. Evergrande’s stock fell 20% in Hong Kong. The Hang Seng was weak again because of another decline in tech while the Shanghai comp was lower by .5%. The offshore yuan is little changed. In direct response to the RRR cut, the 10 yr China yield fell almost 4 bps to 2.86%. Copper, sensitive to China construction, but becoming less so, is up .9% to a one week high.

The bottom line with what is going on with the real estate sector in China is that it will slow overall growth and why the 30%+ savings rate of Chinese households is an important buffer. We’ll see more debt restructurings and those builders who were more conservative in their business plans will likely benefit from the demise of their competitors…

German factory orders in October tanked by 6.9% m/o/m, well worse than the estimate of down just .3%. An 18.1% drop in non eurozone orders was the main reason. Because of the reliance on smoothly working supply chains, German industry has gotten all backed up, particularly with their auto production sector. While the estimate for this number was badly off, it is not a surprise that supply problems are resulting in order issues and why the German 10 yr bund yield is little changed. The 10 yr breakeven is down 1 bp and the euro is slightly lower. The DAX though is up about 1/3 of a percent. 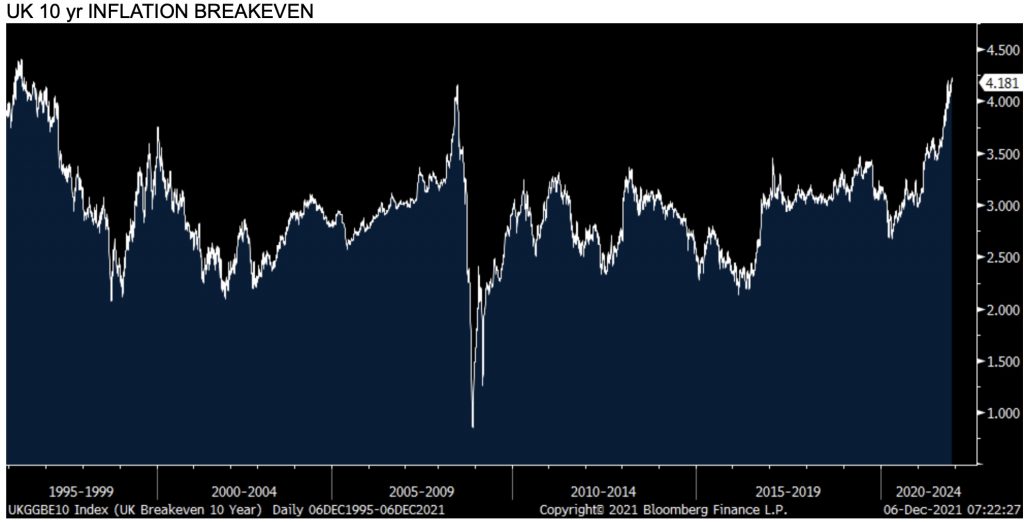 Either way, QE ends completely next week so the BoE is a step ahead of others and will join the Bank of Canada in their hard stop.

CAUTION: This Rising Inflation Can Easily Turn Into Hyperinflation