Look At What Is Happening In The Silver And Copper Markets

With the gold market hovering near $1,700, look at what is happening in the silver and copper markets.

Silver & Copper
May 12 (King World News) – Ole Hansen, Head of Commodity Strategy at Saxo Bank:  Industrial metals such as copper started the week on a firm footing, reaching a seven-week high, before retracing lower. Just like crude oil and growth and dependent commodities it has now established an uptrend with rising prices as easing lock-downs support a pickup in demand. Adding to this multiple initiatives from governments and central banks have all helped improved the sentiment among growth dependent commodities. This despite facing the biggest slump in global growth and rise in unemployment since the great depression…

Also supporting metals are reports from China that commodity traders are hoarding tangible assets such as metals. Last week the war of words or COVID-16 blame game between the U.S. and China temporarily saw the off-shore Chinese Renminbi (Yuan) spike to 7.15 before easing to the current 7.10 level. Whether the hoarding is driven by speculation about a weaker currency or other economic developments remains unclear. This emerging behavior has to a certain extent been supported by the recent price action which has seen demand for some metals being stronger during Asian trading hours.

HG Copper reached an eight-week high on Monday at $2.43/lb before running out of steam. News from China remains encouraging with PBOC promising to do more to support the economy together with a recent drop in inventories monitored by the Shanghai Futures Exchange. The outlook however in our opinion remains one of caution. Rising supply from the reopening of virus hit mining operations raising the question whether the pickup in demand, especially from Chinese manufacturers will be enough to avoid a build in surplus stocks this year. 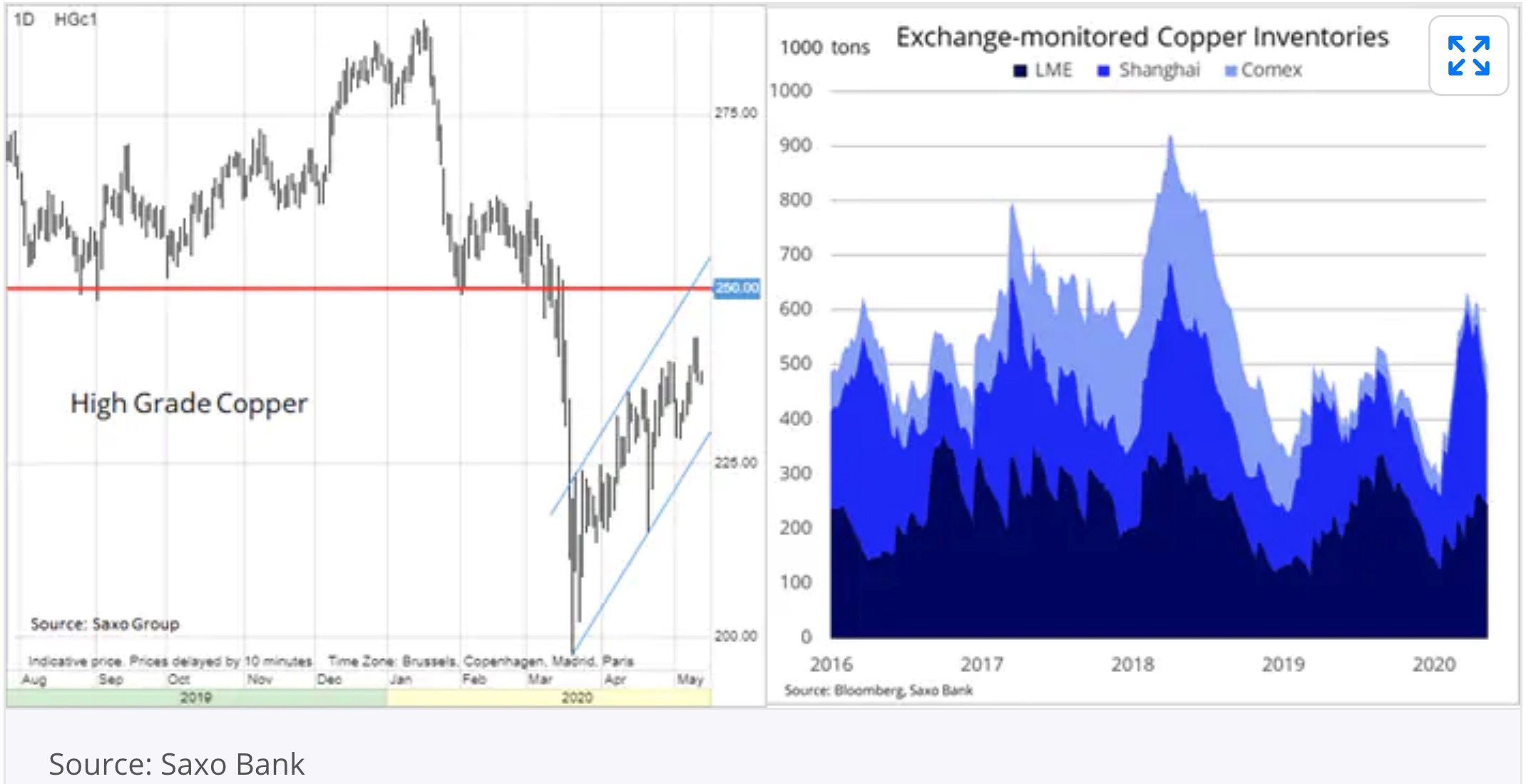 With this in mind we remain skeptical that HG Copper will be able to mount a sustained rally above key resistance at $2.50/lb, an area that provided support for three years before the March break and collapse to $2/lb. Hedge funds have held a net-short position since January when the COVID-19 outbreak became known outside of China. Continued strength will attract additional short-covering but with the macro economic outlook being challenged, a sustained technical breakout is required for a long position to emerge.

Copper And Silver Looking Bullish On The COT

Silver
Silver meanwhile has enjoyed the tailwind emerging from the rally among industrial metals. Having reached a historic discount to gold on March 18 at 127 ounces of silver per ounce of gold, the semi-precious metal has since recovered to 110, the lower end of the established range. The technical set-up following last weeks price action looks promising with the gold-silver ratio pointing lower while silver has made an attempt to break a recently established downtrend.

In terms of investment flows there has been a major divergence between tactical trading firms like most Hedge funds and longer term investors, both retail and institutional, using exchange-traded funds back by silver. The Commitments of Traders report covering the week to May 5 showed that hedge funds, spoked by the near 40% collapse from February to mid-March, have now cut bullish bets on silver by 85% since February to an 11-month low. Apart from a small dip in March, ETF investors have been continued buyers of silver ETFs since January. Total holdings have reached a record 21,000 tons.

At this stage it is still too early to conclude that silver has gotten enough momentum to capture some the lost ground, both against the dollar and against gold. For that to happen the metal first needs to break below 109 on the XAUXAG ratio and/or above $16.15/oz on SILVERJUL20, the April high and the 61,8% retracement of the February to March sell-off.

Silver Needs To Surge Above $16.15 To Break Out

Summary:
Industrial metals such as copper started the week on a firm footing, reaching a seven-week high, before retracing lower. Silver meanwhile has followed more or less the same recovery trajectory since hitting a multi-year low in March. We take a closer look at the current drivers impacting both metals and what may lie in store over the coming weeks.