On the heels of another up day in the gold and silver markets, this leg up for gold and mining stocks will be one for the history books.

GDX vs Gold
February 16 (King World News) – Graddhy out of Sweden:  This long standing ratio chart is still tagging blue trend line. The tagging since the blue breakout is the decline since August $GOLD high.

Now we have a very nice bullish engulfing reversal at present.

Next move up is probably one for the history books.

Very Nice Bullish Engulfing Reversal Candle!
Next Move Up Will Be One For The History Books 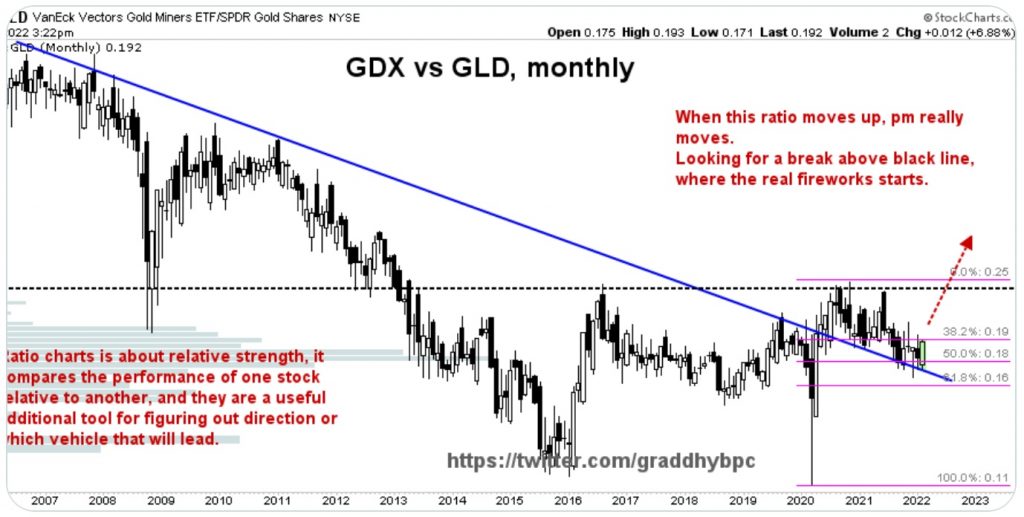 Peter Boockvar:  There was no new information in the minutes from the FOMC meeting of three weeks ago. As the bond market has already priced in a bunch of rate hikes, the real question is now with their balance sheet. When will QT start, how quickly will it go and when will it stop? Either way, we will be entering a period of double tightening…

Based on comments from some Fed members, they seem to think that they can somehow elegantly manipulate the yield curve with QT in that if the curve flattens because of the rise in the short end which in turn slows economic growth, then QT can somehow re-steepen it and maybe back off from rate hikes. I say, easier said than done, especially when the average maturity of the Fed’s balance sheet is only about 6 years and thus they don’t have much in longer term Treasury paper. Also, at the end of QE1, QE2 and as they were tapering QE3, long rates went DOWN, not up. Lastly, it will be really interesting to see how the Fed is going to manage the MBS side of their balance sheet as prepayments are drying up with the rise in mortgage which will force them to sell outright, as said by some Fed members. How smooth will that go?

I will finish with this my belief based on the speeches and comments from Fed members over the past few weeks, that when push comes to shove, they will focus more on economic activity (and implicitly markets too) and less so on inflation when determining how fast or slow to hike and deliver QT. And why for all the tough talk of some about getting aggressive with tightening, it is just in their nature to go slow. But, the end result will still be the same, the Fed will tighten us into a notable slowdown and with lower asset prices, as they always do.

Zacatecas Silver Drills Multiple High Grade Silver Intercepts Near Surface
A New Discovery That Keeps Getting Better
Little was known about Panuco North, which as the name suggests, is north of the main Panuco Vein on Zacatecas Silver’s large silver project in the heart of one of the world’s most prolific silver belts. That changed at the end of 2021 when the company announced a high grade hit grading 2.17m of 823 g/t AgEq in a previously undrilled area at Panuco North.

Today, there are more high-grade hits as the company continues to intersect strong mineralization as it expands the size and scope of this new area.

Not Only are the Hits High-Grade….they are Near Surface
The only thing better than intersecting high grade silver in a drill program like this, is hitting close to surface, and that is exactly what has happened here. Most of the holes were testing the near surface depth extension of Panuco North and intercepts included big numbers such as 1.23m at 750 g/t AgEq and 6.87m at 160 g/t AgEq.

Panuco North Keeps Looking Bigger
Dr. Chris Wilson, Chief Operating Officer and a Director of Zacatecas comments, “The most recent drill holes at Panuco North Vein intercepted robust silver grades over down hole widths of up to 6.87 metres, within 10 to 30 vertical metres of surface. Together with previously reported results, such as 2.17 m at 823 g/t Silver Eq (798 g/t Silver and 0.34 g/t Gold) in Hole PAN 2021-009 as reported on November 23, 2021, drilling by the company in the eastern part of the Panuco North Vein has now intercepted near-surface mineralization over a strike length of 500 m. This part of the vein has never been drill tested. Mineralization remains open at depth and to the northwest over at least 1 km of strike length.”

Already Excellent Numbers Could Get Even Better at Depth
Mineralization at Panuco North is of an intermediate sulphidation epithermal type, characterized by two main veins and a number of vein splays, with similar orientation to other silver-gold-base metal veins in the Zacatecas region.  Silver-gold-base metal mineralization in such systems typically has a vertical extent of between to 400 to >600 vertical metres.  Vein textures, style of mineralization, and gangue/alteration mineralogy indicates that drilling by Zacatecas Silver has intercepted the uppermost parts of the mineralized system…. indicating robust depth exploration potential.

Zacatecas Silver trades as ZCTSF on the OTC and as ZAC on the TSXV….with big shareholders such as Eric Sprott, a proven management team and results like this starting to flow – things could get very exciting in the days and weeks ahead. More core is in the lab and more assays are pending.

To listen to James Turk discuss his outlook for gold and silver in the coming weeks, months and years CLICK HERE OR ON THE IMAGE BELOW.

To listen to Alasdair Macleod discuss the breakout in gold and what to expect next CLICK HERE OR ON THE IMAGE BELOW.