As the world edges closer to the next crisis, today the man who has become legendary for his predictions on QE and historic moves in currencies told King World News that gold is continuing to hemorrhage out of Western central bank vaults.

Gold Hemorrhaging Out Of Western Central Bank Vaults
January 20 (King World News) – Egon von Greyerz:  “Nobody thinks that the West has the gold holdings they claim to possess.  We are seeing outflows of gold out of the US and the UK.  We see the outflow of 400 ounce bars (out of the US) that is certainly central bank gold and we see the same thing out of the UK.  Very often we see outflows of 400 ounce bars into Switzerland where they are then melted down and sent to China. 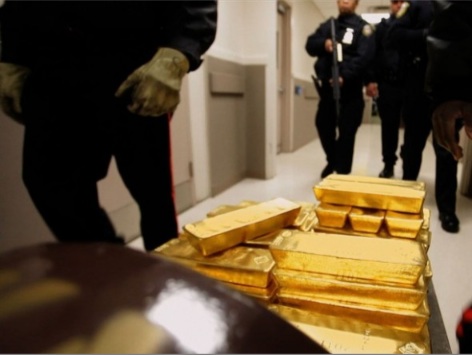 So I think the Western central banks are continuing to feed the market with gold that they are either lending or selling covertly.  I cannot see any way that the US has anywhere near the 8,000 tonnes that is the supposed official holdings of the US government.  And when that comes out and China and Russia start challenging the US to ‘Show us your gold,’ the US will not be able to and the US dollar will come under massive pressure and gold will rise dramatically.

And once the LBMA market blows up, once we see the entities holding all of the paper gold asking for delivery, that’s when we will see the price of gold going up by hundreds of dollars and even thousands of dollars.  That day will…KWN now released the remarkable audio interview with Egon von Greyerz and you can listen to it by CLICKING HERE OR ON THE IMAGE BELOW.