Today James Turk told King World News that this move in gold and silver is long overdue. Turk also said a key breakout level for gold will trigger a move to new all-time highs for the Metal of Kings.

Move In Gold & Silver Is Long Overdue
October 13 (King World News) – James Turk:  Gold and silver are finally flexing their muscles and showing the upside potential for which they are capable, Eric. And why not? Higher precious metal prices are long overdue.

They have traded sideways for a year while inflation is raging everywhere around the globe. Yet central banks continue to print more money. The Federal Reserve is still printing over $100 billion of new money every month.

If the Fed was serious about fighting inflation, they would be doing what Paul Volcker did when he was appointed Fed chairman to stop the 1970s inflation – raise interest rates. But today the Fed is forcing interest rates to stay near zero, so expect more inflation in the weeks and months ahead.

Crippling Inflation
Like the 1970s, oil is taking center stage. While it gathers the attention, it is easy to overlook the fact that price rises are broad based. That’s what the CPI Index revealed this morning. Even by the government’s own calculation the cost of living jumped 5.4% this past year. That hurts but it is even worse when you look at what we need.

Gas is up 42% over the past year. Meat prices climbed 12%. These are 1970s-type numbers but the Fed continues to print money ignoring Milton Friedman’s wisdom:  “Inflation is always and everywhere a monetary phenomenon.”

Of course Covid disrupted supply chains, but that is not the only reason for shortages. They are an early warning sign of people’s expectations that inflation will get worse. One way to help cope with inflation is buying today what you need in the future because things are going to get more expensive if you wait, which creates shortages. Companies need to adjust supply chains to respond to this change in consumer buying.

Short Manipulation Coming To An End
So it is understandable that both gold and silver are finally jumping higher today. Buyers have overwhelmed the selling pressure central planners have been putting on the metals in their attempt to keep a lid on prices, for far too long I might add.

The shares of the precious metal mining companies are also coming to life. They have already been generating good cash flow with many increasing their dividends. We can expect more of that with higher gold and silver prices, and the possibility of higher precious metals prices looks promising…

Gold and silver are not out of the woods yet, but here is what I have been patiently watching as it developed over the past several weeks. Gold is forming a potential inverse head-and-shoulders pattern. These often mark important bottoms, and this one looks very powerful given the length of time it has been forming. 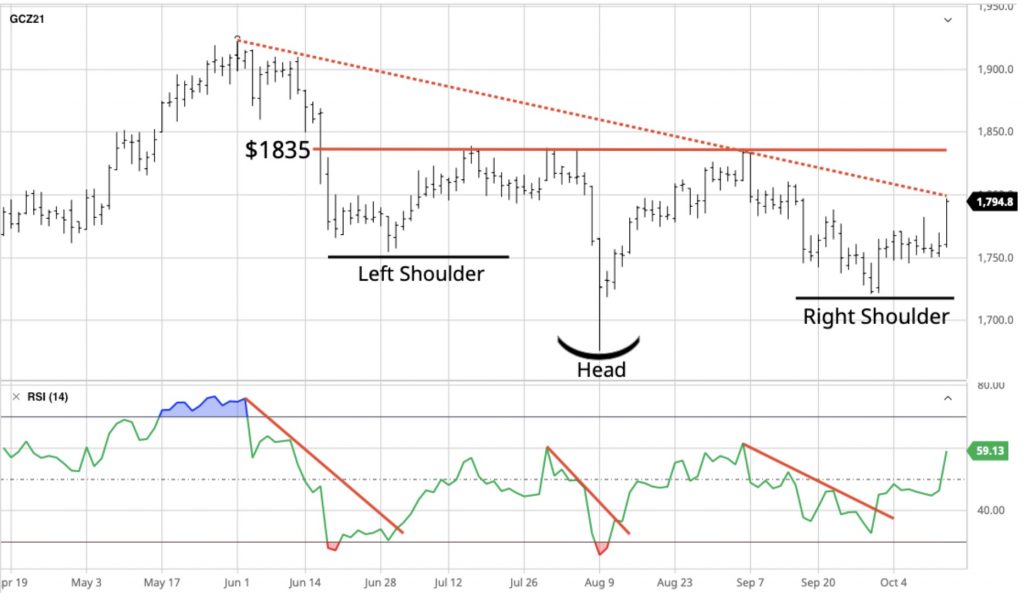 This Will Set Up Surge To New All-Time Highs
The pattern will complete if gold crosses above the neckline at $1835. If that happens, we need to set our sights on new record highs for the precious metals and the companies that mine them.