As we kickoff the third week of trading in the new year, today the man who has become legendary for his predictions on QE, historic moves in currencies, spoke with King World News about the greatest secret of this century and why the price of gold is headed above $6,000.

The Great Secret Of This Century
Egon von Greyerz:  “For most investors, there is only one asset class on the horizon. Whether it is the professional investor or amateurs, when they consider investing, stocks will always be first on their list. And if we exclude all debt instruments, global stock markets are by far the biggest (combined) markets in the world. Global stock markets are capitalized at around $80 trillion currently…

Egon von Greyerz continues:  “Since the creation of the Fed in 1913, investing has been “a stairway to heaven.” But there have been quite a few stumbling blocks on the way. In 1929 the Dow peaked at almost 400 before the crash. The low of the Dow was in July 1932, at 40 – a 90% fall. It then took 25 years, until 1954, for the Dow to get back to 400. This gives an average return of 5% over a 103-year period excluding dividends. This is an excellent return and including dividends the total return approaches 10% annually.

As I have shown in previous articles, the rise of the stock market is very much linked to the increase in debt. For example, since Reagan came to power in 1981, US debt is up 22X and the Dow up 20X. 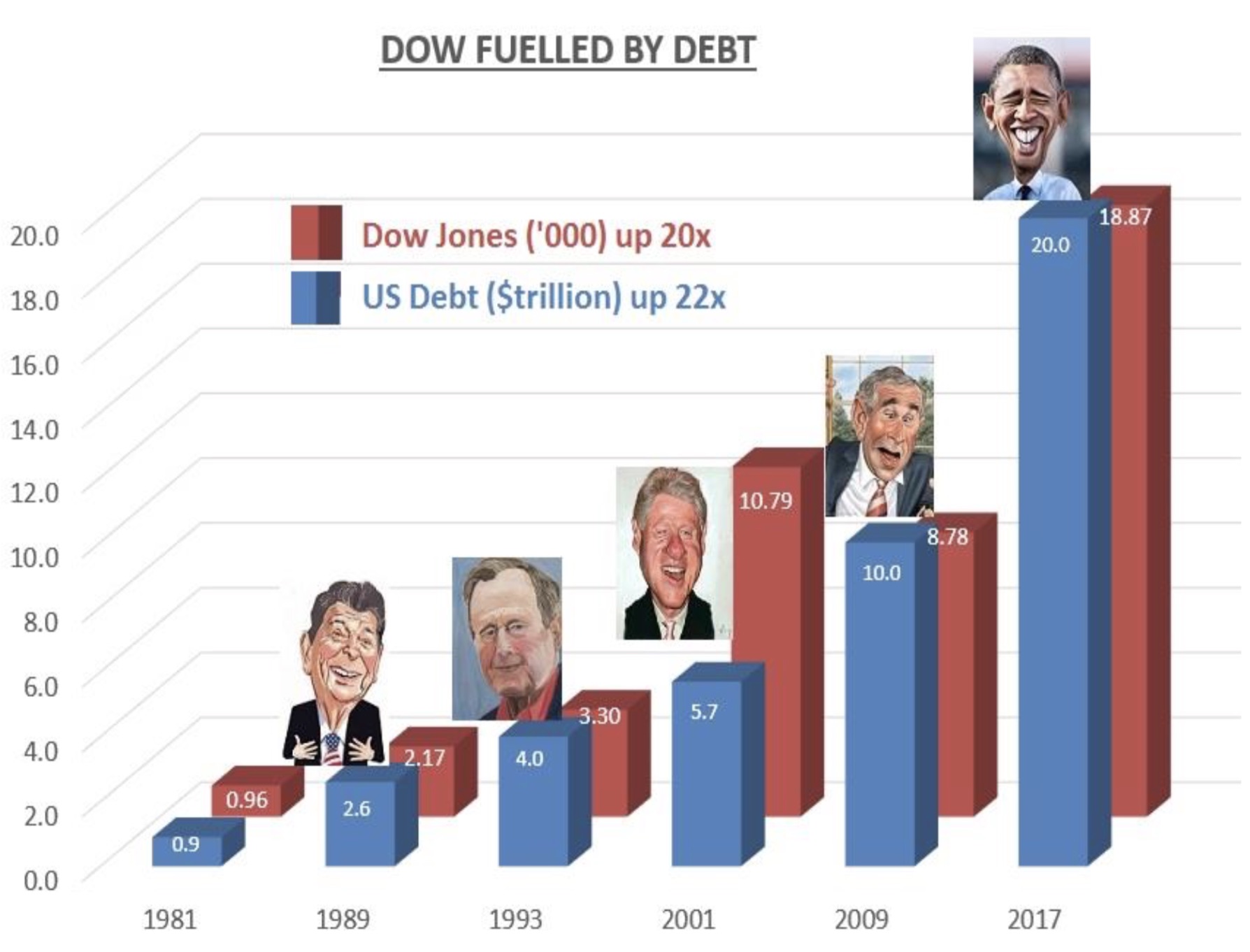 We are now getting to the point when increasing amounts of debt and money printing is required to fuel the stock market. With the Schiller p/e currently at 28.5, the stock market is in bubble territory and approaching the 1929 overvaluation level. But we are not yet in the super-bubble area of 2000. So in theory there is room for this bubble to grow even bigger.

But even if stock markets can become more overvalued, they are now at levels which represent unacceptable risk, especially when we look at a mean of 16.7of the Schiller index. This makes the overvaluation 70%. This necessitates a very stern “Caveat Emptor” (buyer beware) to any stock market investor. 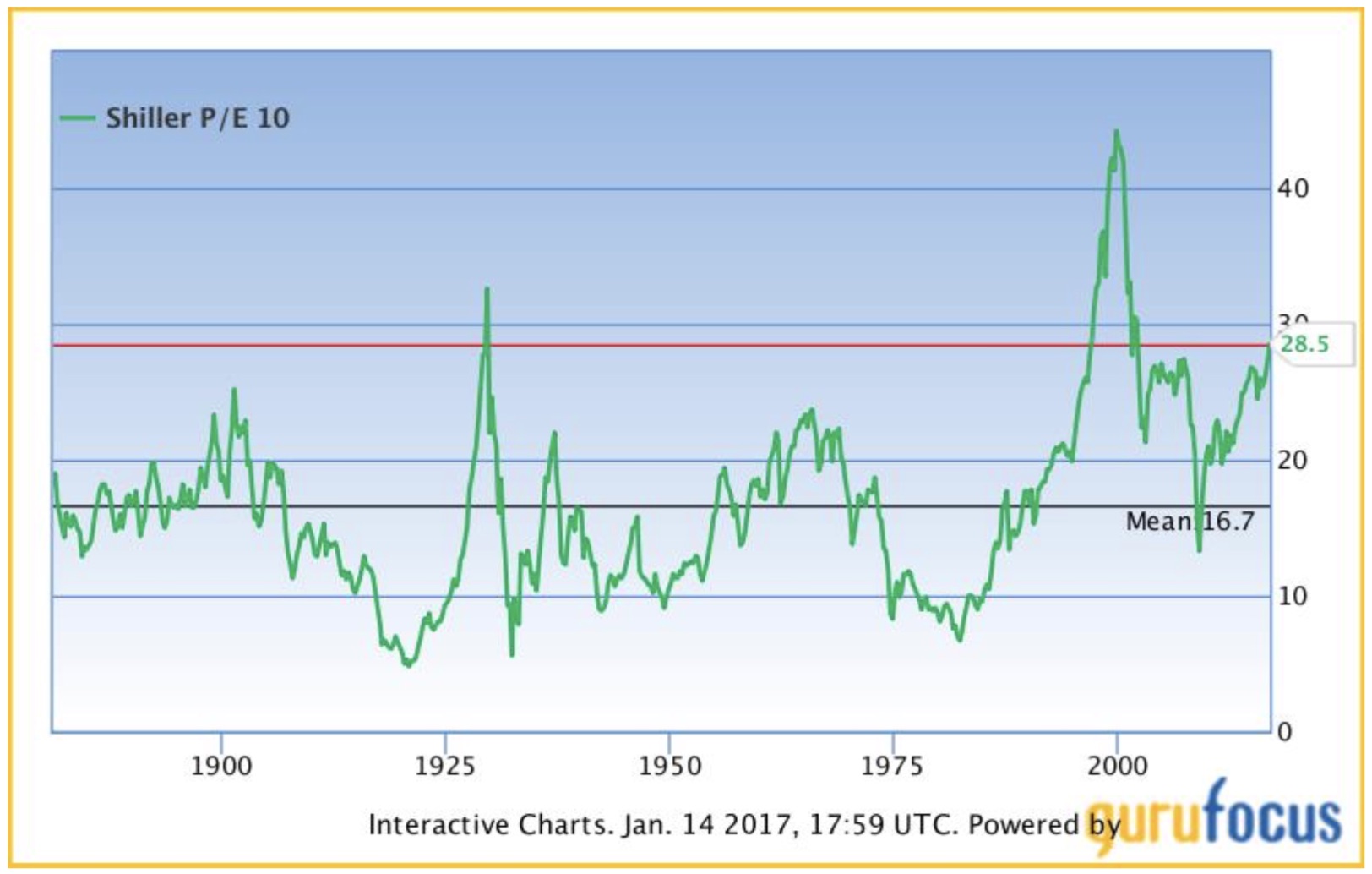 Although stocks, bonds and property all represent very high risk, few investors look for opportunities outside these markets. And it is for this reason that most investors have totally missed the best performing asset class in this century, which is of course precious metals. Most investors don’t look at gold as an investment. Gold is regarded as a volatile commodity and does not appear in the average investment portfolio. Less than 0.5% of world financial assets are invested in gold today. This extremely low level of gold investment shows that very few people understand gold and even fewer look at the performance of gold. Most investors don’t have a clue how gold has performed in the 2000s. If they did know, they would realise that they have missed the best investment in the last 16 years by a very big margin.

The table below shows how gold has done in dollars and pounds compared to the S&P and the FTSE 100.

This little blue and white table above is the secret of this century. Investors in the US would have made $262,000 more by investing in gold than in the S&P. In the UK, an investor would have made £448,000 more by investing in gold instead of the stock market. Very few Brits realise that by buying gold in the year 2,000 and never trading it, they would have made 5.5X their money. The sad thing is that neither the Brits nor the Americans realize that they would make even more money in the next five years by holding gold and silver. But sadly the average person never buys an unloved and undervalued investment. He waits until the price has gone up substantially and it becomes headline news.

Above I have shown what has happened to two major stock markets in relation to gold in this century. But that is just an example. The pattern and gold’s outperformance is consistent in virtually all stock markets in the world.

These incremental returns by investing in gold are the secrets of this century. Only a very infinitesimal percentage of investors are aware of this. But even fewer investors are aware of what will happen in the next few years. Gold will continue to outperform stock markets worldwide by an even bigger percentage. As the chart below shows, the Dow has lost massively against gold in this century. 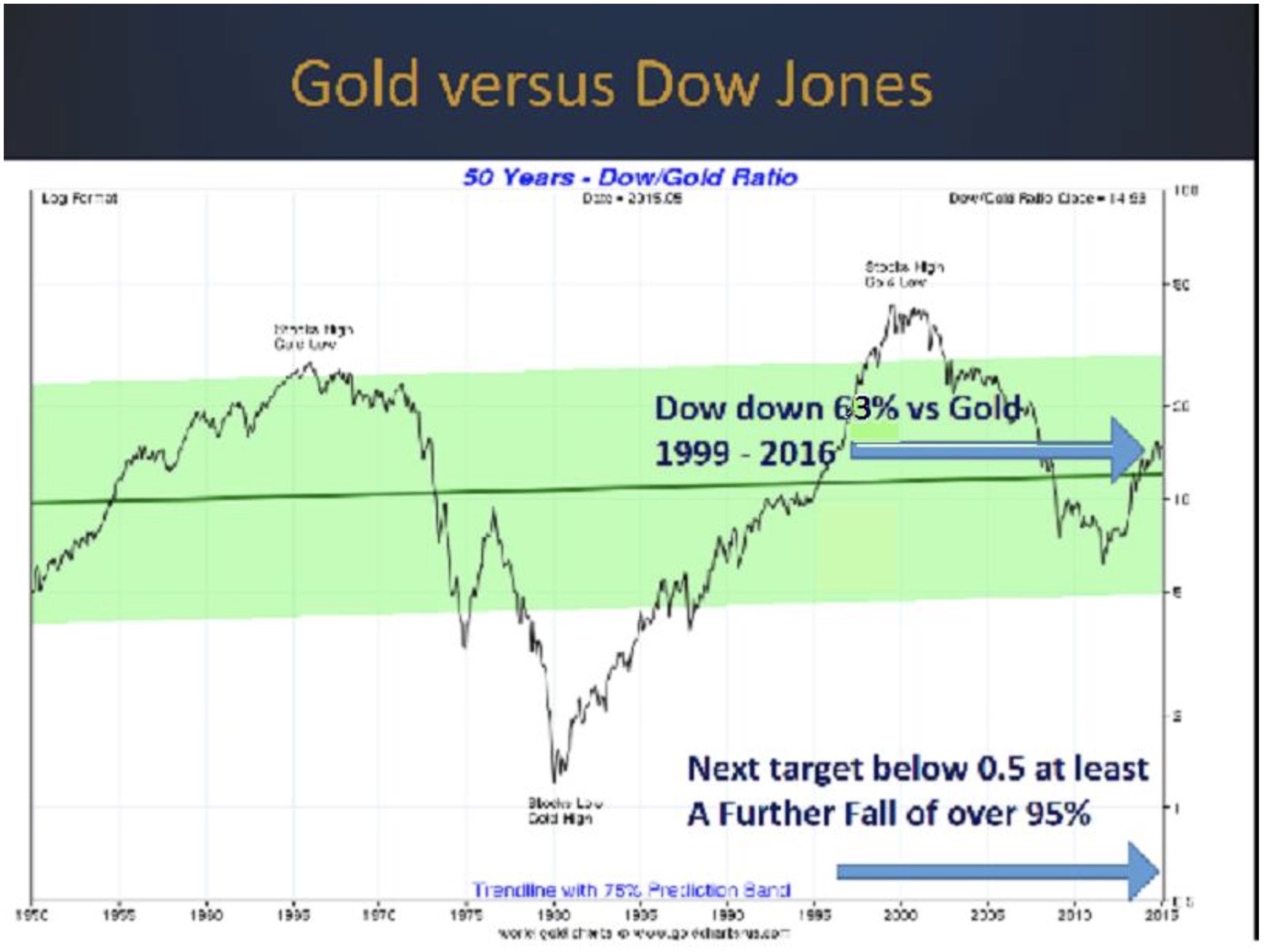 But that is just the beginning. The current correction upward of the Gold/Dow Jones ratio has most likely finished. This correction is very similar to the one in the mid-1970s. Next target should be sub-1, where it was in 1980. A 1/1 Dow vs Gold could be at 10,000 Dow and $10,000 gold, or with hyperinflation they could both be at 100,000. At whatever level they meet, it means that the Dow will have fallen by at least 95% against gold. Very few people can envision such a fall today but it would not be the first time in history.

As stock markets fall and gold rises, the increased demand for physical gold cannot be satisfied at current prices. Currently the silk road countries of China, India, Russia and Turkey absorb virtually all annual gold mine production. The chart below shows the insatiable demand for gold in these countries. Since 1995 they have bought a total of a staggering 31,000 tonnes. 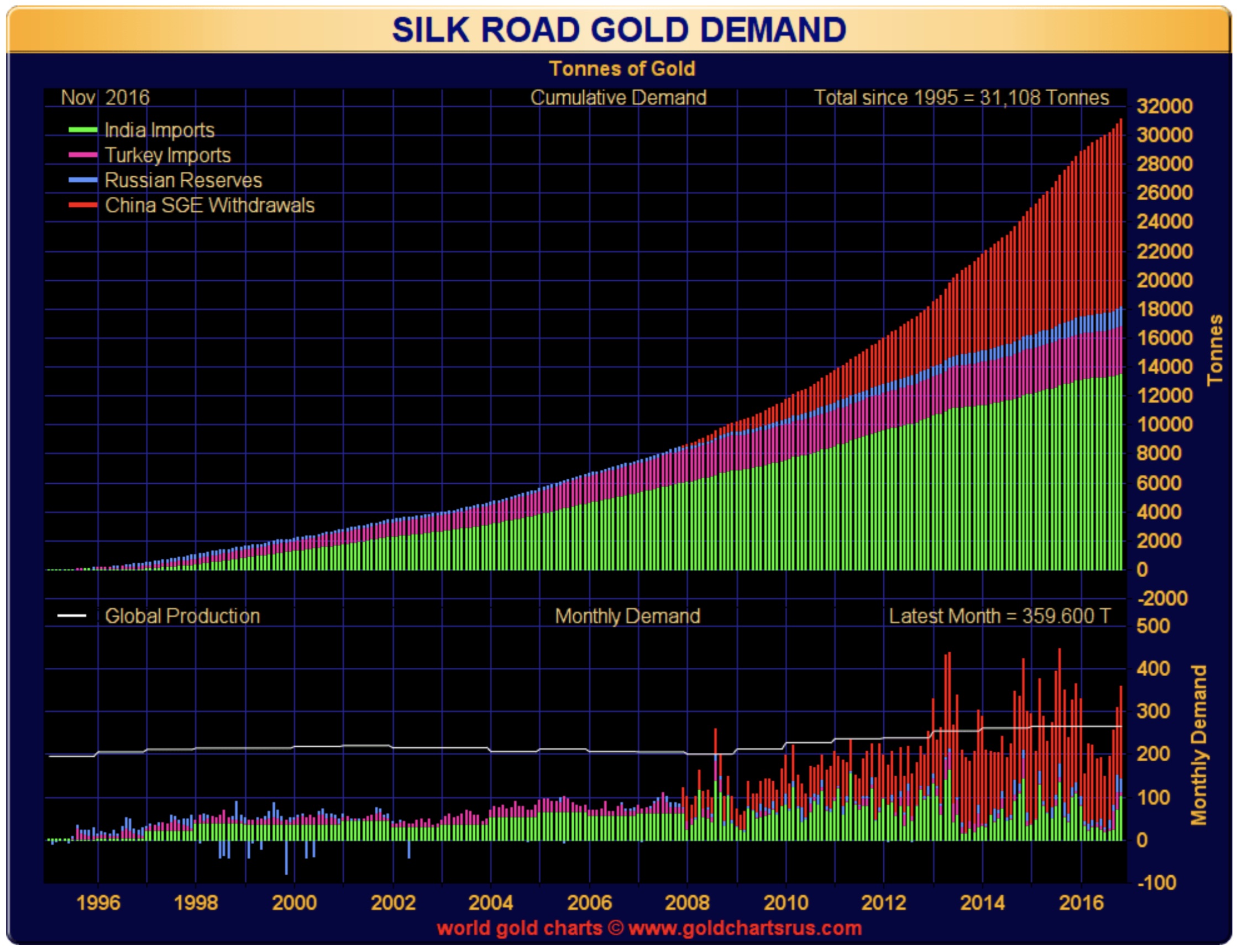 The acceleration in the Silk Road gold demand started in 2008 during the Great Financial Crisis. Since that time, these four countries have bought a total of 21,000 tons. That equals an average of 2,600 tonnes annually, which is slightly less than annual global mine production. Some estimates consider the Chinese demand to be grossly understated in these figures. The demand from the Silk Road countries is likely to continue to be very strong in spite of current political problems in India.

As the gold price starts to rise, demand in the West will increase substantially. The dilemma is that this increased demand will take place during a period of falling goldmine production. Currently 3,000 tonnes are produced annually but this is expected to fall to 2,000 tonnes by 2025.

Official inflation figures have for an extended period of time been between 0% and 2% in most countries. Of course real inflation is considerably higher and even more so if asset inflation is included. But in spite of major increases in credit and money printing, inflation has been low due to low velocity of money. In 2017, we are likely to see an increase in the velocity of money leading to higher inflation and eventually hyperinflation in many countries. As inflation rises, institutional demand for gold will increase for inflation hedging purposes. Currently gold available for investment is around 0.4% of world financial assets. An increase to say 1.4% of global financial assets would involve gold purchases of $5 trillion. With annual gold production including scrap averaging around 3,500 tonnes in the next 8 years, the total gold production during this period would be $1 trillion at current prices. Thus there would be a total deficit of $4 trillion (at current prices) between demand and supply.

$6,000 Gold Is On The Way
The only way that the increased investment demand can be satisfied is with higher prices since production cannot be increased. An institution who wants so spend $1 billion on gold would get 25 tonnes at current prices. But since there will not be enough gold available at the current price of $1,200, prices will need to increase at least fivefold to $6,000 within the next 8 years in order to satisfy the increase in demand. So for the $1 billion investment, the institution would get 5 tonnes of gold rather than 25 tonnes.

There are many fundamental and technical factors that point to an increase in the gold price in 2017. One of these is my good friend Ray Merriman, who is the foremost financial forecaster using cycles and astrology.  He sees the gold price rising strongly staring in 2017 and continuing to at least 2020.

So for investors who hold physical gold and silver, 2017 should be a very interesting year. And for the ones who don’t, $1,200 gold and $17 silver is an absolute bargain compared to the prices we will see in the next few years. However, the most important reason for holding physical gold and silver is not the potential capital appreciation, but as a hedge against a bankrupt financial system. Having said that, remember that the gold and silver must be held outside the banking system because as the financial system implodes, it will act like a giant vacuum, taking down everything within its reach.”

***ALSO JUST RELEASED: The Chinese Have A Jaw-Dropping $22 Trillion In Bank Deposits – What This Means For Gold And China Bears CLICK HERE.