The price of gold snapped back above $1,800 and the price of silver is making its way toward $24, but the mining stocks are the big winner today soaring 5%.

Finally Some Good News
August 23 (King World News) – James Turk:  We are finally getting some good news from the way the precious metals are trading, Eric. We are not out of the woods yet, but there are many reasons to be optimistic and to expect higher prices as we head toward the end of the year.

Looking at the precious metals first from a fundamental point of view, inflation is getting worse. We should not read too much into the drop in crude oil prices over the last few weeks. Gasoline prices remain high and likely to climb higher even if the economy slows…

Hard Assets Becoming More Scarce
The mainstream media is full of stories about supply shortages of many products causing rising prices. The disruptions to supply chains from Covid are real, but that is not the main issue. Supply chain problems are a relatively small part of the reason prices are rising.

Hard assets of all types become harder to find as inflation starts picking up, which it has been doing now for several months. What we are seeing is too many dollars chasing too few goods, so businesses are accumulating inventory before prices rise further. It is therefore understandable that commodities and other tangible assets are becoming harder to find.

A Desperate Situation
Since February of 2020, when Covid started affecting the economy, the Fed has created $5.2 trillion of new currency. Compare that $5.2 trillion of new dollar currency to the $270 billion of gold mined over the past 18 months. That’s 19-times more dollars created than the value of gold mined. And I’m not even factoring in the currency created by the world’s other central banks.

The Fed is creating this unbelievable amount of new currency because federal government spending is soaring. In the 2020 fiscal year, the federal government borrowed 64% of the $6.5 trillion it spent. So most of what it spent came from the Federal Reserve and the banking system that turned government debt into dollar currency. That’s the real reason that explains why prices are rising. The quantity of dollar currency is soaring, but there is more reason to worry.

Not only is this new currency still in the system, the Fed still has the money spigots wide open. It has to keep them open to provide the federal government with the dollars it is spending over and above what it receives from taxes. We will need to watch closely the next several weeks how high the politicians raise the national debt ceiling. It could be a whopper increase given the federal government’s spending plans, and that could send gold, silver, and the mining shares soaring.

This chart shows the technical picture is also turning in favor of gold. 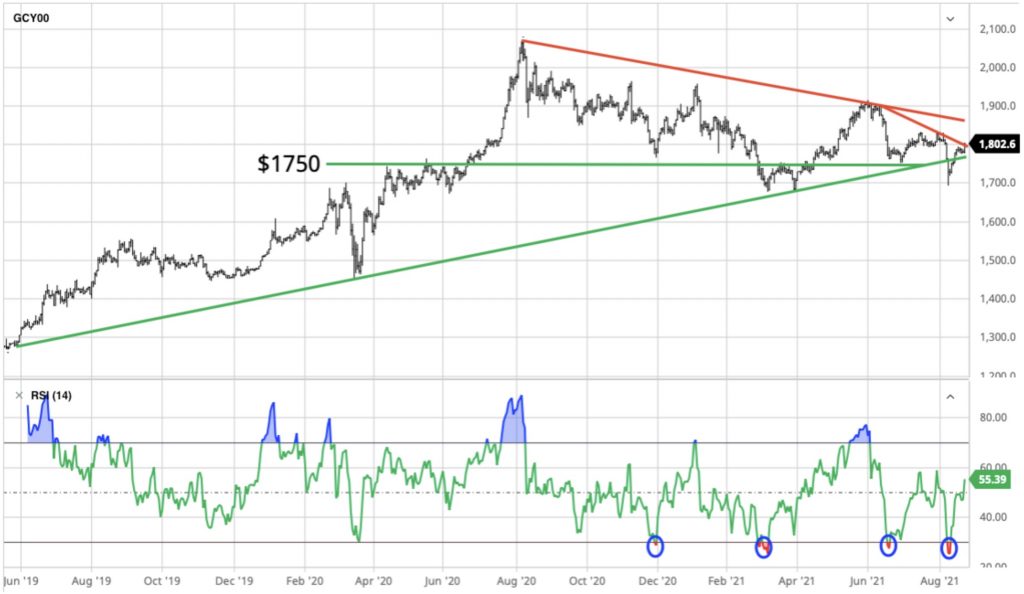 Takedown Fails As Gold Snaps Back Above $1,800
Gold fell into oversold territory 4 times since December. This last drop is particularly important because it broke the 2-year uptrend line. If the central planners were going to break gold lower with their market interventions, that was their opportunity to do it.

But trading volume of paper derivatives collapsed. The physical market took over, so the drop testing support at $1700 was nothing more than a head-fake. The central planners had no one to sell their paper promises to. The buyers were demanding physical metal, not paper promises. The manipulators knew their game was up. They relented, and gold is back above $1800.

Break Above $1,870 Will Send Gold To New All-Time High
Right now gold is attempting to hurdle its short-term downtrend line. If that happens it will bring into the market the momentum buyers. That should provide enough buying power to drive gold to resistance at the $1850-$1870 area. Once that second downtrend line is taken out, new record highs will follow, which will do wonders for the precious metal mining shares…

Some mining companies are already reporting stunning increases in cash flow and dividends. A 10% increase in the gold price could mean a doubling or tripling in cash flow for some companies. When precious metal prices are rising because of inflation, margins widen more quickly than costs rise. If people are looking for ways to generate their own cash flow, look at the dividends being paid by mining companies. Then calculate the impact to each company’s earnings for every $25 per ounce rise in the price of gold multiplied by every ounce of production.

Dividends Will Equal Today’s Share Prices
It reminds me of the 1970s, Eric. By 1980, the annual dividends being paid by gold mining companies equalled the price of the company’s stock ten years earlier. I suspect that history is about to repeat.

***ALSO JUST RELEASED: Gold Surges Above $1,800, Silver Also Rallying, Plus What Is Now Gone In The Western World CLICK HERE.