Today James Turk told King World News that the price of gold breaking above this key level will trigger a move to new all-time highs.

Gold & Silver Looking Better
October 25 (King World News) – James Turk:  We still have a ways to go to get a clear upside breakout in the precious metals, Eric. But both metals are making good progress by cutting through overhead resistance, and today was important for two reasons.

First, even though gold and silver jumped 1.6% and 4.7% last week, this week still began with good upside follow through. That is the kind of trading action one expects to see in bull markets, which is consistent with the other good news…

Gold Hurdles 4-Month Downtrend
Gold both hurdled $1800 and broke above its 4-month downtrend line at the same time. Blowing through resistance like that is an important sign of strength.

So the short-term trend has turned up for both gold and silver. We can see the new uptrend starting on this gold chart.

Gold Needs To Decisively Break Above $1,835
To Mark A Major Bottom 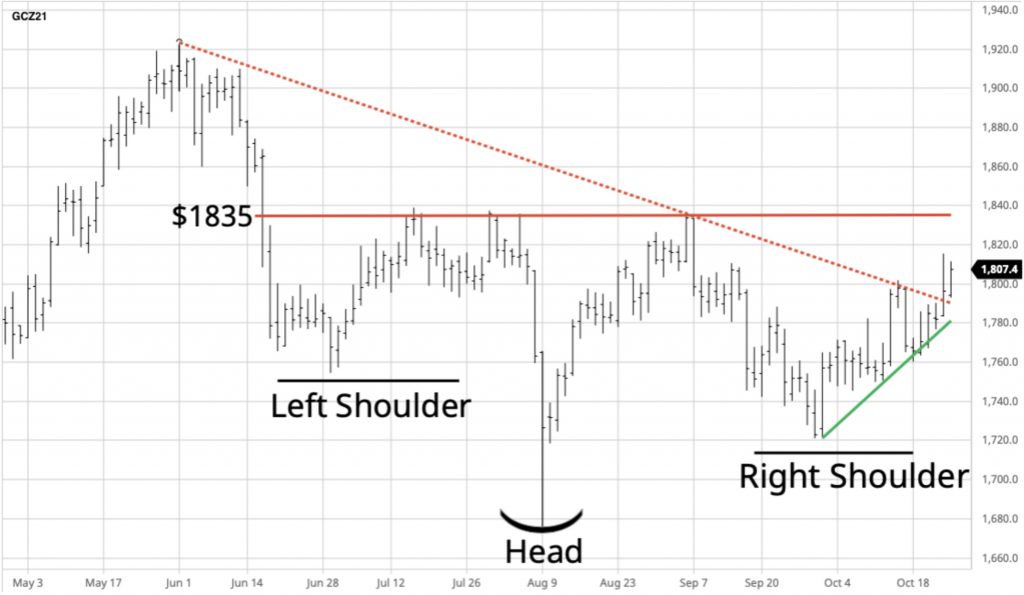 This chart also shows that gold bulls are not yet out of the woods. For that to happen gold needs to break above $1835, and that event in all likelihood would ring the bell that the bottom has been made.

NEXT MOVE: New Record Highs
More importantly, it would set up an advance to last year’s record high price. There is of course never any certainty, but the odds of that happening are high. The reason is the inverse head-and-shoulders pattern forming on the chart, which I pointed out for KWN readers the last time we spoke.

These patterns have a high degree of reliability because they reflect investor emotions. Remember how negative investor sentiment about gold was back in August when that head was formed? It was a selling climax. Gold then bounced and became short-term overbought in September at that $1835 overhead resistance level. Gold fell back and the right shoulder started forming.

Investor sentiment worsened shaking out some weak longs, but gold held well above the August low. It was the first sign that this pattern might be developing.  By the end of September, gold – and silver too for that matter – started flexing their muscles.

Gold is telling us a story. It’s that it has been unloved and undervalued for too long. The next part of its story will be hurdling $1835. Let’s see if it happens in November.

One Of The Biggest Acquisitions Of The Year!
Torq Resources Inc. has acquired an option to earn a 100-per-cent interest in the 3,250-hectare (32.5-square-kilometre) Santa Cecilia gold-copper project, located in northern Chile. The project is in the southern region of the world-class Maricunga belt and immediately north of the El Indio belt. It is estimated that the Maricunga belt could host up to 90 million ounces of gold endowment. The belt is characterized by gold epithermal and gold – copper porphyry deposits, including world-class multi-million-ounce deposits such as Salares Norte, La Coipa, Cerro Maricunga, Marte, Lobo, La Pepa, El Volcan, Caspiche and Cerro Casale.

A Message from Shawn Wallace, Executive Chair & Director:
“The Santa Cecilia gold-copper project represents the culmination of our acquisition strategy in Chile. It is our belief that exploration at a project of this magnitude will be transformative for Torq. I would like to thank our entire team, both here in Vancouver and on the ground in Chile, for all their contributions. We look forward to unlocking the exploration potential of the property and adding long-term value for all stakeholders.”

“Santa Cecilia completes an extraordinary exploration pipeline, which includes our Margarita iron-oxide-copper-gold project, where drilling is ongoing, and the Andrea copper porphyry project, where exploration is expected to commence in early 2022. Our premier portfolio provides Torq Resources with great potential to make Chile’s next significant copper-gold discovery.”

A Message from Michael Henrichsen, Chief Geologist:
“Santa Cecilia represents an extraordinary opportunity for discovery in Chile. Effectively, it gives us the rare ability to step back in time, to the early 1990’s, when the first round of discoveries were being made within the Maricunga belt. The previous operator’s drilling has suggested a large oxide gold system and the potential for high-grade precious metal structures, while the two holes in 2012 have demonstrated a bona fide porphyry system beneath the near surface oxide mineralization. We are in an excellent position to expand both the oxide and porphyry mineralized systems as well as to drill entirely new high quality targets for the first time, which we believe have the potential to contribute to the discovery of a cluster of mineralized porphyry bodies.”

A Message from Waldo Cuadra, General Manager, Chile:
“As an explorationist, to be able to identify, acquire and begin exploration at a project such as Santa Cecilia, located within the gold-copper porphyry belt in Maricunga, is an exceptional event. Our group in Chile has been pursuing this project for many years, and finally, with the full Torq Resources team, we have been able to negotiate a favorable agreement. This is a significant milestone, and we very much look forward to initiating exploration at a project we believe holds significant potential for the discovery of a world-class gold-copper deposit. Torq Resources, symbol TORQ in Canada and TRBMF in the US.