One European analyst just warned the gold price is set to surge as a day of reckoning is rapidly approaching for central banks.

Fed & ECB vs. BoJ Balance Sheet in % of GDP
By Ronald-Peter Stoeferle, Incrementum AG Liechtenstein
March 20 (King World News) – The balance sheet of the Federal Reserve measured in % of US GDP is slowly decreasing due to QT.

We could observe a similar process in Japan some years ago, before the monetary expansion took off and the balance sheet of the BoJ increased tremendously, actually reaching the GDP level of Japan!…

From our point of view it is unavoidable that sooner or later the Federal Reserve will implement another round of QE.

Further large-scale experiments like MMT, GDP targeting and negative interest rates might be expected in the course of the next severe downturn (see chart below). 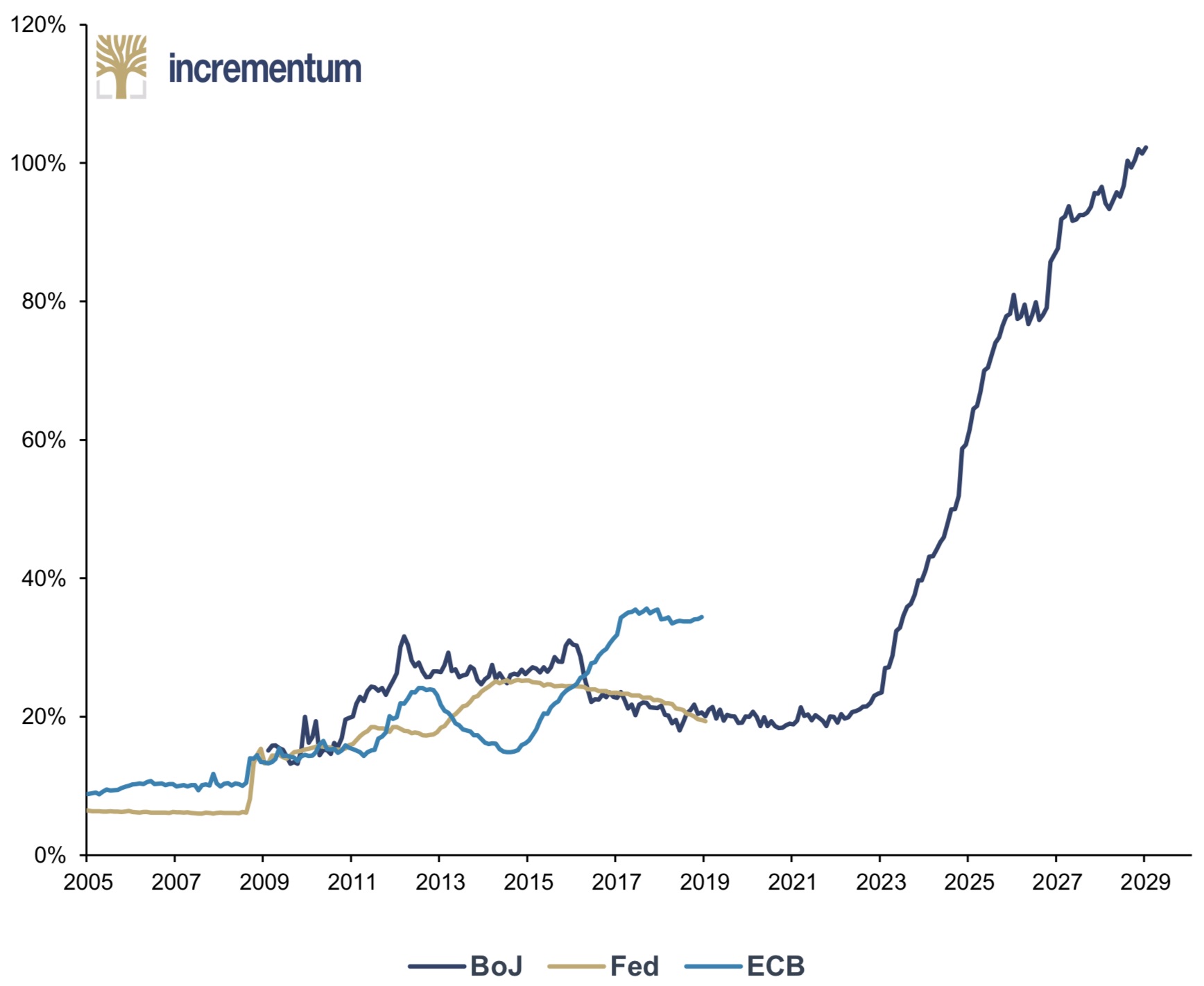 “The U.S. is beginning to sport a debt-to-GDP ratio worthy of any banana republic. Therefore, we believe that exposure to gold is both timely and potentially rewarding.” — John Hathaway

Interest rate service reached a new record high of $545 billion in 2018 and will continue to rise in the coming years. 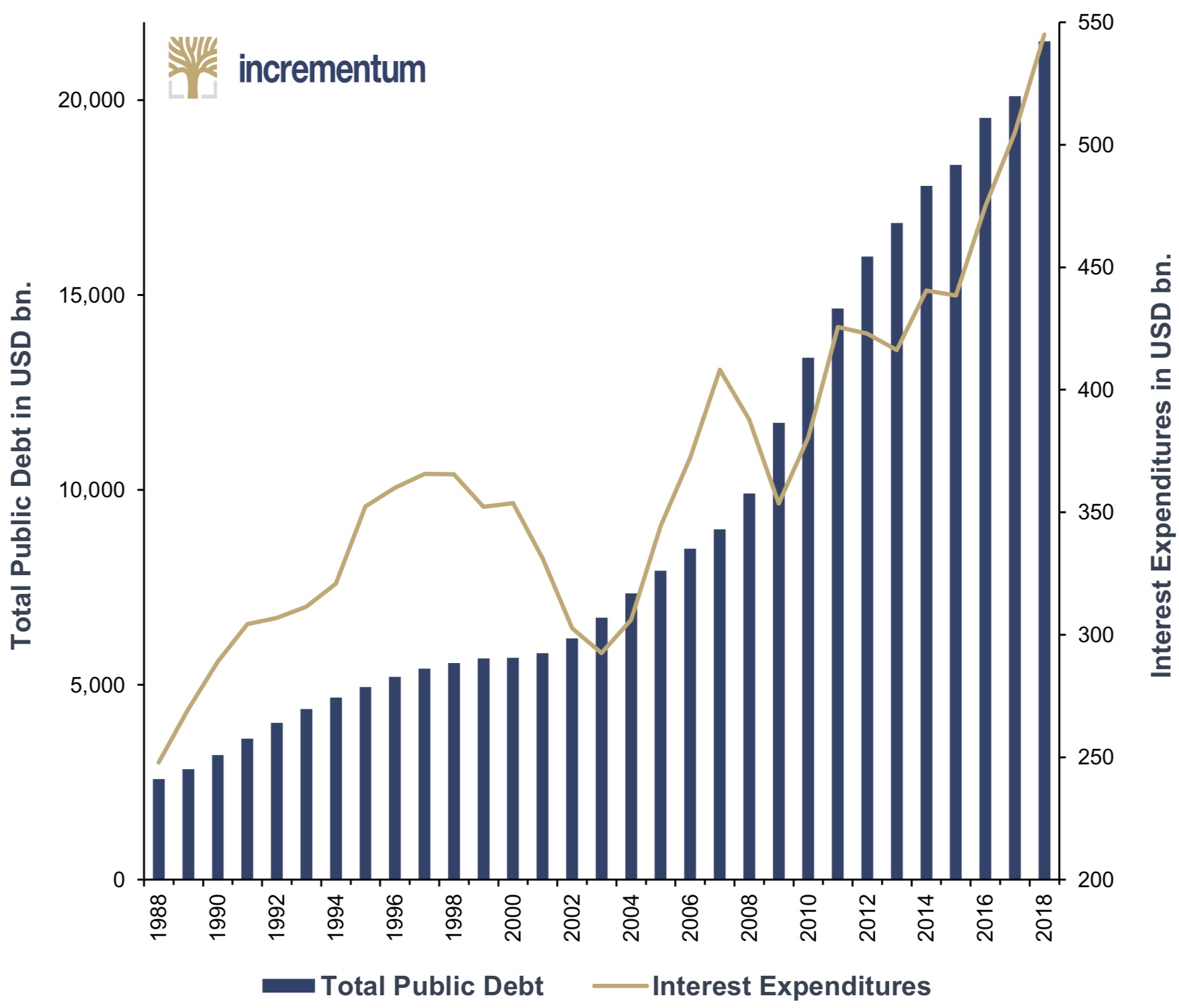 Real interest rates – their direction and momentum – are one of the most important drivers for gold!

There are two time periods that were shaped by predominantly negative real interest rates (blue shading at right): the 1970s and the period since 2001. 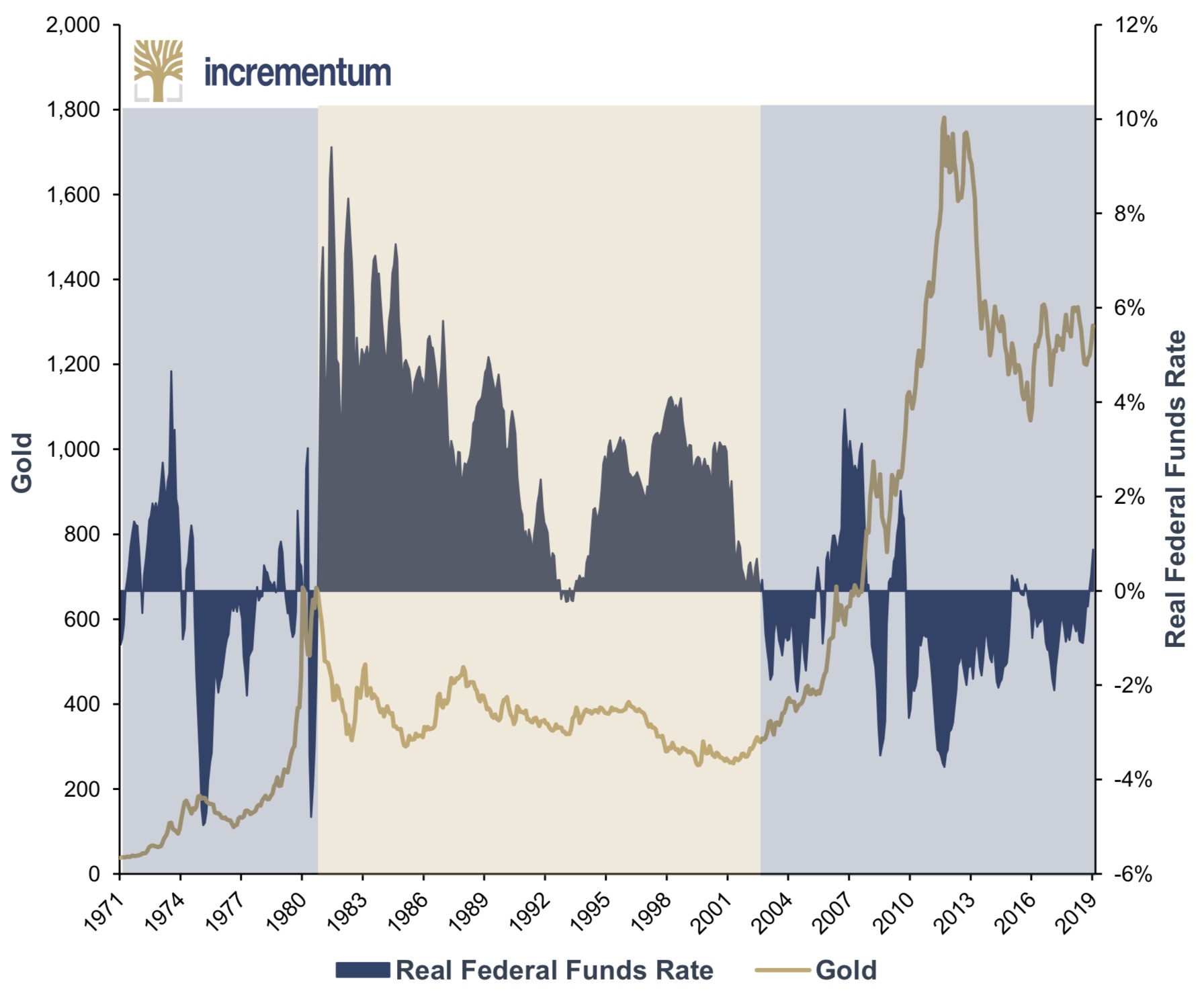 Both phases clearly represented a positive environment for the gold price.

One can also discern that the trend of real interest rates is extremely important for the gold price.

Global Asset Class Sizes
Real estate comprises over 50% of the value of all global assets, including equities, bonds, and gold (2%).

Real estate is the preeminent asset class and the one that is most impacted by global monetary conditions (interest rates) and investment activity. 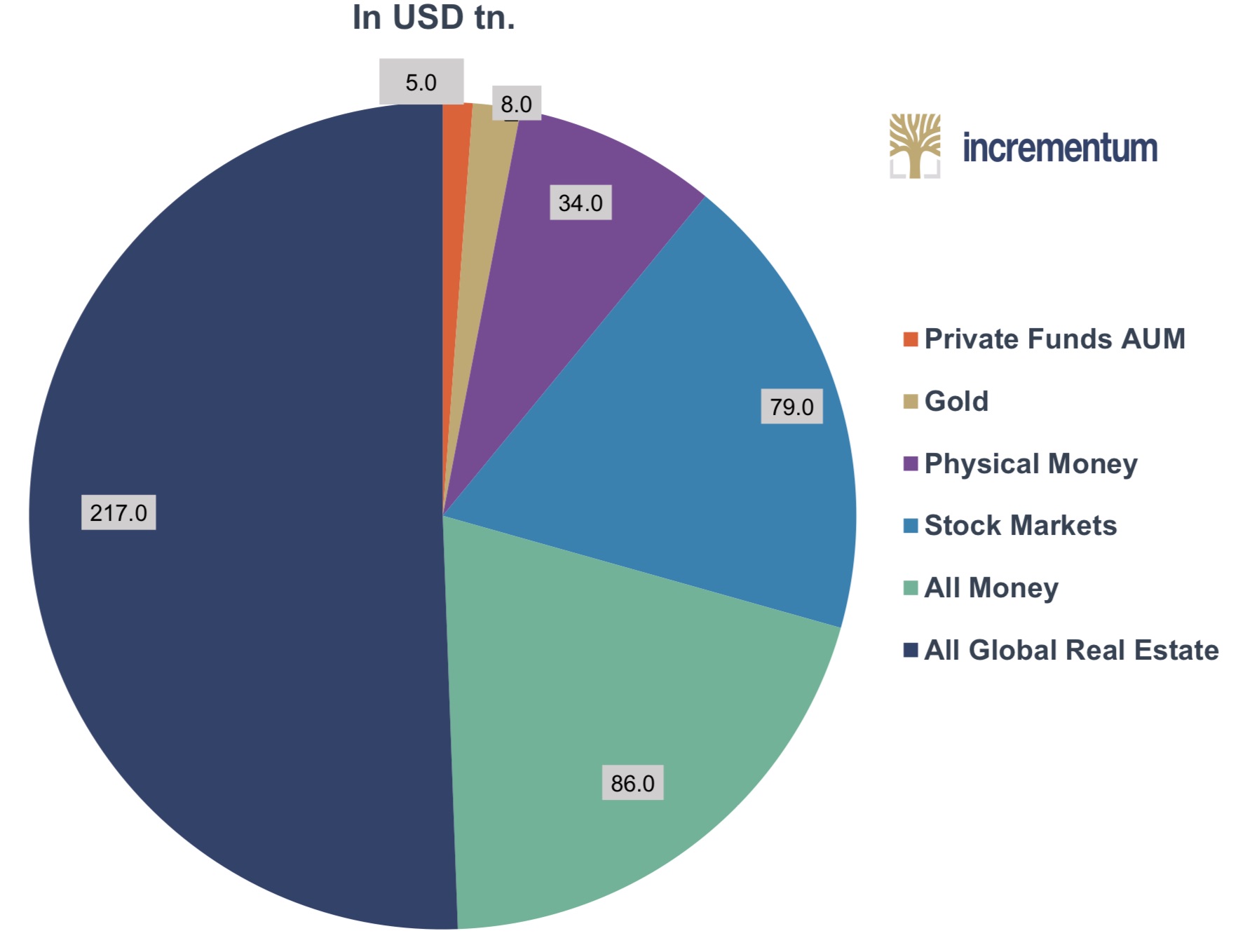 “The Chinese want to de-dollarize. But they want also to keep their capital account closed. There is a very astute solution the Chinese have found: China says ‘If you have too many CNY because you have been selling a lot of oil to China, you can keep your CNY in your reserves, fine with us. Or we can give you gold instead of CNY.” — Charles Gave

Change in Gold Reserves Held by Emerging Countries
In recent years the “axis of gold”* countries have questioned the US-dominated global economic order. Their distrust is reflected in the steady expansion of their gold reserves. 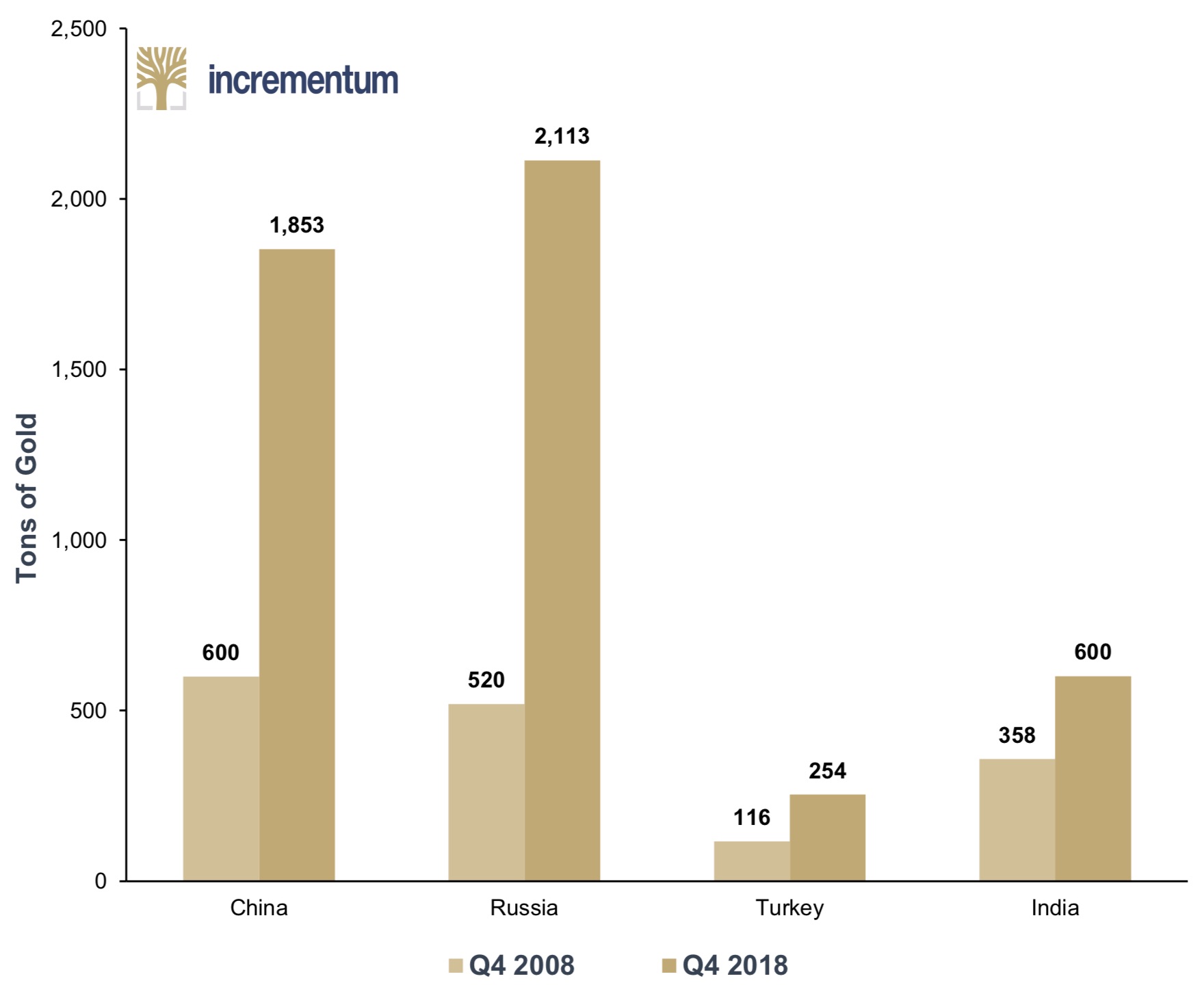 The increase in gold reserves should be seen as strong evidence of growing distrust in the dominance of the US dollar and the global monetary and credit system associated with it.

Gold Reserves and US Treasury Holdings of China and Russia

Russian Gold Reserves
While official gold reserves initially remained by and large constant after the fall of the Soviet Union and until 2006, they have been in a steady uptrend since then. In 2018 alone, Russia’s gold reserves have risen by 275 tons, to 2,113 tons (see chart below). 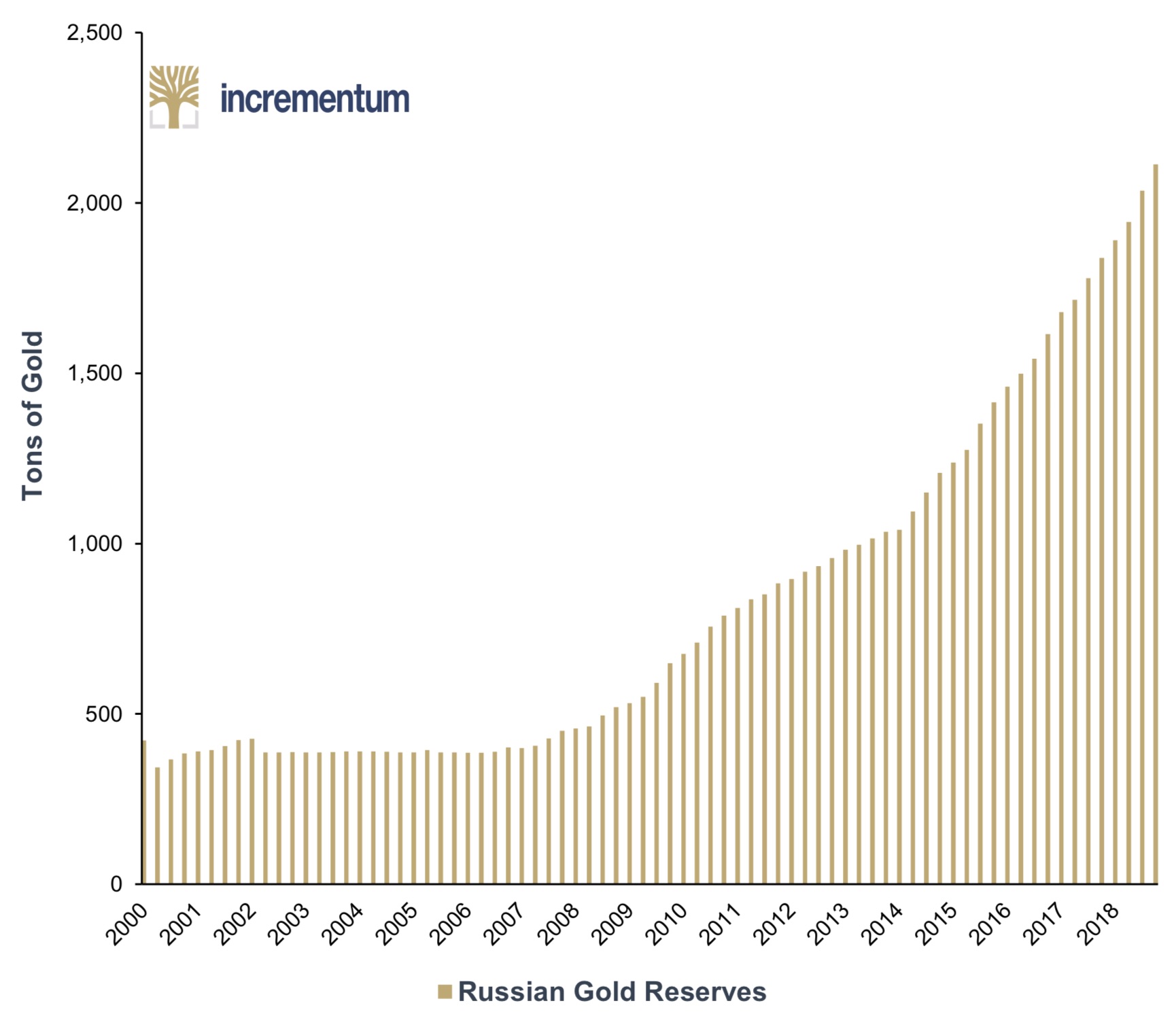 The accumulation of reserves has accelerated significantly since the beginning of the Ukraine crisis in 2014, in the wake of which Western countries imposed economic and financial sanctions on Russia.

Currently, the monetary base of the Russian ruble has by far the highest gold coverage ratio, at almost 55%.

“It’s all about relative supply curves – the supply curve for bullion is far more inelastic than is the case for paper money. It really is that simple.” — Dave Rosenberg 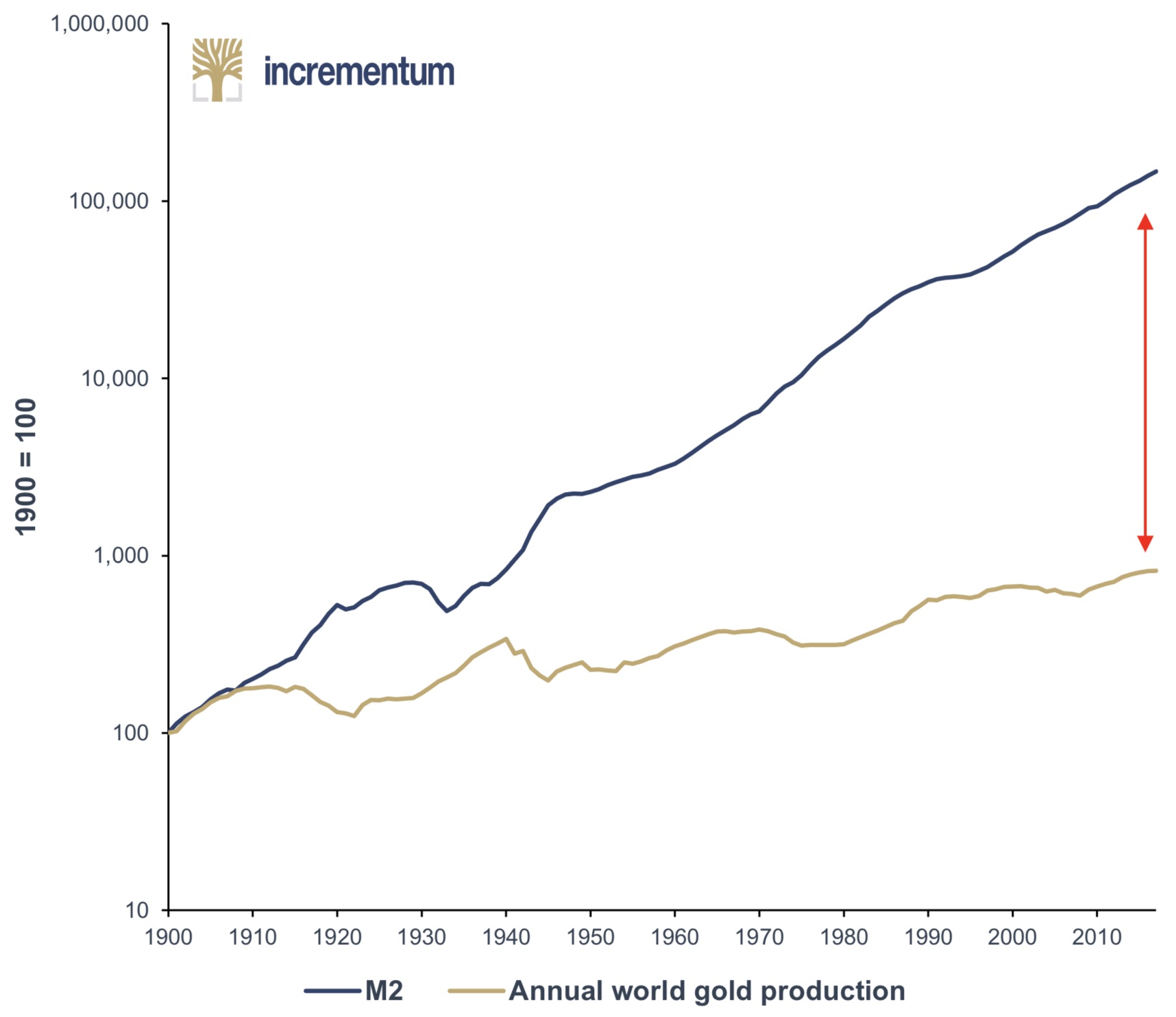 King World News note: The last chart says it all in terms of the gold price.  Gold is now at one of the most undervalued points in history.  The same could be said of the mining shares.

***KWN has released the powerful KWN audio interview with Gerald Celente and you can listen to it by CLICKING HERE OR ON THE IMAGE BELOW.

***Also just released: Multi-Billionaire Hugo Salinas Price: The Fed Is Now Trapped – What This Means For The US Dollar & Gold CLICK HERE TO READ.