If Jack Dorsey’s terrifying prediction of hyperinflation unfolds it will destroy society.

“Hyperinflation is going to change everything. It’s happening. It will happen in the US soon, and so the world,” — Jack Dorsey, Twitter Founder

Yes, the value of bitcoin and even gold will go dramatically higher in that scenario, the former of which he’s certainly hoping for but it would destroy the businesses of not just Twitter (whose stock I own for clients and myself) and Square because of the damage it would do to its customers and its end consumers and countless others. It would also wreck society as we know it. See the Weimar Republic rule over Germany from 1919 to 1933 and Zimbabwe.

I saw some refinement in the thinking of Jay Powell on Friday when he spoke but I still think he’s playing a dangerous game and the comparisons to the Fed president Arthur Burns who presided over the 1970’s inflation still hold. He said “I do think it is time to taper. I don’t think it is time to raise rates.” Let’s go back to why the Fed created the taper process. After QE1 and QE2 ended 10+ years ago, it was a hard stop. The Fed told us how many assets they were going to buy and the dead stop date it would end. Weeks after each time, the S&P 500 fell almost 20%. In 2013 in response to the bond market hissy fit the Fed pivoted and tapered instead in a go slow process.

While I believe tapering is tightening just based on less flow and less air being pumped in, the Fed’s idea of countering inflation is to still take its balance sheet to north of $9 Trillion from the $8.5 Trillion it stands today. Rates will still be at zero in the summer of 2022 most likely. In his speech on Friday he said “I would say our policy is well positioned to manage a range of plausible outcomes.” While he has his opinion, I think he’s so badly positioned because inflation is threatening us now and he’s taking baby steps, and one can argue no steps, in order to counter it…

The Truth About QE
Why is this? He made it clear on Friday that he’s afraid to tamp down on the demand side as an offset to the supply constraints. He said in referring to more supply, “we want to give full time for it to come back before we start restraining demand with interest rate increases.” As QE ONLY juices asset prices, monetizes the US Treasury debt and gooses the housing market via MBS purchases, Jay Powell is telling us that he is NOT going to inhibit the demand side of the supply/demand curve until next summer and thus has all his chips on the supply crunch resolving itself. This is NOT being “well positioned”, this is not dealing with inflation. This is a hope strategy.

Janet Yellen over the weekend basically endorsed the reappointment of Jay Powell by defending the spot he’s getting most criticized for by Elizabeth Warren, bank regulation. She said on CNN’s State of the Union that that banking system held up well during the pandemic, “because of the improvement in capital liquidity, risk management, stress testing. And those improvements have stayed in place during the Powell regime.” We’ll obviously soon see if Biden takes her advice and I think he will.

Meanwhile In Germany
Data wise it was pretty quiet overseas but we did get the important German IFO business confidence index for October and it slipped to 97.7, the lowest since April from 98.9 last month and that was just under the estimate of 98. Both Expectations and the Current Assessment were lower m/o/m. The IFO said in their usually succinct way, “Supply problems are giving businesses headaches. Capacity utilization in manufacturing is falling. Sand in the wheels of the German economy is hampering recovery.” The lack of faith that the ECB will do anything about inflation is why the German 10 yr breakeven continues higher, by 2.7 bps today to 1.93%, the highest since September 2012. 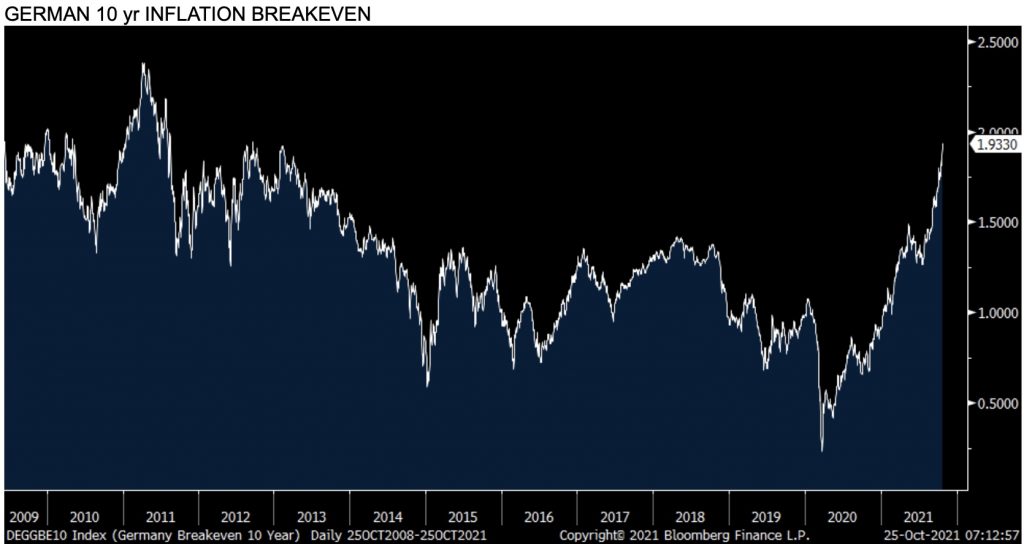 Something Very Big Has Just Been Uncovered in the Prolific Ring of Fire
Over the past several months explorer Kalo Gold has flown under the radar while making major progress at its Vatu Aurum project in Fiji. Its focus was not on drilling, but on geophysics and it appears that Kalo could be onto something very big. They have outlined not only several very large high priority drill targets near an existing deposit but have shown that there is potentially two large shallow porphyry heat sources just below it. Kalo is now getting ready to commence drilling.

On its own this is very exciting news, but what makes it even more special is that it is located in the prolific South Pacific Ring of Fire, host to some of the world’s largest high grade gold systems, and Kalo already has a near-surface deposit, Qiriyaga Hill, with several high grade intersections including 36.02 g/t Au over 8.75 metres and 13.36 g/t Au over 10 metres that is potentially just the tip of the iceberg.  This has recently attracted one of the world’s legendary ore finders, Paul Harbidge, former SVP Exploration of Goldcorp (sold to Newmont to US$10 billion in 2019) and President and CEO of GT Gold (sold to Newmont for US$311 million in 2021) to its team. Kalo Gold, symbol KALO in Canada and KLGDF in the US.

This Worry Is Hanging Over Global Markets