With the world on the edge of war and the crude oil market surging, is this about to trigger shockwaves in global markets?

Boockvar added:  “I believe this is very important…the end of ECB QE. Just look again at the level of European interest rates. It still is hard to believe where they sit and their bond markets I believe remain a huge train wreck ahead of us.”

10-Year Treasury Could Hit 3.4% In A Matter Of Weeks!
From top Citi analyst Tom Fitzpatrick:  “The present price action on the daily 10 year yield chart is looking increasingly like that seen in late December/early January before the next impulsive move higher. If so, it would suggest we are just days away from breaching not only the trend highs at 3.03% but also the pivotal highs posted at 3.05% in January 2014. Such a development, if seen, would suggest that we could see 3.35-3.40% in a matter of weeks (see chart below).”

This Will Create Shockwaves In Global Markets 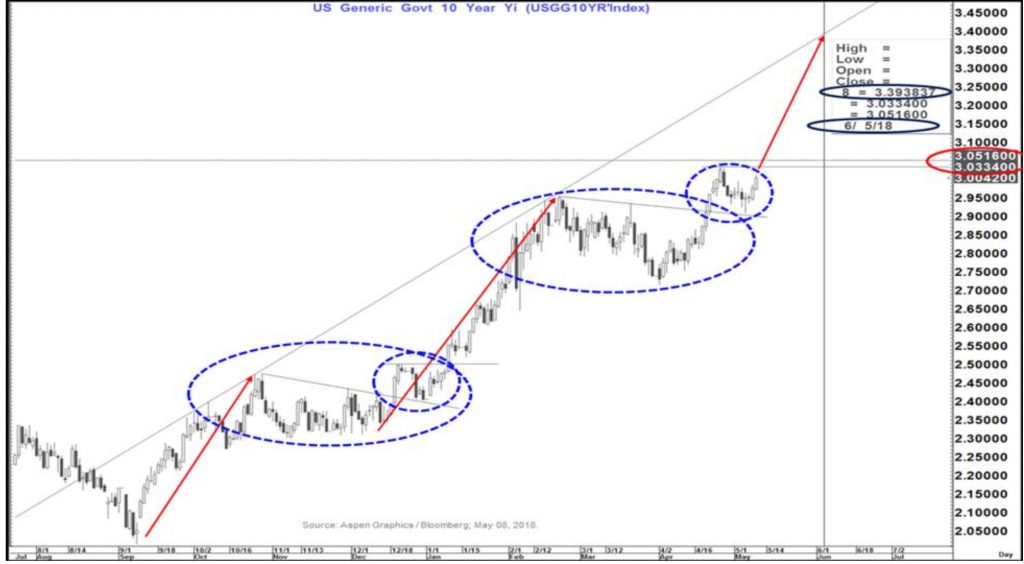 What Does This Mean For Gold & Silver?
Despite the recent pullback in commodities and rally in the US dollar, the central banks of the world are now in serious retreat in a number of major markets.  And QT is going to be very painful for holders of paper financial assets and bullish for gold and silver.

Michael Kosowan:  “Yes, this is a big acquisition for us. We announced a Carlin-style acquisition last week but the reason this is such a big deal is because it’s a very large property package, approximately 43,000 hectares, which is extremely hard to acquire in that area with a Carlin-style trend. Adding a second Carlin-style gold project in Utah significantly expands Torq’s exploration footprint in the state’s principal mining district. We are enthusiastic about the opportunity and geological potential West Mercur represents for our shareholders.”

Dan McCoy, chief geologist of Torq Resources, stated:  “Torq’s technical team believes that the West Mercur project has all the indicators of a Carlin-style gold exploration target. The size of the property, the multitude of targets and the proximity to the analogous Mercur mine provide a high-quality opportunity for the company to make a significant discovery.” TORQ Resources – Stock symbol TORQ in Canada and TRBMF in the US.

***Also Just Released Richard Russell Warned People To Prepare For Something Worse Than 1929-1932. And Will U.S. Seize Gold? CLICK HERE.

Bulls Are In Charge, Central Bank Intervention, 2nd Lowest Reading In History, Plus Levels Not Seen In 70 Years