As the inflation nightmare continues, despite today’s orchestrated takedown ahead of tomorrow’s Fed Meeting, gold, silver and the mining stocks are set to explode higher. 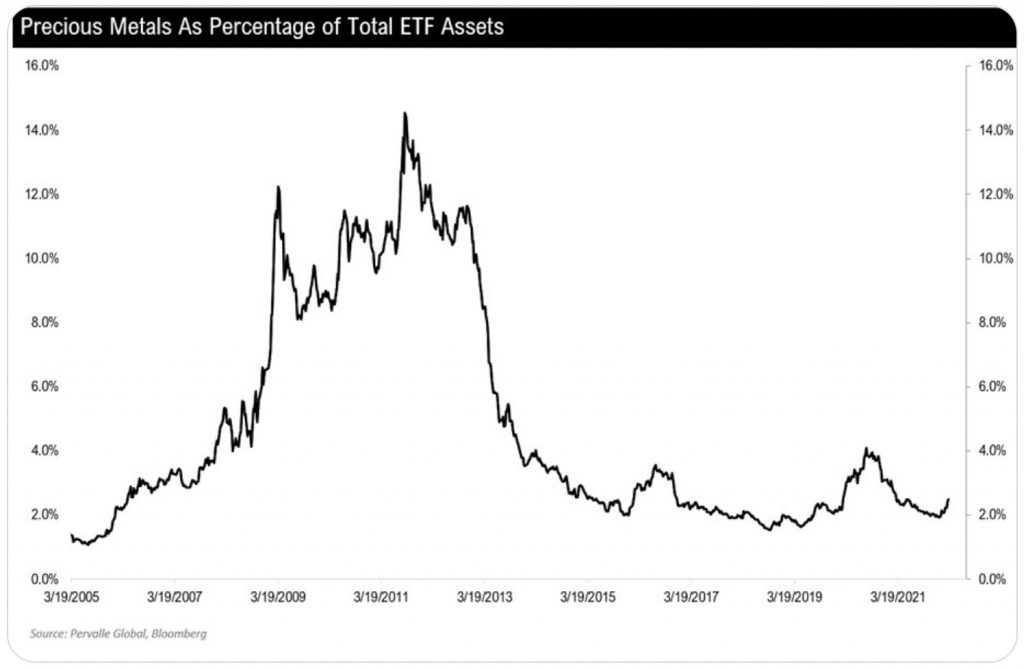 So It Begins
Steph Pomboy:  And so it begins…. this is key to remember on days like today. The stock market may celebrate any positive headline. But the deterioration in the credit market marches on. And that is all that matters… 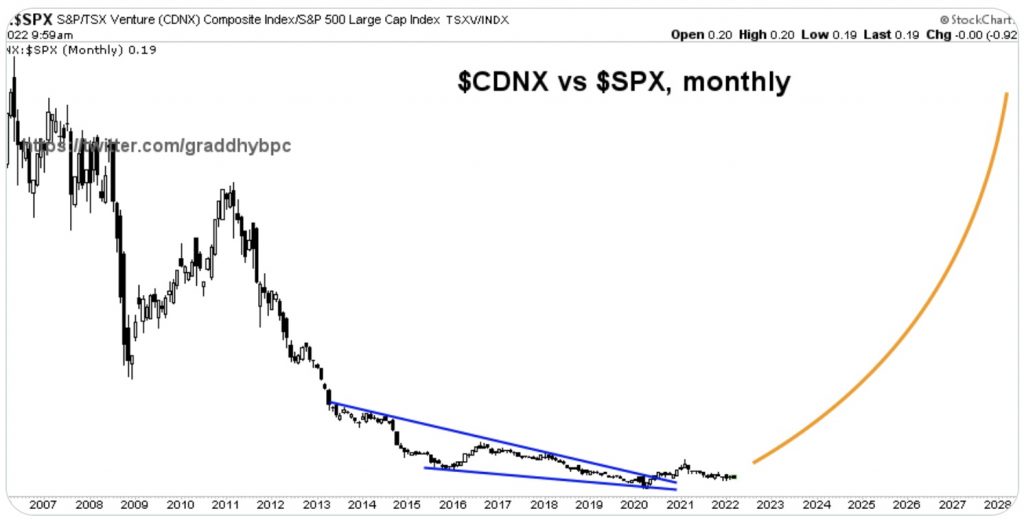 Inflation
Peter Boockvar:  Pre war information, the February PPI rose .8% m/o/m after a 1% increase in January. That though was one tenth less than expected. The core rate was higher by .2% m/o/m following an .8% gain last month and that was 4 tenths below expectations. Versus last year, headline PPI is up 10% and the core rate by 8.4%. 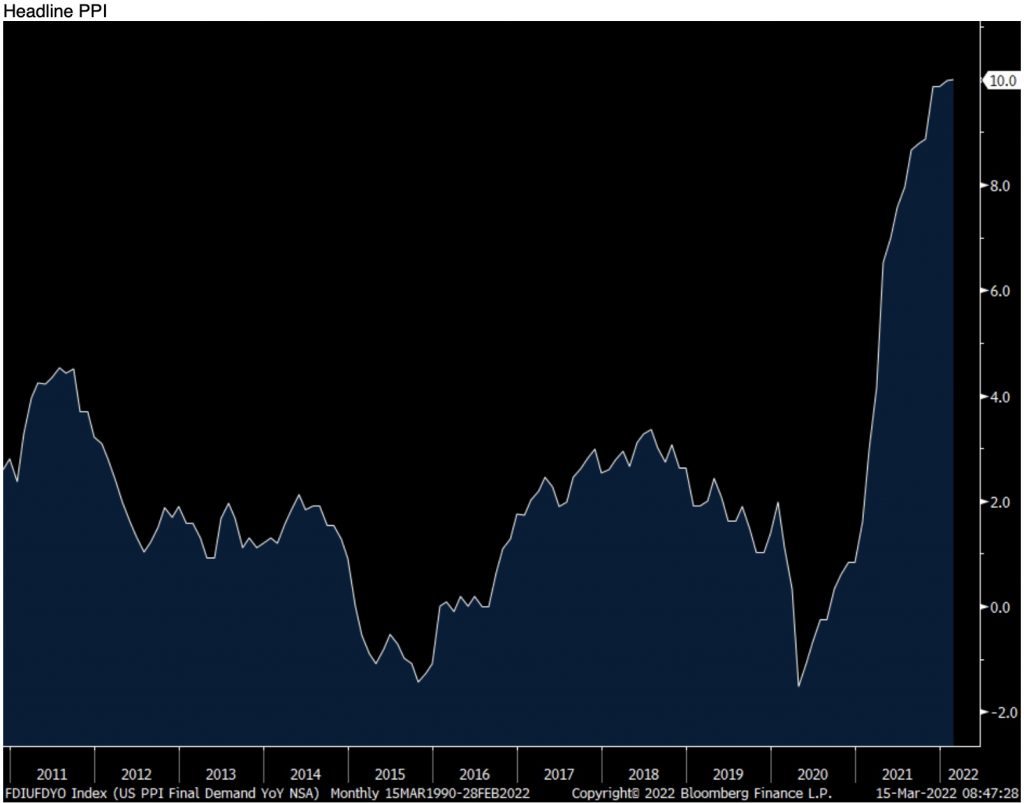 Almost 40% of the final demand for goods PPI gain was due to a 14.8% rise in gasoline prices while other fuels rose as well.

Inflation In The Pipeline Is Still Hot
Inflation in the pipeline is still pretty hot. … core processed goods are up by 23.3% y/o/y. In the stage of production prior to this, for unprocessed goods, prices rose 1.4% m/o/m after two months of declines and are higher by 35% y/o/y.

Bottom line, I don’t know the exact cut off in terms of when all the February data came in but assume it really didn’t capture the commodity spike in response to the invasion. Thru yesterday in March, the CRB raw industrials index has risen by another 2% over the past two weeks and the CRB food index is higher by 3% from February. As for the core PPI miss relative to expectations, we’re splitting hairs here as it was still up 8.4% y/o/y and tomorrow the Fed will take the fed funds rate to a whopping level of .25-.50%. This all said, I was of the opinion that pre war the extreme of the supply chain pressures had been reached and would begin to ease, also helped by a slowdown in the pace of demand for consumer goods. While I’m even more confident in the latter, I’m much less certain on the former.

The March NY manufacturing index fell into contraction at -11.8 from +3.1 and that is well less than the estimate of +6.4. It’s the first time below zero since last June. 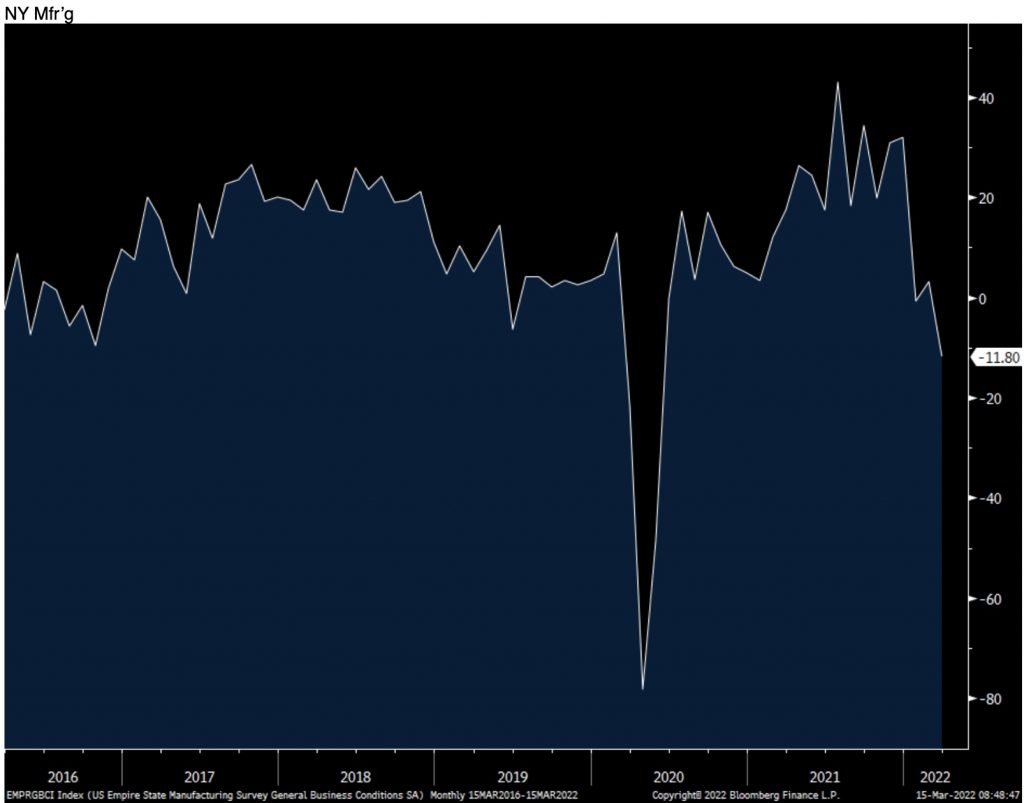 Prices paid fell a touch to 73.8 from 76.6 but those received rose to a fresh record high dating back to 2001 in this survey. 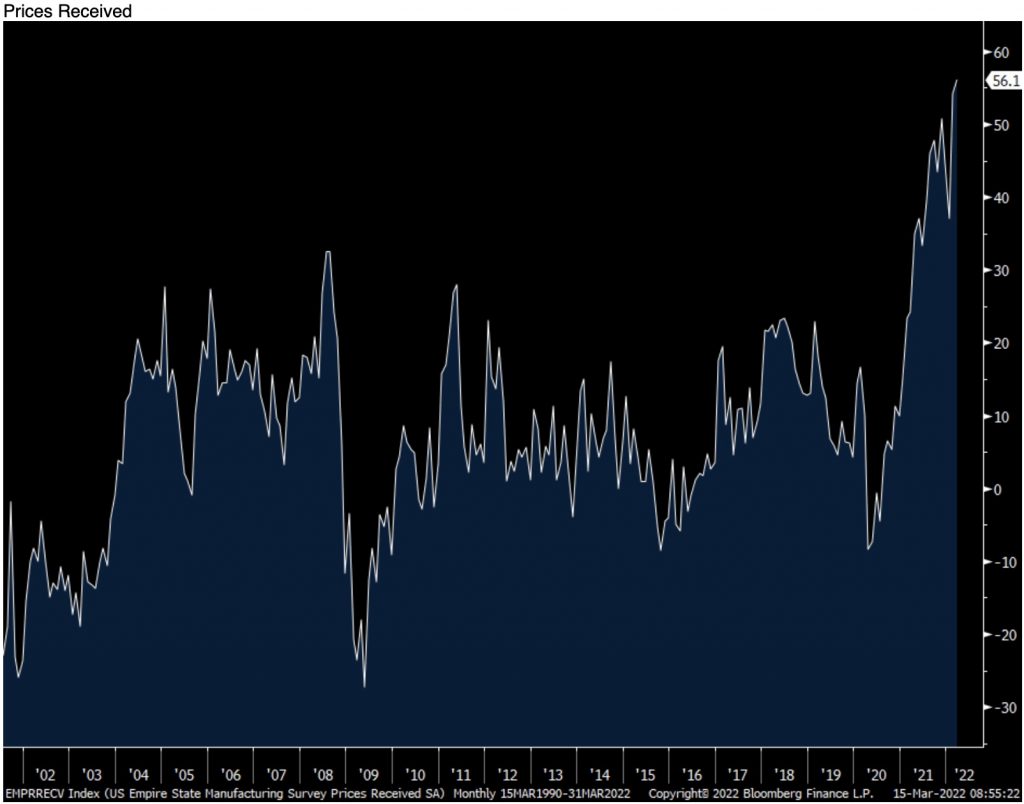 While the headline number fell sharply, the 6 month business outlook did improve by 8 pts to a 4 month high with a lift in new orders, backlogs, inventories and employment. Supply worries though picked up as expectations for Delivery Times doubled and prices paid and received both rose. There was moderation in expectations for capital spending.

Bottom line, this number is the very 1st March industrial figure that we see and the war impact is immediately obvious. Manufacturing was challenging enough before the war in terms of the supply/demand mismatch and high inflation but now it’s even more difficult.

Ahead Of The Fed Tomorrow
With respect to the Fed and ahead of tomorrow, unfortunately not enough people appreciate how far of an impact their policies reach indirectly. We know they blew another bout of major home price inflation with a 20% y/o/y price gain at its peak via historically low mortgage rates and the huge buying of MBS but it now goes further. In yesterday’s WSJ, an article was titled “Rent-Control Bills Advance as Housing Prices Surge.” So because the Federal Reserve has made housing unaffordable for many, rent control in more cities might get passed which then leads to even less supply and ever higher prices for shelter. The first sentence of the article, “Lawmakers across the US are looking to enact rent control, reviving measures largely shunned in recent years in an effort to curb the surge in home rental prices throughout the country.”

Meanwhile, Look At This Collapse
Finally of note, the German ZEW March investor expectations index of the Germany economy plunged to -39.3 from +54.3. The estimate was +5. That’s the lowest since March 2020 during you know what. It’s the biggest one month drop since this survey was created in 1991. The Current Situation component cratered to -21.4 from -8.1 but that was about as expected. Blame stagflation fears for both components. The ZEW said “A recession is becoming more and more likely. The war in Ukraine and the sanctions against Russia are significantly dampening the economic outlook for Germany. The collapsing economic expectations are accompanied by an extreme rise in inflation expectations. The experts therefore expect a stagflation in the coming months. The worsened outlook affects practically all sectors of the German economy, but especially the energy intensive sectors and the financial sector.” I don’t see how Europe doesn’t avoid a recession this year at the same time the ECB is ending QE and possibly trying to get out of negative rate land. Interesting times.

Nothing To See Here, Just A Collapse
In German Investor Expectations 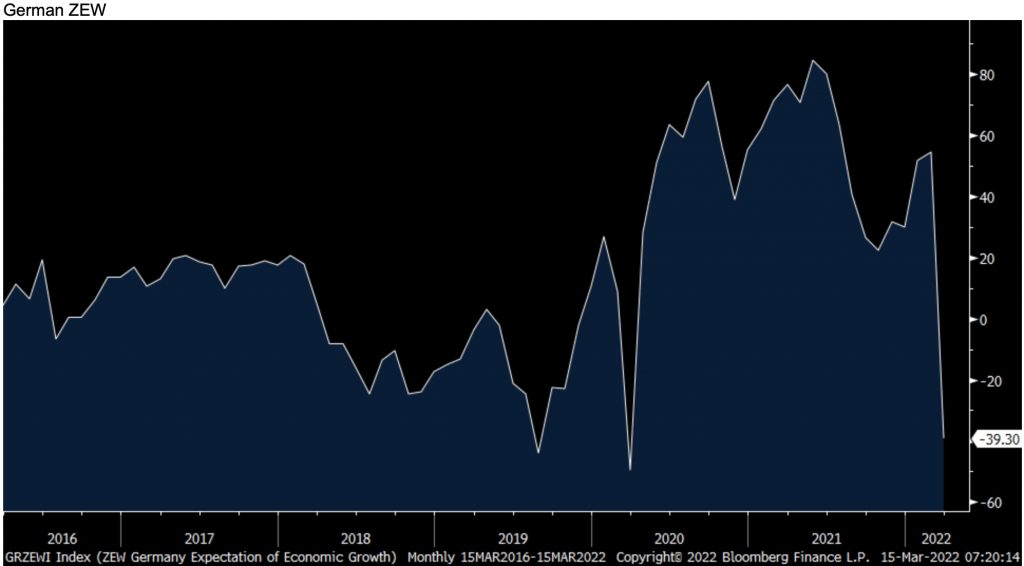